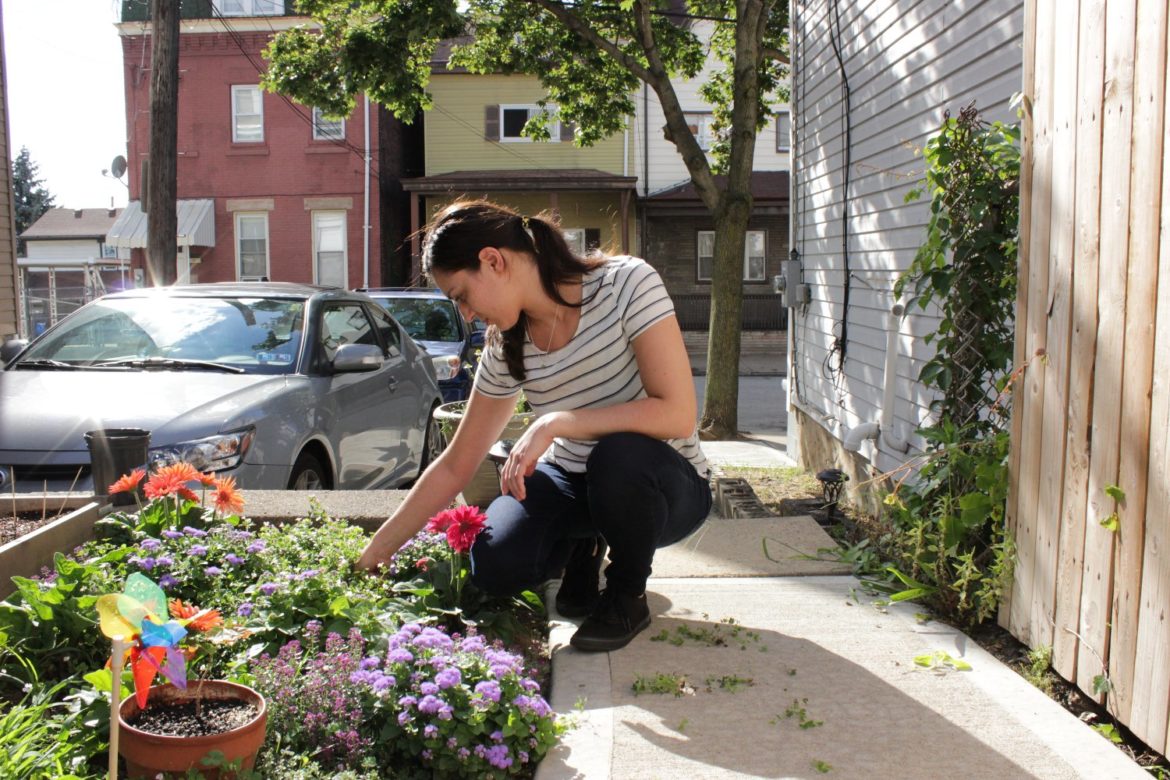 “It’s like swinging from Tarzan vine to Tarzan vine. One vine’s about to end and break, so you just grab the next one, but you’re never really putting your feet on solid ground,” said the 31-year-old Pittsburgh resident.

Living in her Lawrenceville home is only possible because her parents own it, and Shetter pays them as much of the mortgage and other expenses as she can.

The one major thing she could do to further her career goals — auditioning — has fallen by the wayside as she invests most of her time in serving jobs for small, but reliable, paychecks. She supplements that by cutting hair for up to 10 clients a month at home.

Many servers, like Shetter, earn Pennsylvania’s tipped minimum wage of $2.83 per hour. The standard minimum wage, both state and federal, is $7.25.

See which cities and counties have enacted wage increases in 2015.

Many believe the minimum wage hasn’t kept up with the times, and movements to raise it are being led by grassroots groups and governments in communities across the nation. In June, Los Angeles became the biggest city in the country to raise its minimum wage to $15 by 2020.

Pennsylvania isn’t part of this group – yet.

There are five bills pending in the state Legislature proposing to raise the minimum wage, with different methods and standards ranging from $8.75 to $15. Some politicians and business owners said they worry that putting this mandate on employers could mean fewer job openings and other cutbacks in the business community.

“If minimum wage is hiked, many of these jobs will vanish, or work hours will be drastically cut,” state Rep. Stephen Bloom, R-Cumberland, wrote in an email. “Employers simply find less costly alternatives, either through automation, technology or other means.”

Even economists, who also have opinions, disagree about the impact. Although some studies indicate a minimum-wage increase would cause job losses, other studies show just the opposite, said Sean Flaherty, the economics chair at Franklin & Marshall College in Lancaster.

“There’s just no strong consensus evidence that this is a significant problem when you have a modest increase in the minimum wage, done in stepwise fashion,” Flaherty said.

Several states, counties and cities are taking the matter into their own hands.

In Pennsylvania, the most ambitious proposed bill is from Sen. Daylin Leach, D-Delaware, Montgomery. His “One Fair Wage” bill  would raise the wage to $15 an hour and tie it to inflation across the board, for regular and tipped employees.

“There shouldn’t be a subminimum wage,” Leach said. “You cannot outsource paying your workers.”

The tipped minimum wage can apply to any employee — delivery driver, hair stylist, nail technician, busboy or bartender — who earns more than $30 or more in tips each month. If the tips don’t bring a worker’s wages up to $7.25, the employer is legally supposed to make up the difference, but some servers interviewed say that rarely happens.

State Rep. Patty Kim, D-Dauphin, also wants to raise the wage, but her bill calls for a more gradual increase. If passed, her bill would raise Pennsylvania’s wage to $9 and then to $10.10 a year later.

Another proposal backed by state Sen. Scott Wagner, R-York, would gradually increase the wage to $8.75 over the next three years.

And a bill sponsored by state Sen. Christine Tartaglione, D-Philadelphia, would bring the state’s tipped minimum wage to 70 percent of the regular minimum wage by 2016.

A fifth proposal specifically targets the wages of employees of long-term care facilities.

In a recent study conducted by the left-leaning Harrisburg think tank Keystone Research Center, 52 percent of nursing-home employees in Pennsylvania said they can’t support their families on the wages they earn.

Single mom Ashley Palmer, 29, earns $12.50 as a personal-care aide at Amber Woods at HarmarVillage Care Center, an assisted living facility in Cheswick, Pa. Her duties range from stocking linen carts to administering medications and helping residents use the bathroom.

“I have been doing doubles upon doubles because I’m just trying to make ends meet for my family,” said Palmer, who has three children. “With taxes and everything, my paycheck doesn’t even pay my rent and car payments together.”

Although Palmer said she would love $15 an hour, she worries the cost of living would just go up with it if all workers got the pay bump.

Leach thinks lifting everyone to $15 will at least provide for the basic needs in life.

“I’ve spoken with a dozen people who have two and a half jobs just to try and make enough to put a roof over their kids’ heads,” Leach said.

Many believe individual business owners should decide whether to pay workers more.

Christian Smith, co-owner of Bright Ideas Childcare and Preschool in Altoona, said a mandated $15 wage would force him to close his business. Currently, about five of his 19 employees earn $7.25, and the others earn more.

“Over time, and if they earn credentials, employees will receive higher wages,” Smith said.

Bright Ideas also helps cover training and education costs for employees who want to earn more credentials, Smith said. If the minimum wage rises, he said the business would have to cut back on that support.

Alex Halper, director of government affairs for the Pennsylvania Chamber of Business and Industry, said small business owners are worried that mandated increases would mean losing the profit they’ve been able to hold onto in a difficult economy.

“Advocates [of raising the minimum wage] sort of present this false choice,” Halper said. “Either you support these significant increases to entry-level wages, or you don’t care about people in poverty.”

At Wigle Whiskey, a family-owned business in Pittsburgh that opened in 2012, tipped workers are paid more than twice the tipped minimum wage, said co-owner Meredith Grelli.

“It makes it worth it,” she said. “It makes however long I can be here, for whatever time, worth it.”

Wigle Whiskey is also planning to participate in a government-backed incentive program to increase wages.

In March, the Pittsburgh City Council approved the Market Based Revenue Opportunity Program, which is designed to encourage local businesses to pay above minimum wage in exchange for free promotion for their business.

Employers who prove they pay at least $10.10 per hour — or at least $3.93, for tipped employees — will get promotions on city-owned space, such as bus shelters and building walls.

Councilman Corey O’Connor, who introduced the program, said promotions could appear on more than 600 public spaces throughout Pittsburgh. He said the goal of the program is to increase wealth across the city.

“We actually have it on a sliding scale, so if the state were to raise our minimum wage, we’d raise our requirements as well,” O’Connor said.

As of publication, the city Department of Finance hadn’t received any applications for the program, which launched May 26. Grelli at Wigle Whiskey said she filed paperwork in mid-August.

“I don’t think $3.93 would make that big of a difference, to be honest,” said Kim Carroll, 40, a waitress at the Rum Runners Saloon in the North Hills of Pittsburgh.

Carroll, who’s worked in restaurants on and off since she was 18, said there’s no way she and her three children could survive on minimum wage without financial support from her family.

Because she typically works day shifts, she’ll often walk out with $20 in tips after a five-hour shift. That’s what she’ll earn in one hour at her other part-time job as a dance instructor.

“It’s awful. You can’t even buy a tank of gas for $20, let alone pay all your bills and take care of three kids,” she said.

Minimum-wage workers in 1968 were better off than the employees of today. The 1968 minimum wage of $1.60 actually translates to $8.54 after adjusting for inflation.

The National Low Income Housing Coalition estimates that in Pennsylvania, a worker needs to earn $17.57 per hour to afford to rent a two-bedroom apartment. A minimum-wage employee in the state would need to work about 78 hours per week to rent a one-bedroom place.

Derek Gower, 25, lives with his parents even though he earns a slightly higher wage of $12 an hour.

After Gower returned from a three-year stint teaching English to kindergarteners in South Korea and Vietnam, he got a part-time job at a grocery store in Berwick, a borough in Columbia County. He wanted to save money and start paying off his $15,000 in student loans.

“When I got my first paycheck, I just sort of had to laugh at what I was getting paid,” Gower said. It was about $160 for a week’s work.

The store wasn’t able to offer Gower full-time hours. He went looking for another part-time gig, which he found at a chip factory. But the grocery store wouldn’t work with his new schedule, so he left. Gower still works at the factory, clocking most of his hours on the weekend cleaning crew.

Gower plans to attend graduate school to study public policy at the College of William and Mary in Williamsburg, Va., later this month.

“Student loans are my biggest concern, but it’s OK because everybody has them,” Gower said. “Part of the reason I’m going back to graduate school is because I want to do something more fulfilling.”

Reach freelancer Molly Duerig at mollyduerig@gmail.com. Follow her at @MollyDuerig.