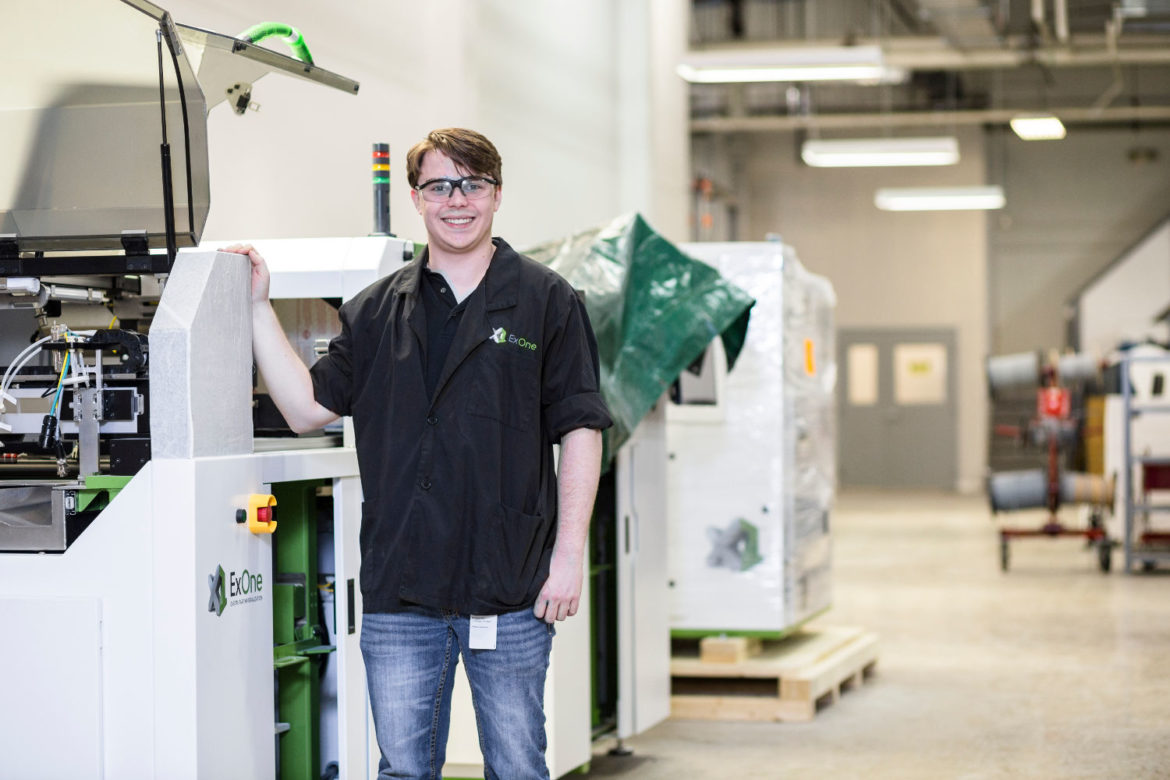 Max Inks attended Pennsylvania State University for three years before he dropped out, a decision prompted by his underwhelming performance in classes toward an electrical engineering degree.

He transferred to the Westmoreland County Community College, where he started taking courses in robotics and electronics. One day, a professor sent him on a tour of a 3-D printing manufacturing facility.

“I think this was a God-given gift for me to find this, and it’s literally in my backyard,” Inks said from the workshop of The ExOne Company in North Huntingdon, Pa., where he was hired four months after graduation. “No one outside of the industry truly knows that we exist in Pennsylvania, let alone the fact that we can print in stainless steel.”

Without realizing it, Inks, now 24, fell into an occupational sweet spot, one that he said he would have never known about but for his school setback and serendipity.

The Allegheny Conference on Community Development estimates that the working-age population in the region is composed of 144,000 more people aged 45 to 65, mostly Baby Boomers, than people ages 25 to 45 (the Gen X-ers and Millennials).

As Boomers retire over the next 20 years, the region's industries will need replacements for those who are currently working.

In some industries, such as advanced manufacturing -- which currently has one of the region's oldest workforces with more than half of employees in their 50s -- the gap is even larger.

For the industry to remain competitive, employers and recruiters in the field will need to step up awareness and curb appeal to attract Millennials who can fill the predicted “job gap” left by the Baby Boomers.

It will be an uphill battle. Millennials are constantly told that, to have a successful career and to support a family, that they must go to college. But do they?

A job in manufacturing typically doesn’t rate for the 18- to 34-year-olds of today. Most Millennials, almost by default, are graduating from four-year institutions.

It’s a decision that pays out over their careers. Pew Research says those with degrees out-earn those with only some college or a high school diploma by $15,500 to $17,500 annually.

What Millennials don’t know is that on-the-job training in manufacturing doesn’t automatically exclude the bump in pay that comes with a bachelor’s degree. More skill still means better pay, said Paul Anselmo, president of New Century Careers, a free training program for those looking to get into a skilled trade.

Along with training, many companies are offering to help pay for employees to obtain an advanced degree — making it possible to avoid the massive student debt that this generation has become accustomed to.

That support and the industry’s aging workforce have positioned Millennials to climb up the career ladder easier than ever before, Anselmo said.

But the stigma of a job in manufacturing is still hard to overcome. “You could tell them [about the opportunities] every day of the week … It just doesn’t register for some reason,” he said.

Anselmo said he believes the region’s future depends on gaining a younger generation of skilled workers.

“If we don’t, these companies will move somewhere else, and manufacturing is one of the biggest economic drivers in Pittsburgh and Southwestern Pennsylvania,” he said.

While the region is mostly known for the production of steel, manufacturing here is diversified. The three biggest areas of production are related to defense, aerospace and medical devices.

Pittsburgh-area companies produce the titanium and specialty glass that end up on military aircrafts, the tiny screws and plates that go into the human body, and the chemical coatings that end up on glass and other subsurfaces.

If manufacturers leave, it could mirror the decline of steel in the early 1980s, when 20-somethings left Pittsburgh in droves. This flight reverberated throughout generations, turning Southwestern Pennsylvania into one of the oldest metropolitan regions in the country.

Chris Briem at the University of Pittsburgh’s Center for Social and Urban Research (UCSUR) doesn’t see this harsh domino effect becoming a reality. In fact, he dismissed the predicted job gap as an issue at all; he said the American workforce is mobile and accustomed to generating competition to fill in the gaps.

He also points to both national and regional data that show an increasing number of Baby Boomers are choosing to stay in the workforce past retirement. A recent survey from UCSUR found that 42 percent of Allegheny County Boomers still in the workforce expect to retire at 66 or older.

Despite employers’ best efforts, news of the many available jobs and their perks aren’t reaching Millennials. It still seems like a gamble to commit to learning a trade, even at a time in the economy when law school graduates are struggling to find jobs.

Rob DiNardi, head of L & S Machine Company in Latrobe, Pa., faces this challenge every time he tries to recruit younger people to work as machinists in his shop, where they make the component parts that go into refueling nuclear power plants.

Manufacturing gets a bad rap; people expect to go home with dirt and grease embedded in their skin and eyes. DiNardi said Millennials and their parents don’t understand that it’s not always the grimy job it was in Pittsburgh’s steel-making heyday.

“If they came here, they would see it’s one of the cleanest places to work,” he said. “Their son or daughter can make a fair amount of money doing that, and we’re technologically advanced.”

He employs 100 people in his machine shop. In the last three or four years, he’s hired 10 employees ages 20 to 30. He also hires young apprentices through BotsIQ, a robotics competition for high schoolers that familiarizes them with manufacturing.

Most of his younger workers don’t come to him directly out of high school. He said they often have a year or two of college under their belts; they find out it’s not for them and then struggle at a low-paying job before they look for better benefits and a bigger paycheck.

That’s why Brian McDowell, 31, came to work for DiNardi about 11 years ago. He worked as an assistant manager at Walmart before he started work as a machinist. He enjoyed the discount retail job, but he wanted to see his bank account grow.

With on-the-job training and credentials, a machinist like McDowell can make up to $54,200.

And he’s not breaking his back, or dirtying his clothes, to do it. He said the TV portrait of a sweltering machine shop with sparks flying and exhausted, soot-covered employees is not his reality.

“At least our shop, I can wear a clean pair of pants and a white shirt and whenever I leave my pants are going to be clean and my shirt is going to be white,” he said.

McDowell said he would recommend a job like his to other Millennials entering the workforce.

“It really is worth it. Where else are you going to go at 20 years old, 21 years old and go be a machinist where they start you out at a decent pay?” he said. And it only goes up: “The more you know, the more you learn, the more you’re going to make.”

Correction May 19, 2015: This story has been updated to correct information shared by the Allegheny Conference on Community Development. Asked for the gap in the number of jobs, PublicSource was given numbers reflecting the gap in working-age population.

Reach Weenta Girmay at weenta@yahoo.com. Come back to publicsource.org for more in this series. See our previous story about Millennials here.