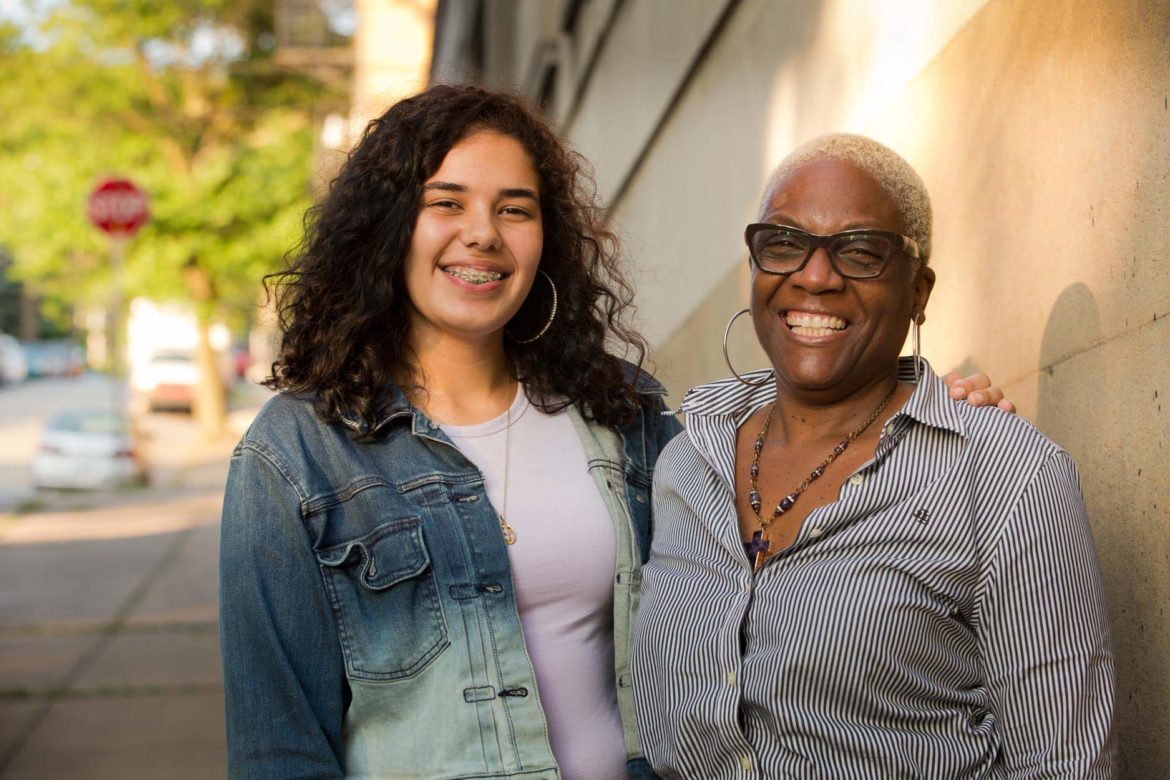 Tahlia Smith, 18, met her mentor Terri Shields, Hazelwood resident, in 2016 at JADA House, a local faith-based social ministry. They talked about having a personal strategic plan for life and developing positive self-talk. Tahlia believes JADA House is the reason she’s back on the right path. Shields is executive director of JADA House. (Photo by Heather Mull/PublicSource)

When Tahlia Smith entered high school in 2014, she was under the impression that high school was the place where teenagers learn how to become real adults. She was excited. She imagined she would learn how to develop a career and fill out her income taxes. Her teachers would be master thought facilitators. And she would undergo serious preparation for her future, both personal and professional.

Her actual experience in high school fell far short of that.

Classes intended to introduce her to experiments in science and literary classics fell flat. Little of the material felt relevant to her goals or what she was experiencing as a 14-year-old girl living in Pittsburgh.

Now 18, Tahlia recalls feeling like the structure of high school restricted her from pursuing her dreams of practicing law or becoming an author or journalist.

Having role models helped her break down the walls and envision her dreams as something she could truly attain.

One mentor was fairly inherent: her mom. But Tahlia had to learn how to accept what her mother had to say and what experience she was pulling from. She found another crucial mentor in 2017 at JADA House, a local faith-based social ministry. They talked about having a personal strategic plan for life and developing positive self-talk. Tahlia believes JADA House is the reason she’s back on the right path. Her hope in her future has been restored. 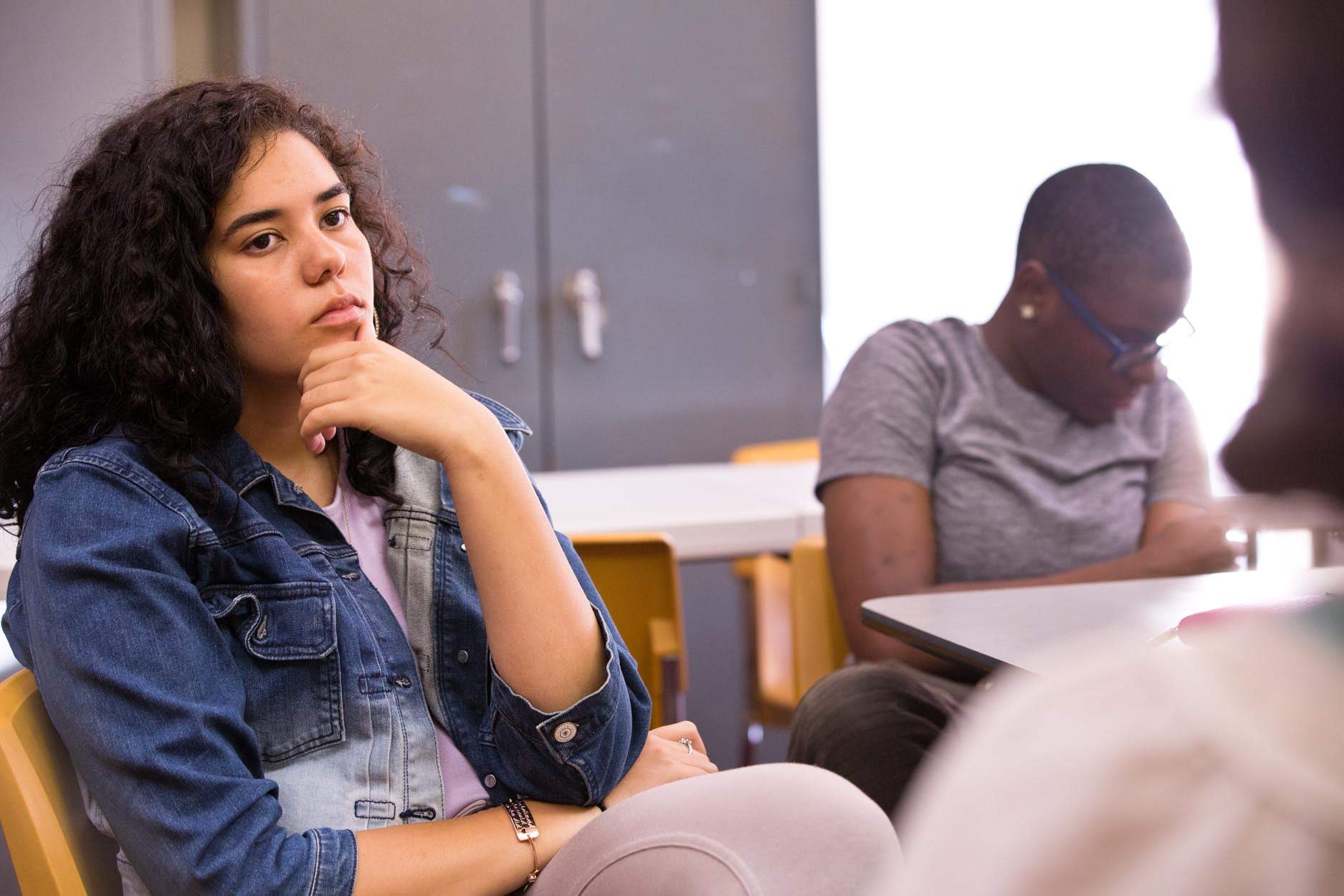 Strong relationships can be the difference between failure and perseverance in the process of life and learning. A 2015 study published in the Review of General Psychology suggested that mentors provide positive representation of different identities for youth and walking-talking inspiration for how possible it is to accomplish what they hope to do. A 2011 University of Georgia study found mentor relationships deterred youth from enduring hardships from at-risk behavior. Another study said mentorships can even increase the likelihood of a mentee attending college.

Tahlia said she thinks teachers should be more open to taking on this role with their students. “I would have never got off track,” she said. “I would have felt safer to talk to them about what I’m going through and how I can stay on track.”

Tahlia and her mother, Laci, moved to Pittsburgh right around the time Tahlia started elementary school. Laci believed the transition from Clarion, Pa., to Pittsburgh would be beneficial for both of them. Laci would find gainful employment in the information systems-technology sector and Tahlia would flourish academically and socially, falling right into the pipeline of homegrown Pittsburgh talent who attend Pittsburgh universities. She was encouraged and quite optimistic.

“But we’ve been through a lot,” Tahlia said.

Tahlia witnessed her mother struggle through two abusive relationships. Like any parent, Laci wishes she’d done a better job shielding Tahlia from what she experienced.

“I got caught up in a bad time in my life,” Laci said. “She saw things that if I could, I would take back in a heartbeat.”

Tahlia just wishes Laci would see what she saw:“...like see how beautiful, amazing, strong, powerful [she is] ... I think that would’ve definitely prevented you from a lot of situations,” she said to her mom.

Tahlia saw a lot of  examples of having high hopes, but then delivered in return was disappointment. By ninth grade, Tahlia was already overqualified to sit as a student in her health class. She was living out scenarios her health classes were too conservative to explore.

How to navigate disappointment with your parent wasn’t a chapter in Tahlia’s health class textbook. While her mother never strayed away from her responsibilities as a parent, she wasn’t meeting Tahlia’s need for an example of how to achieve safety and emotional security. But Laci, at the time, didn’t have that for herself. Her attempts at guiding Tahlia away from negative experiences was negated by the fact that these same negative experiences could be found in their home at times.

Here enters Terri Shields, a Hazelwood resident and executive director of JADA House. Advice and guidance from Terri felt easier to accept. Tahlia could see for herself a representation of a woman who’d endured challenges and turned her life around. 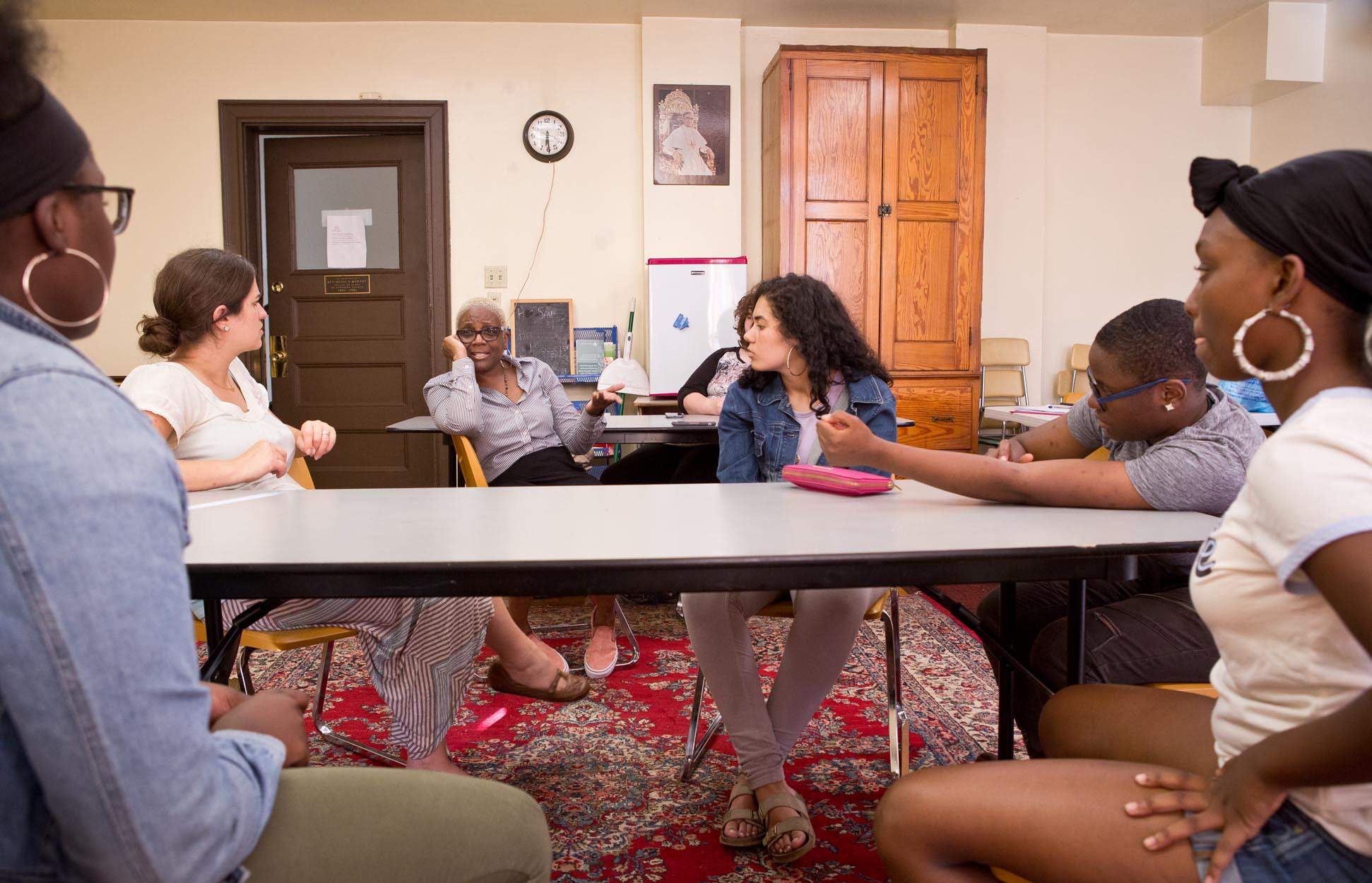 And never was the need for an objective, yet open mentorship model more pressing than when Tahlia was seeking a real-life education on sex, love and relationships.

In school, Tahlia couldn’t find a safe enough space to divulge her true feelings or to ask intimate questions. The closest thing to the safe space she needed was health class.

At home, the only thing Laci could do to protect her daughter was to try to steer Tahlia away from the drama.

Laci encourages Tahlia to pray and to work hard.

At JADA House, Tahlia found community — young women who looked like her and spoke like her and lived like her. It seemed like they were all looking for the same thing: to be heard and validated. Something “clicked” for Tahlia at JADA House, where they emphasize building strong self-esteem and emotional intelligence. And, to Tahlia’s liking, they even talk about career development and relationships. She has been visiting weekly for about a year.

The initial idea for JADA House came from Terri’s personal journey of healing and learning. It came to her when she unexpectedly had to become the primary guardian of three of her  grandchildren.

And, how do you get teenage girls to open up? Terri said, “Be real.” The first thing she did when she met Tahlia was to share her story.

After a few bad relationships, being arrested for theft and finding herself locked up in Allegheny County Jail, Terri decided to make some much needed adjustments in her life. But it wouldn’t be until she was diagnosed with lupus in 2008 that she decided it was time to start living life more authentically.

Terri adds that her own mother didn’t have the capacity to guide her through her own self-discovery. “I just thought I was supposed to find a job, cook and find a husband. ...I didn’t know whatTerri wanted for a lot of years,” she said of herself.

“...I feel connected to my younger self [and to the girls] because I was a young mom,” she said.“I didn’t get a chance to do a lot of things that young people do when they aren't supposed to be having children. So I try to connect in a way where I missed out.That’s how I reach them.”

She shows them that she’s a credible source. Reliable even. She shows the young ladies that there’s no shame in owning their experiences.

Terri knows that experimenting with drugs, falling in love and getting into mischief are all part of growing up.It’s not an if thing, but a when thing.

“I had to be open. I had to take myself back to where I was at and when someone didn’t teach me, and teach them,” Terri said.

Tahlia credited improving her grades to the relationship between her and Terri. The vision she held for her future was becoming clear again, and she finally felt safe enough to be optimistic again. 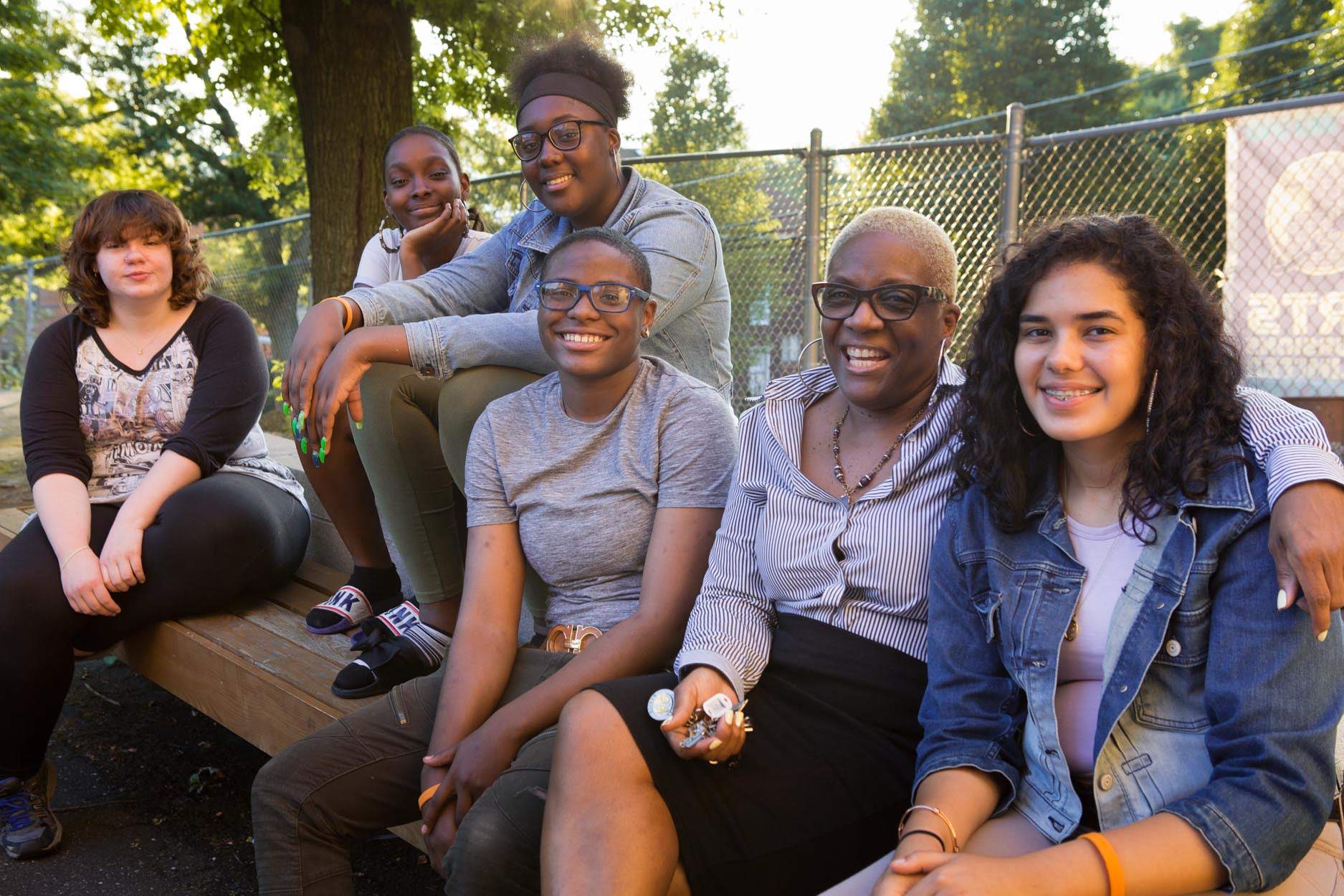 Tahlia thinks she could’ve easily fallen victim to the traps created by violence perpetuated in the media, antiquated heath classes and other risks to teenage girls, but she persisted long enough to find the right guidance. And she’s resilient like her mother. Even when their lives seemed irreparable, Tahlia and her mother always looked forward to better days.

“It’s all been a huge wake-up call,” Tahlia said.

Tahlia is now a newly minted graduate of Pittsburgh Allderdice High School.And as she’s come to find her voice, others are seeking it out. In April, Pittsburghers for Public Transit invited her to speak to the press and citizens during Pittsburgh’s P4 conference on equity and sustainable growth. In her speech, Tahlia advocated against Pittsburgh becoming a home for the Amazon HQ2.

The mentorship provided by Terri has empowered her to walk more confidently in her relationship with her mother, with herself and with the community around her. Each relationship is a motivating factor that feeds and relies on the other.

With this renewed perspective, Tahlia has found herself more active, volunteering her time in the community, working with senior-aged residents and seeking out opportunities to elevate the voices of girls like her.

“I’m passionate about telling the truth,” she said.

The story was fact-checked by Madeleine Davison.