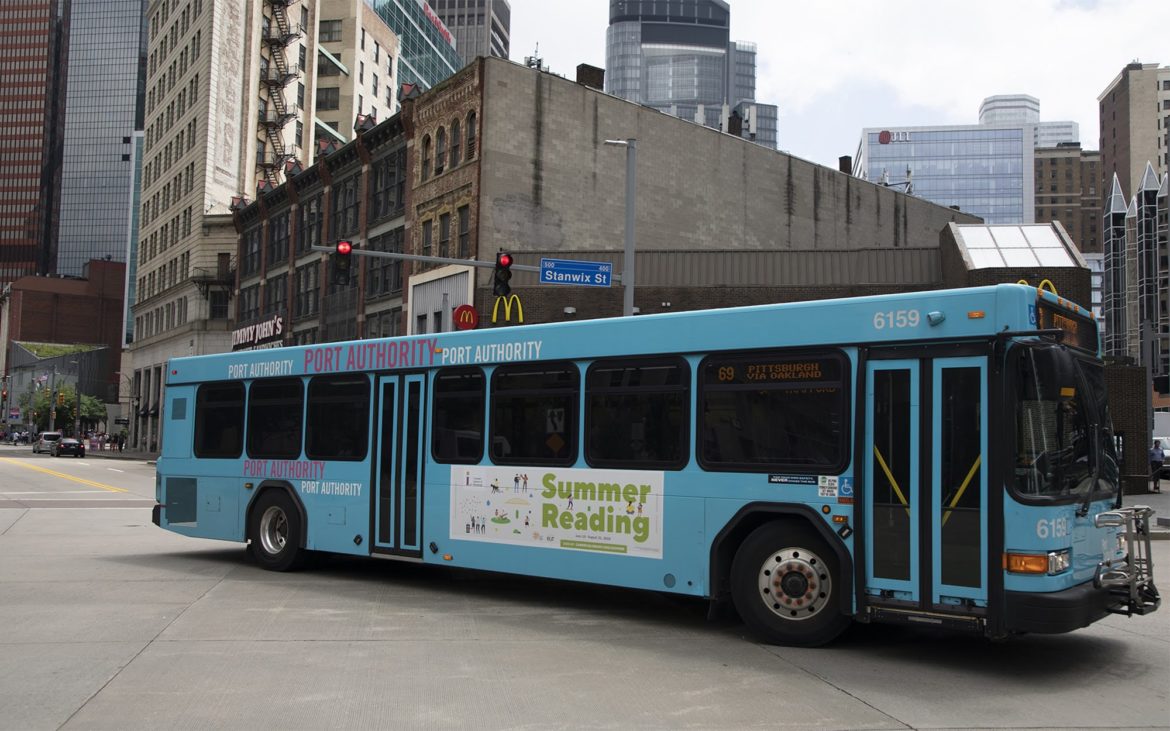 Editor's note: The author of this article, Jake Berman, is a New York City-based artist and cartographer.

Like most older American cities, Pittsburgh was built by the electric streetcar. In the beginning of the 20th century, mass transit in most American cities was a profitable business — one that was seamlessly intertwined with real estate development and electricity generation. Pittsburgh was no different. Its streetcar company, Pittsburgh Railways, was owned by the same company that owned Duquesne Light and Equitable Gas. But competition from the automobile and the construction of the Interstate Highway System led to the company’s long, slow decline. The remnants of Pittsburgh Railways system were bought out by the Port Authority of Allegheny County in 1964. Local leaders envisioned an ambitious new system, which never materialized, setting up the current light rail and busway system the city has today.

I built these maps to tell the story of what transit in Pittsburgh used to be, what it could have been and what transit might look like in the future.

The original idea for this mapping project came while I was stuck in a Los Angeles traffic jam about 10 years ago. Bored, I got curious about why L.A. didn’t have good public transit like the great cities of Europe or Japan. After a little research at the public library, I discovered that L.A. had an extensive light rail system before World War II, but that these rail lines had been abandoned after the war in favor of highways and buses. I decided to take it a step further and map the lost subway and streetcar systems of America. 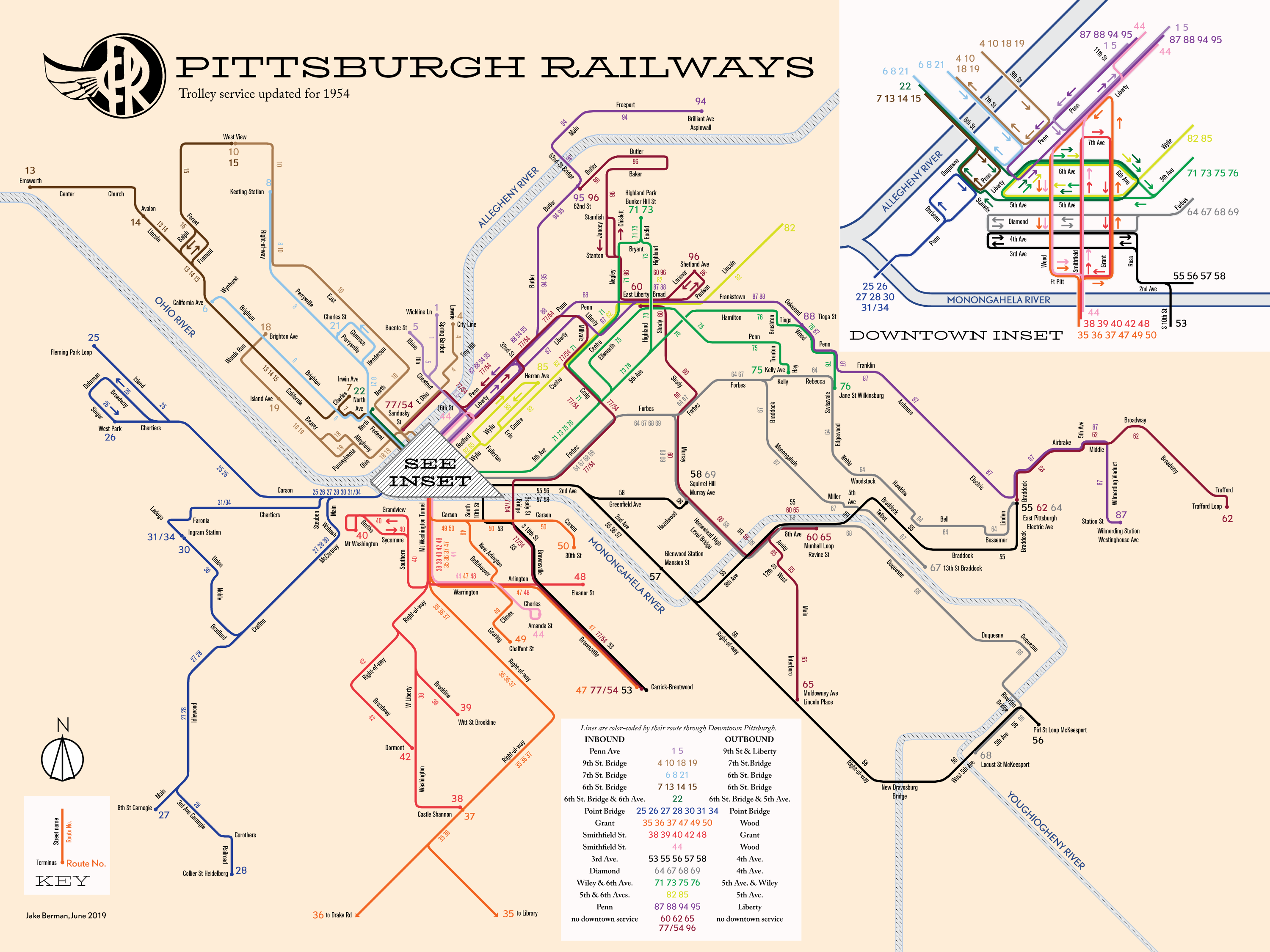 As befitted a city of Pittsburgh’s wealth and prominence, the streetcar system was everywhere in the first half of the 20th century. The system’s owner, Pittsburgh Railways, bought out its competitors in the first decade of the century, bringing all urban transit in the region under its monopoly. The company was a behemoth, but automobile competition and the Great Depression gradually hollowed out Pittsburgh Railways. The company declared bankruptcy twice, first in 1918 and again in 1938.

World War II provided a temporary respite. As the United States directed all its industrial might toward defeating Nazi Germany and Imperial Japan, gas and rubber were rationed, and public transit ridership skyrocketed. But this was not to last. White Pittsburghers began to depart the city en masse after the war, leaving the walkable neighborhoods of the city core for the suburbs. Overall, the city lost 10% of its population between 1950 and 1960. Pittsburgh Railways replaced several streetcar lines with buses in an effort to cut costs, but it was too little, too late. Pittsburgh Railways’ six-decade run came to an end in 1964, when the recently created Port Authority of Allegheny County took control.

The fate of Skybus 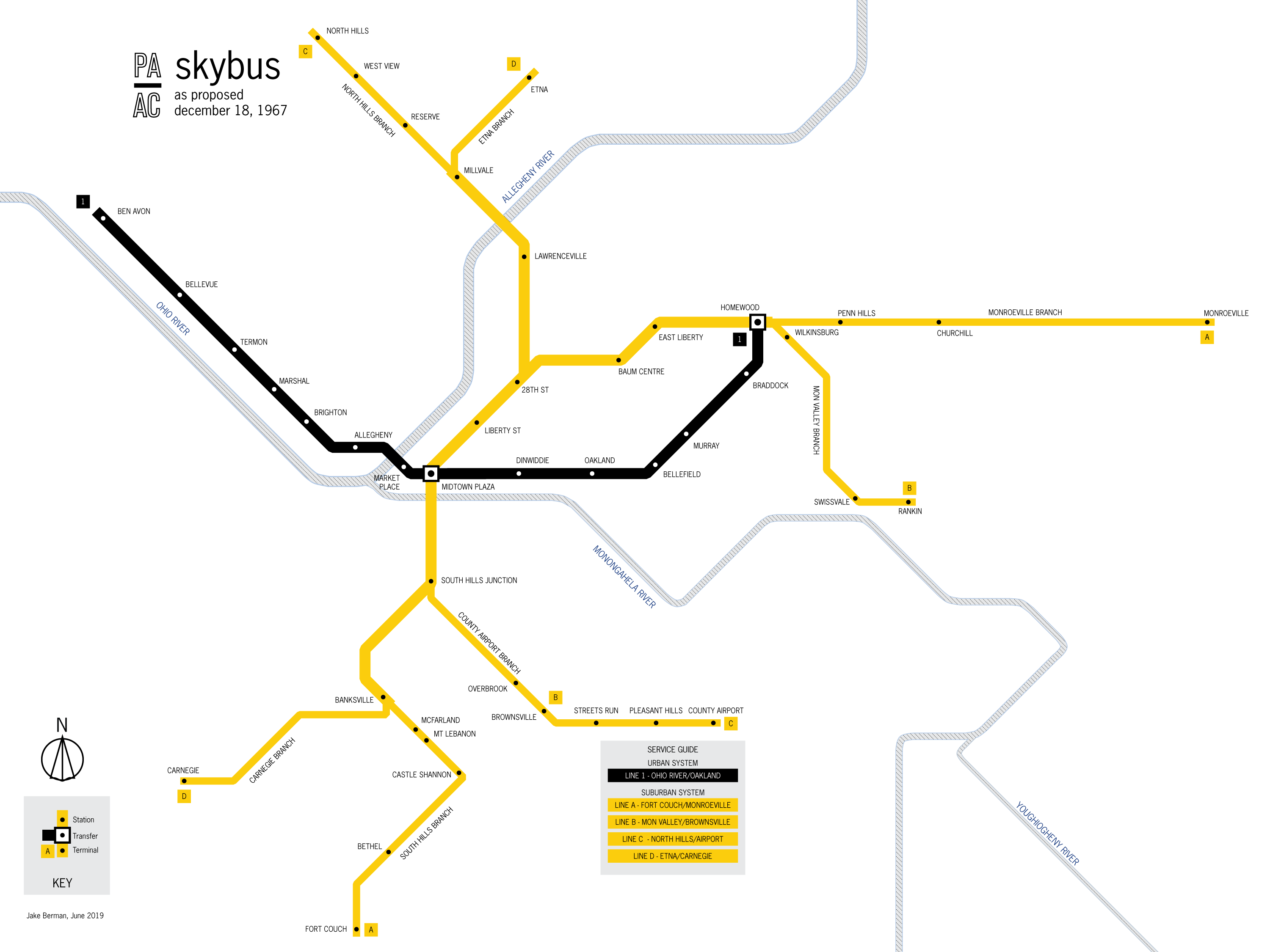 During the postwar boom, supporters of public transit in Pittsburgh realized that space-age technology could be used to make transit work better and get drivers out of their cars. The BART subway in San Francisco, the Washington Metro in D.C. and MARTA in Atlanta were all planned and built during this optimistic period. Pittsburgh, due to its geography, chose to plan a system called Skybus. But the project stalled, never making it past early roadblocks.

Unlike rapid transit systems that use steel-wheeled trains on steel tracks and have a human driver, the Skybus would use rubber-tired trains on a concrete track and be fully automated, not unlike the Pittsburgh International Airport People Mover. Skybus’ rubber-tired trains would have better hill-climbing ability than traditional subway cars, making it better suited to Pittsburgh’s terrain. The technology was first demonstrated in 1965 at the Allegheny County Fair in South Park, where fairgoers paid 10 cents each to ride the 1.77-mile test track.

Westinghouse, which developed the Skybus technology, worked closely with Allegheny County commissioners to turn Skybus into a fully-blown mass transit system for Greater Pittsburgh. In 1967, the first-phase Skybus plan depicted here was published and, in July 1969, the Port Authority approved a more limited plan for submission to the federal government for funding. This vote touched off nearly a decade of political trench warfare. City Councilman Pete Flaherty, who served as mayor from 1970 to 1977, had opposed Skybus, alleging that the commission’s vote was the product of a backroom deal with Westinghouse. The fight led to court litigation.

The Skybus impasse lasted until the mayor, the county commissioners and other parties reached an agreement in 1975 to hire an independent engineering firm to determine what technology would work best for Pittsburgh’s public transit environment. The engineers’ report, drafted by the firm of DeLeuw, Cather and Co., led not to Skybus but to the busway and light rail system that exists in Allegheny County today. 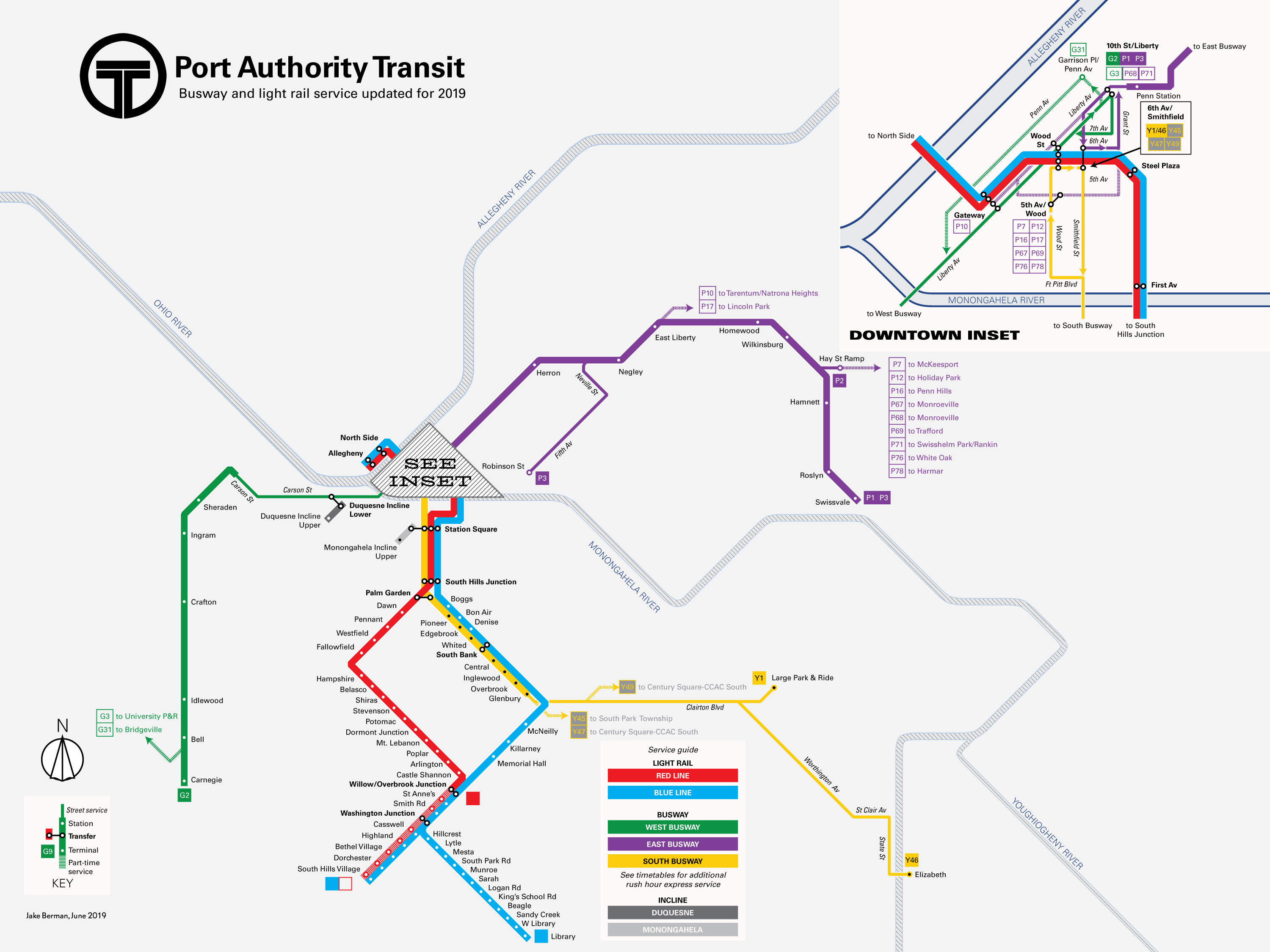 The modern T light rail and busway systems were built after the Skybus plan collapsed. Uniquely among American cities, Pittsburgh made an early commitment to making its bus system work by building the busway, a system of three bus-only highways that allows Port Authority buses to bypass congested roadways. The result is that 17% of Pittsburghers commute to work by mass transit, according to the U.S. Census 2017 American Community Survey — several points higher than peer cities like Cleveland, St. Louis and Buffalo.

In my opinion, the mix of local and express service on the busways is one of the few examples of bus rapid transit done well in North America. This is because the busways keep the buses from getting stuck in traffic, and they’re much more likely to run on time. To illustrate, Routes P1 and P2 operate almost exclusively on the East Busway, and they are notably more reliable than the Port Authority’s other routes: 73% of P1 and P2 buses run on time, 8% higher than the local average, according to the authority’s most recent ridership data. As for the T, its closest analogues in the United States are the subway-surface trolley lines in Philadelphia and the Muni Metro in San Francisco, all of which run as surface light rail in the residential neighborhoods outside of downtown and underground through downtown. 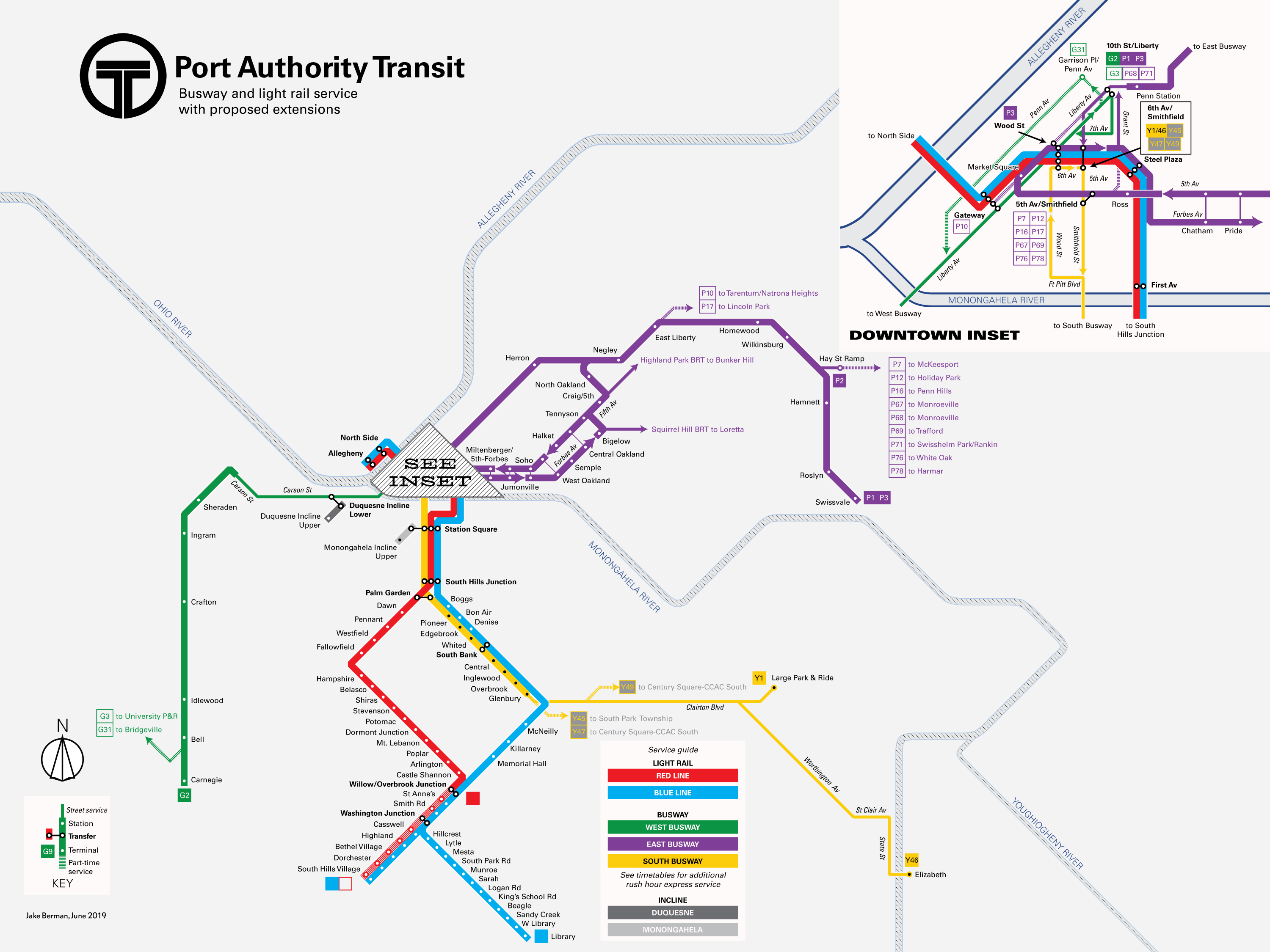 One major missing link in Pittsburgh’s rapid transit network is between Oakland and Downtown. Oakland is home to three universities, UPMC Presbyterian, Magee-Womens Hospital and the Carnegie Museum complex. But it has no rapid transit service connecting it to Downtown. During the postwar era, eight streetcar lines passed through Oakland on the way to Downtown until bus routes took over. Various ideas to extend light rail service to Oakland over the decades — including the $1 billion “Spine Line” proposal of the 1990s — failed to materialize.

The proposed Oakland Bus Rapid Transit project is meant to plug the hole, effectively extending the East Busway to Downtown by providing dedicated lanes on Fifth and Forbes avenues. This is intended to improve the reliability of the busy bus routes that run from Oakland to Downtown. In September 2018, the Urban Redevelopment Authority applied for $100 million to build the project. The Federal Transit Administration rated the project highly, and design is currently underway. If the project runs on schedule, the line should be up and running in 2022.

Broadly speaking, Pittsburgh’s transit history has followed the larger trends in American public transit: a large streetcar system, which was substituted after World War II, followed by a grandiose postwar subway plan that never got off the ground, leading to the construction of a modern public transit system that relies on the humble bus. But due to a mix of geographical limitations and innovative thinking, the Pittsburgh region’s bus and rail system has ended up being unusually useful and extensive for a city of its size.

The most common reaction that I’ve gotten from people who see this project has been disbelief. The maps of Pittsburgh Railways and Skybus look positively fantastical compared to the much smaller busway and light rail system that exists today. This is why I’ve drawn these maps in the first place. I want viewers to think of what their alternatives could have been the next time they’re stuck in traffic, the same way that I did.

Correction (10/4/2019): This story has been corrected to include additional information about the replacement of streetcar lines and the scope of Skybus.

Jake Berman can be reached at jake@fiftythree.studio, at @fiftythreestudio on Instagram or on the Web at http://lostsubways.com.