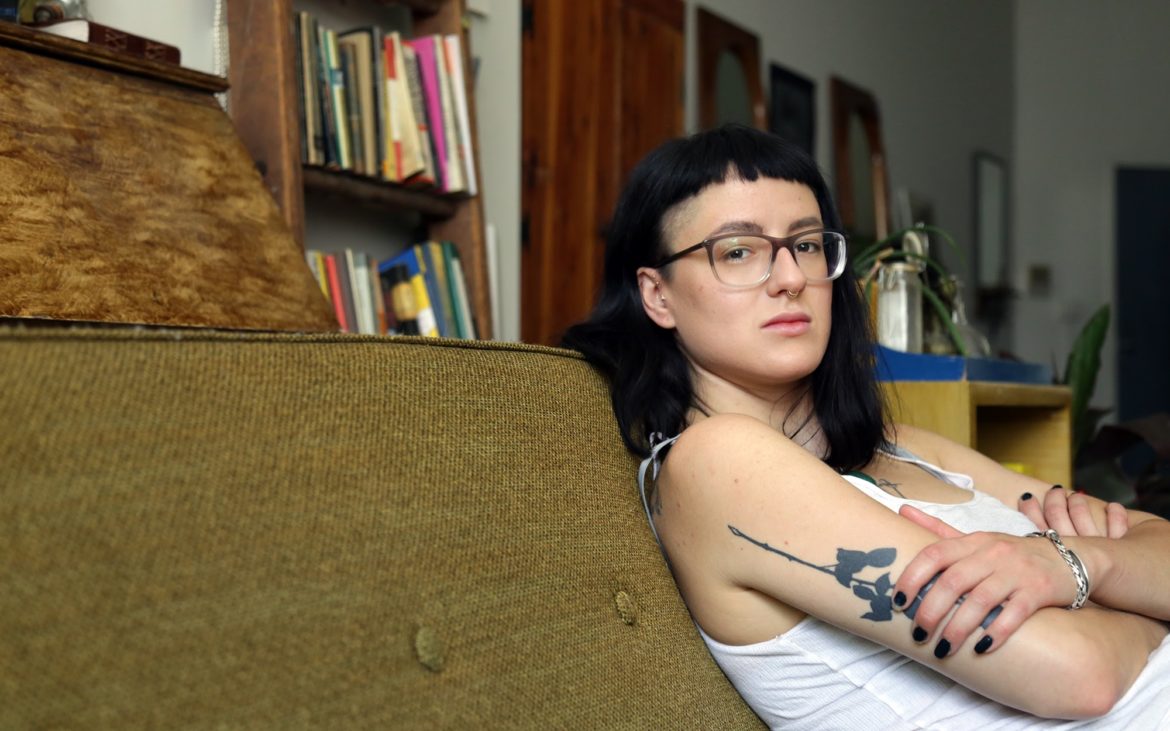 Kristen Staab was diagnosed with Lyme disease in 2015, but as the 28-year-old details in this essay, she’s been coping with debilitating symptoms for years. (Photo by Ryan Loew/PublicSource)

Perpetual exhaustion. Joint and muscle pain like the worst flu I just couldn’t shake. Struggling to stay focused. Symptoms began to stack up, making day-to-day living that much harder. I canceled plans, upped my caffeine intake. Took myself to the ER when weeks turned to months.

Prior to 2012, when I was still working on my undergrad degree, I had tension headaches and vertigo so severe I often felt like I would lose my balance while waiting for the bus on my way to campus. There were morning classes I missed altogether my senior year in college. I chalked it up to sleep deprivation, normal issues for an overachieving student.

I experienced nerve pain in my face (trigeminal neuralgia, I would later learn) that would cause my vision to blur and the left side of my face to feel like it was on fire. Whatever was happening to me was making it harder to live in this world. Increasing food sensitivities, worsening allergies and colds and flus that would linger for weeks or months.

If I had put it all together sooner, I may have remembered pulling a tick out of my hair at 13 while in the shower during a family vacation. Or I may have thought more critically about the bite on my leg that looked like a bullseye the summer after graduating, when things seemed to get much worse. I may not have shrugged off my growing inability to go for long runs. At any point, I may have considered Lyme disease as a more serious possibility if I had been informed about the nature of the illness, it’s low-level but virulent progression — and I may not be in the position I am in today. Kristen Staab has a plea for people who are unfamiliar with Lyme disease: "We need those who are well to wake up. Inform yourselves. Fight for those, like me, who are losing the ability to advocate as fiercely as our spirits might command." (Photo by Ryan Loew/PublicSource)

Lyme disease didn’t make the list of things to rule out early on; in fact, I’d never heard of it until I was well into what’s considered the “late Lyme” stage of illness. Then it was not often thought of, but even now, it’s still considered a rare infection. If I had known more about Lyme, perhaps I would have kept my appointment with a specialist in 2013 when it came up as a potential source of my symptoms during one of my online searches. But I didn’t have health insurance and the appointment alone, before blood work, would have cost hundreds of dollars, money I didn’t have working as a waitress. Regrettably, I also dismissed the idea when a coworker freaked out, claiming she had "Lyme’s,” with the dreaded possessive tense added. It is “Lyme” disease, discovered in Lyme, Connecticut. It is possessive, though.

I was finally diagnosed with the singular disease and several of its coinfections at the end of 2015 after seeing a slew of doctors, including a rheumatologist who’d had the sense to do the precursor test to the better known Western blot, the ELISA test, which showed antibodies to Lyme in my blood.

Five or 15 years into this illness (I’ll never know, but I suspect it’s the lengthier one), I’m trying to piece together the history of when and how it has affected me. I had my first appointment with a second LLMD (Lyme-literate medical doctor) on June 14 as the first one provided me little more than a diagnosis and an, “I’ll see you in six months.” I made the most recent appointment nearly a year ago, the length of time it often takes to be seen by many LLMDs, who have more patients than they can reasonably treat.

With my current condition and lack of early treatment, there is much that suggests I will continue to get worse. There is no cure for Lyme disease. I hesitate to call it a disability, but it’s done just that; it’s slowly chipping away at the life I am trying fiercely to rebuild. This past month, I watched a nearly 10-year old documentary, “Under Our Skin,” which highlights the lack of awareness, politicization and life ruin that results from underdiagnosis, from the barring of doctors to treat worsening patients and from insurers’ refusal to recognize and cover treatment for chronic Lyme disease. These are just some of the supplements Kristen takes to mitigate her symptoms. While she has been on antibiotics for Lyme in the past, Kristen said she's now under the care of a new Lyme-literate medical doctor and is about to begin taking antibiotics again. (Photo by Ryan Loew/PublicSource)

The lack of awareness about Lyme disease remains much the same many years later, but the risk of infection continues to climb. Environmental changes and warmer winters position our region for a continuing increase of Lyme-carrying ticks.

During my worst days, I am scared for my life, haunted by the question of what kind of future might be possible for me when so much has led me to believe the worst is yet to come. I am worried for the individuals I continue to meet who are facing the same daily hell I am. I am frustrated with the invisibility of our illness, for the isolation and misunderstanding it has imbued daily life with. I am sad that the efforts I make in my own quest for recovery may not be enough, that whatever I could do is not within my already strained financial means or that the timeframe within which health is regained is long since expired. Ask anyone who is far into their treatment and they will tell you all it’s cost them: a quarter of a million, $850,000. When the system refuses to pay for our coverage, we will bankrupt ourselves, disgrace our own names, because what other choice do we have?

I do not have a primary care physician because most doctors I’ve tried to establish continued care with refuse to acknowledge the validity of my diagnosis. Recently, an infectious disease specialist who sent me for a brain MRI flat-out told me, “I can’t treat you.” She told me she’d sooner diagnose me with Multiple Sclerosis than Lyme even with a positive blood test.

The Lyme specialist who diagnosed me in 2015 gave me advice about dealing with the Lyme as it relates to my job. “Don’t tell them you’re sick. That makes you disposable.”

I am not a special case. I am not in the minority here.

"On nights like this, I find myself mourning the loss of my own life. I am afraid it’s too late."

It’s a dismal reality for those of us who try to cope with the vacillating, debilitating and spiritually depleting array of symptoms. I want, if nothing else, to affirm that this illness is only able to be ignored until it affects you or someone close to you. Then it’s a frantic, drawn-out, treacherous gamble with time. The odds for recovery are slim if it progresses to late stage, which is where I’m at, but what would you do—throw in the towel? I don’t expect to ever be back to 100 percent, but I know that if I do not advocate for knowledge and understanding, turn over every stone and plead for help from anyone who might listen, my chances for a full life are dwindling.

I found myself bawling over lost years as I wrote the first version of this letter. Years ago, my uninsured status compelled me to cancel appointments with the same specialists I am now waiting to see. On nights like this, I find myself mourning the loss of my own life. I am afraid it’s too late. That my neurodegeneration — which now exists primarily as an almost debilitating weakness, numbness and tingling in my hands and feet — will progress to the point where I will no longer be able to think this letter, let alone type it.

Lyme disease is not a myth. It’s misrepresented. It’s an unpleasant topic of conversation because there are no easy answers, but we who are sick must collectively fight for validation; for an open dialogue about this infection with the doctors we are supposed to trust; for the same fighting chance that any other sufferers of chronic illness are given.

We need health coverage and funded pro-patient research. We need those who are well to wake up. Inform yourselves. Fight for those, like me, who are losing the ability to advocate as fiercely as our spirits might command.

Kristen Staab is 28 years old. She is an aspiring writer who works in marketing to pay her medical bills and has a great love for life despite her challenges with Lyme. She can be reached at kristenstaab@gmail.com.