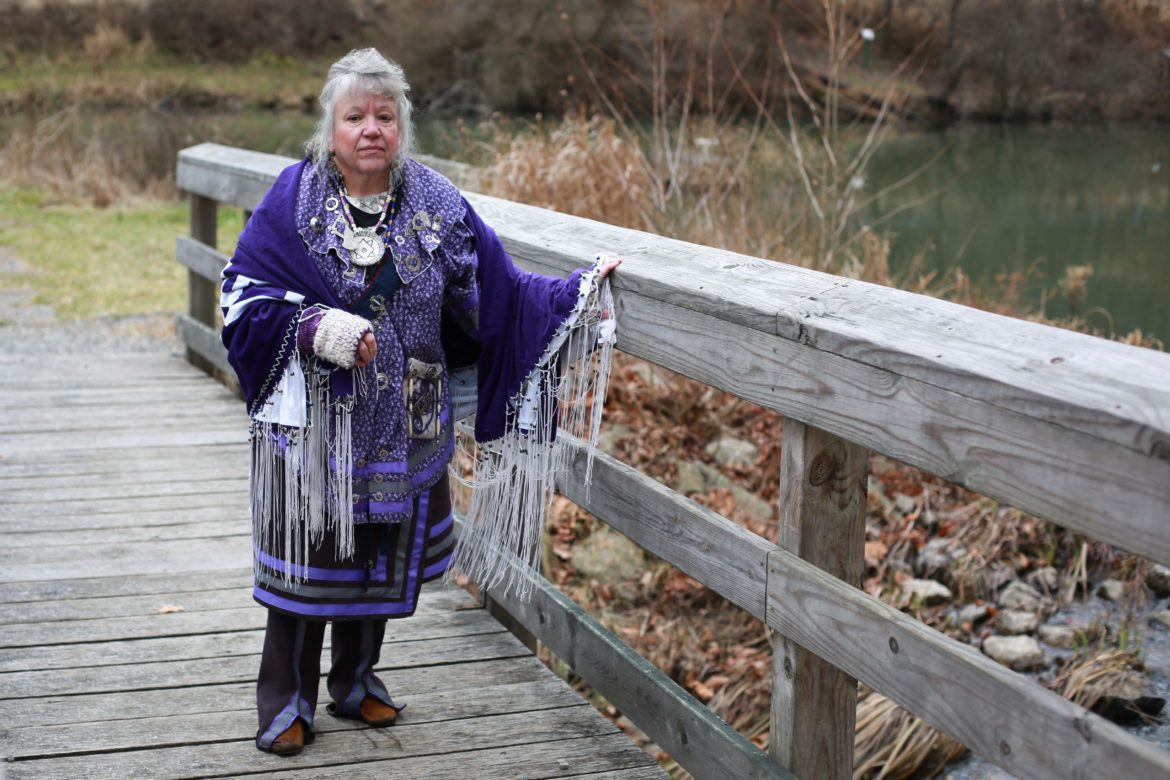 Lee Dingus poses outside of the Latodami Nature Center in North Park on Dec. 15, 2019. (Photo by Hali Tauxe/PublicSource)

In writing this, I am embarking on a “spiritual journey” into my own soul and the souls and spirits of other Native American women who have walked before me.

To know and understand Native American women, we must look at both our traditional and contemporary roles in connection to our tribes and society. The Haudenosaunee (Iroquois), who have always been located around the greater Tri-State area, believe that our culture stems from women. Many of our nations have and have always had women leaders, from Clan Mothers, Faith Keepers and Medicine Women to politicians. We have always spoken our minds at our councils, and our leadership was taken seriously.

I will be using the terms “Indian,” Native American, Indigenous or my tribal affiliation throughout the article. Native people prefer the use of their tribal affiliation over anything else, and the word “Indian” is not my preferred word, though it is the most mainstream term. Indian is a misunderstanding left over from when Christopher Columbus came to the so-called new world and thought he had found a new trade route to India, hence the misnomer “Indian.”

Growing up mostly in the South Hills of the Pittsburgh area, I had to be adaptable, flexible, resourceful and tenacious. Most of the places I lived were upper- and middle-class suburbs with a high population of mostly “white” people.

I have always faced many struggles for survival, growth and understanding and still continue to do so. My circumstances are always changing. Due to the lack of acceptance of the general population, I continuously have to strive to hold on to my traditions, values, customs and ways of life, such as honoring all things living and respecting the wisdom of elders. This is very ironic due to the fact that Pittsburgh is a city of immigrants who are proud of their ancestors, their past and their culture.

However, they are quick to dismiss my culture.

Stereotypes are one of the obstacles I face here in Pittsburgh. From the Land O’Lakes brand to Pocahontas, it seems Indigenous women can never be seen as everyday women. We are not viewed as real people. In many people’s minds, we are extinct. If you do not have long straight dark hair, high cheekbones or wear “Indian” clothing or braids, you can’t be “Indian.”

People look at me and say, “You can’t be real,” or say I’m only “part Indian” just because I don’t look like the stereotypes they grew up to know. People have said it to me hundreds of times. This is racism.

Sports teams, mascots, names and logos — such as the North Hills Indians locally or the Washington Redskins on a national level — are racist images that Pittsburghers and Americans hold onto that keep us locked in the past. These images are not an honor. They are harmful to our people and culture by creating low self-esteem and a negative self-image.

I do not understand why people cannot stop and listen to us and accept it when we say they are insulting. It is our culture you are degrading. When I reach out to such organizations, more often than not, I never hear back.

Sometimes I have to guard myself and hide from the outside world. The world around us demands that I be adaptable. I live in two worlds, two cultures — the “red” world and the “white” world.

I draw on my traditional resources, such as the elders and my inner strength to assert myself as a contemporary Indigenous woman and to move ahead on a career path of working in education. I had to adapt and blend into mainstream society and keep my identity buried inside myself, just so I could have acceptance. 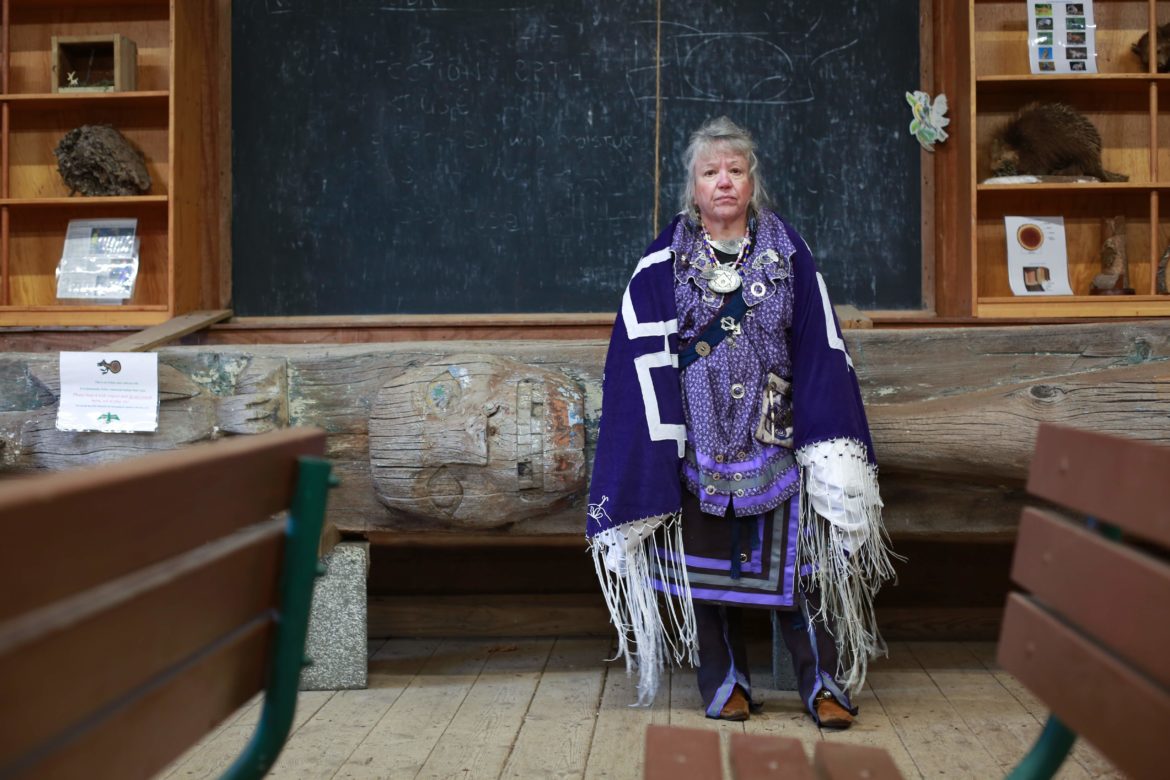 Lee Dingus poses with a Snohomish story pole in the Latodami Nature Center in North Park on Dec. 15, 2019. (Photo by Hali Tauxe/PublicSource)

In the past, I often buried my identity, so that I do not create a distraction, or undue racism, so that Native people would not be seen in a negative light. I have stopped doing that.

I worked for almost 25 years as a federal civil servant for Veterans Affairs, the Internal Revenue Service and the Social Security Administration. Over that time, I had co-workers during my almost 25 years as a federal civil servant say to me, “Enjoy your holiday,” around Thanksgiving or Christmas, for example. I would say to them “Enjoy yours, but thanks, I don’t celebrate the holiday as you know them.” These holidays are for the most part Christian and are not part of my tradition. But I do have traditional days I celebrate, mostly seasonal or harvest festivals. The answer I received the most from co-workers was, “Oh, I feel sorry for you.” They did not respond with, “Really? Tell me about those,” or “Well, enjoy whatever it is you do.”

Most people assume I’m Christian. When they learn I’m not, I’ve received negative feedback, such as being told I was damned to hell or would not be saved, with no effort from them to understand.

“In the past, I often buried my identity, so that I do not create a distraction, or undue racism, so that Native people would not be seen in a negative light. I have stopped doing that.”

At work, I have had to point out that I have always volunteered to work days they wanted off during those holidays, so they could celebrate their traditions, but when I asked for time off for my celebrations at different times of the year, I was met with resistance or lack of understanding. I was questioned as to why I needed time off.

Keep in mind these people knew I was Haudenosaunee. They did not care or even try to understand.

I now work for an international education conglomerate called Pearson Education. To a degree, I think I have found my niche there. This company embraces culture, lifestyles, acceptance and choices. Never once have I ever been questioned at my current job. I have only known acceptance.

I am part of the International Diversity and Inclusion Committee as a collateral duty of the job. That has made my current employment in Pittsburgh more bearable.

I take the responsibility of creating awareness and education seriously. I rely on the spirits or my ancestors to seek visions and give thanks to Creator to help me achieve awareness for Indigenous people.

As a woman of an ancient tribal culture, I must let the world know that we have important lessons to teach. The most significant lesson is the interconnection of all living things. The simple fact is that all of our existence is dependent upon the natural world, and we are rapidly destroying it.

Now that I am an “elder” and have more gray hair, I seem to be more accepted. In my culture, being an elder means I have moved beyond the time of giving birth to children and am seen as having lived long enough to have gathered some knowledge and insight from the world around us.

As a Native woman, I must be a forward thinker every day and use history, culture, and community as a solution for everyone's future. Every time I step into a classroom, to educate students and teachers about Native American Culture or stand in front of lectern, I have to tell myself, I must speak up and open up my heart for understanding to overcome stereotypes. My traditional cultural ways are lessons to share about the disconnectedness of all living things and to show how we all can become connected again.

“As a Native woman, I must be a forward thinker every day and use history, culture, and community as a solution for everyone's future.”

I recognize that I face a daunting set of problems and issues. There are continual threats to tribal sovereignty, low educational attainment levels, double-digit unemployment, substance abuse, human trafficking, murder and more.

Many in Pittsburgh default to seeing and considering only its Black and white population. It is very difficult to move people away from that narrow view. It is very difficult to live and be accepted in Pittsburgh if you are not from mainstream "white" culture, and minority groups that are not Black seem to be unacknowledged. More often than not, when you hear statistics on any subject, Native Americans are left out.

To bring Pittsburgh forward, I know I must participate and continue with the circle of life — birth, life, elder, then death —  from all four directions. I must be seen and heard. I must maintain balance, I must honor Creator and Turtle Island (the North American continent) and acknowledge and show respect to all. I will always open my heart and spirit to those who want to listen and become a forward thinker and not live in the past.

In closing, there is much to celebrate. Most Native people have strong connections to our past through languages, ceremonies and more. But most importantly, we will continue to exist as distinct cultures. Everyone must open up their hearts and minds and listen to what we have to say.

In seeking answers for today and tomorrow, we must pause and look at yesterday; I have been told to never forget. So I must remember the past and focus on the future. The future is the next seven generations to come, which means that if we think seven generations forward with every decision, we will always think about all those who will come after us, and those generations should do the same.

Lenora “Lee” Dingus is a Seneca/Haudenosaunee woman residing in the Pittsburgh region. She can be reached at aliyo@verizon.net.