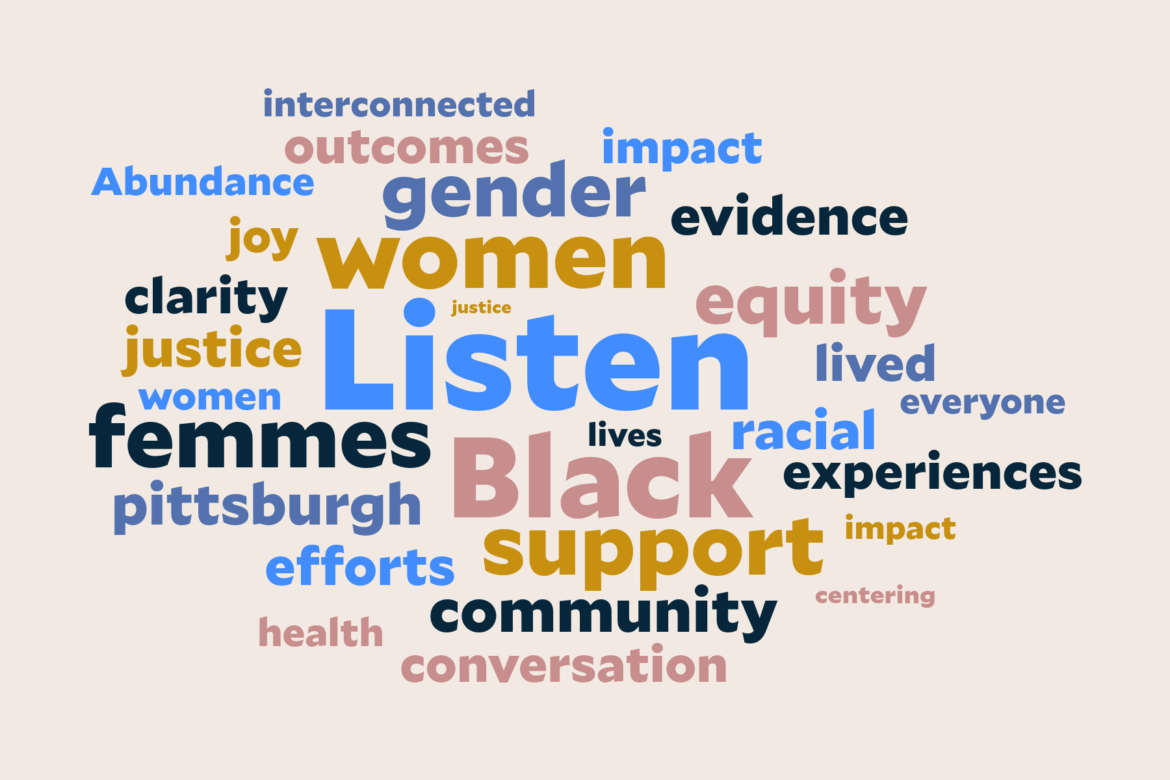 “Listen to Black women,” #SayHerName or #BlackLivesMatter are hashtags, mottos, words emblazoned in a bold font on T-shirts, social media posts or tote bags. For some, those words stay there, laying flat, as a two-dimensional way to feign support for women at the core of the culture, economy, politics and history of Pittsburgh and the nation as a whole. For many others — mostly Black women and femmes — those words are a way of life.

As COVID-19 persists, Black women are on the frontlines and forefront, if not on the front pages of newspapers. The systemic racial and gender inequities of this country including in health care are magnified due to the pandemic. In keeping with the etymology of apocalypse, the veil is being lifted and what we see is injustice.

Women’s Media Center, Essence Magazine and Lean In Foundation are some of the organizations that conducted research on the impact of COVID-19 on Black women, womyn and femmes in the United States. The Essence report released in May also shows the impact of Black women in America, who are disproportionately in high-risk, high-exposure jobs like store clerks and healthcare work: One in four knows someone who has died of the coronavirus, and 44% knows someone who has contracted the virus. Additionally, of the 1,048 respondents, 85% of Black women did not have the technology necessary to support educational needs of children in their care due to the move to online learning.

Early statements of “we’re in this together” and descriptions of COVID-19 as the “great equalizer” ring as hollow as “Most Livable City.” Pittsburgh is not a most livable city, as we see time and time again. After the City of Pittsburgh’s Gender Equity Commission released a report on race and gender inequities in September 2019, the swift and powerful response from the Black community focused on the erasure of Black women and femmes in the process. Although not initially intended to be a report on the “state of Black women” in Pittsburgh, due to the huge disparities faced by Black women, the report’s findings focused on Black women and how inhospitable the city is to our wellbeing on nearly every measure.

Since the report was released last fall, there has been little done at the city, county or state level specifically addressing the issues of creating true equity for Black women and femmes in the Pittsburgh region.

“We do this work from the heart because we live it … We laugh and cry about it.”

Both the city council of Pittsburgh and Allegheny County Council have passed a non-binding ordinance and motion, respectively, declaring racism a public health crisis over the past six months. The Office of Equity launched in 2019, which according to the City of Pittsburgh website, serves as the administrative liaison for the following City of Pittsburgh advisory groups, committees and commissions: Equal Opportunity Review Commission, Gender Equity Commission, LGBTQIA+ Advisory Council and the Welcoming Pittsburgh Steering Committee. The city recently announced plans to create an Office of Community Health and Safety.

“The Greater Pittsburgh Region does not care about the lives of Black women, femmes and girls," La'Tasha Mayes, the founder, president and CEO of New Voices for Reproductive Justice, said via email. "The evidence is not the Gender Equity Report. The evidence is our lived experiences.”

Mayes said that the "fact remains that the institutions in this region of all stripes — be it government, health or policy entities do not have the answers for Black women, femmes and girls, our families and our communities. Yet, these institutions must dismantle white supremacy, anti-Black racism and gender oppressions that create the shameful outcomes.”

Participants in the ongoing conversation about inequities, including in the media, should be aware of the push and pull that many Black women feel to not create additional trauma by reporting without context or excluding voices of the most impacted by the injustices of the Pittsburgh region.

Jada Shirriel, chief executive officer of Healthy Start, replied to questions over email, where she commented on the lack of input by Black women and femmes, although the report focused on Black women’s health and infant and maternal mortality. 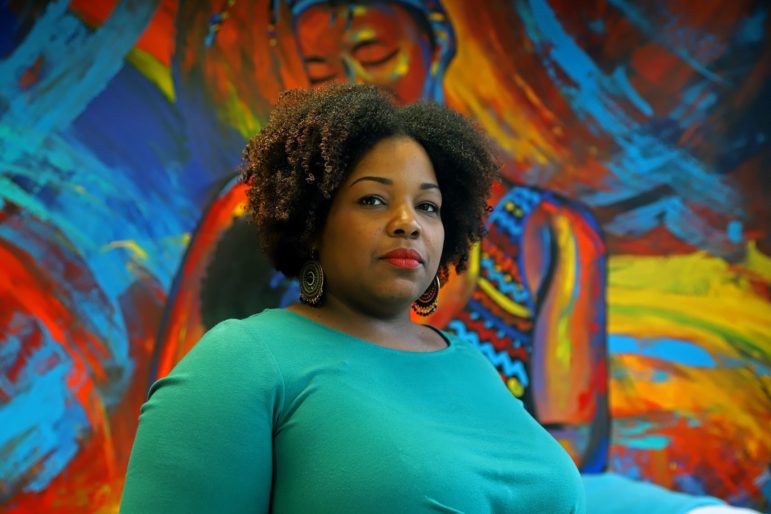 “We do this work from the heart because we live it … We laugh and cry about it,” said Shirriel, whose organization focuses on community-based healthcare for newborns and mothers. “We are in a fight to save ourselves, our mothers, our aunts, our daughters, our sisters. Equity for Black women is equity for everyone.”

While the Pittsburgh region is a challenging place for Black women to live, it is home. Improving the quality of life here is a priority.

"We need a narrative that presents facts but does not add to the undue burden and baggage Black women in this country already have to bear, " Shirriel said.

With that in mind, I hope to highlight some solutions put forth by reports cited in a community letter from New Voices Pittsburgh.

In December 2018, a report called Advancing Holistic Maternal Care for Black Women Through Policy; also known as Black Mamas Matter highlighted issues of reproductive justice for African American women nationally. The report is national in scope, and it focuses on the interconnected aspects impacting the lives of women, while centering Black women and femmes.

Some highlights of the report’s recommendations:

Another important report called Our Bodies, Our Lives, Our Voices: The State of Black Women in Reproductive Justice was finalized during the 2016 election and published in June 2017.

“Black women voters had clearly solidified behind a candidate we felt carried a progressive agenda...Today, we find ourselves in a new reality,” Marcela E. Howell, president and CEO of D.C.-based In Our Own Voice: National Black Women’s Reproductive Justice Agenda, wrote in the report’s introduction. “A man [Donald Trump] who ran one of the most bigoted campaigns since George Wallace is now in the White House. Worse yet, 53 percent of white women, a group we considered as allies, helped put him there...Consequently, our collective new reality is one of RESISTANCE. But resistance is nothing new for Black women."

Reading these reports sheds light on the legacy I am carrying, the responsibilities I have moving forward...

Howell, in an email, explained that the purpose of this report was to “lift up the voices of Black women leaders at the national, regional and state levels in our ongoing fight to secure reproductive justice for all women, girls, femmes, gender non-conforming and trans individuals.”

According to Howell, the report made waves for its perspective and focus. “We regularly have people tell us how nice it is to not have to parse out the data on Black women and girls from a broader document, but to have a report that is centered on our experience and the issues that impact our lives."

Black women have to write their own narrative and be at the center of research. Reproductive justice activists who focus on a “womb-centric” view of the issue fail to see the complete picture as it affects Black women and femmes. The “Our Bodies, Our Lives, Our Voices” report includes how intersectional issues of environmental racism, economics, education and food security, among others, impact a Black woman's ability to live as she chooses. The report states that Black women “includes cis, femme, trans, binary and gender non-conforming individuals.”

All 128 pages are worth reading, including the “Listening Sessions” part, which includes the voices of women in Pittsburgh on pages 18-19. The report’s stated recommendations include:

The report goes on to suggest several reforms that could be made to improve the lives of Black women and femmes.

Ideas for improvements include:

The report also speaks to the individual. The authors recommend we contact local reproductive justice organizations and become involved, learn and teach others about local regulations or practices that “restrict access to comprehensive, bias-free reproductive and sexual health for all.”

Growing up, I was taught that my existence was created through a complex system. I learned that I am part of a history and heritage of people from millennia past, with millennia to go. What I was not taught was that my body held specific power and represented a special place in the United States — a place that the country needed to become, survive, create, thrive but also feared — the presence of a Black woman.

I was not taught what the process of becoming a cis woman with the ability to reproduce another life form meant for me. It was unclear to me what rights and responsibilities I had to and for myself, including joy, pleasure, budding sexuality and security.

Reading these reports sheds light on the legacy I am carrying, the responsibilities I have moving forward and what I might be able to do to help create a future of equity. I don’t envision that future for only Black women but for everyone. In a white supremacist patriarchy — like the United States, like Pittsburgh — Black and Brown women and femmes are routinely at the bottom of priorities. We have to turn the desire for a level playing field into actual deeds.

Tereneh Idia is a Pittsburgh-based writer and designer. She can be reached at tereneh@gmail.com.