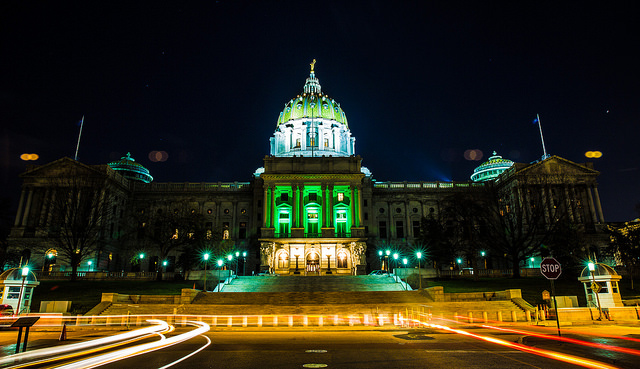 The State Capitol with green lights.

A flurry of legislative activity, an emerald-hued State Capitol and bureaucratic bickering flooded headlines this week. Here’s a breakdown of what’s been happening in Harrisburg:

To staunch the effects of eight months without state support, the Pennsylvania House of Representatives passed four bills related to school funding on Wednesday.

The money approved by the House for the University of Pennsylvania is earmarked for veterinary activities and the Center for Infectious Diseases, according to the legislation’s text.

The Senate will need to consider the funding before it’s released.

Gov. Tom Wolf said he plans to veto the most recent Republican-led budget proposal, chastising the right for presenting an “unbalanced” budget for the third time in eight months.

K-12 educators and state-related universities — Temple, Penn State and the University of Pittsburgh — are floundering without government funds, despite Wolf’s insistence that he’s fighting for schools. In a statement released on Thursday, Wolf said the math of the most recent budget proposal doesn’t “add up,” alleging that it creates a $1.6 billion deficit.

“I urge Republicans in the legislature to stop the partisan games and come back to the table to negotiate a final budget that funds our schools,” Wolf said.

The state’s lawmakers haven’t been able to compromise over education funding, but they’ve reached an agreement on medical marijuana. It just took a bit more than two years.

The House passed a medical marijuana bill 149-143 on Wednesday evening, after months of failed attempts by supporters. Senate Bill 3, which includes amendments that prevent business interference and dispensaries near schools, is expected to pass in the Senate. The bill already has support from Wolf.

Legalization will allow doctors and certified nurse practitioners to prescribe medical marijuana to patients suffering from a range of medical conditions including epilepsy, seizures and sickle cell disease.