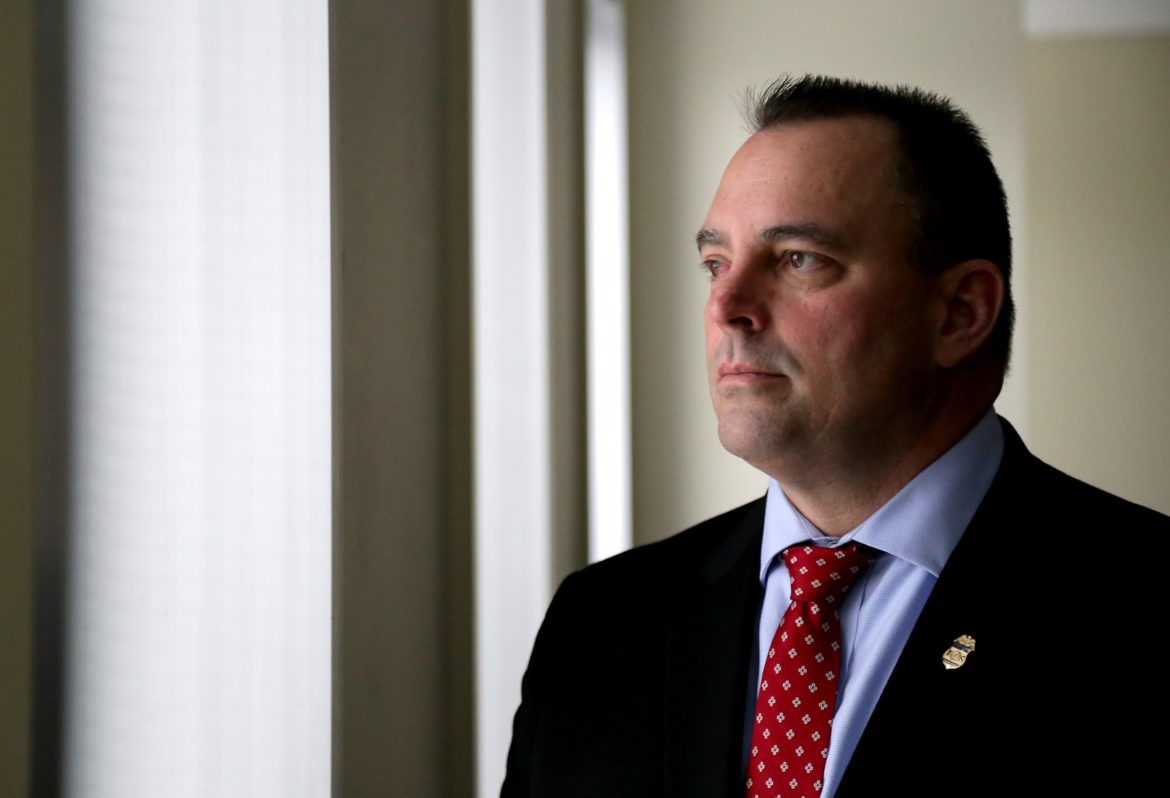 Louis Weiers is a resident agent in charge for the federal Bureau of Alcohol, Tobacco, Firearms and Explosives in the Pittsburgh field office. (Photo by Guy Wathen/PublicSource)

A Glock .45 is not a banknote. But for those in the deepest thralls of opioid addiction, it might as well be hard currency.

Addiction is what moves a gun from a family collection in the suburbs to places like Pittsburgh, where illegal guns drive violence.

“It breaks my heart sometimes,” says Louis Weiers, a resident agent in charge for the Bureau of Alcohol, Tobacco, Firearms and Explosives [ATF] in the Pittsburgh field office.

The agency doesn’t specifically track how many firearm cases are linked to drugs, but with an opioid epidemic wreaking havoc in Western Pennsylvania, federal and local law enforcement see an ongoing problem of drug users giving firepower to dealers.

If you’re addicted, trading guns for drugs means you’ll avoid crippling withdrawal for lack of heroin or opioid painkillers. If you’re a dealer, a trade means you’ll be armed, even if a prior conviction bans you from buying a gun yourself.

So what seems like an innocuous swap puts illegal guns on the street.

“People who are addicted of course have a very strong motivation to avoid getting sick,” explained Steve Kaufman, chief of the Criminal Division in the U.S. Attorney’s Office for the Western District of Pennsylvania.

A swap might involve a stolen gun or two. Sometimes it’s a larger scheme.

In 2014, a Beaver County man aided by an accomplice stole 53 handguns over six months from his family’s store, John Brown’s Armory. The guns, worth more than $15,000, were traded for heroin at an Aliquippa housing project. One gun later showed up on Pittsburgh’s North Side, the U.S. attorney’s office said.

“All the neighborhoods where you see a high level of drug trafficking, unfortunately that’s where the guns are going,” said Kaufman, speaking generally about the flow of guns.

But theft is just one problem. As the only federal agency authorized to run gun traces, much of the ATF’s work involves uncovering the origin stories of each of the 9,000 firearms recovered and traced yearly in Pennsylvania. Maybe the gun was lost or stolen, or illegally bought in a straw purchase, or else legally bought and eventually used for a crime.

Tracking is not streamlined.

Federal law prohibits the ATF from keeping any database of gun owners. No magic crime-fighting computer exists that can spit out the name of a big-time weapons trafficker and all the guns they’ve acquired.

Rather, traces typically involve a series of phone calls — and many times a slog through a labyrinth of paper files — at the agency’s National Tracing Center in Martinsburg, West Virginia.

Weiers, a 26-year agency veteran who’s built a bit like a linebacker in a black suit, illustrates the process like John Madden doing play-by-play at a white board.

To start, local police type in a serial number and other basic info into the ATF’s eTrace portal. That info shoots to Martinsburg, where the agency’s tracers start making calls.

First, it’s a call to Glock or some other manufacturer, who will tell the tracer where the gun first went after leaving the factory.

Say it goes to a wholesaler: Then the ATF calls that wholesaler and asks where the gun went next.

Say it’s a gun shop: Then the ATF calls the shop – if it still exists – and asks who bought the gun.

With a customer’s name finally known, agents in collaboration with other law enforcement try to uncover how the gun moved from what seemed like a legal sale to the crime scene.

One common scheme is the straw purchase. “Lying and buying,” to use a law enforcement rhyme.

If you have a clean record, you’ll have no problem clearing a background check at a gun shop, and the seller may see no reason to turn you away (though carrying a gun while addicted to illegal drugs actually is a federal crime).

Buying a gun for a dealer might seem like a petty sin, but it’s far more serious if a non-violent buyer is arming a shooter.

“It’s a doggone shame,” Weiers said of the influence of addiction, which seems to spread through all levels of society.

If demand falls, Kaufman said, gun thefts and illegal swaps would fall, too.

But in Western Pennsylvania, where even deadlier opioids are moving in, and with more than 600 overdose deaths reported last year in Allegheny, Beaver, Fayette and Westmoreland counties, there’s little sign that the grip of addiction is lagging.

Weiers describes gun trafficking like throwing leaves in a stream. They disperse all over, and you’re constantly chasing them.

What difference does it make to catch one and take a single gun off the street? Maybe that saves a life. Maybe not.

For the ATF, the end goal is to get trigger pullers locked up and hold their enablers accountable. That’s an endless grind, and Weiers compares the job to an old saying.

PublicSource's Stephen Caruso and Natasha Khan built the graphic in this story.