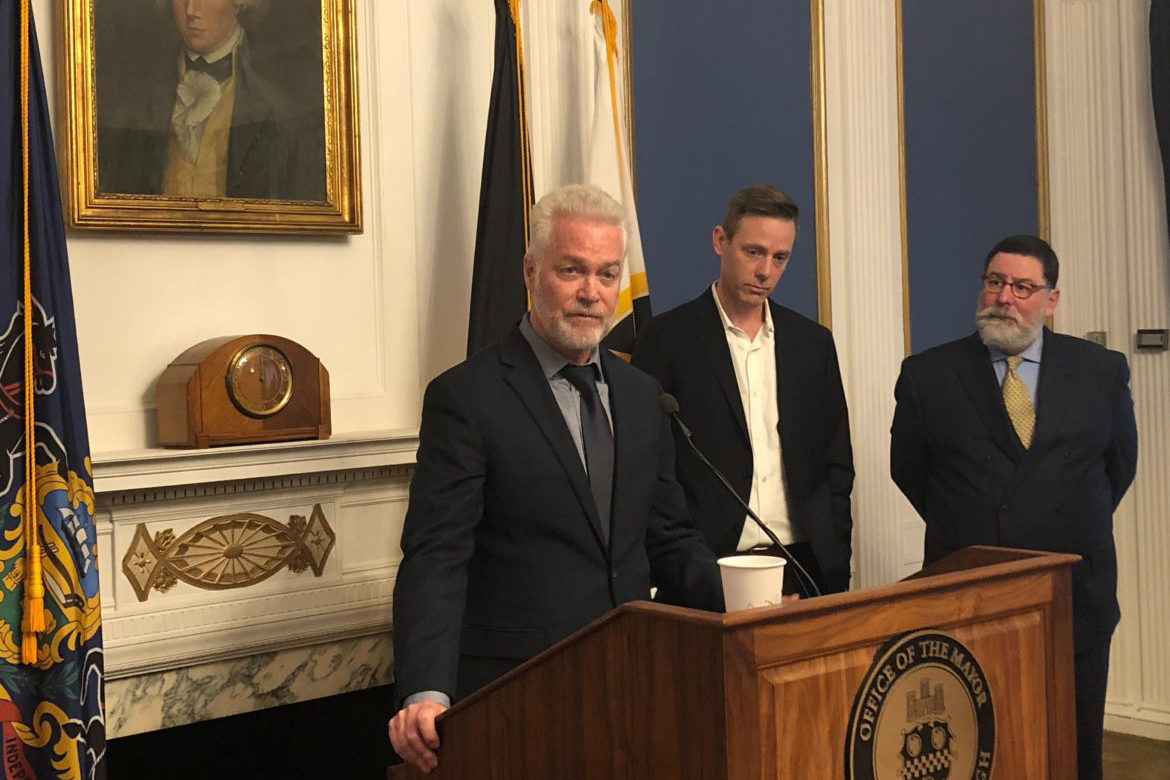 Greg Flisram, newly announced as the next leader of the Urban Redevelopment Authority, speaking at a Nov. 14, 2019 press conference with URA board chair Sam Williamson and Pittsburgh Mayor Bill Peduto. (Photo by Juliette Rihl/PublicSource)

The Urban Redevelopment Authority of Pittsburgh is getting its new executive director from the Economic Development Corporation of Kansas City.

A five-person committee that led a national search announced in June has selected Greg Flisram, the interim president and CEO of the Kansas City nonprofit focused on business and workforce development. The Urban Redevelopment Authority [URA] board approved Flisram's appointment at its Thursday afternoon board meeting. Flisram is expected to start Jan. 13.

Before the Economic Development Corporation, Flisram served as development director of the City of Green Bay, Wisconsin, and has worked in private sector development roles in Milwaukee; Grand Rapids; Muskegon, Michigan; Newport Beach, California; and Sugarland, Texas, according to a press release from the City of Pittsburgh and the URA.

“From this day forward, the economic development strategy of the city of Pittsburgh is forever changed,” Peduto said at a Thursday press conference. “It is now one that will focus on building a new economy for all and restoring our neighborhoods through housing and entrepreneurship in order to be able to see the full potential of the people that call Pittsburgh home.”

Flisram said he hopes to see Pittsburgh as a “national model, and even a test lab, for new ideas around affordable housing and economic equity and inclusion.”

In April, Robert Rubinstein, the URA’s previous executive director, announced his intent to step down. Interim Director Diamonte Walker has been leading the URA since Rubinstein formally stepped down in July. Walker, who joined the URA in 2017, has been named deputy executive director, effective immediately.

Williamson said Walker has the “leadership skills, the passion and the vision to be a part of a dynamic new leadership team for this city and for the URA.”

In Kansas City, Flisram has led an organization responsible for $1 billion in capital investment and the creation of 3,500 jobs, according to the press release announcing his appointment. In Green Bay, Flisram led the city’s riverfront development and advised the Green Bay Packers football team on development next to Lambeau Field.

The URA is a city agency focused on economic development and neighborhood investment. Among the URA’s main recent initiatives is the management of the city’s $10 million annual Housing Opportunity Fund.

Since its incorporation in 1946, the URA has played a major role in shaping development projects in the city. Currently, the authority’s role is in transition, and Flisram and Walker will be responsible for implementing recommendations from a strategic plan being developed by HR&A Advisors. The report has not yet been released, but will shape the URA’s development strategy and collaboration with city agencies, community organizations and other stakeholders, according to today’s press release.

Walker said Rubinstein will continue working on special projects for the URA.

Update (2:35 p.m.): This story was updated to reflect URA board approval of Flisram's appointment.