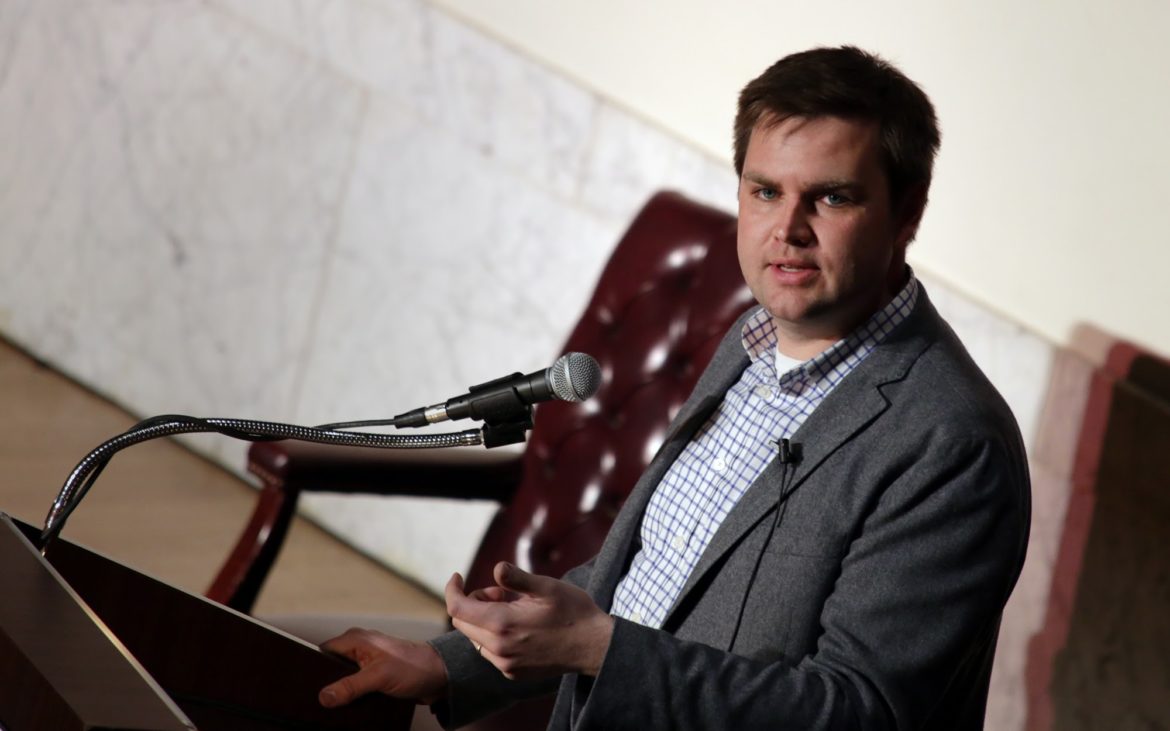 The American Dream might be a fantasy if you live in “hillbilly” America.

While the poor in places like Utah or the Bay Area may have a reasonable hope of improving their lot, author J.D. Vance thinks their peers in Appalachia, the Rust Belt, and the rural South face far higher barriers to prosperity.

Too many things have to go right for too many people to expect a path out of concentrated poverty, though Vance, author of the bestselling memoir “Hillbilly Elegy,” intends to break that cycle by shining a spotlight on poverty in rural America, boosting investment and healing the wounds of the opioid crisis.

“It turns out the kids who are born on the bottom very often stay there,” Vance, 32, told about 550 people at a Thursday event hosted by PublicSource* at the Carnegie Library Lecture Hall in Oakland.

Vance’s book is an attempt to explain the complexity of the problems facing rural Americans by giving readers an unflinching look at his own family’s dysfunction as he grew up in the “hillbilly” culture of Kentucky and Southwestern Ohio.

While many have studied the issue, he said he’s dissatisfied with stiff political explanations.

But Vance said neither view fully captures the nuances he saw growing up in Middletown, Ohio, and the fact that struggling populations may face institutional hurdles but also make their own choices.

“Respect them as somebody who still has some power,” Vance said, “while recognizing that there are all of these incredible barriers lined up against them.” His family history is one of ups and downs. In the 1940s, his grandparents, whom he calls Mamaw and Papaw, married as teenagers and found economic stability during a long-gone time when limited education and blue collar work still could mean a steady paycheck.

But the family didn’t fit in, a problem he thinks stems from an inability to cope with emotional baggage. Vance illustrated that for the audience by reading a passage from his book where Mamaw and Papaw spew profanity and essentially ransack a pharmacy after an employee scolds his Uncle Jimmy for picking up an expensive toy.

In hillbilly culture, attacks from outsiders warrant retaliation. Internal conflicts might be just as fierce, but public sharing is essentially forbidden.

“Hillbilly Elegy,” which has been both lauded and sharply criticized, is not a cultural study so much as a truth-telling document that explains issues facing Appalachia by cataloguing his own struggle growing up. Throughout the book, he shares an unflattering view of his mother’s battle with drug addiction and a home life that was anything but stable.

Despite the dark themes, Vance thinks the book helped his mother judge herself less harshly because it shows deeper roots in the region of problems like concentrated poverty and substance abuse.

“Seeing that they have a root and a cause hopefully made her feel a little more compassionately for herself,” Vance said.

After joining the Marine Corps, attending Ohio State University and eventually Yale Law School, Vance said he had “incredible arrogance” at his success in spite of his upbringing.

Now, after writing out the full story, he sees his life with more humility and said he involved his family in the writing process instead of dumping their baggage on the world without notice.

Recently, Vance announced that he is moving from San Francisco back to Ohio to start a nonprofit focused on solutions to the opioid crisis, which is ravaging rural white communities nationwide, including in Pennsylvania.

The problems facing rural America are complicated, but Vance said the opioid problem needs to be solved before other progress can be made.

“You have a lot of people who would be able to take care of their children,” said Vance, who supports better access to medication-assisted drug treatment. J.D. Vance, author of the book “Hillbilly Elegy,” speaks during the question-and-answer portion of a talk at the Carnegie Library Lecture Hall. (Photo by Ryan Loew/PublicSource)

While Vance is looking for solutions, he seems confused at being called the “Trump whisperer.” Yes, he is a conservative — notably, he takes offense at people who sneer at Lee Greenwood’s “God Bless the USA” — and he wrote a book that looks at deep problems facing areas now considered Trump country. In fact, The New York Times named “Hillbilly Elegy” as one of six books to explain Trump’s win.

But he started writing “Hillbilly Elegy” years ago, when he was in his mid-20s, and much of his message is a plea for Americans to shake off their assumptions and understand the impacts of economic and social segregation between hubs for investment and the rest of the country.

He views that divide as geographic, with intense political splits based on where people live, and caricatures based on assumptions groups of Americans make about people they don’t know.

“When you spend a little bit of time around somebody who you think is a complete idiot or morally defective,” Vance said, “and you find out they’re actually a lot more complicated and a lot more interesting than you give them credit for, that’s how we start to break this up.”

He’s optimistic. But he’s cynical about that happening in the short term.

“Until it really hits us in the face sometimes,” Vance said, “we don’t try to deal with these issues.”

*Thursday’s PublicSource event was funded with grant money from The Hillman Foundation. The foundation also supports general operations at PublicSource.

One thought on “J.D. Vance talks with a Pittsburgh audience about the ‘hillbilly’ struggle and a divided nation”