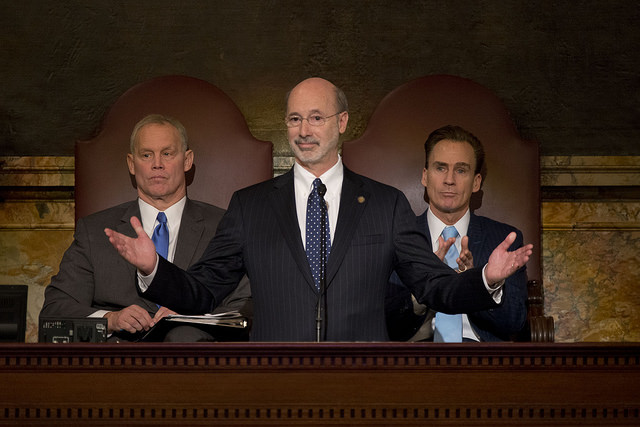 Every income bracket would pay more, as a group, in 2018-‘19 after Pennsylvania phases in all of Gov. Tom Wolf’s proposed tax changes, according to an analysis by the state’s non-partisan Independent Fiscal Office.

The finding was disputed by John Hanger, the governor’s Secretary of Planning and Policy, in a conference call with reporters Friday. Hanger said there were serious limitations to some of the data used by the office and that Wolf remained confident his plan would benefit most Pennsylvanians.

In a sense, both could be right.

In PublicSource’s tax calculator story, we said that most people would pay slightly less in taxes under Wolf’s plan — at least until you add up the newly-taxed goods and services from 46 previously-exempt categories.

That’s because our calculator showed the decrease in property taxes more than offset, for most homeowners, the increases in the state sales tax and income tax. But the people who paid for those newly-taxed goods and services would likely pay more, perhaps a lot more, for their total tax bill.

Let’s look at Wolf’s budget in a smaller universe, as an example. Let’s say this new mini-Pennsylvania has five residents. Four people in the state may pay $20 less in taxes under Wolf’s plan and one person may pay $100 more. As a group, they pay more in taxes, but it’s also true that most of them are better off.

The office projects that people who make more than $100,000 will eventually pay two-thirds of the tax increases proposed by Wolf.

Another factor is that the PublicSource tax calculator only considered changes to the property tax, sales tax and income tax.

We did not analyze the other proposed changes in the tax code, such as the five percent natural gas severance tax, the decrease in the net corporate income tax rate and the increased taxes on tobacco products.

Wolf proposed a $1 increased tax, per pack, on cigarettes and new sales taxes on cigars and chewing tobacco. Combined, they are projected to cost Pennsylvania taxpayers $552 million in 2018-‘19.

Both the severance tax, if passed on to consumers, and the increased taxes on tobacco products are regressive taxes, which means they disproportionately affect people with lower incomes.

For example, the office estimates that people who make under $50,000 will pay half of the total taxes on tobacco.

In fact, people who make less than $25,000 would’ve saved money, as a group, under Wolf’s plan if it weren’t for the increased taxes on tobacco.

Because of Allegheny County’s one percent local sales tax, on top of the state’s current six percent sales tax, the Independent Fiscal Office projects that the county will make an extra $57 million in 2016-‘17.