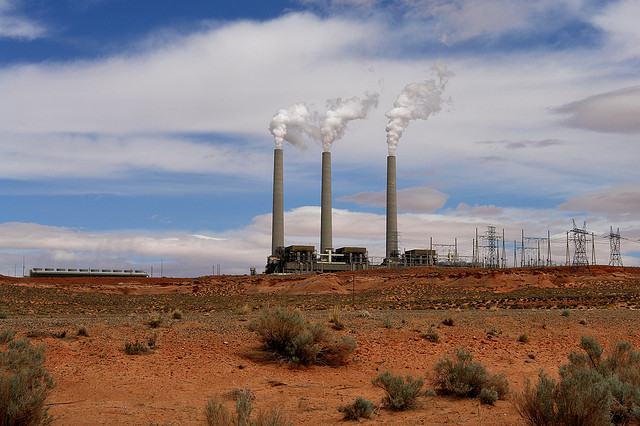 The massive Navajo Generating Station generates power needed to move water into growing areas of Arizona, such as Phoenix and Tuscon. But, the plant is also responsible for more than a quarter of the state’s emissions from the energy generation industry, according to ProPublica.

The plant is now at the center of two conflicting issues: attempting to reduce the state’s carbon emissions while still moving water across Arizona’s arid landscape during an intensifying drought.

The power generated enables a modern wonder. It drives a set of pumps 325 miles down the Colorado River that heave trillions of gallons of water out of the river and send it shooting over mountains and through canals. That water — lifted 3,000 vertical feet and carried 336 miles — has enabled the cities of Phoenix and Tucson to rapidly expand.

But, with an increasing drought, it’s unclear how the Navajo Generating Station and other projects in the West will function with less water.

Electric generating dams, such as Hoover Dam or the Glen Canyon Dam, aren’t holding as much water in reserve as they used to.

Lake Powell, which sits behind the 700-foot-tall Glen Canyon Dam and is the nation’s second-largest water reserve, is even more troubled. The lake has recently fluctuated between 39 and 51 percent full, and if the drought ended tomorrow, it could take nearly a decade for it to fill back up. But the larger problem is not that Lake Powell could one day approach what experts call “dead pool,” meaning there is no longer enough water for it to flow through the dam’s gates or generate the hydropower that the West’s electricity grid depends on.

The Navajo Generating Station depends on nearby coal mines to generate the power for the pumps in the Central Arizona Project, the state’s largest canal, at an enormous cost.

The plant consumes 15 tons of coal per minute and emits more than 16 million tons of carbon dioxide each year.

For now, it has been granted a reprieve from complying with the Obama administration’s new Clean Power initiative, which requires Arizona to reduce its carbon output by 52 percent.

All of that carbon dioxide may be contributing to hotter temperatures and the drought. But, as a compromise with the Environmental Protection Agency, the plant will continue operating until 2044.