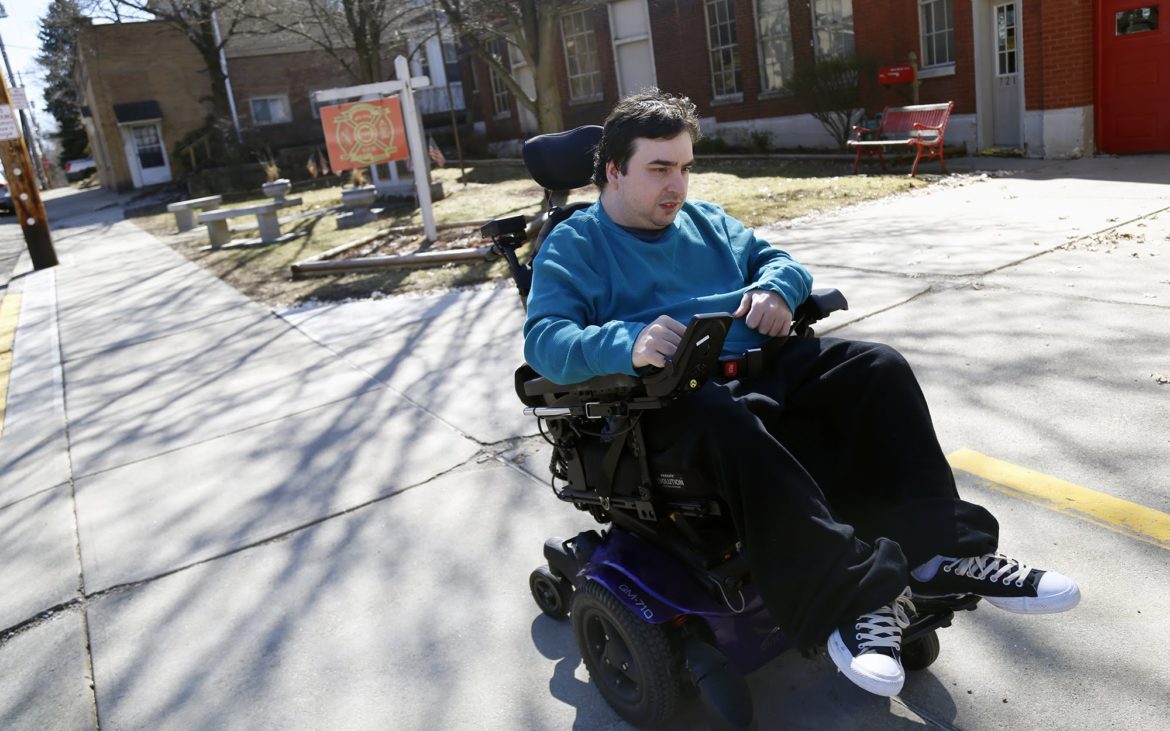 Michael Haider, 34, describes the lack of wheelchair-accessible Uber and Lyft vehicles in the Pittsburgh market as "active discrimination." (Photo by Ryan Loew/PublicSource)

While visiting Chicago last year, wheelchair user Jill Constantin ordered an Uber for a ride from a comedy show. She and a friend wanted something faster than a 25-minute bus ride.

In 10 minutes, an Uber driver arrived in a WAV (a wheelchair-accessible vehicle), secured Constantin’s wheelchair in place and took the pair to their next destination.

“It was a good experience,” said Constantin, 35, who lives in a suburb of Pittsburgh. “Something you can’t do here in Pittsburgh.”

In the Pittsburgh region, neither Uber nor Lyft, its competitor in the ride-share industry, accommodate passengers who use non-folding or motorized wheelchairs. Although Uber said its drivers are expected to accommodate riders with folding wheelchairs, walkers or canes, the company does not offer WAVs for passengers who remain in their wheelchairs for the ride.

So while Pittsburgh is a proving ground for autonomous cars — the next leap ahead in the ride-sharing industry — wheelchair-using customers who try to call a driver with their smartphone apps are left waiting on the curb.

On March 4, Pittsburgh Mayor Bill Peduto announced what the city calls transformative policies for the testing of autonomous vehicles. The policies focus on transparency, reducing environmental impacts and promoting lower cost and equitable transportation options. They do not specifically address wheelchair accessibility, though Uber did discuss the issue with Pittsburgh officials last year. So far, its operations haven't changed.

Meanwhile, Uber deploys its UberWAV program in Chicago, New York City, Philadelphia and Washington D.C. The program provides WAVs and drivers who are trained to assist passengers. In addition, the company partners with MV Transportation, a national provider of WAVs and drivers, in Boston and Toronto. Uber is expanding the partnership in San Francisco and Los Angeles.

Those eight cities account for half of all Uber rides in the United States and Canada, Uber spokesperson Harry Hartfield wrote in an email. In four of those cities — Chicago, New York City, San Francisco and Washington D.C. — disability rights advocates have filed lawsuits against Uber, citing local and state anti-discrimination laws and the federal Americans with Disabilities Act [ADA]. A similar lawsuit against Lyft was filed in San Francisco.

The U.S. Department of Justice stated in 2015 that private companies that are primarily engaged in transportation are required to comply with the ADA. 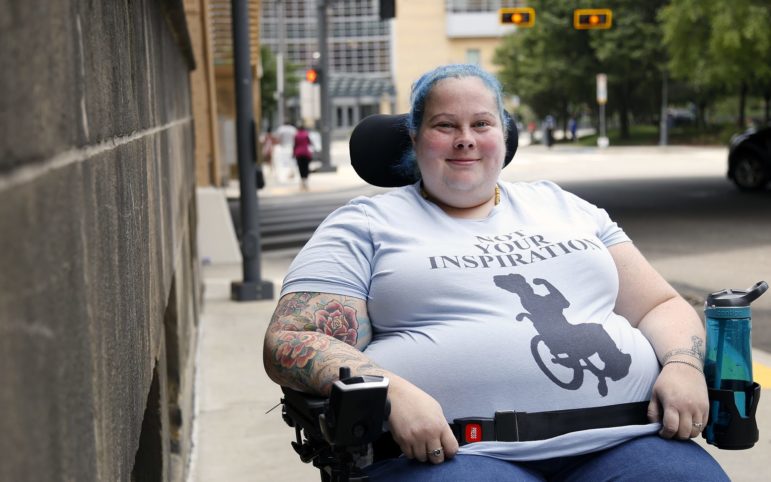 These lawsuits focus on wheelchair-accessible service, including availability, wait times and fares. Two other lawsuits have addressed the accommodation of blind passengers and service dogs. At least three lawsuits have led to settlements and at least two are ongoing.

The collective impact of the lawsuits is mixed, bringing attention and progress to some cities. But not in Pittsburgh.

Hartfield wrote in an email that the company faces barriers to making WAV service standard everywhere, including in Pittsburgh. Because Uber's drivers use their own cars, he wrote, “there simply aren’t enough people who personally own WAVS who also choose to drive with Uber.” Hartfield said Uber is supplementing driver-owned WAVs in a number of cities through a partnership with MV Transportation.

Lyft provided an emailed statement saying the company is committed to improving accessibility for riders. However, the company does not have WAVs in the Pittsburgh market and instead refers wheelchair-using passengers to local services that may be able to transport them.

ACCESS paratransit is one local service, and while it fills an important need, disability rights advocates like Access Mob Pittsburgh founder Alisa Grishman see it as an older model that doesn’t meet the needs of people with active lives.

Paratransit requires scheduling a day in advance. An Uber or a Lyft can be called in minutes from a smartphone.

“People say, ‘Use paratransit,’” said Grishman, 37. “But if I want to go somewhere impromptu – go to a grocery store, visit a friend — I can’t.”

At Uber, Hartfield explained that expanding wheelchair accessibility is a priority, and one in which the company is investing tens of millions of dollars in some cities to make it “more timely and reliable.”

“We know that there is still a long way to go — and that we’re at the beginning, not the end, of the journey,” Hartfield wrote.

Here in Pittsburgh, disability rights advocates say that accessibility is something Uber and Lyft should have been thinking about from the start.

“I feel like these companies don’t care that we exist,” said North Hills resident Michael Haider, 34, a wheelchair user. “They tailor their product to a certain type of able-bodied person.”

Haider described the lack of accessibility as “active discrimination.”

“These services exist, but I can’t use them. It’s like they have a sign on them that says, ‘No wheelchairs allowed.’”

Elsewhere, some disability rights advocates have expressed skepticism of efforts by Lyft and Uber. In San Francisco, Disability Rights Advocates filed lawsuits against both companies in early 2018. The lawsuit against Uber is active; the lawsuit against Lyft is “not currently ongoing,” said Melissa Riess, a staff attorney at the organization.

“Our experience is that [Uber and Lyft] are pretty resistant to our efforts,” Riess said. “They fiercely litigate these cases.”

Riess said Uber’s partnership with MV Transportation to increase WAVs is a “positive step,” but she has received feedback from people who use the service and say it’s not equivalent to what is offered to the general public.

“There’s much to be done before Uber’s wheelchair access service complies with the requirements of the ADA,” she said.

Disability rights advocate Jeff Parker of Oakland puts the issue of accessible Ubers and Lyfts within the larger framework of social change.

Parker, a wheelchair user and longtime member of the local Committee for Accessible Transportation, has witnessed the evolution of accessible transportation since his student days at the University of Pittsburgh in the 1970s when he couldn’t get out of Oakland because public buses did not have ramps.

The passage of the ADA in 1990 brought a series of developments — accessible buses, paratransit and some taxis — but he said the momentum has not kept up and advocates face “a constant struggle to stop [accessibility] from deteriorating.”

Getting Uber and Lyft to offer WAVs in Pittsburgh is the next step in that struggle, Parker said, adding that the mayor and county executive should team up to influence the companies.

“You’re not bound to having to make a reservation to get around.”

In Philadelphia, tension between ride-sharing and taxi companies has been a benefit for accessibility.

The launch of Uber and Lyft in cities across the nation over the last decade was unwelcome by taxi operators, including those in Pittsburgh. In Philadelphia, where opposition by the taxi industry was more intense, the legal status of Uber and Lyft to operate expired in early October 2016. Later that year, the Pennsylvania Legislature passed a law allowing Lyft and Uber to operate across Pennsylvania.

The law included a big bonus for riders in Philadelphia by requiring Uber and Lyft to put a total of 70 WAVs in place there the following year.

Charles Horton, who served as executive director of the Philadelphia Mayor’s Office for People with Disabilities before leaving his city post March 8, said he has been pleased with the evolution of accessible ride-sharing in the city. He commended Uber in particular for collaborating with his office and the community when UberWAV first came to Philadelphia in 2014.

Now, people with disabilities “have the option to travel the way you want to,” he said. “You’re not bound to having to make a reservation to get around.” Even so, “there were growing pains,” Horton said, noting that accessible Ubers, Lyfts and taxis all hit the road at about the same time.

One of those issues was making sure drivers were knowledgeable about transporting people with disabilities. News coverage noted complaints about vehicles, such as ramps that were broken or too steep.

Horton, who uses a wheelchair, uses ride-sharing services when he is not driving his own vehicle.

Horton encourages advocates in Pittsburgh to communicate the need for wheelchair accessibility to Uber and Lyft.

“Transportation is one of the essential parts of independence,” Horton said. “It opens up so many avenues of life.”

While state law did not require WAVs to be added in Pittsburgh, local taxi services are outpacing Lyft and Uber. In 2013, Yellow Cab (now ZTrip) launched a fleet of 15 wheelchair-accessible taxis. In 2012, the VETaxi division of Star Transportation Group started offering them. VETaxi currently has a fleet of 23 WAVs, according to Bobby DeLucia, vice president of Star Transportation Group

Could Pittsburgh be a candidate for UberWAV in the future?

Hartfield said the company “want[s] to partner with cities on this important work. Our goal is to expand to more cities in 2019 as we improve our existing cities so we can apply what we learn elsewhere.”

Karina Ricks, Pittsburgh’s director of mobility and infrastructure, said the city has already had conversations with Uber about accessibility.

When the city’s relationship with Uber’s operation of autonomous vehicles hit a bad patch last year, Ricks recalled that the company “brought forward the notion that they would like to give incentives to their drivers to have more accessible vehicles.”

Characterizing the idea as a “peace offering,” Ricks said she was not sure if Uber took any action on it. Hartfield did not respond to a request for comment on the discussions. 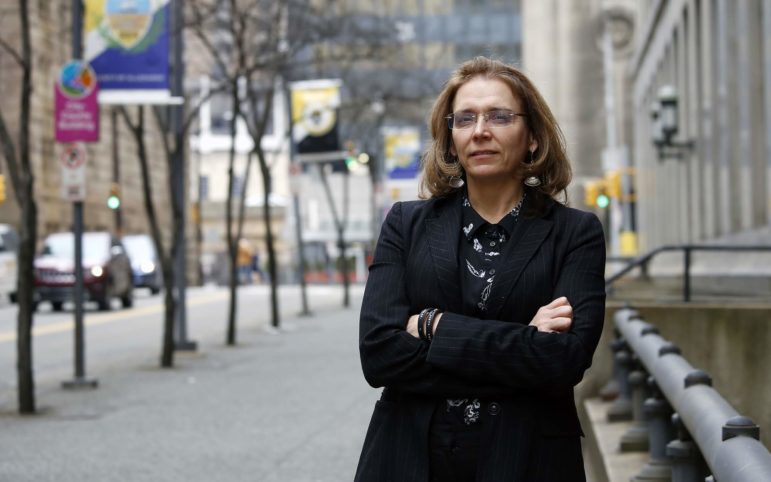 Karina Ricks is Pittsburgh's director of mobility and infrastructure. (Photo by Ryan Loew/PublicSource)

“It is our value as a city to have accessibility for all,” Ricks said. "Any company that comes here should do that.” However, the Pennsylvania Public Utility Commission, not the city, oversees commercial car services.

Ricks added that more transportation options are needed in Pittsburgh in general, noting that getting around the city can be difficult for people who don’t or can’t drive or don’t have a vehicle.

“We already have a small number of offerings for everyone,” she said, “and it is smaller still for people who use wheelchairs.”

While Lyft and Uber have yet to bring wheelchair-accessible rides to Pittsburgh, two companies are addressing accessibility and the larger issue of transportation insecurity.

Ruby Ride, based in East Liberty, recently launched two pilot programs focused on geographic areas – one in the McKees Rocks area and one in Clairton. Ruby Ride partners with community organizations and places a WAV where needed. CEO Jeff Ericson moved from Arizona to Pittsburgh three years ago. The company operates a program in Tucson.

Company CEO John Doan, a 1996 Carnegie Mellon University engineering graduate, has a brother with disabilities who has informed his understanding of transportation needs.

The company’s plans to expand to Pittsburgh reflect its interest in Uber’s testing of self-driving cars here.

Mobility4All wants to develop a “deliberate, defined process” for self-driving WAVs, Doan said. In his view, Uber will address accessibility in autonomous vehicles as “an afterthought.”

According to Hartfield, Uber is “still in the early days” of developing autonomous vehicles and sees wheelchair accessibility for those cars as an issue to address in the future. “Our first focus is on building a safe, reliable system that will, in turn, enable safe and reliable WAV services,” he wrote.

At the city, Ricks said that disability rights advocates should be "very sticky in continuing to advocate” for universal accessibility.

“If the advocates are pushing for this,” Ricks said, “maybe we can get it right this time.”

Updated 3/20/19: As of March 8, Charles Horton no longer works for the City of Philadelphia.

Freelance journalist Tina Calabro writes about disability issues. She can be reached at tina.calabro@verizon.net.

This story was fact-checked by Kieran McLean.