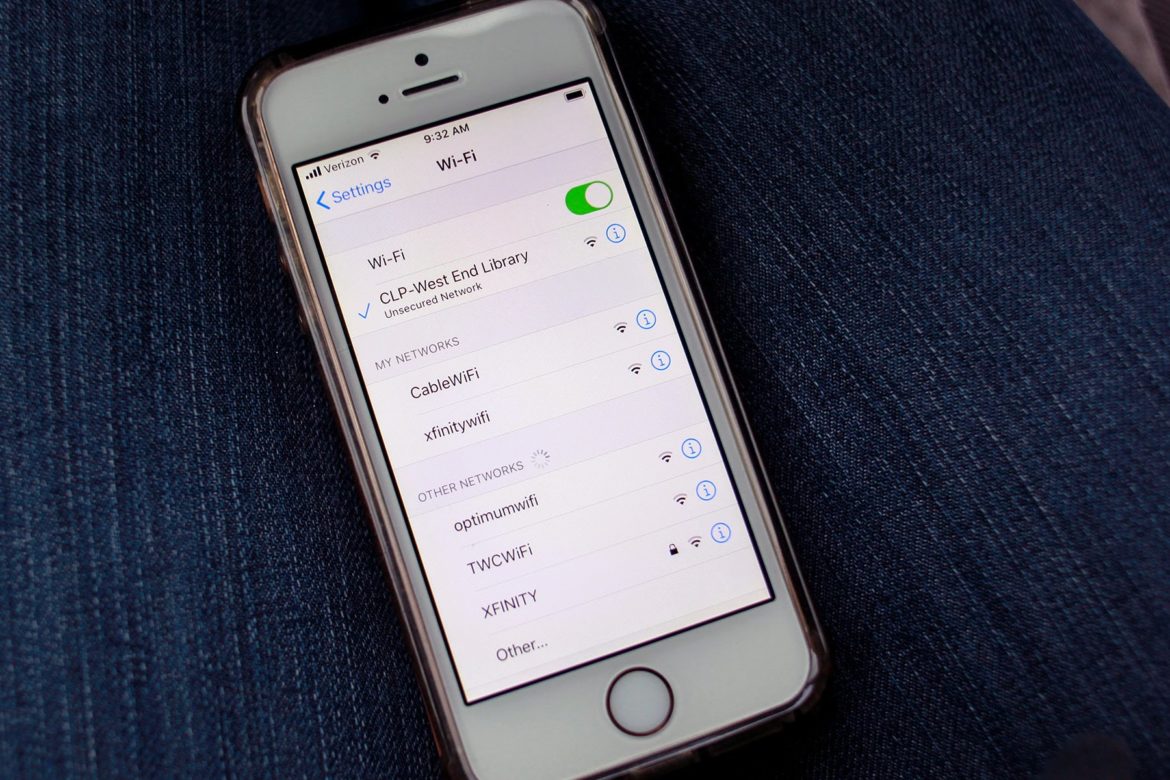 The free Wi-Fi signal for Carnegie Library of Pittsburgh's West End branch is accessible from the parking lot. (Photo by Kimberly Rowen/PublicSource)

People are sitting in their cars outside of Carnegie libraries just to use the internet.

A survey conducted by Pittsburgh Public Schools found that more than 1,500 of their 23,000 students have no internet. Even more households don't have enough computers or devices for each child to do schoolwork at home.

And a local nonprofit that builds public Wi-Fi has come out of quarantine to help address the digital divide that is being magnified by the coronavirus pandemic.

“Depending on the neighborhood, you're looking at up to 70% of homes not having broadband internet access,” wrote Adam Longwill, executive director of Allentown nonprofit Meta Mesh, in an email to PublicSource. “So depending on where you are, it's either 2020 or 1995.”

The problem has raised concerns about equity and public health.

People with means have largely begun working and learning virtually. Many have also switched to doing everyday tasks online, like grocery shopping, banking and seeing the doctor. But those without internet access, a computer or digital literacy skills aren’t able to shift important tasks online.

According to U.S. Census Bureau American Community Survey data from 2014 to 2018, almost one in five Allegheny County households do not have an internet subscription.

In Pittsburgh neighborhoods such as Homewood, the Hill District and Hazelwood, local research from 2018 shows that a significant proportion of households surveyed lacked broadband access. In Homewood, the number was more than 70%.

“The digital divide already existed,” said Angela Siefer, executive director of the National Digital Inclusion Alliance. “The difference now is that the things that those families would do to still survive in our digital world, they shouldn’t be doing, because the public safety guidance is to stay home.”

From computers to Wi-Fi, we took a look at how local organizations are working to close the digital divide in Allegheny County during the pandemic.

Are you or someone you know struggling with a lack of internet or computer access? Help us report on this issue. Email juliette@publicsource.org to share your story.

In late March, PPS created a home technology survey to determine the proportion of students who have devices and internet access at home.

Of the respondents — which account for roughly 77% of PPS students — 41% of families indicated they do not have enough devices for each of their children.

About 1,533 students — about 7% of PPS students — do not have internet access, according to the survey, though PPS expects that the actual percentage is higher when accounting for the 3,649 students whose families did not respond to the survey.

“I think it has shed light on what we already knew and put us into urgency mode in terms of, ‘Hey, our kids need access,’” PPS Superintendent Anthony Hamlet said. The district’s goal is to ensure all students have access to technology for at-home instruction, even after the pandemic is over.

“Just the sheer magnitude from going to a brick and mortar to an online environment is difficult in itself. Now just think about doing it in 30 days,” Hamlet said. “It’s a monumental task, but not an insurmountable task.” 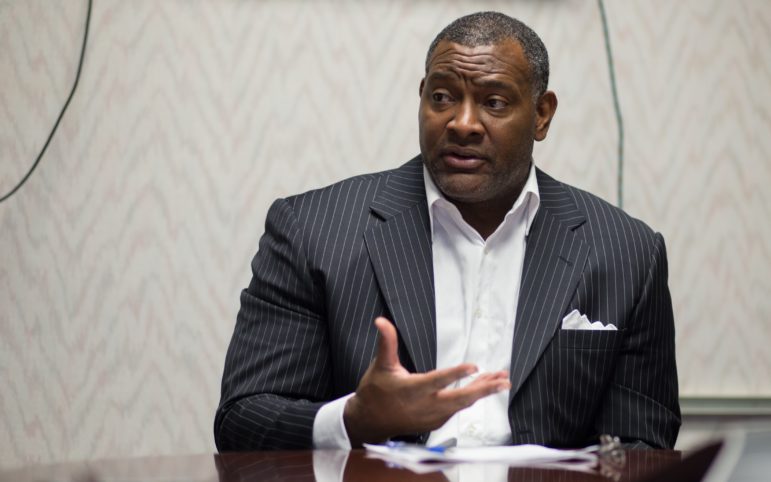 PPS plans to resume classes on April 16, with both online and take-home packet options for students.

The district is working to acquire more computers to distribute to its students. The district has 2,500 laptops, is purchasing 5,000 more from the Warrendale-based company All Lines Technology and is acquiring 599 from the University of Pittsburgh through Neighborhood Allies. The total cost is about $1.5 million, PPS spokesperson Ebony Pugh wrote in an email to PublicSource.

Yet the new acquisitions still won’t be enough. The district still needs thousands of laptops, Pugh said. The district also has some hotspot devices, and they are being prioritized for high school seniors. Several local nonprofits, foundations and corporations are working to get PPS more devices.

Hamlet said one main reason the district hasn’t yet been able to obtain enough devices for every student is the supply chain. “Right now, almost, probably, every district is trying to get computers,” he said. “There’s only so many out there right now, so we have to wait.”

Lisa Goscinski, a 37-year-old mother of three who lives in the Windgap neighborhood of Pittsburgh, is concerned about PPS resuming classes online while her family lacks resources. She has internet service and an iPad at home, but with three school-aged kids, she doesn’t think one device will be enough. “For a kindergartener and a 7th-grader to share an iPad to do schoolwork, I don’t see it working, and I just don’t have the money to go buy one right now,” she said. “Everything I have has been spent on food.”

She completed the district’s survey and asked for help finding computers on a local Facebook page, but so far has not had success. “If not, I’m going to have to wait until we hopefully get this stimulus check and find a cheap one somewhere for them to use,” she said.

Public libraries have long served as access points for those without internet access or devices at home. In 2019, Carnegie Library of Pittsburgh [CLP] had almost 900,000 logins on its internet network. Just more than half of those were on the library’s public computers, as opposed to patrons using their own devices. “The digital divide informs all of our work,” said Toby Greenwalt, CLP’s director of digital strategy and technology integration.

During the COVID-19 outbreak, CLP has remained an internet access point, though to a smaller degree. Since closing on March 14, CLP has kept its Wi-Fi on. According to library staff, many people sit in the library parking lots, within range of the network, and log in from their cars. In the first two weeks after CLP closed its doors, its Wi-Fi network had 1,011 logins across 17 CLP branches, for a total of almost 84,000 minutes online. The libraries that have seen the most logins are the main branch in Oakland, the Allegheny branch in the North Side, Homewood, Squirrel Hill and Carrick. In a normal week when the library is open, the network averages around 6,800 logins across the system. 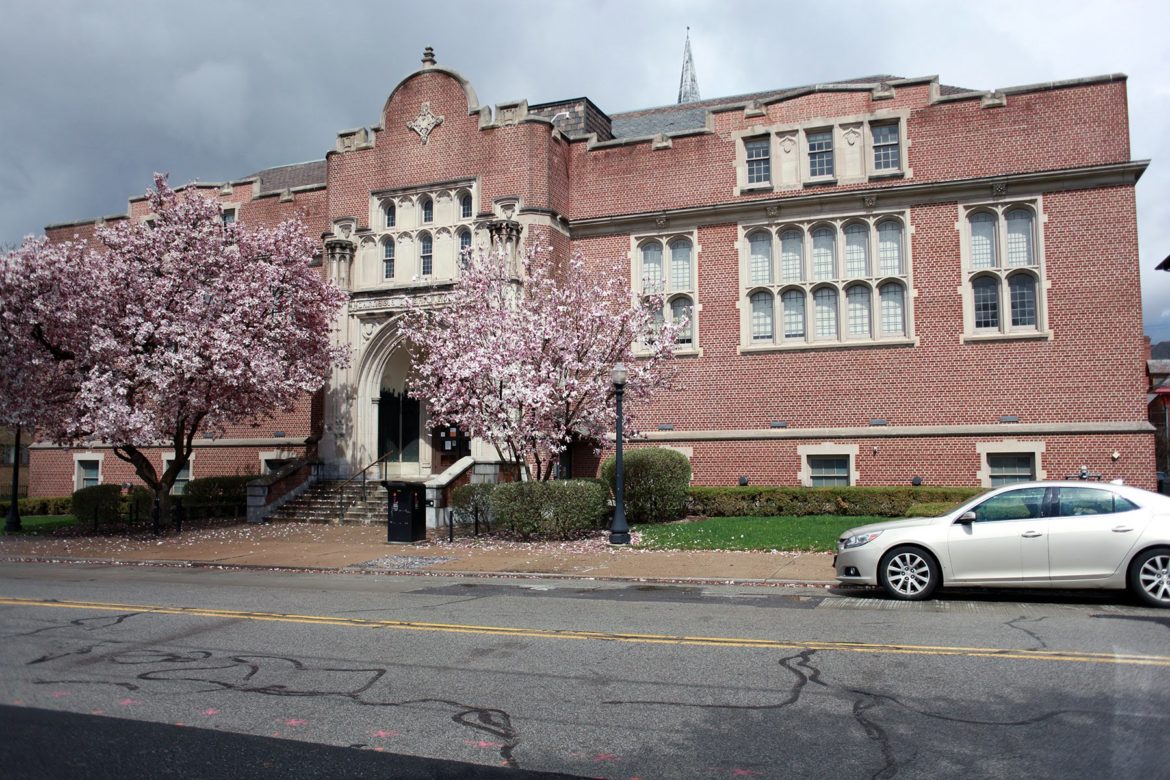 A car sits parked in front of the Homewood branch of the Carnegie Library of Pittsburgh on April 1. (Photo by Kimberly Rowen/PublicSource)

“We’re happy to still be able to provide that service to the folks that have the technology and have the ability to get to the libraries,” said Maria Joseph, library services manager for CLP-West End.

The library also has 100 stand-alone hotspots and 180 hotspot and Chromebook bundles that it typically lends out to patrons. Greenwalt said most, if not all, of the devices were on loan when the libraries closed. Those who borrowed them prior to the shutdown still have them and are able to use them. “That’s only going to be a small dent in our ability to serve the digital divide,” he said.

Computer Reach, a Point Breeze-based nonprofit, has refurbished computers and offered digital literacy programming to schools, seniors and social services like homeless shelters since 2001. But now it’s busier than ever.

In March, Computer Reach released a call-out for people who needed computers. Within two hours, it had 538 responses. “Literally within minutes, [responses] just started flowing in,” said Computer Reach Executive Director Dave Sevick. “I had to turn [the call-out] off, because we only have 200 computers.”

Throughout the city, other nonprofits and community groups also started to realize the immediate need for computers. On March 19, Circles Greater Pittsburgh, an organization that helps residents get out of poverty, created a survey to assess the needs of the community members they serve. One recurring answer: computers.

“I was blown away by the numbers of people that needed them,” Executive Director Tammy Thompson said. The organization was initially able to get about 35 computers from corporate partners, but Thompson knew it wasn’t enough. “We need it to be more, and we need it to be a little bit faster,” she said.

“The demand is definitely out there. And we’ve known that for years.”

Thompson’s call-out for computers on Facebook caught the attention of Vanessa Buffry, senior program manager of digital inclusion at Neighborhood Allies. She reached out to Thompson, Computer Reach and other community organizations, converging a team to find a solution. “I thought, ‘OK, we can figure this out,’” she said.

Since then, Neighborhood Allies, Circles Greater Pittsburgh and Computer Reach, along with the support of self-driving car company Aurora, the Pittsburgh Technology Council and others, have created the Beyond the Laptops challenge to raise $300,000 to refurbish 3,000 laptops. Of those, 2,500 are slated to go to PPS, with the other 500 going to community members in need. So far, they’ve raised more than $200,000.

Yet Thompson worries that there will still be a need, even when the goal is reached.  The Beyond the Laptops team estimates that 75,000 households in Allegheny County lack computers. “When there [are so many families] in need of technology, just think about how many times over an investment like that is going to have to happen to reach all of the families that need it,” Thompson said. “And how long is it going to take?”

Buffry said the Beyond the Laptops organizers will be creating an online form for hardware donations to help meet the need. The campaign is currently seeking companies that can donate 10 or more computers.

But having a computer only solves part of the problem. Residents also need access to the web.

In mid-February, business for Meta Mesh was slow, as is typical in the winter. As the severity of coronavirus became more pronounced, Longwill decided to pause Meta Mesh’s operations. “I saw the writing on the wall,” he said. Longwill began staying home and looking for freelance work.

Yet to Longwill’s surprise, when the pandemic hit full force, his phone started ringing. He was receiving calls from organizations and institutions that wanted to know how they could start working to bridge the digital divide — and quickly.

In the last few weeks, Meta Mesh has begun working on numerous new projects, including a partnership with Carnegie Mellon University’s School of Computer Science to provide connectivity to small school districts in Allegheny County. “Just when I thought no one was going to need us again, it turns out that people need us now more than any time in our history,” he said.

Buffry from Neighborhood Allies said household Wi-Fi is “the next frontier” after families have computers. She hopes to partner with Meta Mesh to increase internet connectivity.

While the pandemic has revealed the stark inequity, those trying to bridge the digital divide note that it’s been a long-standing problem. “The demand is definitely out there. And we’ve known that for years,” Sevick said. “It’s just forced into a very obvious situation right now.”