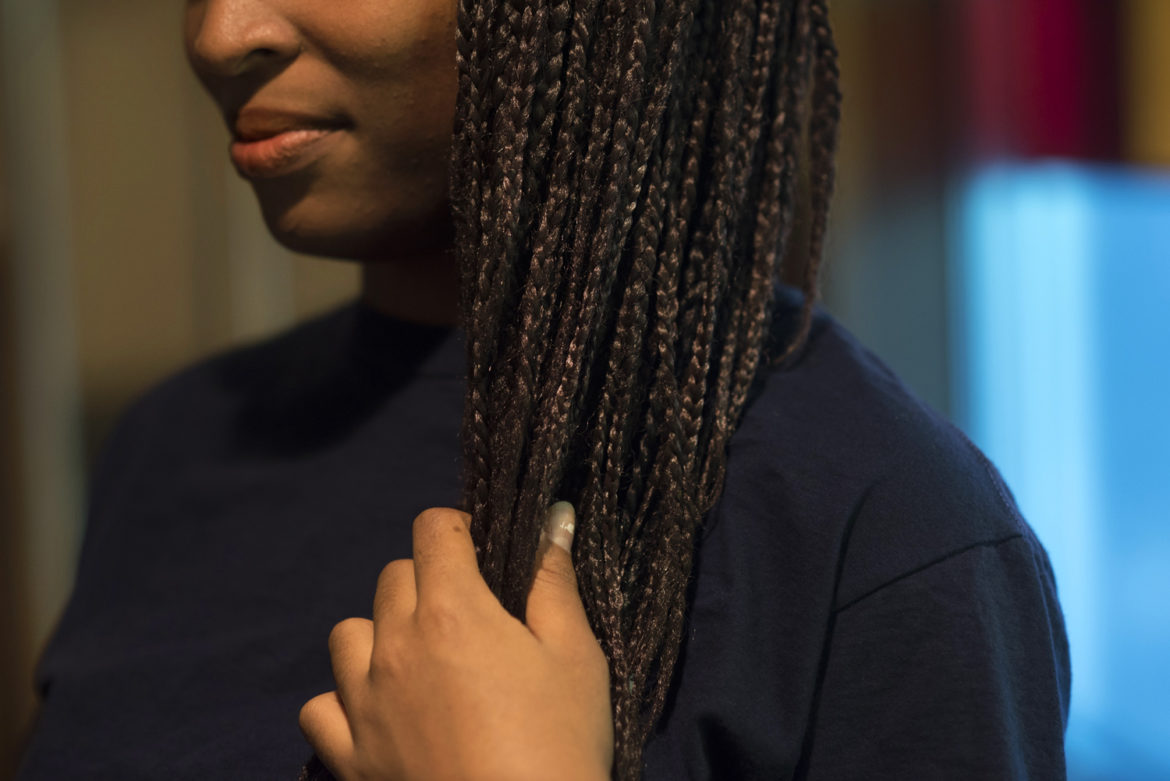 She left her old sketchbook at a previous group home in Butler County, but she’s kept drawing and recently finished a portrait of Mr. Krabs on his boat, counting his money.

She’s working on a novel — so far nine pages in — that’s far more intense. A woman emerges from a coma after two years, and she’s trying to sort out what’s gone wrong.

Nicole is trying to figure out her life, too. She has hope, and dreams, like going to the University of Pittsburgh to study criminal justice. But there’s also the side of her weighed down by the turmoil she’s experienced: A home life marked with screaming fights, changing addresses from shelter to group home to foster care, and strings of funerals due to gun violence, all piled on the normal stress of just trying to grow up.

“I was lost. I was really lost,” Nicole* said. “I didn’t feel like anybody was on my side.”

She’s five months into her second stay at a group home run by Gwen’s Girls, which provides social services to at-risk girls on Pittsburgh’s North Side, and she said that’s brought stability.

Meanwhile, the 16-year-old is trying to repair her relationship with her mother and prepare for the birth of her son in only a few weeks.

Nicole’s story is a familiar one. Her life is her own. Yet the challenges she’s facing align with troubling data in a new report funded by the FISA Foundation and The Heinz Endowments** on the unequal struggle facing black girls in the Pittsburgh area.

of black girls younger than 5 in Pittsburgh live in poverty.

In Allegheny County, black teenage girls are disproportionately channeled to the child welfare system, they’re more likely to be removed from their homes, and they face other disparities like greatly increased referrals to juvenile court, compared to white girls.

They’re far more likely to grow up in poverty, and to feel or see violence and be punished at school.

Kristy Trautmann, FISA’s executive director, sees much of the report as evidence of structural oppression.

“I think a lot of people may think about racism as, I don’t know, subtle, sometimes,” Trautmann said. “To me, this is stark.”

To push for solutions, Gwen’s Girls is hosting its first Equity Summit today. There, the local disparities will be highlighted, and collaborators such as A+ Schools, the Education Law Center and the Women and Girls Foundation will discuss ways to heal the inequalities.

The summit will close by bringing everyone together to talk about an action plan, which Gwen’s Girls aims to continue developing in coming months.

Nicole describes a happy childhood in the Hill District.

The neighborhood seemed like family. Everybody knew each other, and she described her mom as being like her best friend.

Nicole’s mom was also a teen mother, balancing the same struggles of growing up, but with two kids at age 16.

“It was really hard for her,” Nicole said, explaining the advice her mom’s giving her. “She told me take it one day at a time.”

As Nicole became a teenager, the close friendship broke into screaming conflict, which she described as both physical and verbal. She was removed from the home, first to a shelter, then to a group home, back with her mom, then to Gwen’s Girls, another group home, foster care and back to Gwen’s Girls.

“I didn’t really know anything about different neighborhoods until I started getting into group homes,” Nicole said.

“A lot of these systems and even community-based services function in silos."

That experience is far less common for white girls.

According to the new report, black girls in their teenage years are far more likely to be placed in the county’s child welfare system. Often, the reason is “parent-child conflict,” and often the placement is a group home.

Group homes can provide stability. But the report also links them with worse outcomes for girls, including involvement in the juvenile justice system. Allegheny County has recently been pushing youth toward foster care as an alternative.

Kathi Elliott, executive director of Gwen’s Girls, said the disparities in the report, which cover child welfare, education, health and juvenile justice, are disheartening, though not surprising.

“A lot of these systems and even community-based services function in silos,” Elliott said.

Fixing things requires taking a broader view and seeing how the inequalities intersect. That’s a major point of the new report and efforts like the Gwen’s Girls summit.

It’s not just that inequality exists.

It’s that the inequalities are in many ways worse in Pittsburgh.

In Pittsburgh, it’s 55 percent. That disparity is magnified to 68 percent for black girls younger than 5.

Report author Sara Goodkind said poverty is tied to many other problems, such as abuse and exploitation.

As an associate professor at the University of Pittsburgh, Goodkind is well-acquainted with these issues. Yet some findings were still shocking.

that of white girls.

As a group, they’re also less likely than white girls to be diverted from the juvenile system.

About a third of the county’s juvenile referrals are for assault, though Goodkind contends that many of these cases involve girls trying to protect themselves.

While teens in the county reported using alcohol and drugs at similar rates, black girls are three times as likely to be referred for drug offenses.

And black girls are 14 times as likely to be referred for not paying fines.

None of these issues are new.

“Isn’t that the story of our country really?” Trautmann said. “It’s not like we just started to not pay attention.”

Despite a national conversation about race and institutional bias, and local soul-searching about Pittsburgh’s ability to redevelop into a fairer city, the report describes an environment where growing up is exceedingly unfair – and more dangerous – for the region’s black girls.

as likely to be raped as white girls.

as likely to have someone close to them murdered.

Black girls are twice as likely to be raped.

They are far more likely to be threatened or hurt with a weapon.

They are nine times more likely to have someone close to them murdered.

Violence is a common issue discussed at the Gwen’s Girls group home, which recently reached its capacity of 15 girls.

Nicole said the cycle of violence and funerals seems to replay over and over.

“We’re losing friends that we’ve been in elementary school with,” she said. “And it’s like, now they’re gone.”

Nicole’s getting ready for a new life.

She’s been seeing her mom — she’s cautious, but things are going well —  and she thinks returning to Gwen’s Girls was the right move.

She’s learning from the other girls and seeing how many of them are adjusting to motherhood themselves.

Nicole is scared, too. She knows the support she’s found here is not permanent. Life will be difficult in totally new ways as she learns to support her son and get through 11th grade.

With the worries and struggles she’s already faced, she’s focused on a better life for her son.

“I’m most looking forward to being a great mom,” Nicole said. “I want to be the best mom I can be.”

*Nicole asked that her full name be withheld for privacy reasons. We identify her by her middle name.

**The Heinz Endowments and the FISA Foundation have provided funding to PublicSource.