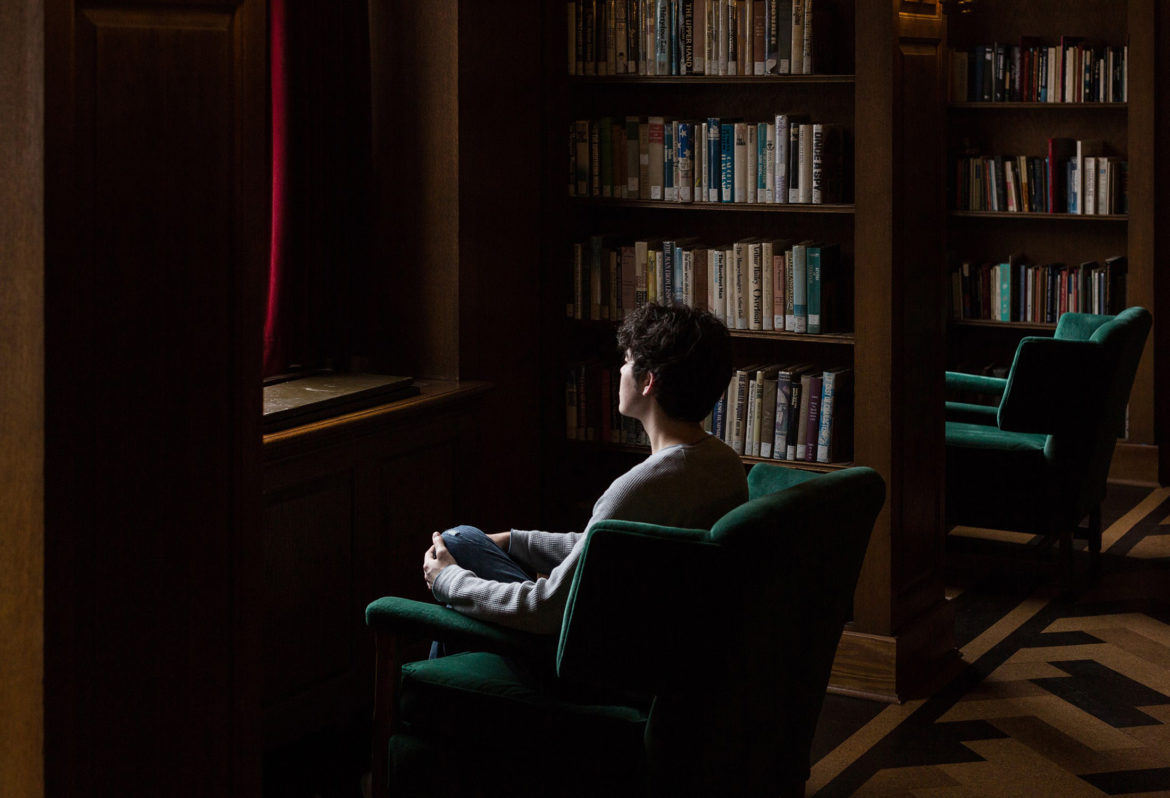 Michael, a freshman at Dartmouth College, poses for a portrait at the Baker-Berry Library on the Hanover, N.H., campus. Michael is not using his last name to avoid being identified. (Photo by Robert C Strong II/PublicSource)

Michael left foster care at age 16 and spent several years with no place to call home. He was wandering the streets and sleeping on others’ couches, in laundromats and eventually his sister’s Pittsburgh dorm room.

You might think he was following a path to failure.

But you’d be wrong.

Michael is now a freshman at Dartmouth College, enjoying the privileges and enduring the rigors of an Ivy League education.

His is not a fairytale story. It’s one of grit and perseverance despite having no home, no money, not even a birth certificate to verify his age. He could be anywhere from 19 to 22, depending on what document is used.

Without a birth certificate, he couldn’t enroll in high school for his junior and senior years. But he found an online program and a job in a restaurant to support himself.

Michael doesn’t want his full name disclosed because his Ivy League classmates don’t know his story. But if telling it helps other homeless youth to pursue educational opportunities, he’s happy to do so.

The most conclusive data available shows only 58,000 college students out of 19.9 million in 2013 identified as homeless in the United States. There are several reasons to believe that number is vastly underreported.

Michael has something to say. Listen here:

Joseph Lagana, the founder of the Homeless Children’s Education Fund, says his Pittsburgh-based organization has begun to see not only a need for food and shelter among students in elementary, middle and high schools, but increasingly among those pursuing a higher education.

Lagana is working with the Pittsburgh Council on Higher Education and local college and university leaders to identify and help homeless students like Michael.

The Homeless Children’s Education Fund awarded Michael a $2,500 scholarship to help with college expenses that don’t fall under the full scholarship he received to attend. But Lagana and others exploring this issue locally are finding the initial challenge is finding the students who need assistance.

Point Park University and the University of Pittsburgh plan to survey the student population about homelessness and housing insecurity this semester in order to gauge the extent of the problem and find what services could help students.

But there are challenges to even a simple survey. “There’s a hard time finding these students. There is a stigma,” said Keith Paylo, vice president of student affairs at Point Park University.

Nicole, who is using her middle name to avoid being identified, is a Duquesne University sophomore studying forensic science.

Not even her roommate knows she was identified as homeless in her freshman year. Nicole’s parents moved to Florida during her senior year of high school while she remained in Pittsburgh. She started out living with a boyfriend’s family, then couch surfing with friends before settling with extended family in Monroeville. There, they asked her to pay rent. Nicole, who is using her middle name to avoid being identified, posed for a photo on the Duquesne University campus. She is a sophomore at the school, and not even her roommate knows she has struggled with homelessness. (Photo by Guy Wathen/PublicSource)

She and Michael don’t want their college relationships to be defined by the label of homelessness. But without extra supports, the likelihood of homeless students dropping out is high.

Nicole has thought about dropping out of college to attend trade school or get a job. But if she quits, she has to start repaying her loans within six months without an adequate salary to do so.

“If I quit school, I have to start paying. If I stay, I’m racking up the amount I need to pay,” Nicole said.

Because Nicole started using her relatives’ address as a permanent address, she is no longer officially considered to be homeless and this year had to borrow $10,000 to cover expenses.

During the summer, she worked 50 hours a week as a custodian, baker and barista to help pay tuition.

“There’s a hard time finding these students. There is a stigma.”

Some university officials are citing a recent federal report focused on dropout rates for foster youth to show the link between educational success and homelessness. Foster youth, like Michael, often face homelessness as they age out of the system. In 2009, nationally only 14 percent of foster youth completed a bachelor’s degree within six years while 31 percent of other students were successful.

Students can self-identify as homeless when they fill out the Free Application for Federal Student Aid.

But to check the box, an official of a federal homeless program or a college financial aid administrator must verify their status each time they apply for federal grants and loans.

“Given the high standard of legal documentation required, the FAFSA forms would only identify a smaller subset of students who are in some form of financial distress,” said George Santucci, the director of financial aid at Point Park University.

It is possible to get a handle on homelessness among college students, though. California State University surveyed its student body from 23 campuses earlier this year and found that about one in 10 of the 460,200 students was homeless.

Now some would argue that students contending with homelessness should attend community colleges. They’re a less expensive option than four-year schools. But it’s not really a solution because they typically don't provide housing.

The Community College of Allegheny County [CCAC], however, is considering building housing at its Boyce Campus. CCAC President Quintin Bullock said the plan was originally devised to reduce transportation issues and to offer a more traditional college experience. But he now sees how on-campus housing could be helpful to homeless students — ‘a handful’ of whom have identified themselves to the school.

At Point Park, administrators have considered making residence halls available in the summer for students who have nowhere to live when school is out of session.

Providing housing when school is out of session has helped students without stable homes who attend the West Chester University of Pennsylvania, about an hour outside of Philadelphia. The university has provided housing and meals for homeless students during the summer months and holiday breaks since 2013.

“It’s mind boggling when you explain to people that there are students who even though they were living in shelters or lost their parents still made it to college.”

Lodging costs are covered by the West Chester Foundation, and meals are paid for by a private donor. Last summer, about 10 students stayed on campus. Currently, West Chester has 28 homeless students among its enrollment of 16,000.

“It’s mind boggling when you explain to people that there are students who even though they were living in shelters or lost their parents still made it to college,” said Tori Nuccio, assistant director of financial aid at West Chester University. “But they don’t have the basic essentials and it starts stressing them out as soon as they get to college.”

Recently at West Chester a student was discovered sleeping in a common area on campus, another student admitted to living out of a van and another used his financial aid for his family members to stay in a hotel.

The students were identified by staff trained to recognize red flags that could indicate a student is homeless or struggling financially. Not completing class work. Not attending class at all. That could be because they’re staying with friends far from campus or didn’t have access to the Internet.

Nuccio said some are rejected for reasons such as students not supplying information about their parents. That can happen because their parents aren’t in their lives, which means they could be designated as an unaccompanied adult and qualify for financial aid.

Michael was helped in his journey to Dartmouth by QuestBridge, an organization that connects bright, low-income students with elite colleges and universities.

Both Nicole and Michael said it’s difficult to be on campuses where many students have far more resources.

“The complaint is honestly how difficult it is to navigate a campus where over half of the student body comes from families making $300,000-plus a year and the fact that my campus is situated in an incredibly expensive area,” Michael said in an email. Michael, a freshman at Dartmouth College, plays piano in a student center on the New Hampshire campus. One of the resources he has found the most rewarding is the college's faculty of professional piano instructors. "I started playing piano this past term and ...it's something I really, really, enjoy," he wrote in an email. (Photo by Robert C Strong II/PublicSource)

He has a scholarship to cover room and board, but to pay for books, school supplies and day-to-day needs, he works three part-time jobs as a tutor, note-taker and employee in a program that provides food to low-income students when dining halls are closed.

Michael plans to work with homeless students in the Pittsburgh Public Schools and those with the QuestBridge program, and he manages a private Facebook group through which he matches homeless college students with homeless high school students as mentors.

During Michael’s struggles to complete high school and get to college, he had to fight the stigma that he was less capable than his peers. Now he wants to help others through that process.

“I didn’t need someone to tell me I could do less. I needed someone to believe that I could be every bit the student that my peers were, even when I didn’t always have the resources they did.”