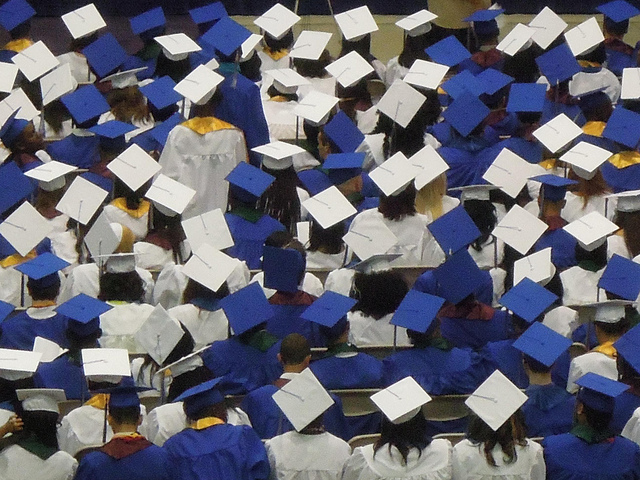 It seems like everyone is going to college these days. And then more college, just packing on the degrees. But that’s not really the case.

In fact, the Economic Policy Institute reports in a new study that only about 10 percent of people ages 17 to 24 had a bachelor’s or advanced degree as of February 2016. Among them, whites were at least twice as likely to have achieved degrees when compared to their black and Hispanic counterparts.

Many people in this group will move on to graduate, but there are several who will sign up and never finish because of family and financial responsibilities, according to The New York Times article on the study.

The job market isn’t very kind to this group.

Unemployment rates for high school graduates is almost 18 percent. When you factor in these young adults who can only find a part-time job or have given up the search, it’s 33 percent, the story said.

The average hourly wage for high school graduates has also dropped since 2000, regardless of the increases in minimum wage many municipalities and states have made, according to the the Economic Policy Institute.

Some efforts are being put into improving the experience and mindset surrounding career, technical and vocational schools.

“Without question we have failed to pay attention to and invest in opportunities for young people who are not on a path to go to four years of college,” said Chauncy Lennon, the head of work force initiatives at JPMorgan Chase, which has started a $75 million program to design and deliver career-focused education in high schools and community colleges.

There’s a growing demand in certain sectors for younger workers with this experience. Lennon told the Times that there’s a need for radiology and phlebotomy technicians, and workers in advanced manufacturing, aviation and mechanical maintenance.

In Allegheny County, PublicSource reported last year that employees of the advanced manufacturing industry who are Baby Boomers will leave a void as they retire over the next 20 years.

The Allegheny Conference on Community Development estimates that the working-age population in the region is composed of 144,000 more people aged 45 to 65, mostly Baby Boomers, than people ages 25 to 45 (the Gen X-ers and Millennials). ...In some industries, such as advanced manufacturing — which currently has one of the region's oldest workforces with more than half of employees in their 50s — the gap is even larger.

There’s a group of 3.2 million people who have it even worse than the high school graduates.

They are ages 16 to 24, not in school and have no job, a Brookings Institution researcher told the Times. In many communities, youth who are black and Hispanic are three to five times more likely to be a part of this population.