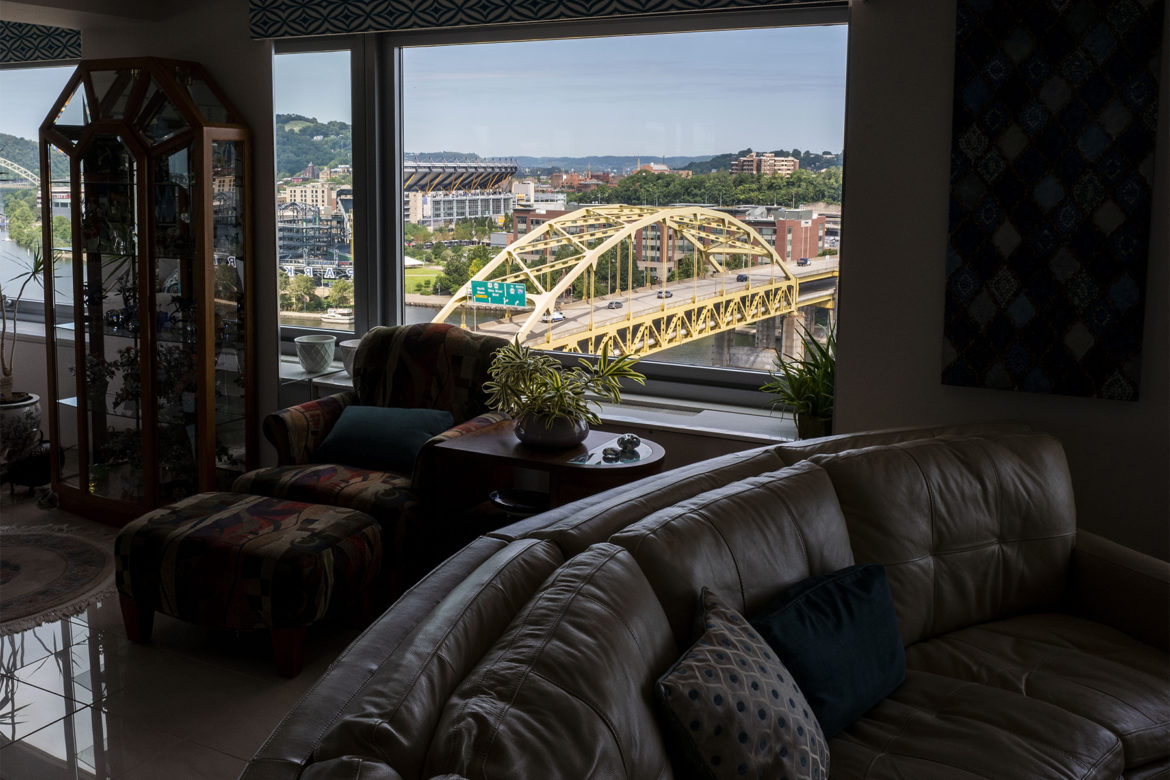 A view from condominium of Fred and Nancy Hrynkiw in Gateway Towers. (Photo by Nate Smallwood/PublicSource)

Since moving to Gateway Towers five years ago, Nancy and Fred Hrynkiw hardly need to turn on the TV for entertainment. They just look out their windows.

From their 17th floor unit overlooking the Point, they enjoy dazzling displays of sunsets, fog rolling over Mt. Washington like swabs of cotton and groups of ducks swimming along the Allegheny River. When Billy Joel performed at PNC Park in 2016, the couple kicked up their feet and sipped white wine.

But all is not well in their corner of heaven.

For the past four years, the Gateway Towers Condominium Association and eight of its owners have been locked in a legal battle over a special fee to replace windows and fix leaky water pipes and pipes moving waste.

Opponents of the fee say association rules for major work require a vote and approval by the vast majority of homeowners — an argument accepted by the courts. Proponents say condo rules do not require a vote for fixing common elements, parts of the building available to all owners.

No one believes the building is in danger of collapse. But some residents likened the bickering to the quarrel over proposed repairs before the July 24 partial collapse of a condominium building that killed 98 people in Surfside, Fla.

“When I read the articles about the infighting and things that have gone on at Surfside, the frustration of board members, I’m thinking I’m reading of Gateway Towers. It’s so hard,” said Loretta Hoglund, president of the condo association.

Roots of a dispute

Designed by Emery Roth & Sons of New York City, Gateway Towers opened in 1964 as a luxury apartment building at 320 E. Fort Duquesne Blvd., Downtown. The 27-story slab building faces the Allegheny River on one side and Gateway Plaza on the other. The edifice was part of the 23-acre Gateway Center built during the first Pittsburgh Renaissance.

The complex transformed “Pittsburgh’s image from a ‘Smoky City’ to a gleaming modern showplace (that) caught the nation’s attention,” according to the center’s 2012 nomination to the National Register of Historic Places, describing it as part of “one of the great U.S. urban redevelopment successes,” despite criticism over displacement in the Lower Hill District.

Gateway Towers was converted to condominiums in 1979-80 and sold at auction in 1987. Nowadays, about 400 people live there in about 270 units, Hoglund said.

The current dispute started in 2015 when two 5-by-8-foot window panes fell from the Towers and smashed on the pavement below. In response, the condo board hired an engineering firm and proposed a $5.3 million project to replace over 1,200 residential windows as part of an infrastructure plan that included different options.

Owners pay a monthly condo fee for ongoing expenses such as lawn care, snow removal and security. They also may pay a special assessment to build up the reserve fund for unusual, big-ticket items.

Besides new windows, the most expensive version of the infrastructure plan would have replaced the heating and cooling system and installed waste stacks and louvered metal plates below the windows to allow for fresh air.

This option would have allowed homeowners to control heating and cooling in their own units. The total cost: more than $21 million, including the new windows.

For that version, residents would have paid a special assessment ranging from $39,835 to $109,392 for each home, depending on square footage, from 2017 to 2022. The board also offered homeowners options for spreading the cost of the assessment over time through loans.

In 2017, some opponents filed a lawsuit seeking a temporary injunction against implementing the infrastructure plan unless the board first followed the regulations of the condo association. Those rules require favorable votes by at least 75% of owners and of mortgage institutions before making alterations or improvements to the building.

“I have no quarrel with the desire or the proposal to replace these antiquated systems,” said Scott Hare, attorney for the plaintiffs. “All we’re saying is the association must comply with their own code of regulations.” 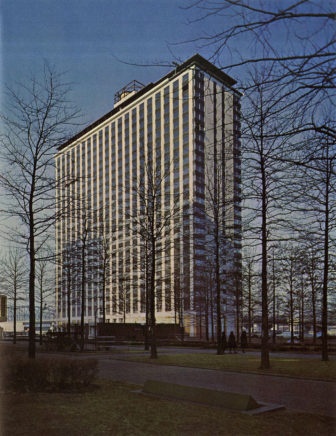 Proponents argue that replacing old components like rusty pipes in common areas is maintenance, not an improvement, and does not require a vote. They also consider 75% approval a herculean bar.

Opponents argued that the assessment would impose a financial burden on residents, some of whom are retired. The crux of the case, though, turned on what work amounted to maintenance and what was alteration or improvement.

Mark Baker, a consulting engineer for opponents to the assessment, testified that removing and installing new windows would be an improvement “without a doubt.”

In a May 2017 memorandum to the court, Trisha A. Gill, attorney for the condo association, pressed the urgency of its plan to replace windows. “Catastrophic personal injury and even death of a pedestrian could result from a falling window pane that measures 5 feet by 8 feet,” she wrote.

John Valentine, executive director of the Downtown Community Development Corporation, has lived in Gateway Towers for 17 years. Although not a plaintiff, he opposes the board’s handling of the repairs.

“It’s not that any one of us don’t want to get the work done,” he said. “We think we can do it at a fraction of the cost.”

Hoglund countered: “I would wonder what facts his statement is based on. It’s very easy to say he can do this for much less.”

In 2017, Common Pleas Judge Christine J. Ward issued a temporary injunction — stopping any major work in the building without a vote of homeowners. Two years later, the Superior Court of Pennsylvania upheld it upon appeal, noting that condo regulations do not define what is maintenance and what is an improvement.

As a result, the board started a voluntary program to replace the windows. The Hrynkiws participated, spending $50,000 to replace 10 windows. The old ones were so cloudy and drafty that the couple could not take pictures through  them,  and Nancy Hrynkiw used to wear a shawl when she was sitting in their entertainment room.

In September 2020, the board introduced owners to Plan2020, which phases in parts of the infrastructure plan over 13 years. Hoglund said in an email that the cost of the plan is $13.8 million over 10 years. The first priority, if it moves forward, is replacing the risers, which are vertical pipes that run hot and cold water in the building.

Hare called the revised plan "old wine in a new bottle." By proposing the work on risers, he argued, the board was "thumbing their nose" at the injunction, which prevents major work without the consent of owners and mortgage institutions.

A view of the river from the condominium of Fred and Nancy Hrynkiw in Gateway Towers. (Photo by Nate Smallwood/PublicSource)

In March, owners at Gateway Towers began paying a special assessment totaling $1 million over a year, depending on square footage, to build up the reserve fund. The injunction does not require a vote on charges for that purpose.

“You have to maintain your home and this is your home,” said Nancy Hrynkiw, who served as president of the association between 2019 and 2020. “Just because you’re part of a condominium community, you can’t avoid maintaining your infrastructure.”

The spat has resulted in hard feelings. Board member Scott Sneddon said some of his colleagues have been called “liars and crooks” at board meetings and in anonymous letters slipped under owners’ doors.

“This has resulted in an emotional toll on a lot of board members. It’s absolutely exhausting,” Hoglund said, sighing.

The disaster at Champlain Towers South, a 12-story beachfront condominium in Surfside, is still under investigation, but theories abound as to why it happened.

According to the New York Times, a consultant three years ago warned of “major structural damage” to the concrete slab below the pool deck, “abundant” cracks and crumbling columns. Residents bickered about how to raise the $15 million to repair the roof, pool deck and support columns. With only $800,000 in reserves, the homeowners’ association asked owners to pay special assessments ranging from $80,000 to $200,000 on each unit.

The price tag created an uproar among residents, as special assessments often do around the country.

“This affects people in their pocketbook so they respond strongly,” said Tom Skiba, CEO of the Community Associations Institute, a group in Falls Church, Va., that represents 355,000 homeowners associations, condominium communities and cooperatives in the country.

“At some point, you can’t just piecemeal the solution to these problems.”

In the wake of Surfside, the institute charged task forces with examining issues such as how much money homeowner communities need to keep in reserve.

Eleven states require condo associations to set aside money for major repairs. Nine states require studies of reserve funds or a schedule for repair and maintenance of major components. Pennsylvania does not.

Skiba, who is unfamiliar with the dispute at Gateway Towers, expressed surprise that the city of Pittsburgh did not weigh in on the falling windows. Hoglund said the city never contacted the condo association about the incidents. A city spokesperson said she didn’t know if the city contacted the association in 2015, noting that any notice of violation on file would have been sent to individual owners.

As to the central question of what’s a repair and what’s an improvement, Skiba wondered how many times a building can patch leaks before it becomes a systemic issue.

“At some point, you can’t just piecemeal the solution to these problems,” he said.

A potential end to the case may be in sight. Judge Ward recently announced a hearing on a motion to make the injunction permanent will take place at 9:30 a.m. Dec. 7.

“This has been an extraordinarily lengthy proceeding,” she said.

Interestingly, both sides agree on this point: the dispute may reduce property values or their ability to sell their homes.

In a May 2017 court document, plaintiff James Logan blamed his initial inability to sell his units on their combined $152,000 assessment fee. He declined to comment for this article and has since sold one of his units.

Likewise, Sneddon said the injunction spells the death knell for maintaining the building — discouraging people to move in. “The value of my property will be diminished,” he predicted.

The Hrynkiws, meanwhile, keep admiring the views through their new windows. They have no immediate interest in moving.

“It’s five and half years, and when we open that door,” Nancy Hrynkiw said, pointing and whispering with near reverence, “we say, wow, what a great place.”

Bill Zlatos is a freelance reporter in Ross. He can be reached at billzlatos@gmail.com.