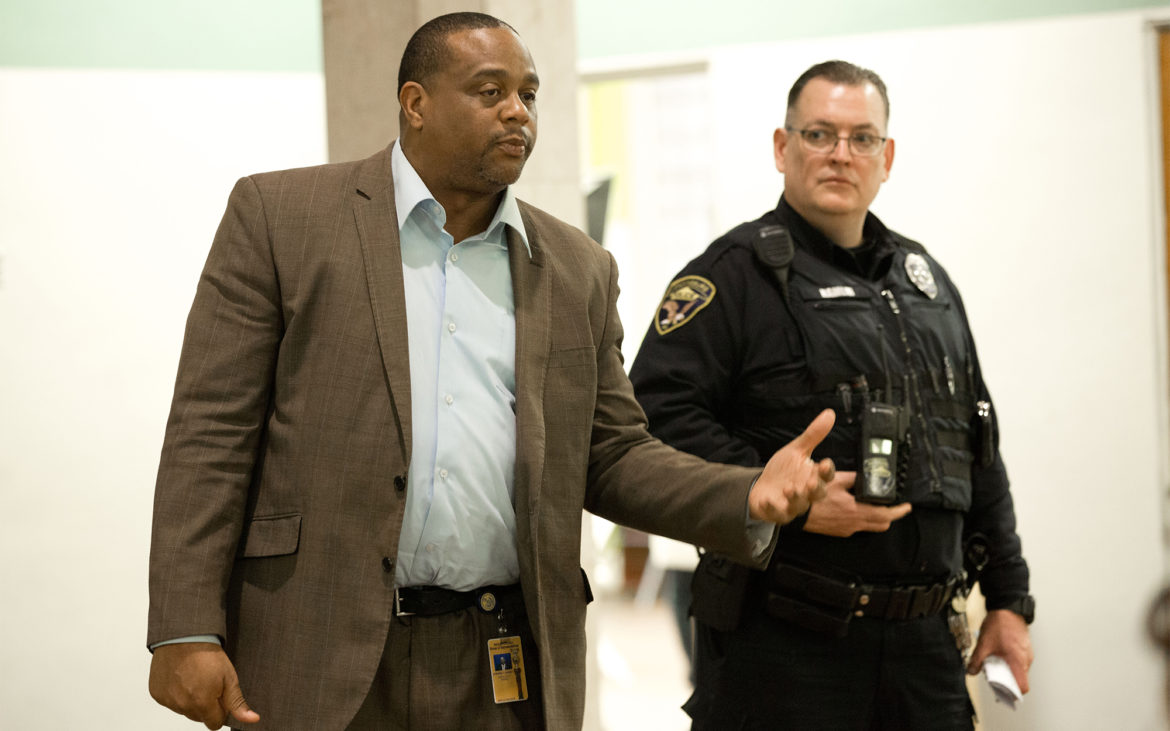 Pennsylvania State Rep. Ed Gainey fears he’d be shot dead during a mass shooting if he were a gym teacher armed to protect a school. In that scenario, he imagines being seen by a police officer who doesn’t know him, who only sees an unknown black man with a gun, and wrongly pulls the trigger.

“He’s got a second to think. My life is gone,” said Gainey, D-Allegheny, at a community meeting in Wilkinsburg on Wednesday evening focused on the concerns of arming school teachers and staff in the state.

Wilkinsburg police officer Don Hamlin acknowledged to a crowd of about 20 people that an officer in a crisis scenario could wrongly target an armed but well-meaning individual.

“The police may accidentally shoot one of these teachers who we don’t know is one of these teachers packing a gun,” Hamlin said outside the meeting, which was convened by local groups concerned that a state bill to arm teachers and school staff could gain momentum after a Feb. 14 mass shooting at a high school in Parkland, Fla.

The bill, which was among the topics discussed throughout Thursday morning and into the afternoon at a hearing before Pennsylvania’s House Education Committee, envisions a different reality. School districts could decide if personnel should be armed and, if so, the districts would be required to coordinate with local law enforcement.

Sen. Donald White, who represents rural portions of Western Pennsylvania, introduced SB 383 a year ago so employees in a shooting have “more choices than just locking a door, hiding in a closet or diving in front of bullets to protect students,” a 2017 memo says. 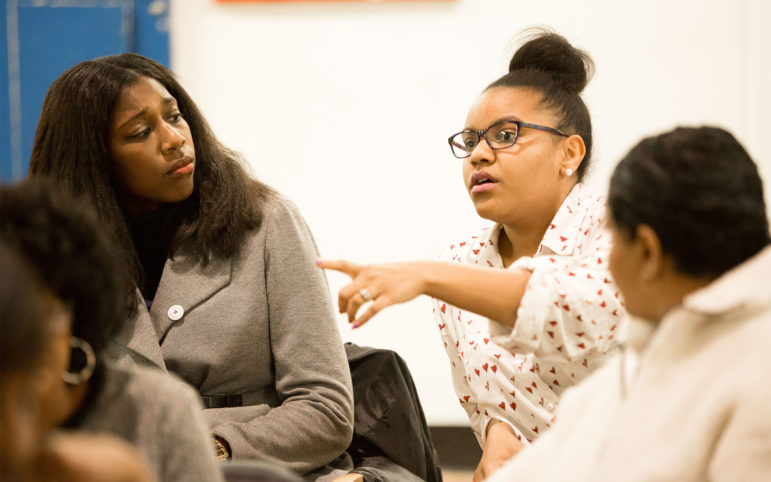 The comments are similar to those made by President Donald Trump after the Parkland shooter took 17 lives. Trump expressed support for arming teachers; so has the National Rifle Association.

Since the Parkland shooting, the classroom is again a battleground in the debate over whether there are too many guns or too few people with firepower to protect the vulnerable.

Hamlin, who also works as an armed officer in the Brentwood Borough School District, said that the teachers he’s spoken with are opposed to carrying weapons even after what happened in Florida.

“None of them ever feel comfortable and made it clear that they would not volunteer,” Hamlin said.

Currently, 10 states allow teachers to be armed, according to a recent Washington Post story examining the pros and cons of arming teachers in Ohio.

White’s current bill to allow arming teachers in Pennsylvania is his latest attempt to get this legislation passed. The bill passed the state Senate in June but has since languished in the House Education Committee.

“Can you imagine anything worse than somebody shooting the students that you know and love and not being able to stop them?”

According to White’s bill, if a school board wants to arm personnel, it would be required to file a firearm safety plan with local law enforcement. The plan would identify school personnel who carry firearms and cover how police and school staff coordinate the response to an emergency. The public would not be made privy to the details of the firearm safety plans; the bill would exempt these plans from disclosure under Pennsylvania’s open records law.

White’s bill would not mandate any action to be taken but merely give school boards explicit authority to create plans for the arming of school personnel. The senator does not believe current state law prevents the arming of teachers, only that the law needs clarity, according to his memo.

The proposed bill states that school employees must be certified to carry firearms but does not define specific requirements.

Rob Conroy, director of organizing for CeaseFirePA, criticized the language in the bill as a “smokescreen” because the training required is not described beyond the naming of certifications that he said appear to be for law enforcement, rather than the general public. CeaseFirePA has asked the Pennsylvania State Police to clarify but he said he has not received a response.

A State Police spokesman said the agency has not approved other unnamed programs which the bill references as possibly fulfilling the certification requirement. 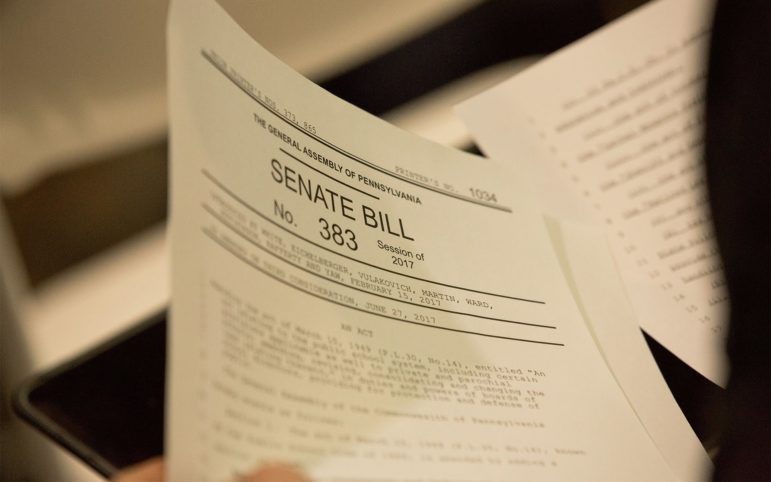 Senate Bill 383 is the latest push in Pennsylvania to empower school boards to arm teachers. (Photo by Heather Mull/PublicSource)

Dolores McCracken, president of the Pennsylvania State Education Association, acknowledged that some of her group’s members support arming educators but the group’s leadership has decided to oppose White’s bill.

“There are proven safety measures that do not involve the risks and dangers of adding thousands of guns to our schools,” McCracken told House lawmakers.

As alternatives, she stressed the need to invest in safety grants, focus on the mental health of students, protect federal funding and invest in resources to predict, prevent and respond to school violence.

But to Mark Zilinskas, a math teacher in Indiana, Pa., prevention is not enough to stop a mass shooting. He told lawmakers that he’s one of the teachers who approached White to push a bill to arm teachers, first after the Sandy Hook Elementary shooting that left 20 children and six adults dead in 2012.

“Do they pull the gun out because they’re nervous now? Because this big kid is charging them?”

Zilinskas said he’s prepared to take action if a shooter enters a school instead of waiting for police or hiding behind a door.

“Can you imagine anything worse than somebody shooting the students that you know and love and not being able to stop them?” said Zilinskas, who has taken training available to teachers in Ohio.

In Schuylkill County’s Blue Mountain School District, Superintendent David Helsel told lawmakers that maintenance staff — currently only one employee due to a retirement — are also trained as armed security and have been carrying firearms for five years.

The district does not plan to arm teachers, but Helsel said he believes each district should be able to make its own determination to have a trained and clearly identified armed staff. He also explained that each classroom has a five-gallon bucket of river stones to be thrown at an armed intruder that breaks through the door.

“They will face a classroom full of rocks, and they will be stoned,” Helsel said. 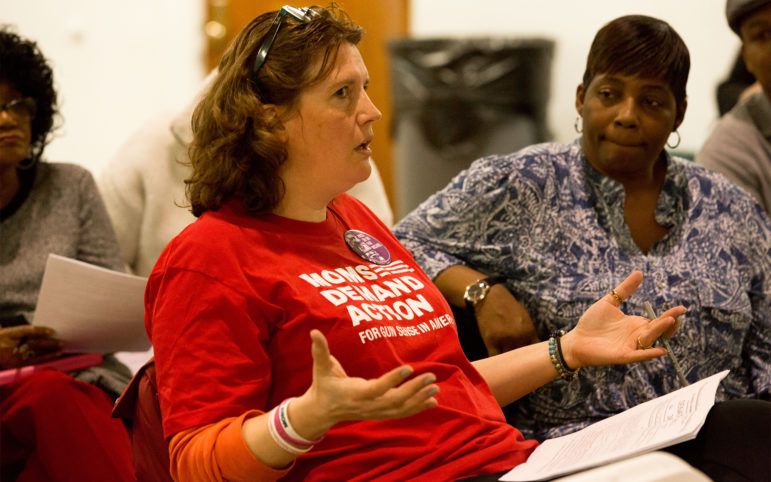 At Wednesday’s community meeting, Wilkinsburg School District board member Ashley Comans said she fears arming teachers would harm students. School boards, she said, have no expertise to try to arm teachers, and she worries teachers will make bad decisions that could specifically harm students of color and those with disabilities.

For instance, if a large child with autism rushes a teacher and a teacher is fearful, what happens?

“Do they pull the gun out because they’re nervous now? Because this big kid is charging them?” Comans said.

Wilkinsburg Mayor Marita Garrett said the borough is “absolutely not” in favor of arming teachers. The borough’s older kids are sent to Pittsburgh Public Schools, where police are unarmed. The school board last year took no action after a request by the teacher’s union to arm officers.

Amy Raslevich, a volunteer with the Pittsburgh chapter of Moms Demand Action, said she is concerned about accidents – for instance a recent accidental shooting in California that wounded three in a gun safety class – and teachers making wrong decisions.

“We’re going the wrong direction about how to prevent gun violence,” she said.