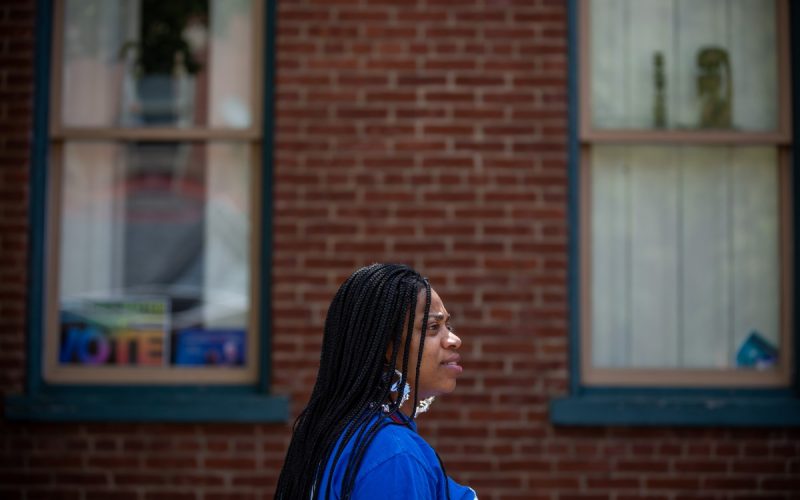 Jala Rucker is a community health worker in Pittsburgh, Pennsylvania, working with patients in her northside neighborhood of Manchester through Project Destiny. Photo: David Smith/100 Days in Appalachia

This article was originally published by 100 Days in Appalachia, an independent, non-profit digital news publication incubated at the Media Innovation Center at the West Virginia University Reed College of Media. Sign up for their weekly newsletter here.

“Housing is health care,” says Jala Rucker, “a community health worker with Project Destiny in Pittsburgh. “It’s hard to think about anything else when your shelter is at risk.”

Project Destiny provides a variety of services to residents of otherwise underserved communities on the city’s northside. About 75 percent of the residents of these neighborhoods are Black, including a number of immigrants from throughout sub-Saharan Africa. Rucker serves as a liaison to health care and other services.

First and foremost, she listens.

Rucker’s path to this work began about six years ago, when she helped organize 86 families in her Manchester neighborhood who, along with her own family, were in danger of being evicted. The families were successful in their campaign to remain in their homes. She’d found a calling, one rooted in the power of place.

Rucker says she can relate to those she assists. “I come and knock on the door and have a glass of ice water, sit on the front porch,” she says. She assures them, “‘I walked in the same shoes that you’re walking in.’” She listens to their stories.

Throughout Appalachia, in rural and urban and communities alike, a cadre of individuals are addressing their neighbors’ health care needs in the setting in which the most transformative change can occur: the community, the home.

Awareness is mounting among those in public health that the social determinants of health – the everyday exigencies of our lives – affordable housing, living-wage jobs, transportation, good schools, safe streets, social justice – often have a more profound effect on our health than medical care or genes. Increasingly, medical research shows social determinants are at the core of health disparities.

Systemic disparities in access to our most fundamental needs – disparities rooted in one’s race or ethnicity, socioeconomic status, gender, sexual identity, disability, age – result in systemic health disparities, which have been further underscored by the coronavirus pandemic.

Community health workers assist and advocate for those who’ve been untreated, mistreated, misdiagnosed, unseen and unheard; those who, for any of a multitude of reasons, our nation’s health care system has failed. Their work most typically begins with a request: “Tell me about yourself.”

Shreya Kangovi, founding executive director of the Penn Center for Community Health Workers in Philadelphia has said of these workers that they’re “not just another niche workforce.” Rather, they’re the way our health care system “course corrects to inclusion.”

“One is that they share life experiences with the people they work with,” she says. “That could be growing up in the same community, speaking the same language, sharing a pivotal life event.” It could be involvement with the criminal-justice system or having served in the armed forces.

The second is their ability to build trust.

CHWs go into their patients’ homes to provide fundamental care, such as monitoring vital signs and reviewing prescription use, and discuss quality-of life issues: diet, exercise, sleep. They connect patients with other resources. They attempt to provide them with whatever they need to best take care of themselves.

Stephanie Bowman is a nurse practitioner, certified diabetes educator and the clinical liaison for the community health worker program at Marshall University’s Joan C. Edwards School of Medicine in Huntington, West Virginia. Prior to joining the program, Bowman recognized the value of community health workers but wasn’t sure how they fit into a clinical care team.

She thought, “Surely there’s a certification; surely there are letters behind their name that make them qualified for this position.”

What Bowman learned, rather, is that the credential CHWs carry is their capacity to engender trust, born of that shared experience.

They launch a dialog; they learn their patients’ history. They translate the clinical into plain English and offer guidance, empathetic to the barriers to healthy living this person is facing. “Are you taking your meds as prescribed?” is an important question. More fundamental, though, is, “What do you need to better focus on your health?”

In the home, they’re able to gain a sense of the scope of needs, things about which “in the clinic, we don’t ask, and they don’t tell,” Bowman says. That absence of insight “creates a barrier to care.”

Community health worker initiatives have a deep history. Their lineage is traced at least as far back as the barefoot doctors movement in mid-20th century China. In the 1960s and ’70s, CHW programs proliferated, mostly in developing countries. But with many failing to meet expectations, there was a decline in the 1980s.

In 1998, a National Community Health Advisor Study identified core CHW roles, competencies and qualities. In 2007, the Health Resources and Services Administration released a report that offered guidance to insurers and government for inclusion of CHWs in a cost-effective delivery of health care services.

In 2014, state Medicaid agencies were given the option to reimburse for more community-based preventive services, including CHWs.

There are some 60,000 community health workers in the U.S. today. According to a 2014 survey, 90 percent are female and about two-thirds are Black or Latinx.

A Centers for Disease Control and Prevention assessment determined that CHW programs offer “improved health-related outcomes,” including access to and use of care, disease self-management and “social outcomes in a wide variety of urban, rural, clinical, community, emergency department, and regional settings.”

The Penn Center for Community Health Worker’s analysis of three trials of CHW interventions in high-poverty communities indicated that a standardized CHW intervention reduced days of hospitalization by two-thirds.

The center’s research concluded that, within a year, every dollar invested would return $2.47 to an average Medicaid payer, and that if scaled up to serve 15 percent of the Medicaid population, CHWs could save $46 billion annually.

Community health worker programs are active throughout the Appalachian region, with eastern Kentucky having the highest concentration.

“We have to meet them where they are,” Melissa Justice, the health center’s CHW project director, says of those her team serves.

What that means, for example, is being mindful that many have limited access to healthy foods; that quite a few rely on what’s available from food pantries. It means asking permission to look into their kitchen cabinets and read food labels together.

Meeting them where they are may mean detecting evidence of domestic violence or identifying subtle stress factors in the home. It could mean finding resources to help pay the power bill or a ride to the market.

“You form these close bonds, and they trust you, and they believe in you, and it helps them believe in themselves,” Justice says. Her community health workers, she says, help foster resilience.

Justice and her team have formed such a bond with Melissa Kennedy. Among the conditions Kennedy, 54, was suffering from were rheumatoid arthritis in her lungs and joints, type 2 diabetes and hypertension.

Williamson Health & Wellness Center CHWs teamed with her to gradually improve her diet and to exercise. Justice would call Kennedy in the morning to encourage her to get out of bed. “She would say, ‘Well, now that you’re up, why don’t you go for a walk?’” Kennedy says.

In Pittsburgh, Project Destiny takes a resident-driven approach to its work, says Rev. Brenda Gregg, its founder and executive director. “We will work on what they say first. What we’ve always said is that it’s like an onion. They get to know us, and they start peeling back.”

Incrementally, she says, people open up, revealing, for example, that they’re sleeping on the floor.

Having navigated through challenges in her own life, on these same blocks, Jala Rucker guides with empathy.

With the outbreak of COVID-19, home visits were put on hold, but Project Destiny remained a presence.

“We were still in our community,” Daphne Curges, the program’s director of social determinants, stresses. “We stationed ourselves in certain areas of each neighborhood,” distributing food and meeting other essential needs. “We were there.”

The primary concern from the outbreak of the virus, Rucker says, was food insecurity.

“When our children are in school all day, they get a breakfast, a lunch,” she says. “A lot of them go to the after-school program, where they can get a dinner too.”

Local food banks shut down. Transportation barriers were heightened. Rucker leaned into her resourcefulness. She leveraged her connections throughout the community and beyond; she helped organize mutual-aid drives.

On a recent Monday, she was preparing to help distribute fresh produce. “Fresh, and I’m talking about fresh” she says. “Farmers are bringing us fresh produce directly from the farm.”

“I wear many hats,” Rucker says.

The coronavirus pandemic has put into stark relief the nation’s longstanding racial and ethnic health disparities.

The plan calls for the addition of 150,000 community health workers through direct grant funding and adding CHW services as an optional benefit for states under Medicaid.

Community health workers are affecting change, addressing social determinants, one to one and beyond. In Philadelphia, for example, they’ve compiled a guide on what to look for in a boarding house and those to avoid.

The Penn Center for Community Health Workers offers another innovative means of addressing health disparities: a course for medical and nursing students that allows them to apprentice under a community health worker.

“It’s a wonderful way to shape their thinking in ways that hopefully will support them in making better decisions, whether that's in their patient care or their policy work, or whatever happens in their career,” Jill Feldstein says. “I think it's transformative for a lot of them.”

In a podcast on racial inequity and health disparities, Shreya Kangovi said: “We talk about these issues as if they’re separate – COVID-19 disparities and police violence, chronic disease disparities and food insecurity – and they’re all just symptoms of the underlying pandemic of inequity.”

The frontline worker of that pandemic, Kangovi said, is the community health worker.

“I'm able to meet them where they are,” Jala Rucker says. “I’m no different.”

This article first appeared on 100 Days in Appalachia and is republished here under a Creative Commons license.