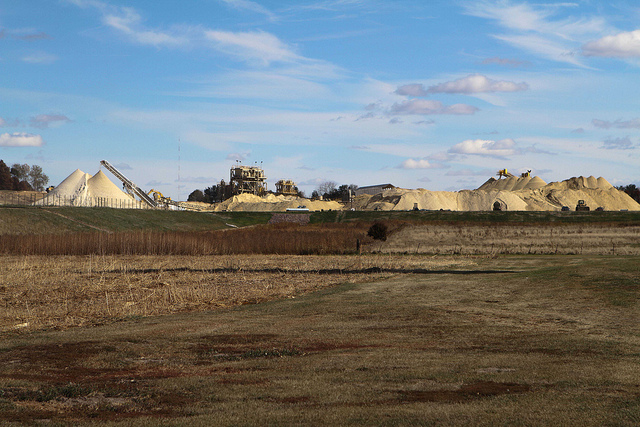 Last week a train hauling frac sand for use in the Marcellus Shale derailed in Uniontown, Pa.

No one was injured, but several train cars landed near homes, spilling their loads of sand. The Federal Railroad Administration is investigating the incident.

The fracking boom has meant that frac sand has become an important commodity imported into Pennsylvania. The sand is used in hydraulic fracturing to help break natural gas free from shale rock. Only specific types of sand can be used, and much of it is being mined from Wisconsin and other upper Midwestern states. The type of sand spilled in the Uniontown derailment was Northern White sand from those areas.

According to Wisconsin Watch, a nonprofit news outlet similar to PublicSource, Wisconsin is the nation’s No. 1 producer of frac sand, with an estimated output of about 26 million tons annually, more than double what it was in 2012.

The increase of frac sand transported on railroads has caused some concerns in Wisconsin.

Wisconsin’s boom in the production of sand used for hydraulic fracturing has fueled a large increase in rail traffic moving the commodity to other states, causing conflicts and raising safety concerns.

While the number of Wisconsin car-train accidents has remained relatively steady in recent years, and derailments actually are down, some residents who live near train tracks used for transporting sand, primarily in western and northwestern communities, complain about noise and traffic delays in addition to safety worries.

Fracking has made the commodity a $10 billion industry, according to a recent MarketPlace article.

Frac sand be hazardous if inhaled over a long period of time, Bernard Goldstein, former dean of the University of Pittsburgh Graduate School of Public Health, told the Pittsburgh Post-Gazette.

“We worry about it mostly from a chronic exposure for workers,” he said.

Check out news coverage about the frac sand industry from Wisconsin Watch, a member of the Investigative News Network, which PublicSource is also a member of. INN is an association of nonprofit news organizations.