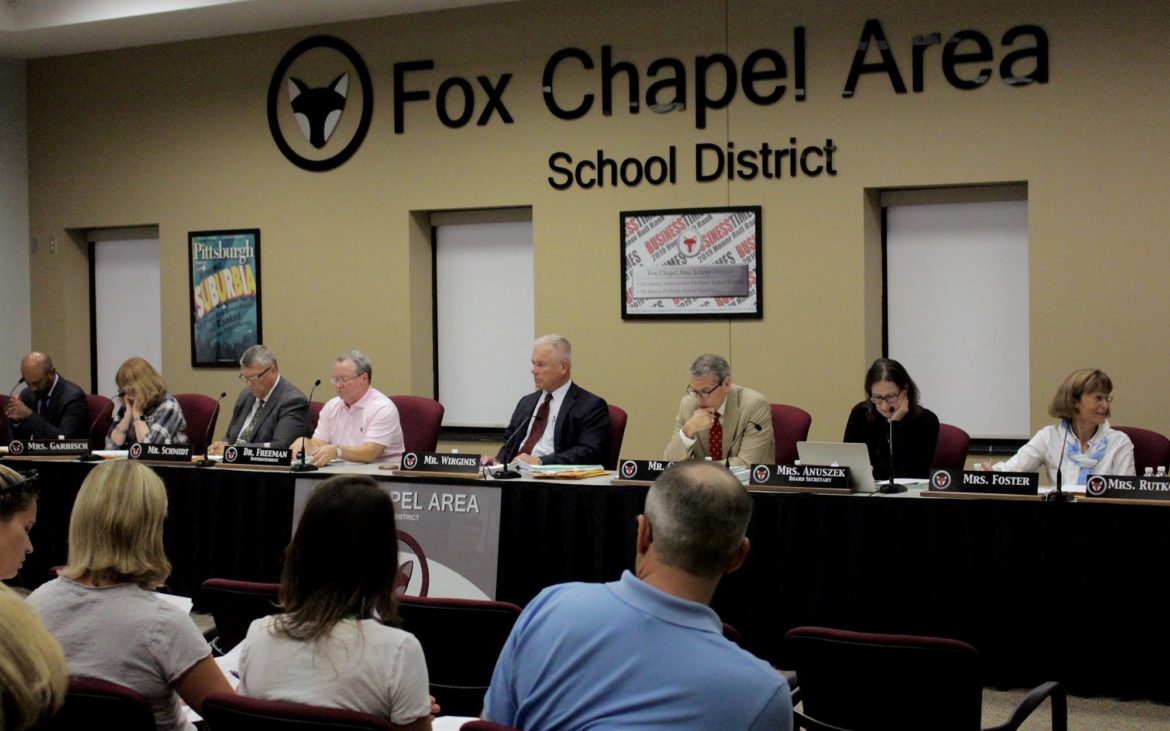 Members of the Fox Chapel Area School District board meet on Aug. 12. (Photo by Jay Manning/PublicSource)

The Fox Chapel Area School District board hired a Butler law firm to act as special counsel in an investigation without telling the public what the investigation is about or how much it would cost the taxpayers. The board retroactively voted to approve the ongoing investigation at Monday's board meeting.

Although the public was not made aware of the reason for the investigation at the board meeting, Thomas Breth, an attorney with Dillon McCandless King Coulter & Graham, contacted a PublicSource reporter via email on Aug. 7, stating he had been “asked to conduct an independent investigation into allegations that employees of the School District inappropriately shredded public records in an attempt to avoid disclosure under the Right-to-Know Act.”

Breth asked the PublicSource reporter who wrote a July story on concerns about lack of transparency in the district to meet with him to “discuss any information that you may have regarding the alleged inappropriate shredding of School District records on or about June 18, 2019.” He wrote that he reviewed “most, if not all” of the Right-to-Know requests submitted by PublicSource. Among other items, PublicSource submitted a request in June for information about what was sent for shredding after being provided a photo of a truck containing bins of documents.

PublicSource referred Breth to its lawyer; as of publication time, he had not reached out.

The topic sparked a heated discussion at the board meeting among some board members and Superintendent Gene Freeman. It also left audience members confused and without answers to a number of questions including why the investigation was started, what details have been uncovered and how much information was shared with each board member.

Board member Edith Cook, the only board member to speak about the investigation at the meeting, said she opposed it. She did not provide details to explain her opposition.

At that point, board president Terry Wirginis warned Cook to stop talking because she was coming close to violating executive session. School board members are permitted to discuss some topics, such as personnel and litigation, behind closed doors and are expected to not speak publicly about those issues.

“Are you asking me to stop talking?” Cook said to Wirginis.

“If you continue, you are on your own pathway and it is not a good pathway,” Wirginis said.

Freeman, appearing agitated, said: “Put out the email. This will all come out … This is ridiculous.”

As Cook continued to talk, Freeman snapped: “Put out the email. She asked for it.” Freeman offered no details about the email to which he was referring.

Board member Robert Mauro suggested the board halt the discussion and vote. Wirginis called for the vote and the hiring was approved by an 8-1 vote with Cook opposing.

Board treatment of Cook was also among the concerns some residents previously cited to PublicSource. They spoke of how other board members stifled Cook’s attempts to initiate public deliberations at board meetings and tabled other efforts she suggested to promote transparency. 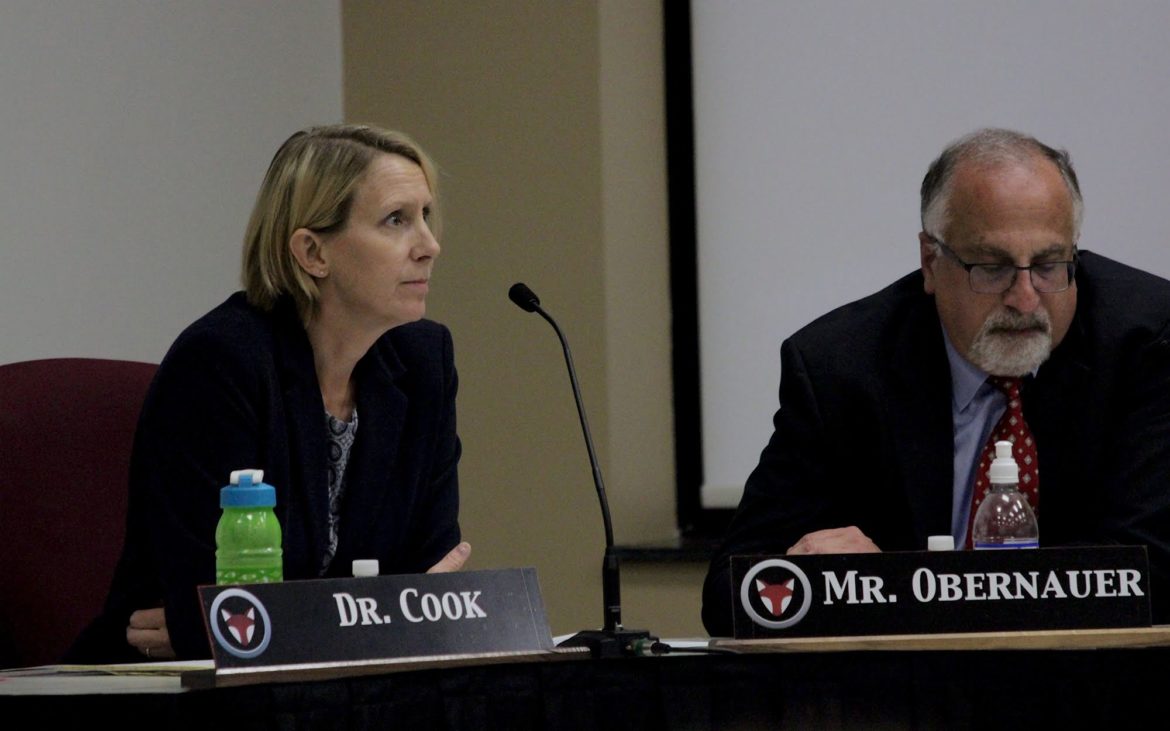 Board member Edith Cook poses a question during a Fox Chapel Area School District board meeting on Aug. 12. (Photo by Jay Manning/PublicSource)

Earlier in the meeting, resident Kelly Caracciolo asked for details about the investigation by the law firm. She pointed out there was no information in the agenda attachments as was the case for other items on the agenda.

“As a parent, should I be worried?” she said.

From a taxpayer standpoint, Caracciolo said she wanted to know the cost of the investigation, whether there was an hourly rate or lump sum being paid and how long it was expected to last. The board did not respond to any of her questions, though Wirginis said late in the meeting that the investigation did not relate to the safety of children.

One of the concerns included in PublicSource’s July story was about bins of documents sent for shredding on June 18, a day after PublicSource filed four Right-to-Know requests.

PublicSource was provided a photo of a Weleski Transfer Inc. truck with bins parked outside of the district administration office.

PublicSource filed a Right-to-Know request on June 19 seeking a log or list of the items sent for shredding the previous day. District Right-to-Know Officer David McCommons responded on June 20, stating the district was taking a 30-day extension before providing an answer.

A final emailed response came from McCommons, also deputy superintendent, on June 26, stating there was “no public record” of the items sent for shredding. 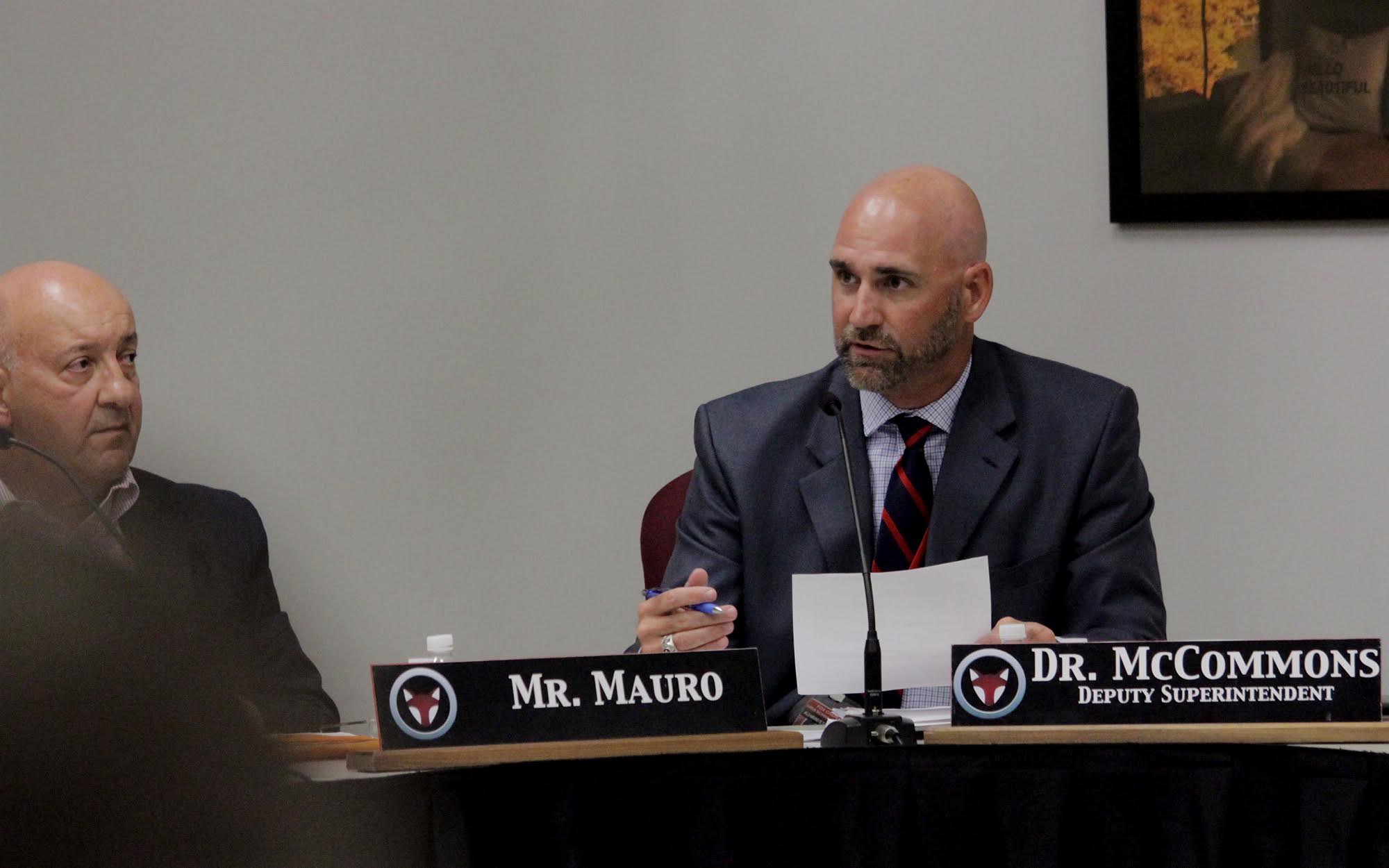 While the district’s response said there is no public record of the items shredded, Freeman told PublicSource in a July 16 email the documents were confidential.

“The district routinely shreds documents, all according to what must be shredded by law and our administrative regulations, which were previously provided to you. These documents often contain personal and confidential information about students and must be shredded. All school districts are required to shred documents of a confidential nature. I’d like to reiterate that what is shredded is confidential information that cannot be shared. Residents should be concerned if documents were not being shredded,” Freeman wrote.

After Monday’s meeting, Wirginis told a reporter it was common for school districts to not keep logs of records that are destroyed.

A PublicSource reporter pointed out to Wirginis that the district has a records management policy and records retention schedule that outlines when various types of documents should be destroyed. Solicitor Paul Giuffre said having those policies in place did not mean the district had to keep logs of the documents sent for shredding.

Neither Wirginis nor Giuffre would offer additional details about the investigation because it is ongoing.

But Wirginis said he expected an “executive summary” of the investigation to be presented at the Sept. 9 board meeting.

Also at the meeting, the board accepted Freeman’s June 12 resignation letter; he plans to retire June 12, 2020. Wirginis said the board would conduct a national search that would not officially start until after the new school board is seated in December. 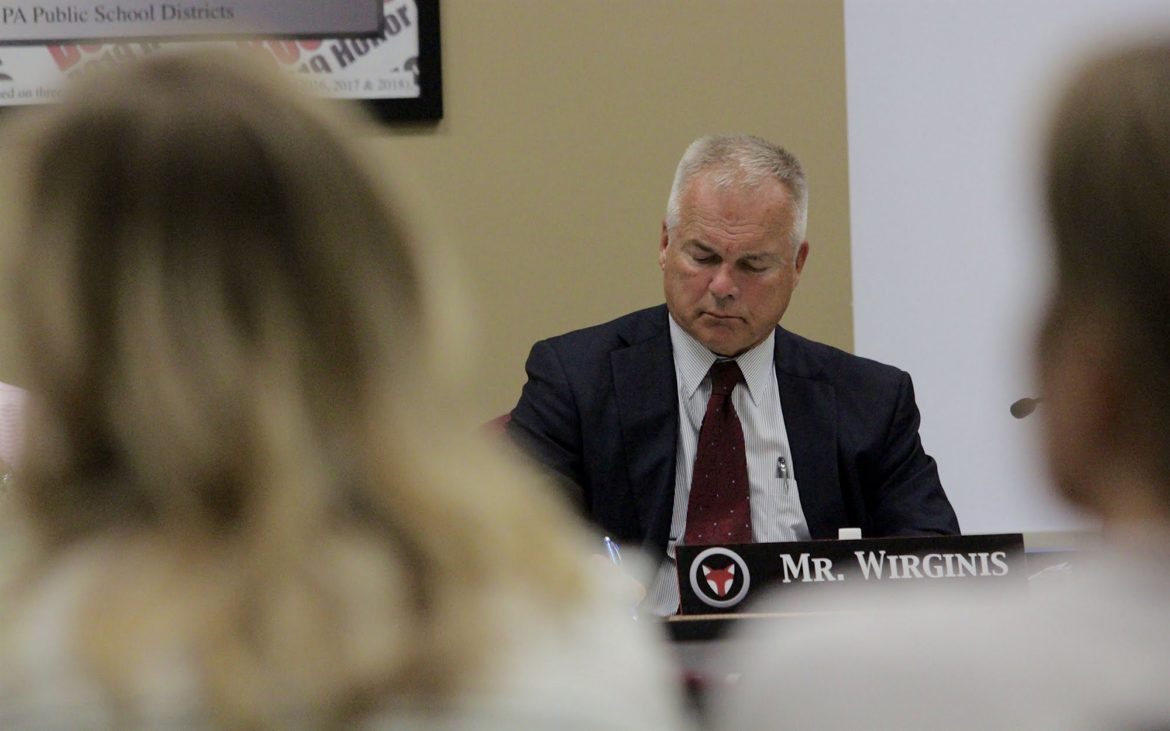 Attorney Matt Peterson of Fox Chapel asked the district to investigate threatening emails his wife, Elizabeth Rambeau, received following a post she made on the district’s Facebook page.

Peterson said the district posted a 10-minute video for “school board appreciation” on the district’s website in January. He said his wife posted a comment saying, “The video was tantamount to political advertising on behalf of the school board incumbents who were extensively featured in the video.”

Within two hours, Peterson said Rambeau received three emails from an anonymous email account referencing the school board election and threatening to “expose” her and for the exposure to “go viral,” Peterson said. He didn’t offer details of what exposure was threatened.

He contended the emails violated a section of the criminal code that outlaws emails intended to harass or alarm and asked the district to investigate. He said he had already raised the issue with the district solicitor.

Wirginis asked Peterson if he would provide a copy of the emails to the district, but Peterson said he feared that would “compromise” his ability to find out who sent them. He agreed to provide a summary of the emails and to have further discussions with Giuffre.

“There apparently exists a climate around this school district where some people think it’s acceptable to behave this way. I find that unfortunate,” Peterson said.