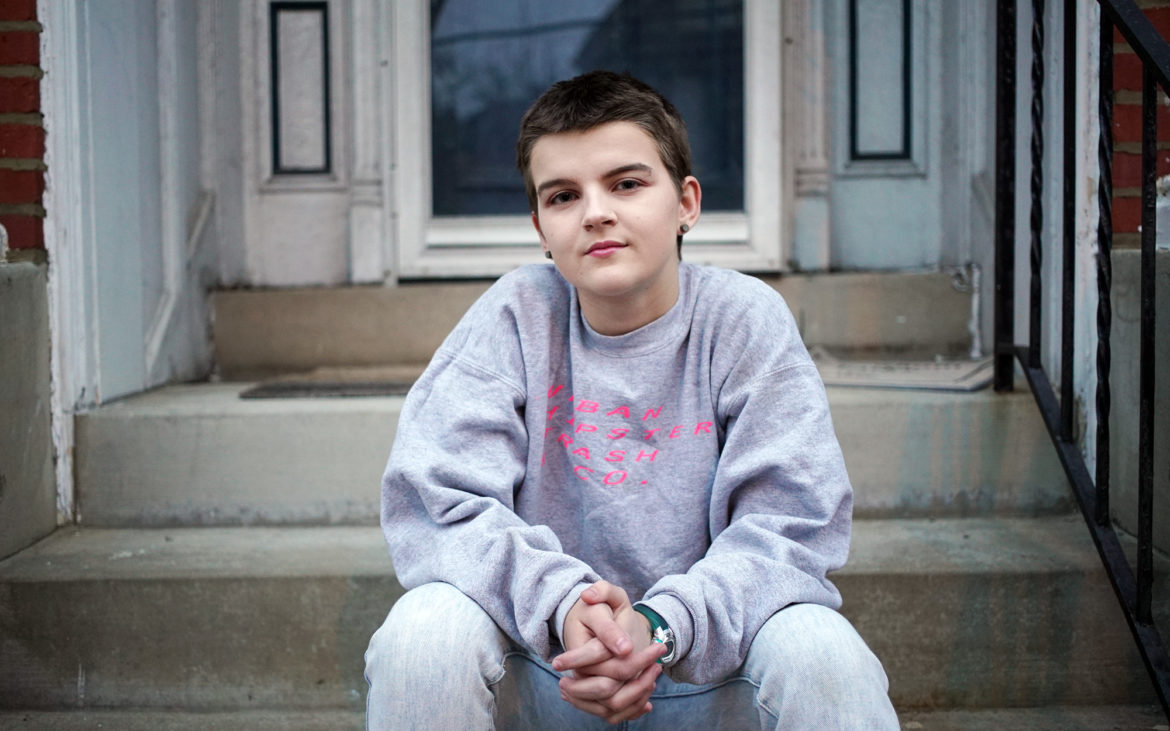 Cody Murphy, 17, is a junior at Allderdice High School. As a 10-year-old, Cody advocated for girls' sports and is upset to still see disparities between sports for boys and girls. (Photo by Ryan Loew/PublicSource)

During the 2010-11 school year, Murphy’s school Linden Elementary was repeatedly canceling girls’ basketball practices so boys could have the court. There was even talk of ending the girls’ team.

After the meeting, Lane mandated all district elementary schools with a boys’ basketball team to have a girls’ team. That mandate lives today — intended to work in concert with federal statute Title IX, which prohibits discrimination on the basis of sex in any educational program that receives federal funding. Now Charlotte Murphy, who goes by Cody, is a junior at Allderdice High School whose preferred pronouns are they/them/their. Murphy no longer plays sports, but they still sees the disparities that exist between female athletes and their male counterparts.

After partaking in a hack-a-thon led by the Women’s Law Project earlier this year, Murphy grew frustrated once again as one of 10 students and advisers who came together in February to dig through data on girls’ sports participation in Allegheny County.

The data — supplied by schools to the Pennsylvania Department of Education [PDE] — are compiled in massive lists that are difficult to sort through and contain many errors, which the PDE said it’s not responsible for catching. To make the information user-friendly, the group created an online tool they’ve entitled Fair:Play.

The Fair:Play data analysis shows girls in the high school level aren’t participating in athletics at the rate they are expected to — a similar percentage of girls participating in sports as there are enrolled in the school. The question then is, Why? Are there fewer opportunities, less attractive options or just no interest?

Murphy wants the questions answered. Once Fair:Play was released in September, they sent an email to the principal at Allderdice alerting him to the problem. Murphy plans to follow up and meet with school leaders about the issue: “There’s gradual progress and we have to be glad there’s progress at all, but it could be so much bigger.” Cody Murphy, 17, plans to follow up about the athletic disparities between boys and girls at Allderdice High School, where Cody is a junior. (Photo by Ryan Loew/PublicSource)

Beyond increasing athletic participation among female students, schools can comply with Title IX by showing a history of expanding programs or by proving they have met the athletic interests of all students.

Anything short of this is unacceptable to Sue Frietsche, senior staff attorney for the Women’s Law Project.

The average disparity in female athletes to female students at Allegheny County schools in 2014-15 was roughly 9 percent, while the statewide gap was about 6.5 percent.

Some schools cite financial restraints and say girls have the opportunity to play on boys teams, though most would agree that environment is less welcoming to girls. Frietsche doesn’t buy the budget excuse. “It is not a matter of resources. You can divide a pie in half, whether it’s a big pie, or a little pie,” she said.

The athletic disparities go beyond the numbers to include fair treatment of girls and equal transportation and facilities. Essentially, whatever the boys are getting, the girls should be getting, too.

Participation levels among female students can be a good starting point to understand if a school is in compliance with the federal law.

In Allegheny County, 19 of the 72 schools that reported calculable participation numbers to the PDE had double-digit disparities between girls participating in athletics and those enrolled in their school.

Of those, Clairton Junior/Senior High School had the highest disparity in Allegheny County high schools in 2015-16, at nearly 24 percent.

Girls attending Clairton have two options for sports: basketball or co-ed track and field. The school invites girls to play on the boys’ football and baseball teams. One girl played on the varsity baseball team in 2015-16.

The school’s public relations coordinator, Alexis Trubiani, pointed to the size of the district, which enrolled 809 students in 2016-17, along with the district’s financial constraints, as reasons for not offering more sports opportunities.

Trubiani also estimates 80 percent of girls enrolled at Clairton High School are busy with jobs after school. “Having a job is a big deal for them,” she said. “It becomes a juggle, and these girls are doing a lot.” For example, in the North Hills School District, the 2015-16 disparity was less than 3 percent in the middle school; it jumped to about 8 percent in the high school.

Amy Scheuneman, director of athletics in the North Hills School District, said the drop in participation is not necessarily due to a lack of offerings. Middle school sports are different. There’s not as much of a time commitment and often there are fewer extracurricular offerings in middle schools. In high school, she said many girls find their niche elsewhere, writing for the newspaper or performing in the musical.

Frietsche sees it differently: High school is when the stakes for athletes become higher because scholarship opportunities open up.

“The more valuable this experience becomes, the more gender inequitable it becomes and that’s heartbreaking,” she said.

In Pittsburgh Public Schools, Perry Traditional Academy in the North Side had the highest percent disparity among the city high schools at nearly 22 percent in 2015-16. Carrick High School had the lowest disparity at just under 7 percent.

“Oftentimes it's those high minority schools that have less resources and then once they divvy up those resources for athletics, the boys get an even larger share of the pie than they do at other schools,” Axelson said.

In the 2015-16 school year, Pittsburgh's Perry High School had the highest disparity (22%) of girls participating in sports versus those enrolled in their school. Perry also has the largest black student population (79%) among Pittsburgh Public high schools.

For LGBTQ students, there is no way to measure how fairly they are being treated, Frietsche said. Athletes are not required to identify their sexual orientation, and the Women’s Law Project would not support such a move, she said. Those inequalities are handled on a case-by-case basis. Frietsche did say, though, that during the course of Title IX litigation, some “really bad homophobia” has been unearthed against coaches and athletes.

Does my school comply?

While college students can find how their school rates on the Equity and Athletic Disclosure Act website, many middle and high school students don’t have that luxury.

However, Act 82 of 2012 requires all public schools in Pennsylvania to report male and female participation numbers to the PDE, along with financial records and historical information.

There are only five states — including Georgia, Kentucky, New Mexico and California — with laws that require such reporting, Axelson said.

Yet Pennsylvania’s records — which are supposed to be on the websites of every school or district, and on the PDE website — are hard to find or sort through.

That’s how the idea for Fair:Play came to be, to put a spotlight on the disparities and make the data easily accessible. The project, funded by the FISA Foundation, is a starting point; it allows people to ask questions, Frietsche said.

Fair:Play tip: Type the school’s name without 'middle' or 'high school' into the search bar for better results.
Check out their tool.

Like, ‘Out of 118 schools listed in Allegheny County, how is it possible that 20 schools failed to report accurate data and another 26 did not provide data at all?’

Casey Smith, acting communications director for the PDE, said the law requires the department to collect and publish the data, but does not require it to analyze for accuracy.

The Pittsburgh district has studied its own Title IX compliance before. A 2010 audit of Pittsburgh Public’s nine high schools found participation disparities and that girls weren’t receiving equal opportunities to practice fields and weight rooms.

Heather Arnet, CEO of the Women and Girls Foundation, pushed for the audit when she was a board member. She had fielded concerns from girls about playing on co-ed teams and not being taken seriously. “Girls were really being put in unsafe situations,” said Arnet, who served on the Pittsburgh Public school board from 2007 to 2009.

The audit caused the district to create a standard equipment list for both male and female athletes; to require principals and athletic managers to create fair schedules; to pay male and female coaches equitably; and to allow girls to have more use of Cupple Stadium, among other initiatives, said district spokeswoman Ebony Pugh.

Yet female participation at Pittsburgh high schools still hasn’t increased by much.

“It’s very depressing,” said Frietsche, noting the district is not alone in this. “What that says to me is that it’s not a lack of information, it’s a lack of will or prioritization.”

District Athletic Director Mike Gavlik said each high school attempts to offer the same sports for boys and girls, outside of football and wrestling, which Gavlik said girls are welcome to participate in.

But increasing participation numbers isn’t as simple as creating a team, he said. Students have to want to participate and meet the 2.0 GPA requirement.

At Perry this year, the school wasn’t able to fill a girls’ or boys’ soccer team, Gavlik said. They tried having a co-ed team and still didn’t have enough players.

“Did we provide the opportunity? Absolutely we did,” he said. Gavlik said he is looking at middle school teams in North Side schools that send students to Perry to see how they can garner interest.

The district is also trying to hire female coaches to lead female sports teams at the district’s high schools.

Gavlik said he sees that as a way to improve participation in the long run: “I think there is a correlation between seeing people that are the same gender as you participating and being in that leadership role, and that equates to having more confidence and wanting to participate in those sports.”

This story was fact-checked by Matt Petras.