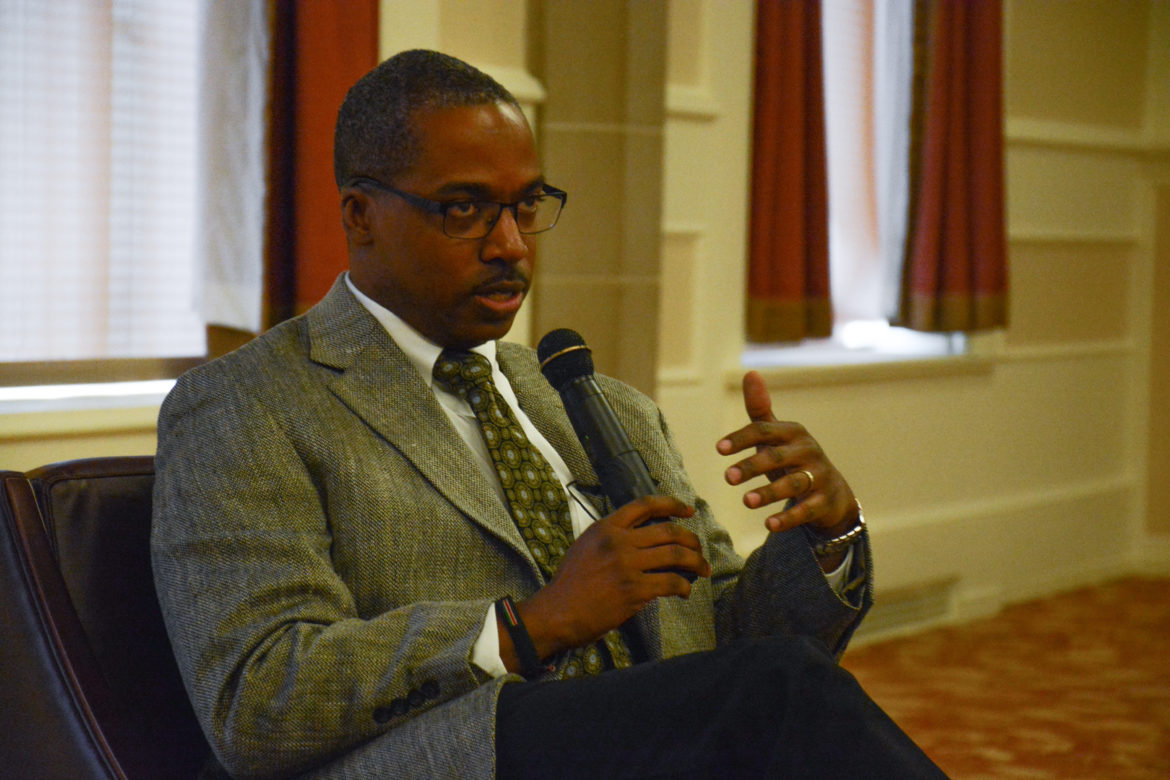 Former US representative to the African Union Reuben Brigety spoke at the University of Pittsburgh's University Club in Oakland Wednesday evening. (Photo by Stephen Caruso/Public Source)

Now, as the retired U.S. ambassador looks at the United States, he’s concerned that the country is at risk of losing its values under President Donald Trump.

“This great experiment we have is not guaranteed to stay forever,” Brigety warned a group of about 25 people during a Wednesday lecture at the University Club in Oakland.

To keep the experiment in democracy and freedom alive, Brigety suggested an agenda of political activism, community engagement and faith in other Americans.

Brigety, who lives in Washington, D.C., represented the United States at the African Union from 2013 to 2015, and has held other positions within the Department of State.

His lecture was one from the the Roscoe J. Robinson Lecture Series, named after the eponymous graduate who was the first black four-star general in the U.S. Army. The talks focus on the intersection of diversity and public service.

Those four values, Brigety said, originate from the African-American community’s struggle against oppression. Each helped pull black Americans through times when the color of the skin meant explicit racism in the form of separate water fountains, racial slurs or midnight visits from men in white hoods.

So as Brigety watched Trump’s campaign unfold over the past year and half — and now follows his first weeks in office — he questions the president’s “commitment” to social justice. In fact, he thinks the president has reversed the course of change.

“The tone of [Trump’s] campaign rhetoric has unleashed ugliness in our country,” Brigety said.

But, Brigety was careful to not project that ugliness onto Trump voters. In fact, he rejects the idea that Trump supporters are racist or that the Russian hacking scandals make the president illegitimate.

Brigety was concerned by the name calling and fierce words exchanged between both Trump supporters and their progressive opponents. He thinks Americans are losing the ability to treat each others’ ideas in good faith, and asked if in the future, “Will we embrace the idea that there are many ways to be Americans?”

In the spirit of Martin Luther King, Jr.’s legacy, Brigety asked fellow concerned citizens to commit to awareness and action.

"Will we embrace the idea that there are many ways to be Americans?"

“We assumed that once the moral arc of the universe is bent in a certain direction, it will stay that way,” Brigety said, adapting King’s quote. “For the arc to stay bent, we must stay woke.”

The former diplomat then took questions from the crowd on various topics — such as America’s shrinking role on the world stage, handling debates on college campuses, and the state of American race relations.

“How do we improve the state of race relations in America?” one person from the audience asked.

Brigety started by offering sympathy to the “white working-class” voters who are fed up with hearing about racism.

However, Brigety thought that there was no natural end point to racism in America, and it could only be halted through “hard conversations” between black and white neighbors across the nation.

“The bad news is that’s got to happen, realistically, a millions times over,” Brigety said. “The good news is that is a place every single one of us has agency.”

Wrapping up the lecture, Brigety called for everyone in the room interested in positive change to offer their time and energy by volunteering with refugees or veterans or hosting protesters in need of a place to rest.

It is through these little actions — “things anybody can do,” Brigety said — that national strength is built.

“That is where the true work in making America great again truly lies.”

Correction: This story previously stated that Brigety is an alumni of the University of Pittsburgh. He is not. The story was updated at 5:30 p.m. Feb. 9, 2017.