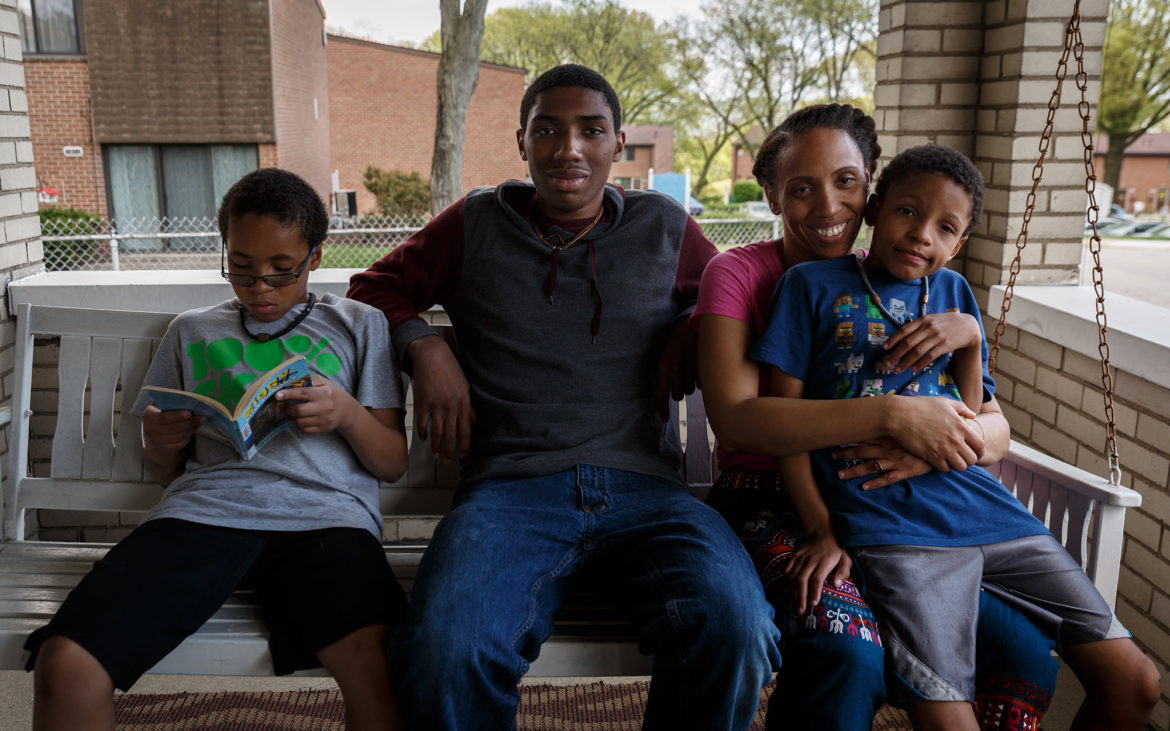 Muffy Mendoza and her three sons — (left to right) Mackell, Jair and Phillip — sit for a portrait on the front porch of their home in Sheridan. (Photo by Maranie R. Staab/PublicSource)

Editor’s Note: As journalists, we spend a lot of time talking with officials and community members and distilling it into stories that explore important issues of our time. But we realize that sometimes it is just more powerful to hear it straight from the source. This is one of those times. The essay is a special feature timed for Mother's Day and the Brown Mamas Monologues* happening May 12.

I don’t like homeschooling my three sons. There, I said it. I’m not a Pinterest mom. I’m not a mom who enjoys crafting and making goo out of borax and food coloring. I didn’t homeschool my three Black sons because I wanted to do it. I decided to do it because I was afraid. I was very afraid.

Like so many other Black moms, I found myself in a perilous situation. I found myself in between the rock of constant calls from the teachers and the thought that my kid might need an IEP (individualized education plan), and the uncomfortable place where you know the adults making the decisions may not have your child’s best interest in mind.

Our nation is seeing a spike in homeschooling among Black families not because Black parents are jumping at the opportunity to spend three to four hours a day teaching their kids, but because Black mothers and fathers are afraid and upset at what is happening to our Black sons and daughters within the walls of America’s education system.

My middle son is extremely intelligent, almost in a scary way. It’s never taken him longer than one hour to grasp any subject or task. At 9 years old, he’s already doing pre-algebra. His writing absolutely sucks, but he can read circles around most fourth graders. From complex books on the idiosyncrasies of computer coding to his favorite book series “Diary of a Minecraft Zombie,” reading is a subject he readily takes for granted as his mind has been allowed the space and luxury of reading whatever and whenever, within the confines of his personal library at home.

For Black children in the American education system, learning is not self-expressive or expressive at all. It is a series of hoops, trials and tests that they pass or fail. 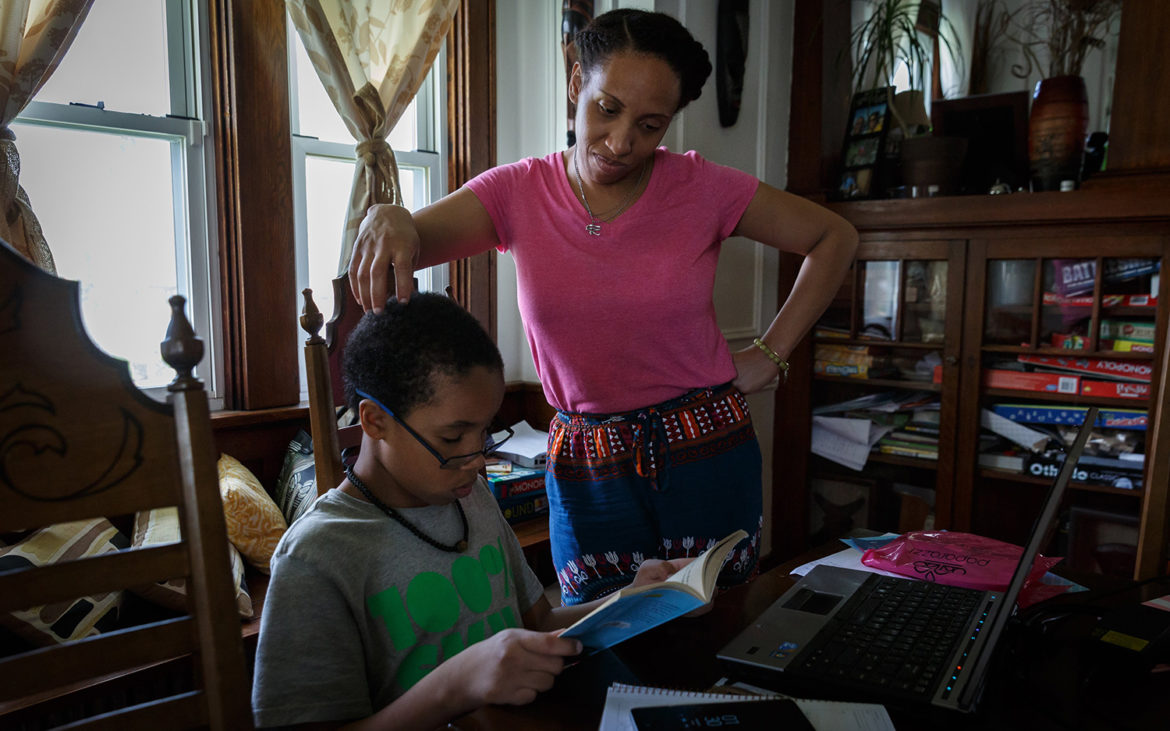 Looking back, my inkling was spot on the first time I visited his first-grade class at a local charter school. I knew something was off. Every worksheet the teacher handed him was completed within minutes. Every time his educator rose to the front of the class, his eyes glazed over and almost like reflex he’d start tapping his foot, playing with paper or squirming his butt in the seat.

And, so were the other kids. I remember sitting at the back of the class with a little copper-toned girl with pink barrettes and highwater khakis. Every time the teacher announced a new subject, she would say in a matter-of-fact voice, “Here’s this part again.” She’d then proceed to give full details as to what was about to happen next. She was labeled a kid with ‘behavior problems.’ 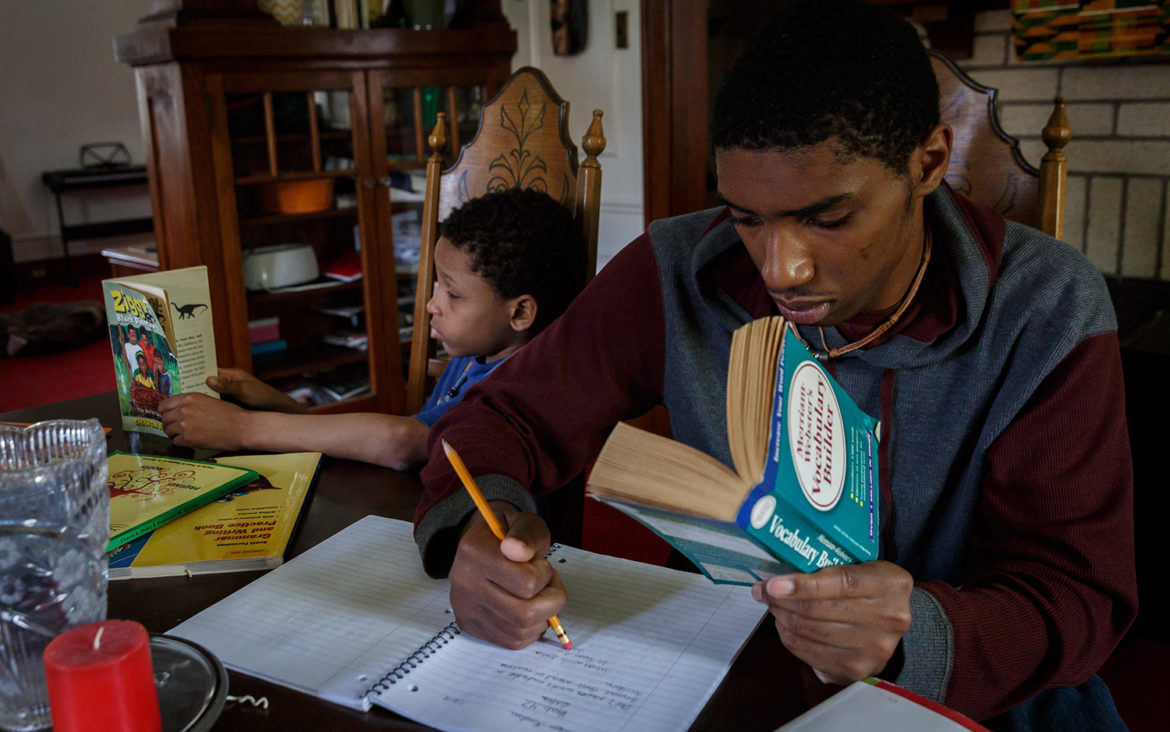 Jair (right) and Phillip Mendoza study at their home in Sheridan on May 9, 2018. Both are homeschooled by their mother, Muffy. (Photo by Maranie R. Staab/PublicSource)

At the time, my ignorance made me believe she deserved her seat at the back of the class. Maybe her announcements were depleting the lessons that would fuel the young leaders of tomorrow.

I remember the first time the thought entered my mind to homeschool my three sons. My boys and I were walking to our neighborhood park about three weeks after my middle son’s first year of school had ended.

I said to him:

“Dada (his nickname), are you excited about going to first grade?”
“No,” he replied.
“Why not?” I said. “You’re going to learn all kinds of awesome new stuff and maybe even make some new friends.”
“Mom,” he said, “no, I’m not. They’re just going to give me the same worksheets with different numbers on them.”

It’s as if Americans have not yet figured out a better way to educate our children than to give them the opportunity to do exactly what we tell them on 8x11-inch copy paper.

His words stayed with me and will stay with me until the day worksheets are banished from the American learning system. During my time as a room parent for my son’s first-grade class, I saw more worksheets pass through those children’s hands than I’d like to admit.

The longer I was in that classroom, I realized that school for Black children in America is better equated to transitional holding cells for small people who have not yet come of prison age than it is to actual learning centers.

No recess, silent lunches and yelling (a lot of yelling) are some of the daily activities that my sons told me about (and that I experienced) in their school.

Reality is that Black children don’t get an education in school. They get what I like to call a do-cation. Rather than evolving into the human beings they are divinely meant to be by exercising their birthrights of the skills, talents, intelligence and dreams they innately possess, they are told to do. Do worksheets. Do sports. Do (you fill in the blank).

For Black children in the American education system, learning is not self-expressive or expressive at all. It is a series of hoops, trials and tests that they pass or fail. If they pass, they are given their do-ploma to be able to go on to the next step of doing, not creating or determining. Their do-ploma gives them the opportunity to do more in corporate, nonprofit or judicial America.

Hence perpetuating the system that continues to churn out Black doers, instead of Black beings.

Our nation is seeing a spike in homeschooling among Black families ... because Black mothers and fathers are afraid and upset at what is happening to our Black sons and daughters within the walls of America’s education system. 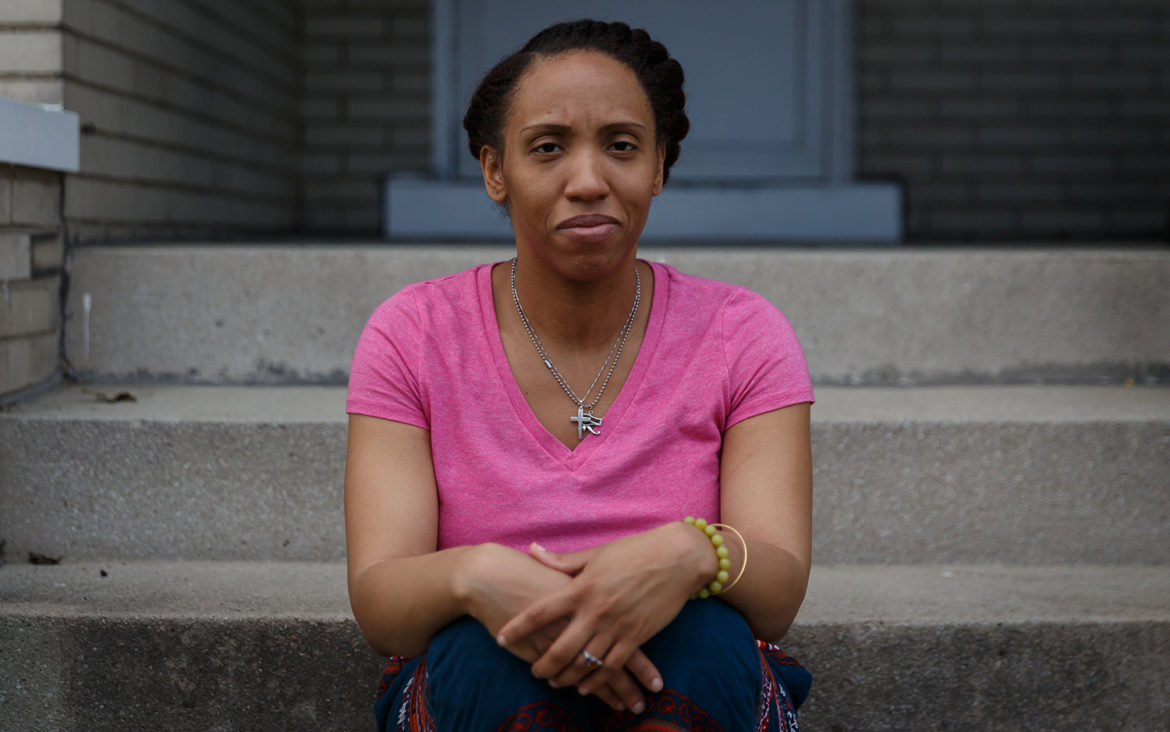 Muffy Mendoza says she didn't want to homeschool her three sons, but felt she had to because she believes America's education system is not suited for black children. (Photo by Maranie R. Staab/PublicSource)

A being has original thoughts that do not stem from doing the bidding of others. A being becomes responsible for their thoughts and, out of that sense of obligation to fulfill their intellectual prowess, creates. A Black being would go on to create families, then communities, then economic, education and social constructs that support community.

That’s not what’s happening in school for Black children. In school, Black children lose the ability to believe in their own intellect and dreams as they are lulled to sleep with the constant demand to do.

In school, Black children are not taught about the issues facing their communities and given confidence in their ability to solve their own problems. Their problems are issues that would cease to exist if just one generation was allowed to think outside of the box about real solutions for poverty, fatherlessness or blight — instead of being given a worksheet about Johnny losing his dog.

For me, I drew the line at the worksheets, my son’s squirming and the little girl who sat at the back of the classroom patiently waiting for the inevitable time when my son would join her as a companion. That year, I pulled my sons out of school.

No, I’m not a teacher. I struggled to teach my kindergartner how to read when I pulled him out of school. I struggle every day with the tug of wanting to fulfill my own intellectual dreams and the necessity of teaching my children to solve the problems my family, my community, my race has been dealing with for the last 400 years (or more).

Homeschooling was not a part of the American dream I thought I would have access to after graduating college. Like I said, I’m not that kind of mom.

Muffy Mendoza is the founder of Brown Mamas, a movement that champions Black mothers to be the gamechangers our communities need. She is also the founder of the upcoming Brown Mama Monologues. She can be reached at brownmamas.com.

7 thoughts on “For us, homeschooling is the only option because of America’s incompetency in educating Black children”