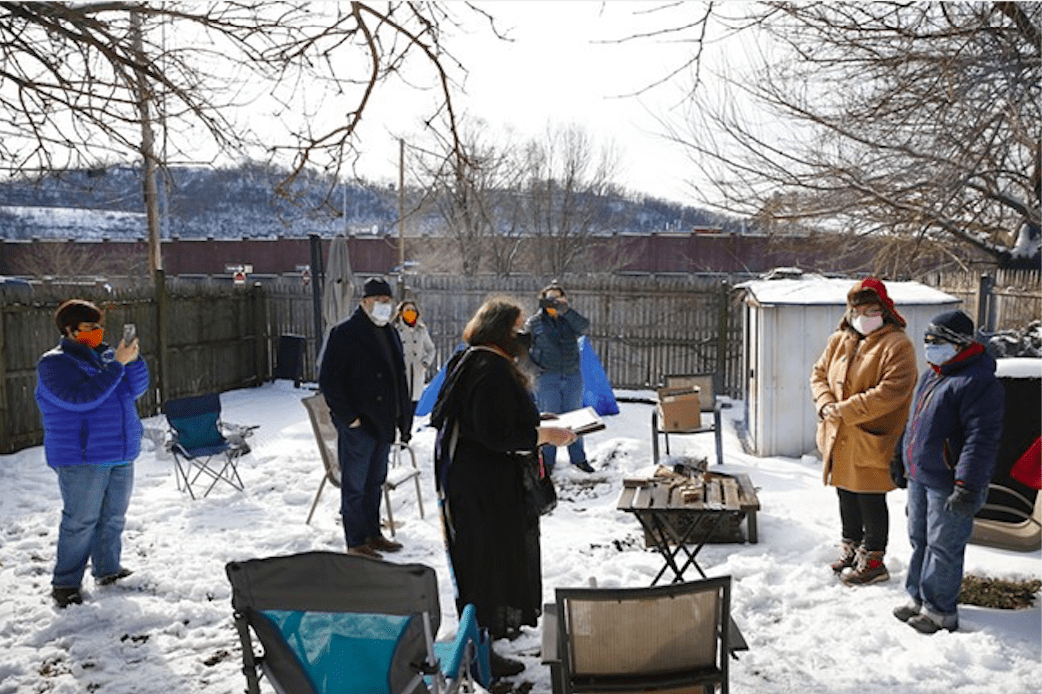 After all these years, encountering homophobia in my everyday life, from friends, neighbors and family, still takes my breath away. Each day is filled with microaggressions in spite of my privilege as a white, cisgender, middle-class woman, but those typically originate with strangers or systems.

When the source is someone who knows me, it hits hard.

In the beginning of 2021, my partner of nearly 18 years and I decided to marry. Quickly. Our delays had stemmed from individual matters we had to resolve, but once resolved — the anxiety of the pandemic pushed us to take that step. So on Groundhog Day, we stood in our backyard, shivering in the snow while we quickly exchanged vows. Our guests were limited to the officiants, the two friends who tended the fire pit while also photographing and video recording, and our neighbor.

In less than 40 minutes, we set up, had a ceremony, served wedding cupcakes and mulled apple cider for our guests, cleaned up and went inside to tell the world.

It was magical, weird and wonderful.

Several friends sent good wishes right away with a card or a gift from our registry, or a simple note. I was shocked when only two members of our extended families followed suit — Laura's mom and my brother. Months later, there has been nothing more than a handful of Facebook likes on our wedding photos.

Was it the pandemic? Were folx angry because they weren't invited? Were they waiting for a post-nuptial reception in 2022? Had Facebook likes replaced wedding registries, bridal dances, cookie tables and the art of note writing?

A friend suggested we send a physical announcement via the postal service, so we did. I was heartened just last week when I received a lovely acknowledgement from my aunt/godmother and her two adult children. But no one else responded.

It's one example of the numerous but very different types of aggressions and discrimination LGBTQ Pennsylvanians face. Some of those issues deal with personally navigating relationships in the world, while others are more institutional.

In 2002, the Pennsylvania Supreme Court ruled that same-sex parents were legally able to apply for second-parent adoption, which grants the "second" parent identical rights as the "first" parent (who is either a biological or adoptive parent) without any loss of rights for the first parent. Prior to that, same-sex couples did not necessarily have legal rights to parent their children. Nearly 20 years later, the Pennsylvania Legislature has yet to codify parental rights for same-sex couples, forcing them to go to the extra expense and time to adopt their own children. Even worse, some couples do not realize that marriage does not automatically give them parental rights and fail to pursue this legal protection. They likely assume, as would an opposite-sex couple, that marriage or a birth certificate are sufficient.

In 2014, a federal judge overturned Pennsylvania’s legislation ban on same-sex marriage. When then-Governor Corbett declined to challenge, marriage equality became the law of the commonwealth. Except it has never been codified, meaning a Pennsylvania General Assembly has not offered us the protection of the law.

The same is true of non-discrimination protection and hate crimes protections. There are administrative work-arounds relying again on court decisions to include sexual orientation and gender identity under the legally protected class of sex. At least 69 Pennsylvania municipalities have local protections against discrimination, protecting about one-third of Commonwealth residents; fewer than 10 are in Western Pennsylvania.

Our state government is not inclined to create a safe, more equitable community for LGBTQ residents and our families. This forces us to rely on a hodgepodge of court decisions and administrative policies cobbled together but lacking the permanency of legislation.

It is clear that LGBTQ residents of Pennsylvania continue to be second-class residents. Our privileges, especially racial privilege, often creates a hierarchy of “acceptable gay identities” that can divide our community internally as we struggle to understand oppression from an intersectional perspective.

And that has an impact that trickles down to our everyday interpersonal lives. The horrific attacks on Dr. Rachel Levine, former health secretary of Pennsylvania, over the past year were probably unpleasant and frustrating to her, especially when they interfered with her ability to do her job. But for the everyday trans person who isn’t a doctor, doesn’t have the same security as a public official and is not white?

“After all these years, encountering homophobia in my everyday life, from friends, neighbors and family, still takes my breath away.”

When we launched the Pittsburgh MasQUe ProjecT at the beginning of the pandemic, our goal was to ensure trans and queer folks had access to face masks. This grew out of our shared experiences as trans and queer community leaders with the nuances of discrimination in health care. We knew from the very beginning that the potential for discrimination and misgendering was very high based on our everyday lived experiences. I was appalled that when I sought media coverage, I was repeatedly asked by journalists for transgender victims of mask discrimination. They did not believe me; they did not acknowledge that we were trying to get ahead of possible discrimination. They did not factor in the abuse of Dr. Levine or the decision of parents and students in the Boyertown Area School District to challenge a trans-affirming policy all the way to the Supreme Court. They didn’t want the story, they wanted a victim.

It seems like some things have changed for the better, but it really depends on how people treat each other and whether the legal protections are on solid ground.

The pandemic explains the topsy turvy traditions at our wedding, but it can't explain away the silence from first cousins and their adult children, scores of parental cousins, classmates, coworkers and the neighbors who watched me grow up. Factor in similar numbers from my wife's side. Is it possible the pandemic silenced them all?

No, it is not. It is homophobia, the polite “don’t ask, don’t tell” version most of us are familiar with by now.

We are adults, well launched with stuff and things. We aren't worried about our housing or employment being jeopardized. We recognize our privilege to examine this manifestation of homophobia.

Their silence threatens to erase our marriage, reminding me that we are always tolerated but rarely celebrated. I can bring my white lawyer partner in her L.L. Bean aesthetic and her 20-plus-year career to family functions. But it's increasingly clear that I cannot bring my wife.

These are small fires fueled by ignorance but also by the quiet tolerance our families have shown. As long as we are the right kind of gay versus the wrong kind of queer, we can participate. Just not fully or equally.

Sue Kerr, MSW, and her wife, Laura Dunhoff, were married by co-officiants Reverend Anne E Lynch and Mayor Bill Peduto on Feb. 2, 2021. You can find their love story (and registry) here.