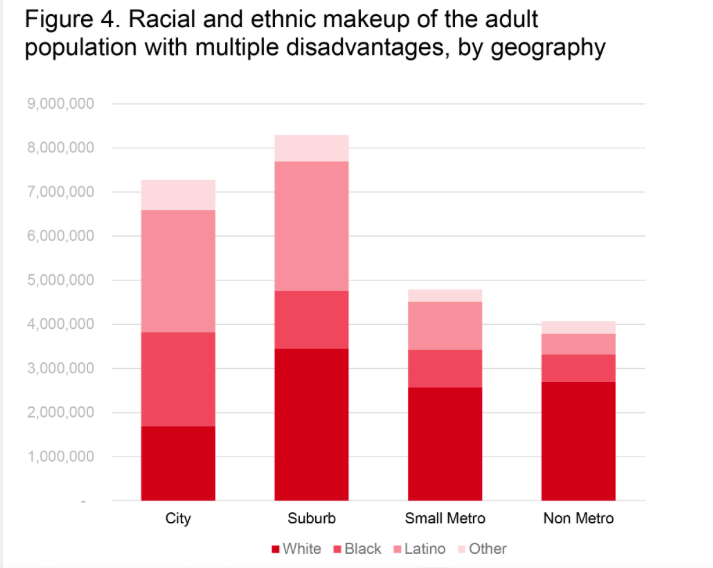 In American suburbs, earning a low income is not the only symptom of poverty. Of the 8.3 million adults in suburban poverty, there was almost always one other impoverishing factor — most commonly, a lack of health insurance, according to research from the Metropolitan Policy Program and the Center on Children and Families at the Brookings Institute.

Suburban poverty can also stem from a lack of education, living in a depressed area or the adults in the family losing their jobs.

In cities, the study found, residents who are impoverished most often either only exhibit one of those characteristics or almost all of them. Suburban poverty falls somewhere in between.

The study looked at adults from 25 to 61 using the American Community Survey Data from 2014 and found that almost half of the population suffers from at least one of the factors. Almost a quarter of the population is plagued by two. Comparatively, only 2 percent of adults in the survey dealt with four or more of the “evils of poverty.”

In small metro and rural areas, residents were most likely to deal with unemployment. In cities, people who were experiencing poverty were more likely to be surrounded by others in poverty.

In February, PublicSource reported that while people living in Pittsburgh suburbs often had houses and jobs, some still struggled to feed and clothe their children, pay bills or afford transportation. For example, at least 20 percent of South Hills families are impacted by suburban poverty, according to the South Hills Interfaith Ministry [SHIM], a social services organization that provides food, clothing, utilities and other support.

SHIM blames the struggle on the lasting side effects of the Great Recession and the housing market decline.

“One of the challenges [of suburban poverty] is that neighborhoods still look good,” Mary  Phan-Gruber, executive director of the Jefferson Regional Foundation, told PublicSource. “It is hidden. You don’t see it. You have to look around and put the pieces together.”

According to the Brookings report, white populations make up 41 percent of disadvantaged people in suburbs, 54 percent in small metro areas and nearly 75 percent in rural areas.

These statistics are reversed for disadvantaged minority populations, which are most prevalent in cities.

In major metropolitan areas, the rate of blacks struggling from at least two poverty factors reaches as high as 45 percent. For Hispanics, the numbers reach 58 percent.

Among factors contributing to poverty, such as young adults without a high school diploma, racial gaps in health insurance coverage and joblessness, Hispanic populations always measured as the most disadvantaged population.

For example, from 1993 to 2013, the rate of Hispanics without health insurance coverage averaged between 40 percent and 50 percent. For blacks, that range was 25 to 35 percent, and for whites, it was 10 to 20 percent.

Factors such as lacking a higher education can make it harder for people to secure a competitive job, and from there, spiral into a bevy of problems impossible to get out of, according to the report. The report states: “For too many, finding a way out of poverty means confronting more than one of these barriers at the same time.”