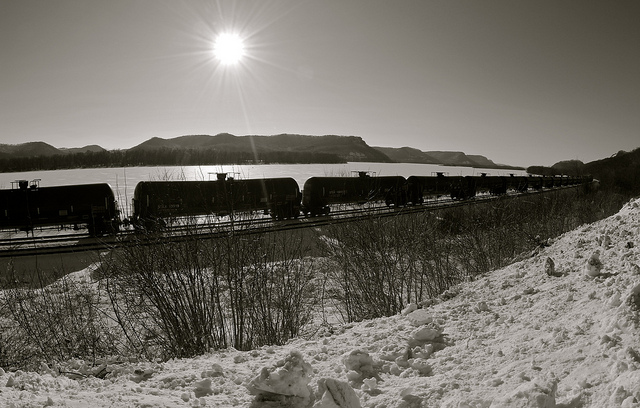 As more trains carry crude oil and ethanol, more trains are derailing and going up in flames, a trend that sparked U.S. federal safety officials on Monday to call for an urgent makeover of the country's fleet of tank cars.

“The longer we wait, the more we expose the public to the problems of these cars that aren’t especially robust,” said Christopher Hart, the National Transportation Safety Board chairman, to The Associated Press.

The National Transportation Safety Board issued a series of recommendations calling for tank cars to be fitted with protective systems better able to withstand fire than the bare steel construction now widely in use. It said a decade-long retrofit timeline that has been suggested by the tank car industry was too long to wait.

One alternative cited by the safety board would equip flammable liquids cars with ceramic “thermal blankets” that surround the tank and shield it from intense heat should a nearby car catch fire. Those blankets already are used for transporting liquefied petroleum gas. Also recommended were relief valves that can prevent pressure from building inside tank cars as they heat up from nearby fires.

Cars built to a tougher standard under rules voluntarily adopted by the railroad industry in 2011 have burst open in at least four derailments since the beginning of the year. The Department of Transportation is currently looking at rules to improve tank car safety. But if tank cars take too long to retrofit, the NTSB recommends that federal regulators consider requiring trains to travel at significantly lower speeds.

More from the AP:

The Association of American Railroads said in response to Monday’s NTSB announcement that it supports aggressive steps to retrofit or replace the tank car fleet. “Every tank car moving crude oil today should be phased out or built to a higher standard,” the group said in a statement.

Tom Simpson, president of the Railway Supply Institute, which represents tank car users and manufacturers, said companies already have spent more than $7 billion to build tens of thousands of tank cars under the voluntary standard. Mr. Simpson said those companies are ready to do more, but it will take time.

A boom in fracked oil in places including North Dakota and Montana has pushed an unprecedented amount of crude oil onto the tracks in recent years. Last year, railroads moved about 490,000 tank cars of crude oil, compared to just 9,500 in 2008.