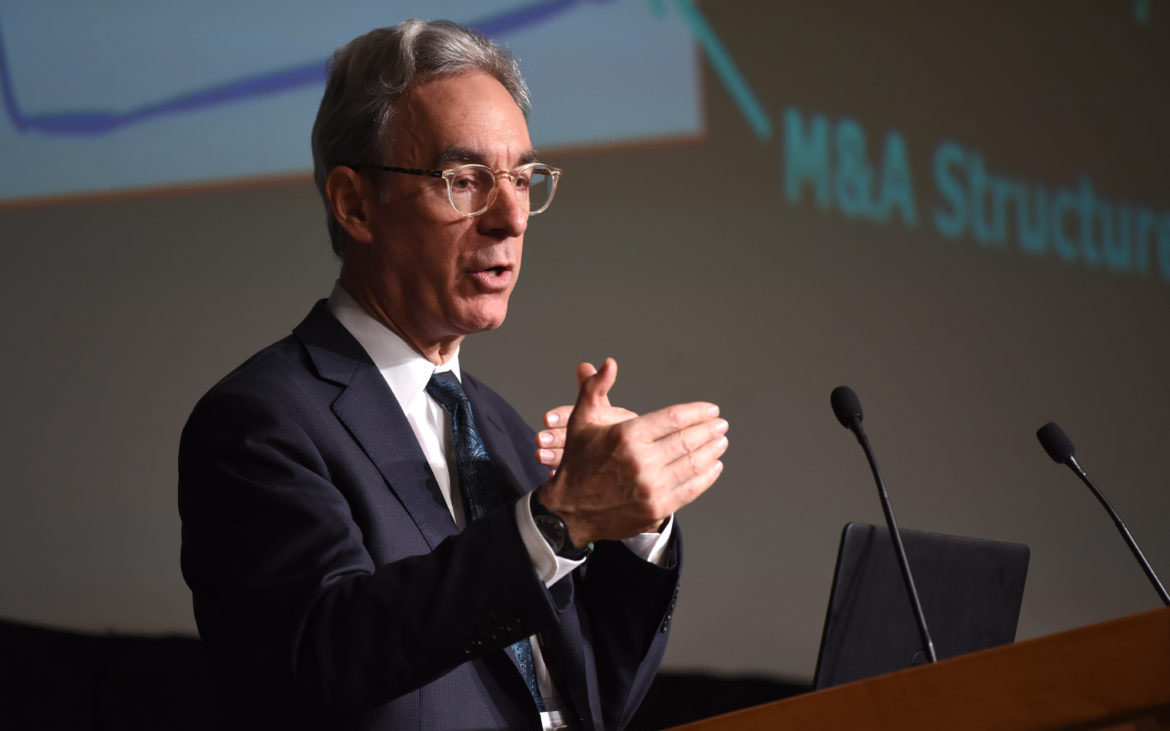 Don Anderson, the chief sustainability officer at Blackstone, told a crowd during Carnegie Mellon's Energy Week to avoid using environmental words and instead use a business vocabulary when convincing companies to improve their energy efficiency. (Photo courtesy of Carnegie Mellon University/April 4, 2018)

That was the message to businesses, engineers and environmentalists alike from Don Anderson, the chief sustainability officer for the private equity group at Blackstone last week at Carnegie Mellon University’s Energy Week.

Blackstone runs the largest private equity fund in the world with a portfolio that includes more than 80 companies and 500,000 employees. And so they are in a position, he said, to know what actually works rather than what has become trendy in environmental circles. He routinely works with large companies, he said, and finds tens of millions of dollars in savings, which also can have a big impact on the environment.

But the best way to achieve these environmental returns, he said, is to stop talking about it. Be ruthless about earning money from energy efficiency, and the environmental benefits will follow; good intentions and wanting to appear sustainable are getting in the way of getting results, he said.

That’s, in part, because environmental terminology is often confusing to business leaders. They’re used to hearing terms like “efficiency” and “cost reduction” and not “carbon footprint” and “environmental footprint.” And worse, this outside focus distracts them from running their hotels, power plants and hospitals.

"I have never heard ‘carbon' or 'the price of carbon' mentioned by any of my Blackstone colleagues in 7 years,” he said.

When Anderson met his boss, he said, the first thing his boss told him was that he didn’t like the word “sustainability” in Anderson’s title because it’s confusing. But after six years of earning the company money, Anderson said he was elected partner in December, the first sustainability officer in the industry to be elevated to that status, he said. 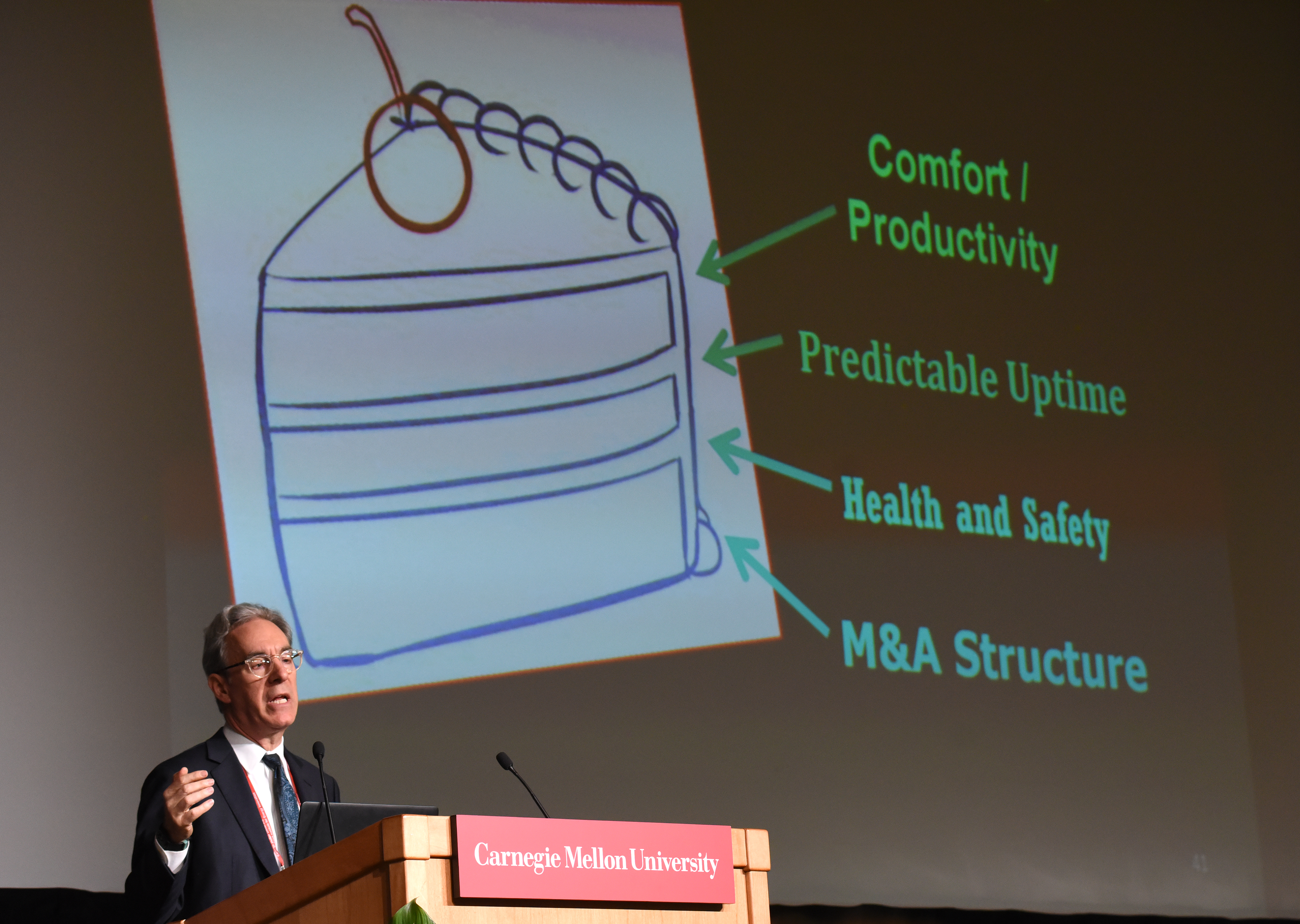 How to make money being greener

Companies with the most sophisticated clean technology in their buildings don’t actually run more environmentally efficient buildings, Anderson learned from a 1999 study.

That’s because sometimes the people in charge of maintaining their buildings didn’t know how to use the green technology. Or they were spending a lot of money on expensive technologies when they could have had more impact with cheaper solutions.

For example, he said, a hospital network once tried to show off its LEED certified building, often touted by building owners as a stamp of environmental approval. But when Anderson looked at the data, it was one of the most wasteful hospitals in the country.

So, he usually recommends that companies get rid of their “green teams” and chief sustainability officers because they don’t have any power to make changes.

So what does he think works? He looks for no-cost or low-cost solutions.

So why aren’t companies doing these things now, if it’s so simple? His answer is a truism of management consultancy: They’re not measuring the performance of their staffs and are not providing incentives to get better.

One of the limitations of Anderson’s approach is that typically he has only three years with a company before Blackstone sells it. He has to make efficiency changes that will make the company money. Now.

One limitation of that approach was illustrated by David Danielson, the managing director for Breakthrough Energy Ventures [BEV], a new $1 billion Bill Gates-led investment fund. He told the Carnegie Mellon audience that incremental changes aren’t enough.

There are already a lot of promising technologies like solar and wind energy and electric cars. But even if all of those technologies are adopted all across the world — a big if — that still would only eliminate about half of the world’s projected emissions, he said.

To get all the way down to the emissions level needed to avert some of the worst effects of climate change, he said, the world needs a lot of new technologies that don’t exist yet.

And that means a lot more money must be put into research and development. Gates recruited 20 of the world’s richest people, with a total net worth of around $500 billion, to start BEV.

Instead of looking for instant returns, the BEV fund looks to invest its $1 billion with a 20-year time horizon. 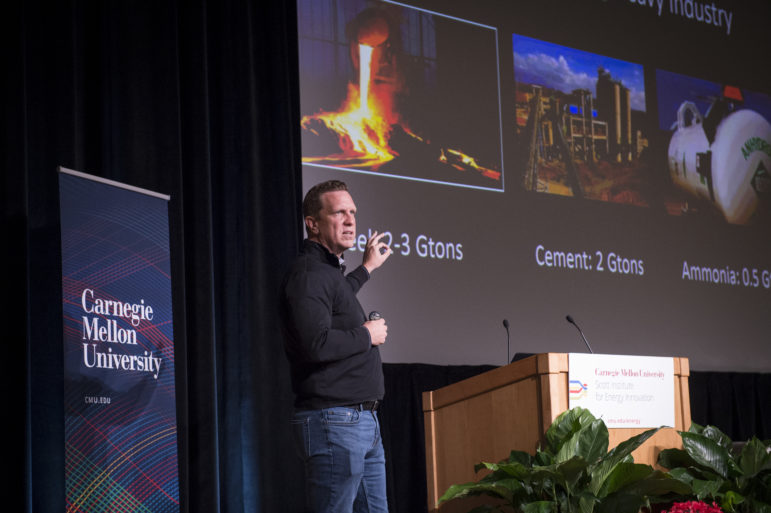 The problem is so big, Danielson said, his fund is only looking to invest in solutions that could have a huge impact on greenhouse gas emissions: half-a-gigaton at minimum. That’s about 1 percent of the world’s current emissions, the equivalent of replacing a third of the gasoline consumption in the United States. Or half of the world’s total wind energy.

Or, in financial terms, it’s the equivalent of creating 100 new companies the size of Exxon, with an $80 billion value.

So, rather than investing in a particular sector, BEV is looking to invest in areas with potential to reduce emissions, such as:

They plan on investing in these companies over the long term, so that they can both fund promising ideas and help companies ramp up production until they can become profitable on their own.

But Danielson said he realizes that, although $1 billion seems significant, it pales in comparison to the around $185 billion in yearly revenue from oil and gas company BP alone.

4 thoughts on “Energy investors to Pittsburgh: If you want to save the environment—think about how to make money”