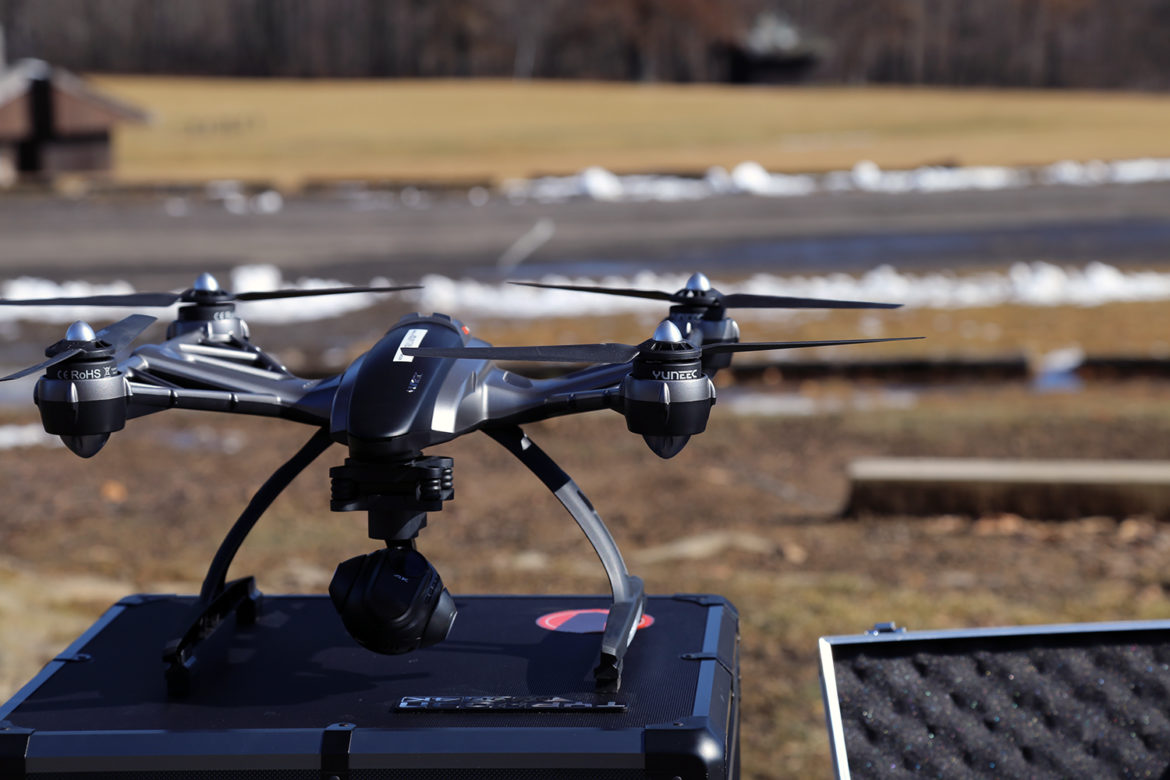 Manning the controls, preparing for launch, sending a small aircraft buzzing around the backyard — it all seemed like 21st century fun and games just a few years ago.

The game has changed since the popularity of privately-owned unmanned aerial vehicles (UAVs) has skyrocketed. UAVs, commonly known as drones, are a booming industry in 2016.

The drone phenomenon started as a hobby, and still is for about 358,000 recreational flyers who had registered with the Federal Aviation Administration (FAA) as of mid-February.

But about 3,800 businesses (as of March 4) and 74 public service agencies nationwide have joined the squabble for airspace. In Pennsylvania, more than 90 businesses are authorized to use drones for profit.

The number of people — most of them inexperienced pilots — taking to the sky has pushed the FAA to regulate drone use. But the agency has yet to make a plan that addresses safety and privacy concerns and gives drone owners a clear path to legal flying, revealing how difficult it is for regulators to keep up with the pace of technology.

That means that if you want to transition from flying drones as a hobby to flying for business or security purposes, the process isn’t easy to navigate.

The FAA’s most definitive action came in 2012 when it called for a plan that would, by 2015, integrate unmanned aircraft into the nation’s airspace. The Federal Aviation Administration’s mission is to make sure drone pilots understand the risks of sharing airspace with large aircraft. (Photo by Elizabeth Lepro/PublicSource)

The agency has missed its deadline for releasing the final rules on small unmanned aircraft, leaving many drone owners’ plans uncertain.

Liz Woolery, a policy analyst at the Open Technology Institute, blames the delays on the way 21st century innovations are changing how we think about privacy.

“There are these concerns that the proliferation of drones and drone operations [is] going to pose threats to privacy that we really haven’t seen before,” Woolery said.

How does the government react when what the individual perceives as a right to flight intersects with public safety?

“It’s kind of a question of how the law responds to technology and how we move forward with that,” Woolery said. ‘This is really a question of balance, balancing different rights.”

Confusion in the air

Micah Rosa, the head of drone enthusiast group Drone Masters Pittsburgh, invited Kasznica to explain Section 333 of the FAA’s Modernization and Reform Act of 2012, which created an exemption to the federal ban on the commercial use of unauthorized aircraft.

As of Feb. 5, 2016, 92 companies located or operating in Pennsylvania have been granted a commercial exemption to fly drones by the Federal Aviation Administration. PublicSource has provided the location of each company by zip code, the make and model of the drone(s) and a description of how the drones are being used.

Since last year, a smattering of industries — from real estate, to film, to mapping and surveying — have flooded the agency with Section 333 requests for their drones.

“How many people want to fly, making some money, but are on the ground waiting?” Rosa asked. About 15 hands shot up and the room began buzzing with questions.

“How much will all this cost me?” “It’s not legal to fly a drone in my own backyard?” “Can I fly at night?”

Christine Iksic, who works for Precision Laser & Instrument, Inc. — a company that sells drones and other mapping and survey equipment — said drones are “hitting the mainstream and the professional market at the same time.” The existing rules don’t cover the range of uses.

Public service agencies, like law enforcement and emergency services, are in a gray area. They require a Certificate of Waiver or Authorization (COA) to fly drones.

In July 2015, Beaver County Emergency Services test drove a UAV, scanning 5 miles of the Ohio River and an inaccessible dam in search of a missing person.

“That was what really made us go out and purchase it,” said Wesley Hill, the Beaver County emergency management coordinator. “...it covers so much area so much quicker than what you would be able to do by ground.”

“The process is changing daily. I can’t keep up with it,” Hill said. “You have to protect people’s rights for this, that and the other, [but] there’s not one avenue for emergency response that I can’t see it [being beneficial].”

He and his friend Kendall Early first bought a bat-like Hubsan flyer on Amazon, mostly to careen it through the halls of their homes. But they’ve since upgraded. Suttelle and Early now own four high-tech drones, and, in November 2015, they submitted the Section 333 paperwork to pursue a startup aerial photography and mapping business, Innovative Aerial Solutions. Their request got on the FAA’s docket on Feb. 1.

The average waiting period for Pennsylvania businesses is about four months.

Anyone who wants to fly a drone commercially also must have either a professional, recreational or sport pilot’s license. Suttelle’s relative with a pilot’s license will fly the drone for Innovative Aerial Solutions.

Zack Gowdy, a specialist at Gowdy Brothers Aerospace, a Minnesota-based firm that helps people navigate the process, said this is a common practice.

“[It’s] basically like [having] your driver’s license and a car, but you need both to drive,” Gowdy said. “A lot of the clients that we’ve filed for...they contract it out.”

Compared to remote-controlled helicopters, Gowdy said drones are easier to buy and fly, so people with less experience are moving into the air more quickly.

“It takes a lot of skill to fly RC copters,” Gowdy said. “Drones, it’s simple. That being said, anyone can buy one...people are unaware of what they’ve got.”

Joshua Brown, a Navy veteran and founder of Icarus Aerospace, said because they’re uninformed, hobbyist flyers shouldn’t have been allowed in the professional realm.

“Most people have these little white quadcopters, and they think that’s the be- all, end-all,” Brown said. “They’re really playing with models...they’re dangerous...they fall apart. They’re toys.”

How to register your drone

“Registration is all about safety,” FAA spokesperson Jim Peters said.  “It provides us with a key opportunity to educate the new generation of airspace users that, as soon as they start flying outside, they’re pilots.”

This spring, more substantial rules — based on the FAA’s proposed framework of regulations — might eliminate the need for a pilot’s license for drones.

Changes like these would make drone-based startups cheaper and easier for people with UAVs like the popular DJI Phantom 3. Made with plastic parts and just under 3 pounds, with a flight time of about 23 minutes — a passing fetish, not a business model, according to Brown.

“This is the dot com boom of this century,” Brown said. “There’s a lot of people, that when the dust clears, they’re going to be out of business.”

Early and Suttelle set up their equipment in the gravel lot of Bush Creek Park in Beaver County, out to take advantage of a lukewarm day in February.

Suttelle consults a printout of pre-flight safety checks: Check the area for obstructions, contact the nearest airport, keep an eye on passersby. But not every drone owner is so careful.

The FAA documents all reported drone sightings, like the UAV seen flying over Pittsburgh’s PNC Park this summer or spotted on the ledge of the Empire State Building.

The agency released a list of more than 750 “close calls” from November 2014 to August 2015. Most of those reports were from pilots; four came from Pittsburgh.

Although the Allegheny County Airport Authority recorded only one sighting since it started reporting in December, concern over drone interference spurred the creation of a working group on unmanned aerial systems [UAS].

The group, which meets twice a month, intends to release a set of guidelines for UAS.

“It’s a national issue that keeps getting bigger,” said Bob Kerlik, an airport spokesman. “[The] biggest thing for us is that we want to do everything we can to educate the public that they should not be flying drones near airports.”

In Washington, D.C., the National Telecommunications and Information Administration is holding regular gatherings of policy and privacy experts, like Woolery, corporations and members of the press to determine best practices applicable to a multitude of drone users.

Part of the discussion is how more technology might curtail drone danger. The Airline Pilot’s Association has called for required updates that would allow drones to automatically avoid other objects.

Drone technology has created some new-age problems, she continued, but “technology will become so good that some of these problems that we’re discussing will be saved by technology.”