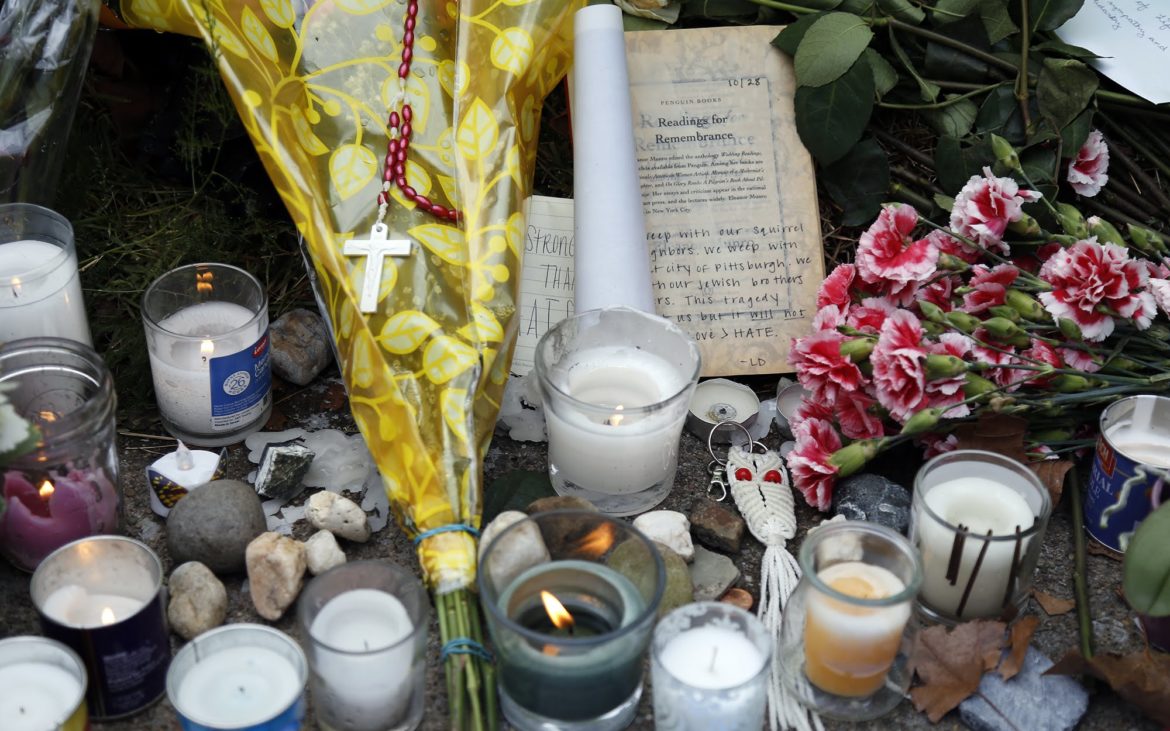 Notes, flowers and candles are left at a memorial at the intersection of Murray and Wilkins avenues in Squirrel Hill. (Photo by Ryan Loew/PublicSource)

Within hours of Saturday morning’s massacre at the Tree of Life synagogue, fundraisers to help families of victims started popping up online.

Some originated in Pittsburgh and others as far away as New Jersey, Maryland, Texas and California.

As Pittsburgh grapples with the aftermath of the deadliest attack on the Jewish community in U.S. history, how can potential donors separate legitimate fundraisers from scams?

If you plan to give, it’s important to know that your money is actually helping those in need. For example, as PublicSource was reviewing multiple GoFundMe pages Monday morning, four of them appeared to have been taken down by the afternoon.

We looked into those that are still active. Here’s what you need to know:

This GoFundMe campaign is the largest of the online fundraisers so far. It is organized by Shay Khatiri, an Iranian immigrant who has studied and worked in the United States for the last few years. The campaign raised nearly $750,000 as of 8 p.m. Monday. In several updates posted on GoFundMe, Khatiri assured donors that the funds were set up to be directly routed through PayPal to the Tree of Life Congregation and that he would not have access to any of the money. GoFundMe also verified the campaign, according to its website. PublicSource reached out to Khatiri for additional information but did not receive a response back. 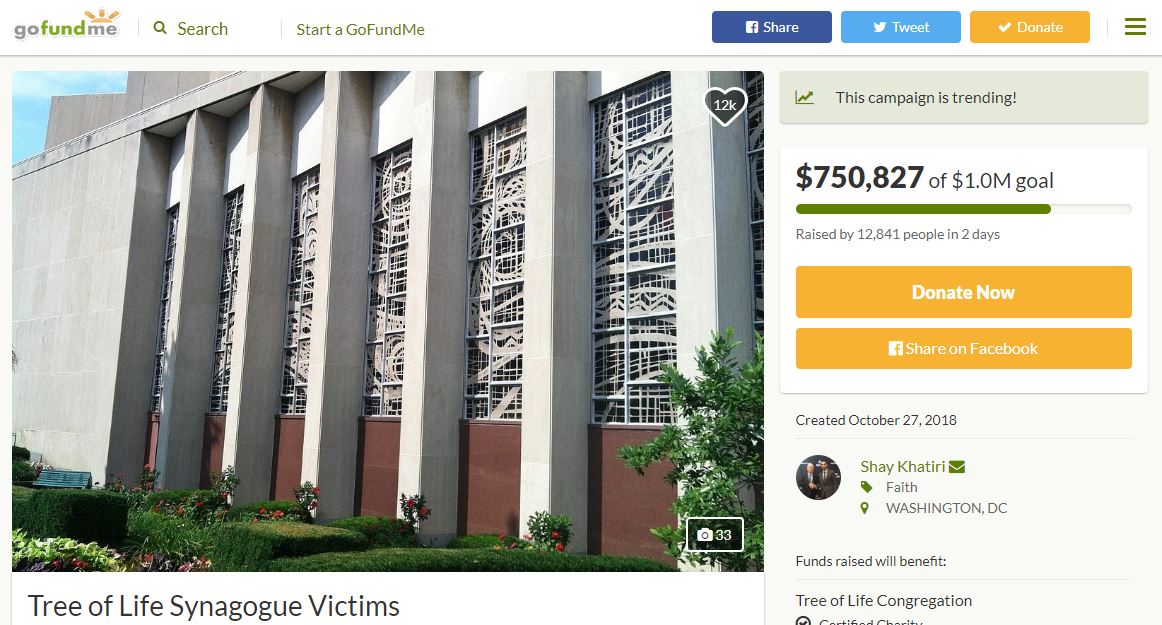 The largest fundraiser connected to the shooting at Tree of Life. GoFundMe verified this campaign, which has raised hundreds of thousands of dollars.

Launched on the Muslim-focused LaunchGood platform, this fundraiser was organized in part by Tarek El-Messidi and Subhan Vahora. The pair works for CelebrateMercy, a Cincinnati-based nonprofit organization that seeks to educate and dispel stereotypes about Islam. By the end of Monday, the campaign had raised more than $156,000. Vahora does not live in Pittsburgh but said the money will go to the Islamic Center of Pittsburgh, which would then coordinate with local Jewish groups to distribute the money.

In an interview on Monday, Vahora said he and El-Messidi were moved to help after they saw news of the shooting on Saturday. El-Messidi reached out to LaunchGood and the Islamic Center of Pittsburgh to coordinate raising funds, and set an initial goal of $25,000. They passed that goal in six hours and kept raising the bar, first $50,000, then $75,000 then $100,000.

“We, as humanity, need to stick together,” he said. “That’s ultimately the focus: How can we get people together to respond to hate with love?”

Wasi Mohamed, the executive director of the Islamic Center of Pittsburgh, said his congregation is working with CelebrateMercy as well as Emgage USA, a Muslim outreach organization, to raise funds. Mohamed said his goal is to have all the money in the hands of the families by the end of the week.

“Money isn’t going to fix this. It’s just going to help them focus on mourning and grieving a little more,” he added. 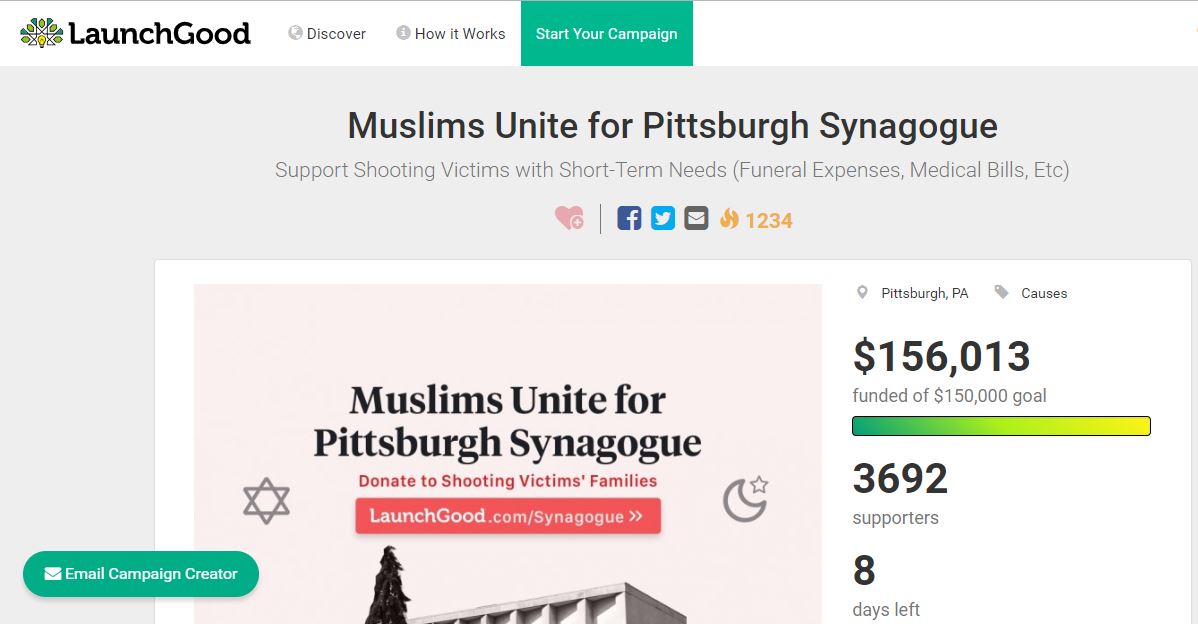 Support for Tree of Life Synagogue

When Monica Edelman woke up in California on Saturday, she checked her phone as many other 27-year-olds do and saw the news about the shooting. As a Jewish woman who works in the Jewish nonprofit world, she was heartbroken. She first looked for ways to donate to Tree of Life directly but the only options she found were to send a check, try to log in through a member portal or use an Amazon fundraiser. (Note: Tree of Life later added a link to donate to the synagogue directly via PayPal). When Edelman couldn’t find alternatives, she started a Facebook fundraiser herself, which raised $80,000.

For the 2,300 people who ultimately donated, Edelman said their money would be routed through Facebook’s partner for fundraising, Network for Good, which sends the checks from donations to the intended recipients twice a month. She said she was in touch with Facebook, Network for Good and the Jewish Federation of Pittsburgh and was confident the money would go to where it’s needed.

“I’m in touch with all the players as far as the money was concerned,” she said. “I’m also very concerned about getting people’s money where it needs to go. I’m confident the money will serve the purpose.”

Another GoFundMe campaign that’s raised a few thousand dollars is the Pittsburgh Chevrah Kadisha Fund, which is fundraising to pay for experts on Jewish burial to travel to Pittsburgh and assist in traditional Jewish end-of-life practices. David Zinner, executive director of Kavod v’Nichum, said the nearly $4,200 raised is paying for him and others to travel to Pittsburgh to help the community directly. A member of the Pittsburgh team who assists in burials was killed on Saturday, Zinner said.

“We know that they may need support. They may not have enough people or they may need moral support. It’s a whole range of resources,” he said. “We’re not going to take the place of the local team, we’re here to assist.”

Organized by Pittsburgher Jason Baim, this GoFundMe has raised more than $4,300 and is set up to go directly to the Jewish Federation of Pittsburgh. Baim didn’t return a phone call asking for comment.

Other funds with less traction:

This fund, organized by Gerard Darius, has raised a little more than $300. The fund is set up to go directly to Tree of Life.

While this fundraiser hasn’t taken off (it’s raised only $38), Yosef Rabin set up this GoFundMe to raise money specifically for armed guards and other security measures at Tree of Life, he said. The money raised will go directly to Tree of Life.

Tree of Life * Or L'Simcha Attack

This fundraiser by Matt Redard of Texas garnered $110 in donations as of 8:30 p.m. Monday. The fund is set up to route all money raised to Tree of Life. In an email Monday evening, Redard said he wanted to raise money for the victims as and act of faith; the fundraiser’s goal is set for $10,000.

Organized by two pharmacy students at the University of Pittsburgh, this fundraiser is centered on selling bracelets *with the message #StrongerThanHate on them* for $4 each to raise money for the Jewish Federation of Pittsburgh's Our Victims of Terror Fund. The Google form indicates that either the students or the university will handle the money before it’s sent to the Jewish Federation. In an email on Tuesday, one of the student organizers, Katelyn Rudzik, said she and others in the pharmacy school have sold 98 bracelets so far, raising about $400. Their goal is $1,000, she said, and they plan to sell the bracelets through next Wednesday. Rudzik said many students and faculty in the pharmacy school have connections to Squirrel Hill, so the tragedy was personal for them.

"The students, faculty, alumni and staff of Pitt Pharmacy are a tight knit community. A lot of us live in Squirrel Hill or have loved ones that live in Squirrel Hill and might know people that regularly go to Tree of Life," she wrote. "Our neighbors, friends, family and patients have been impacted as a result of this tragedy and we just want to help in whatever way we can."

[The Jewish Federation of Pittsburgh's Victims of Terror Fund will dedicate 100 percent of donations to the cause, according to Adam Hertzman, the federation's director of marketing. He added in an email that donors "should be made aware that certain fundraising platforms assess fees—some above and beyond the credit card processing fees. Our normal platform does not assess additional fees."]

Victims of the Tree of Life Synagogue shooting

While this fund hasn’t raised any money yet, organizer Jeff Scheidemantle of Regent Square said he was moved by Saturday’s tragedy to set it up and invited more than 800 people to donate. The fundraiser is not connected directly to a nonprofit. PublicSource reached out to Scheidemantle on Monday. He said he plans to cut the families individual checks or give the money to Tree of Life if the campaign raises money.

The more than $3,200 raised in this fundraiser will go toward memorial crosses to commemorate the victims of Saturday’s attack. It is not intended to go directly to the victims or their families. Organized by father and son Greg and Chris Zanis, the money will go into Greg Zanis’ bank account and be used to buy materials to set up cross memorials for the victims, according to the GoFundMe page. PublicSource reached out to the Zanis duo but did not receive a response.

What other organizations are doing:

Both Tree of Life and the Jewish Federation of Pittsburgh are collecting donations directly. You can donate to those funds here and here.

The United Way of Southwestern Pennsylvania is collecting donations for Tree of Life and matching all donations made up to $100,000. All money raised will “support psychological services...families, general services, reconstruction, additional security throughout the community, medical bills for all those involved, and counseling and other services that may prove necessary in the future,” according to an email from United Way. Find more information here.

Additionally, two banks with local branches said they will be collecting funds to help support victims. Key Bank is planning to donate money in the coming days, and Dollar Bank is organizing to raise funds, too.

The PNC Foundation on Tuesday announced that it will donate $100,000 to the Jewish Federation of Greater Pittsburgh and match PNC employee contributions to the federation, up to $100,000. “The people of Pittsburgh form a very close and tight knit community, and the impacts of this senseless shooting are far reaching, extending well beyond Squirrel Hill,” said Bill Demchak, PNC chairman, president and chief executive officer.

Updated on 10/30/2018 to include new information from the Jewish Federation of Greater Pittsburgh and PNC Bank.