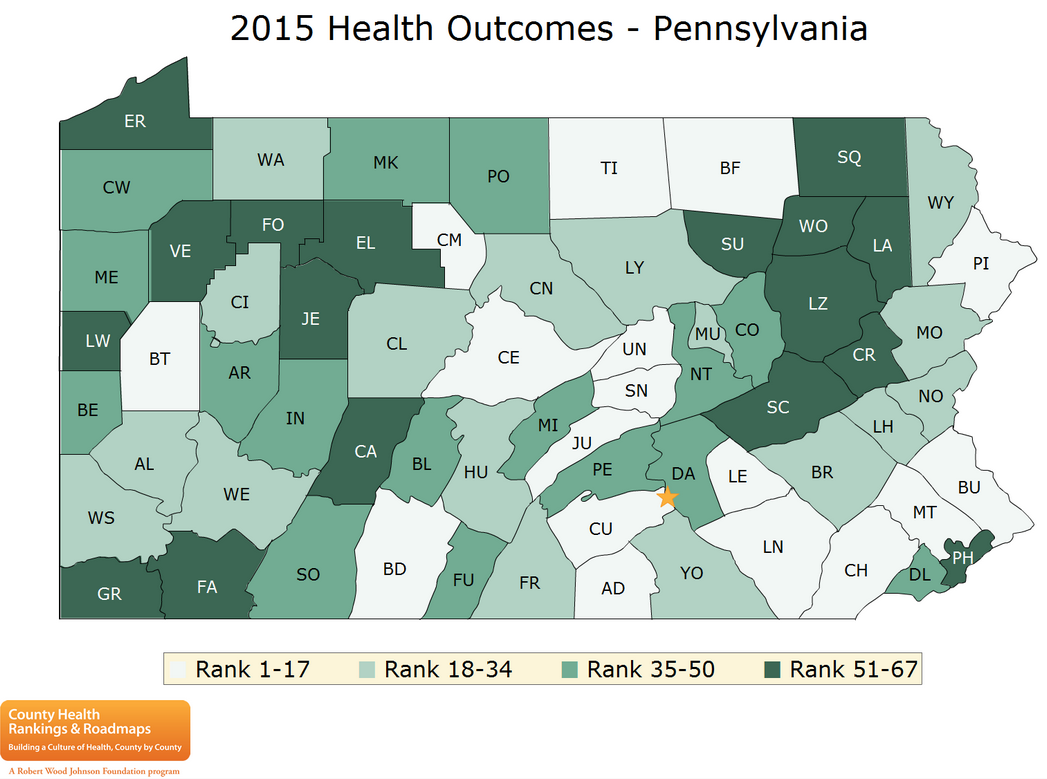 Find out how healthy people are in your county and what factors are taking away from length and quality of life in the annual county health rankings, released last week.

The Robert Wood Johnson Foundation, with the University of Wisconsin Population Health Institute, has once again studied health outcomes in all the counties in the nation.

Allegheny County said in a press release that its ranking had improved over last year from 40th to 34th out of the 67 counties in Pennsylvania.

“We are excited to see the improvement noted in our health outcomes, but recognize that we still have work to do. This is particularly true in areas related to health behaviors, environmental and social factors that impact Allegheny County residents,” said Allegheny County Health Department Director Dr. Karen Hacker. “Our recent health assessment and upcoming Allegheny Health Survey will help us get more timely data to determine progress.”

The county attributed its improvement to a decrease in premature death between 2010 and 2012.

When considering health behaviors, social and economic factors and the environment, the county lost a few spots from last year and landed at 19th.

While there have been improvements in preventable hospital stays, violent crime and air pollution (PM 2.5), obesity and sexually transmitted diseases have climbed and mammography screening has declined.

PennLive focused on Dauphin and Perry counties, which were ranked 45th and 50th overall, respectively. From its story:

The measures that considered quality of life of were based on surveys of adults who reported fair or poor overall health and estimated the number of poor physical or mental health days, along with low birthweights.

In that measure, Dauphin County had an overall ranking of 55th out of Pennsylvania's 67 counties. Dauphin County ranked substantially lower than the national average in all those measures...

Go here for a report summarizing how health outcomes and factors influenced the rankings in Pennsylvania.

Dig deeper into the data for your county here.