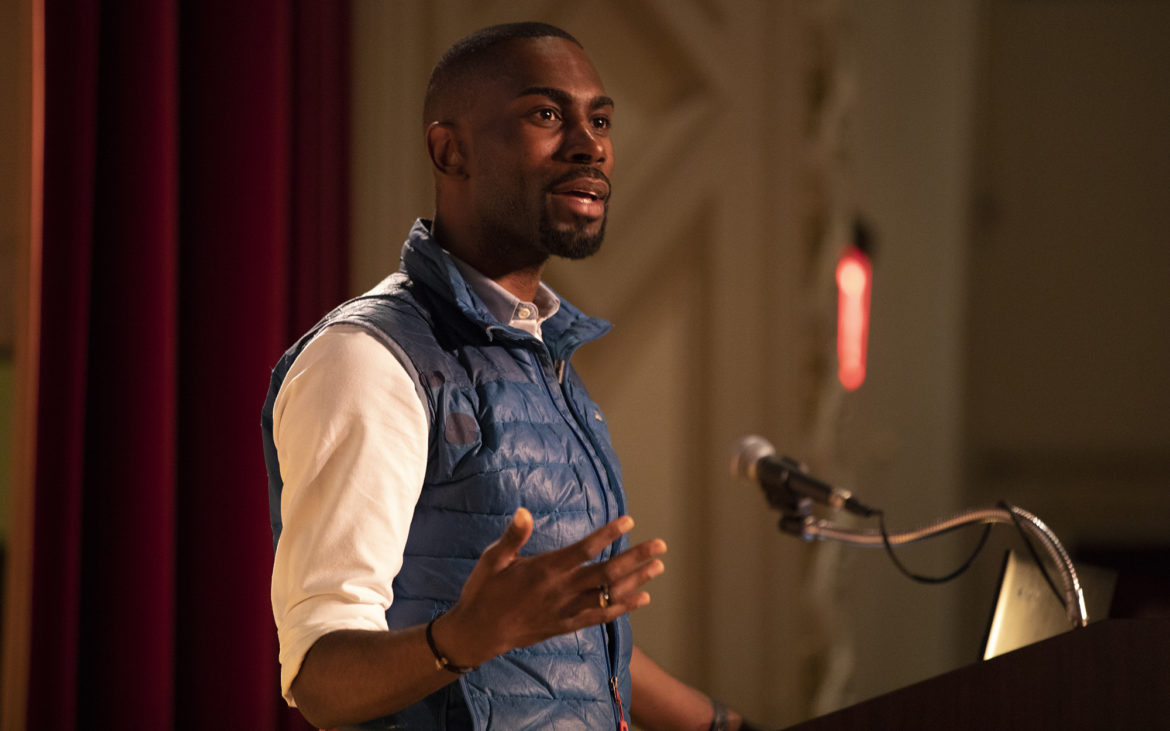 Activist DeRay Mckesson spoke at the Carnegie Library Lecture Hall on Feb. 12 at an event hosted by PublicSource. (Photo by Kat Procyk/PublicSource)

The conversation about race, justice and the role of police is “in a fundamentally different place,” said Mckesson, a high-profile activist, author and host of Pod Save the People. Yet the number of reported killings of citizens by police officers across the nation has stayed roughly the same.

“I’m mindful every single day that we have not won yet,” Mckesson told a crowd of about 250 people in Pittsburgh at a Feb. 12 event hosted by PublicSource.

Broadly known for his activism after Brown’s death in Ferguson, Missouri, Mckesson has been accused of exploiting what happened and the work of other grassroots activists for personal gain. At a book talk in St. Louis last September, a self-identified Ferguson activist interrupted Mckesson and claimed he is “a liar” who “did nothing in Ferguson for us” and has only “made money constantly off of us.”

“You have way more power than you believe, especially at the local level.”

Some Pittsburgh-based activists also pushed back via social media about Mckesson’s appearance in Pittsburgh, calling out Mckesson for profiting off of Ferguson and saying that someone from Ferguson should have been asked to speak.

Responding to a question about the criticism, Mckesson told the audience he had only a small social media following when he arrived in Ferguson but that people sought him out as an information source as protests were happening. He said people criticize him for going on TV but countered that, “I’m on TV talking about police killings.”

Despite his following — for instance, a Twitter audience of more than one million followers — Mckesson said he does not view himself as a top-down leader.

“You never have to have a membership card to be part of a movement,” he said, explaining the importance of local activism. “You have way more power than you believe, especially at the local level.”

But Mckesson also noted the power of having a large audience. He said he contacted Jay-Z and other celebrities, asking them to allow signature collection at concerts to help raise quick support for an amendment to end Florida’s voting restrictions on convicted felons.

During the 2018 midterm elections, voters in Florida passed the amendment, restoring the right to vote to about 1.5 million people. 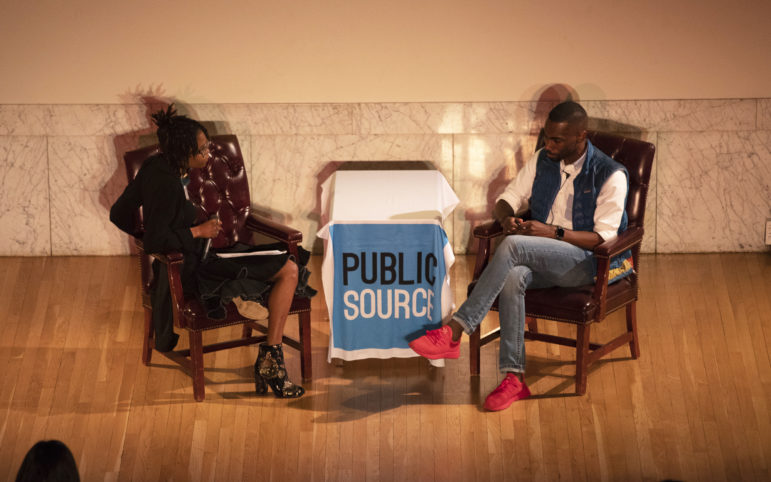 As an example, he explained that the minimum dollar amount for theft to be considered a felony is $300 in Florida. Felons in Florida still cannot hold public office.

After protests in Ferguson, Mckesson and fellow activists began collecting data on crime and policing, including a project called “Mapping Police Violence,” which tracks police killings of civilians across the country. This work is published by Campaign Zero, a police reform organization, which also examines police handbooks and union contracts to identify policies viewed as problematic.

“The reason we did this project is [to find] what are the things that people don’t see,” said Mckesson, who is a member of Campaign Zero’s planning team. “What are the things we don’t know that are leading to [a lack of] accountability?”

Mckesson spreads his ideas and these findings through his podcast, speaking tour and in his book, “On the Other Side of Freedom: The Case for Hope.”

He appears frequently in media interviews and has met with numerous celebrities and politicians, including former President Barack Obama.

He noted that he did not have interest in meeting with President Donald Trump because, Mckesson said, “I honestly don’t think he cares.” 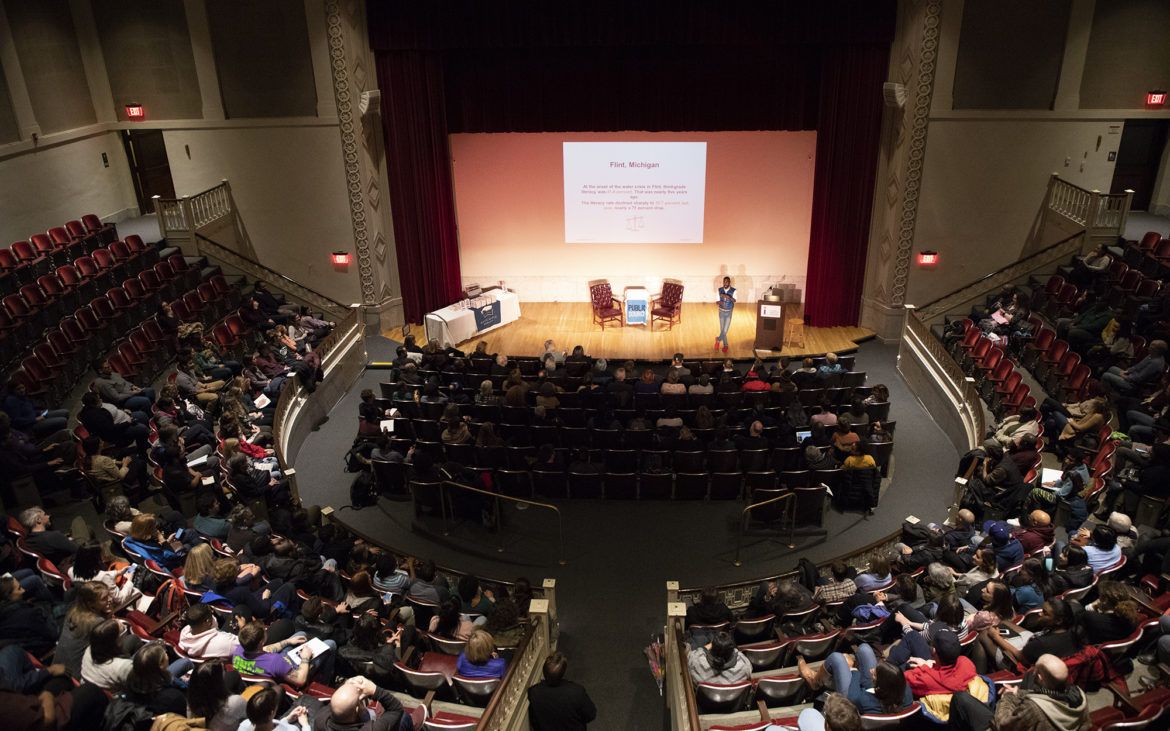 Activist DeRay Mckesson has been criticized by other activists who believe he's profited off of the activism and protests that took place in Ferguson, Missouri. (Photo by Kat Procyk/PublicSource)

Again addressing criticism, Mckesson said he wants activists to have access to his work to use themselves.

“There are two styles of organizing: One is ‘follow the leader, I know the work well, do what I say’...and there’s another one that is we all should learn as much as possible, we should all figure out what our role is,” Mckesson said. “And it’s why we made all our data public.”

McKesson’s background is as an educator. He taught sixth grade math with Teach for America and was an administrator in both the Baltimore and Minneapolis public school systems.

His Tuesday evening talk mirrored a teaching lesson in which he presented slides, called on volunteers to read and posed questions for audience members to answer.

When asked by one audience member about getting community members interested in policy and social issues, McKesson explained that people are already informed by their life experiences.

“Part of our work is to remind people [that] you have the power and ability already to interrogate everything around you and the best thing I can do is help sharpen those skills,” Mckesson said. “But you actually already had the thing before you entered the room.”

Erin West is an editorial intern for PublicSource. She can be reached at erin@publicsource.org and @erinrawwest.