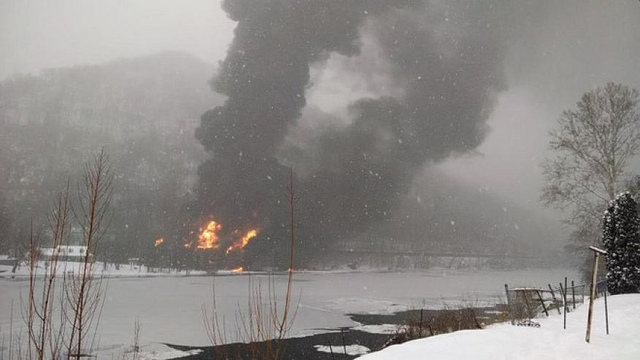 The crude oil that exploded from a derailed train in West Virginia in February was chock full of so much combustible gas that it would have been barred from rail transport under new federal regulations set to go into effect in April, according to The Wall Street Journal.

The news outlet reviewed test results performed on the oil before the train left North Dakota that showed it contained a high level of volatile gases.

The oil’s vapor pressure, a measure of volatility, was 13.9 pounds per square inch, according to the Feb. 10 report by Intertek Group PLC.

That exceeds the limit of 13.7 psi that North Dakota is set to impose in April on oil moving by truck or rail from the Bakken Shale. Oil producers that don’t treat their crude to remove excess gas face fines and possible civil or criminal penalties, said Alison Ritter, a spokeswoman for the North Dakota Industrial Commission.

Oil from the Bakken Shale has been shown to contain more combustible gases than other types of crude. After a string of derailments where Bakken crude exploded, the state introduced new rules for shipping it in December, according to the article.

The company that shipped the oil, Plains All American Pipeline LP, said it follows all regulations governing the shipping and testing of crude. “We believe our sampling and testing procedures and results are in compliance with applicable regulatory requirements,” said Plains spokesman Brad Leone.

New information about the West Virginia accident is likely to increase regulators’ focus on the makeup of oil being shipped by train. Federal emergency rules adopted last year imposed new safety requirements on railroad operators but not on energy companies.

“The type of product the train is transporting is also important,” said Sarah Feinberg, the acting head of the Federal Railroad Administration. “The reality is that we know this product is volatile and explosive.”

After the nation watched massive orange fireballs explode from the train carrying Bakken crude in West Virginia, members of Congress started adding pressure to the Obama administration to quicken its pace for passing regulations on improving the safety of trains, including new tank car standards.

Some critics are also asking for lower limits on the vapor pressure of oil moved by rail, according to WSJ.