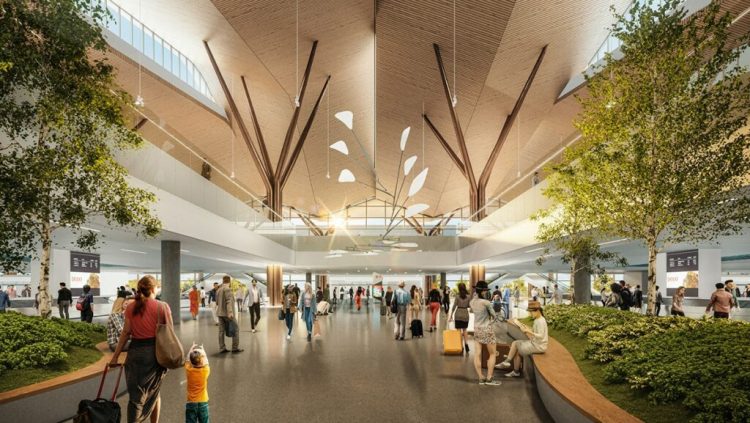 A rendering of the arrivals hall in Pittsburgh International Airport's new terminal. (Courtesy of Gensler + HDR in association with luis vidal + architects.)

Construction should begin this summer on the $1.4 billion Terminal Modernization Program at Pittsburgh International Airport.

The Allegheny County Airport Authority announced Thursday that a seven-year agreement has been approved by the airlines operating at the airport. That allows the airport authority to seek long-term bond financing for the project and to begin soliciting bids for the work. Airlines are expected to pay for the work through landing fees and other charges.

“This approval is further proof of the airlines’ belief in the need for modernization, the strength of this market and their commitment to Pittsburgh,” airport authority CEO Christina Cassotis said in a statement. “We are committed to continuing our partnership with the airlines, keeping our costs stable and staying on budget and on schedule.”

The 700,000-square-foot terminal will consolidate ticketing, security checkpoints, baggage claim and a multi-modal complex with a 3,300-space parking garage. It will replace the existing landside building and remove the need for the underground tram.

The airlines approved preliminary work for the site in March, following a year-long pause due to the pandemic. Heavy construction is expected to begin this summer.

The airport authority expects the project to use about 12,000 tons of steel, 94,000 tons of concrete and more than 354,000 square feet of wood materials, much of which the airport hopes to source locally.

“The Terminal Modernization Program is a critical infrastructure project for the region and will deliver long-term economic benefits including jobs for more than 5,500 local construction and skilled trades workers,” said Rich Fitzgerald, Allegheny County Executive.

Construction is scheduled to be completed by the end of 2024, with the opening in early 2025.

“The new seven-year agreement, which fully approves the modernization program, marks a major milestone in a collaborative effort to develop and construct a world-class airport facility that will benefit Pittsburgh area customers for years to come,” Patrick Bowes, manager of corporate real estate for American Airlines, said.