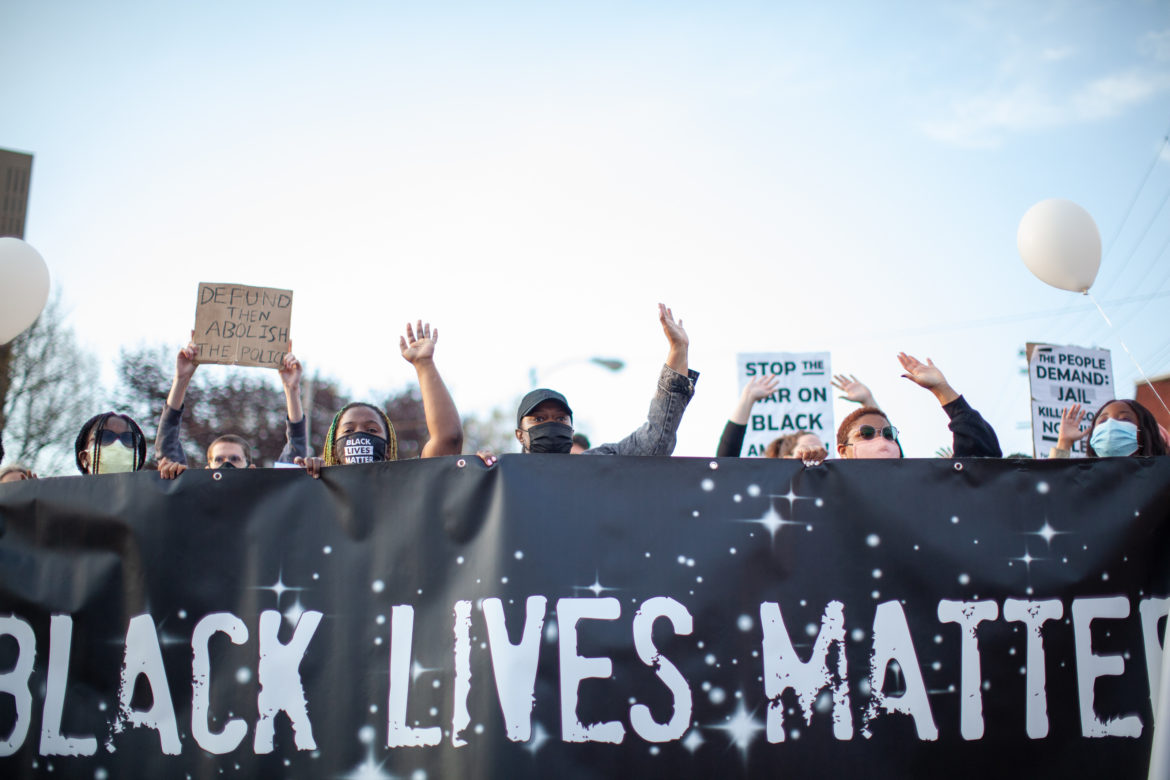 People gather Tuesday evening in the Hill District after the guilty verdict was announced in the Derek Chauvin trial. In this photo, some of the people hold their hands up, shouting “Don’t shoot!”, as they pass a police cruiser on Crawford Street. (Photo by Quinn Glabicki/PublicSource)

“The fact that people were on edge that this man might not be found guilty speaks volumes about the changes that need to be made to our criminal justice system." That's how Brandi Fisher, president and CEO of the Alliance for Police Accountability, described the guilty verdict of former Minneapolis police officer Derek Chauvin in a rare rebuke for police violence Tuesday evening.

Fisher was at Freedom Corner in the Hill District with roughly 150 Pittsburghers to celebrate the conviction of Chauvin, who was found guilty of murdering George Floyd last May.

The rally, which was organized by the Alliance for Police Accountability, Black, Young, & Educated, Stop the Station and other groups, began with remarks from activists, artists and public officials. The group then marched through Uptown and Oakland, ending at Flagstaff Hill.

Fisher said she hoped the verdict would set a precedent for accountability and systemic change at the federal level. 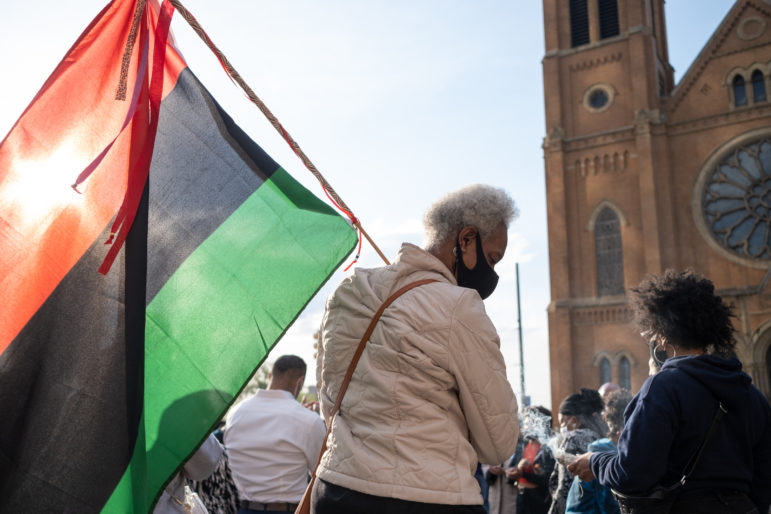 A woman holds a Pan-African flag as people gather at Freedom Corner in the Hill District. The flag symbolizes Black liberation in the United States. (Photo by Quinn Glabicki/PublicSource)

Pittsburgh mayoral candidate and state Rep. Ed Gainey, D-Lincoln-Lemington, agreed. “We can never, ever go back to settle for overpolicing in our neighborhoods, knowing that the only one going to jail is us,” he told the crowd.

Pittsburgh Mayor Bill Peduto released a statement of support for the verdict. “We cannot erase centuries of systemic racism, and our efforts to uplift and support our minority neighbors must continue today and for years to come,” the statement read.

The verdict brought hope and some justice for Floyd’s family, many attendees said. But they stressed that there is more work to be done, noting recent police killings like that of Daunte Wright, a 20-year-old Black man who was fatally shot by a police officer during a traffic stop on April 11, about 10 miles away from where Floyd was murdered. 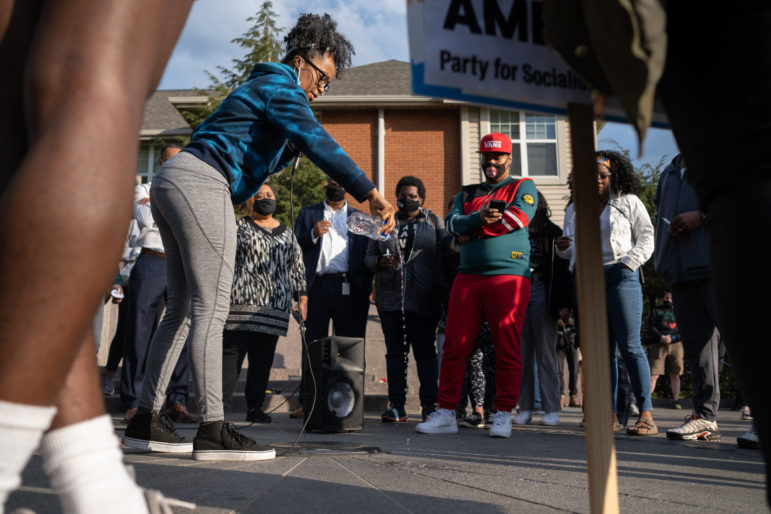 Organizers pour water and recite “àse” (or "ashe"), a Yoruba word meaning "in agreement with" or "let it be done." (Photo by Quinn Glabicki/PublicSource)

Some other attendees felt less celebratory. “It seems like a really empty justice. Like what about Kim Potter and all the other cops who killed Black people?” said Abhishek V.

Floyd's death sparked the largest social justice movement across the county since the Civil Rights Movement, including a summer of protests locally, and reignited a debate over the role of police in the Pittsburgh area.

Allegheny County Executive Rich Fitzgerald voiced his support of the verdict in a statement Tuesday: “All of America that saw the video of this was sickened by what happened. The evidence was simply overwhelming.”

The Pittsburgh Bureau of Police also released a statement on the verdict.

See more photos of the rally Tuesday evening below: 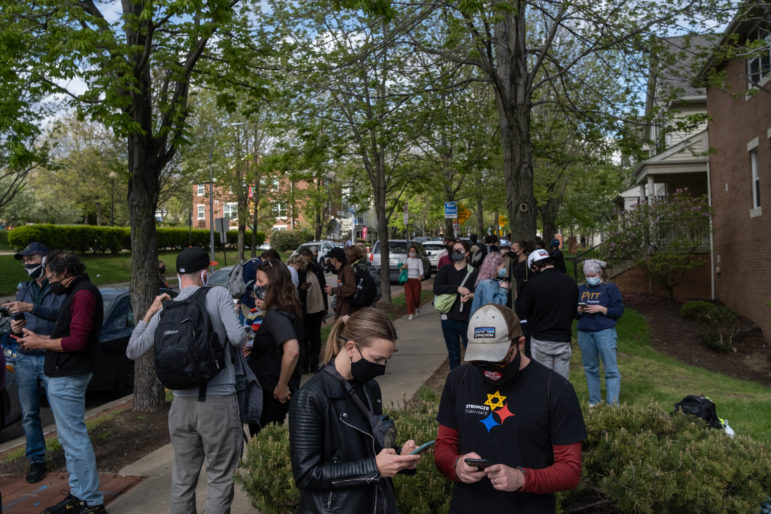 People wait for the jury’s verdict to be announced at Freedom Corner in the Hill District. (Photo by Quinn Glabicki/PublicSource) 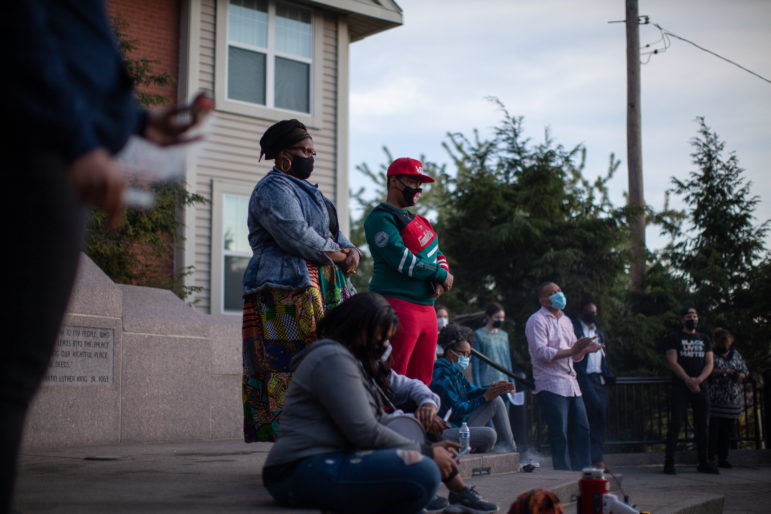 Organizers burn sage during a moment of silence in remembrance of those lost to police violence. (Photo by Quinn Glabicki/PublicSource) 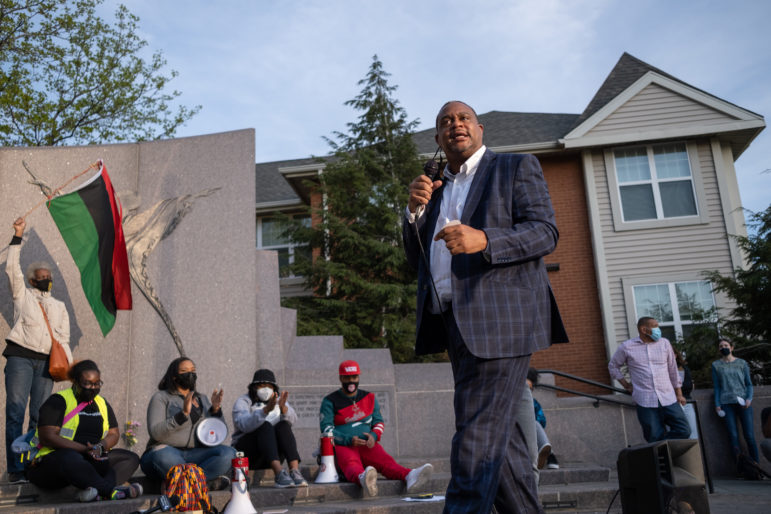 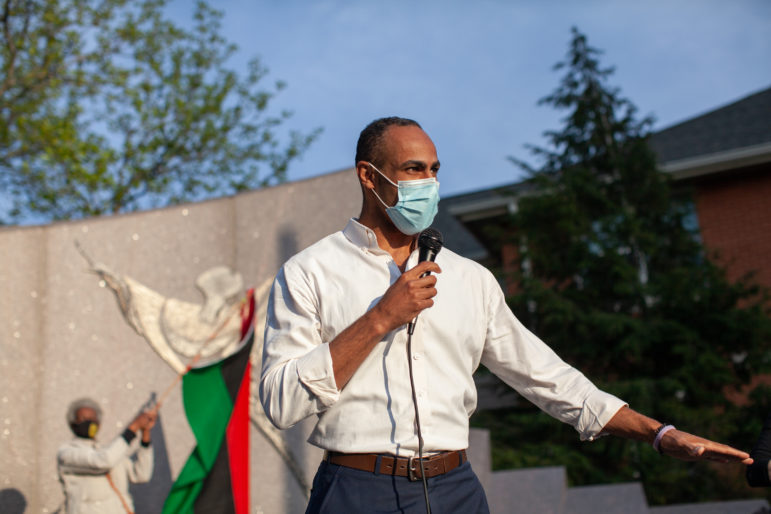 Jerry Dickinson, law professor at the University of Pittsburgh School of Law, a candidate for Pennsylvania’s 18th District and a former U.S. Congress candidate, shares his personal experiences with police violence. (Photo by Quinn Glabicki/PublicSource) 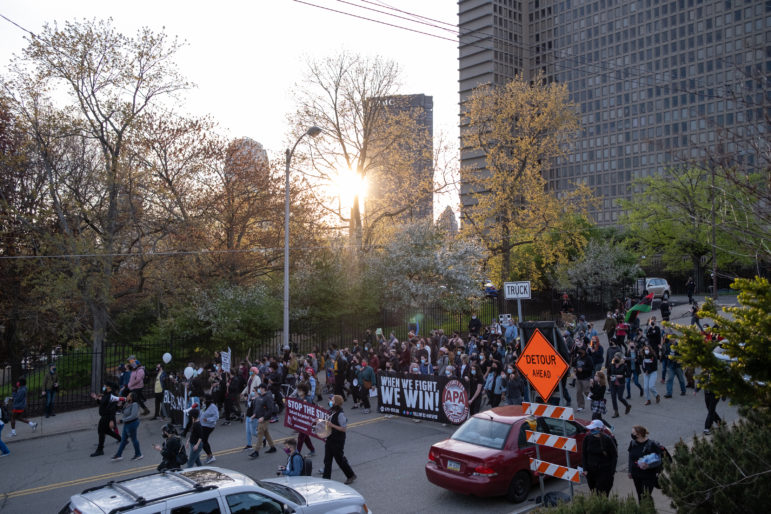 The group holds signs and chants as it marches down Crawford Street. (Photo by Quinn Glabicki/PublicSource) 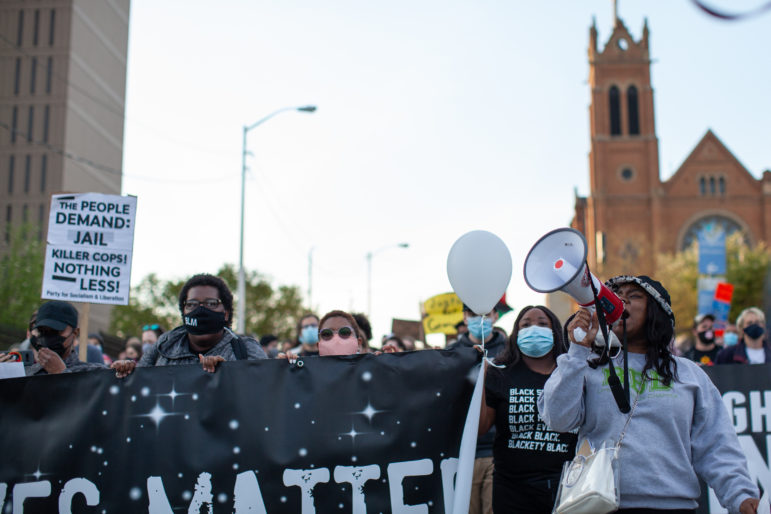 The crowd of about 150 march down Crawford Street toward Centre Avenue on Tuesday evening. (Photo by Quinn Glabicki/PublicSource) 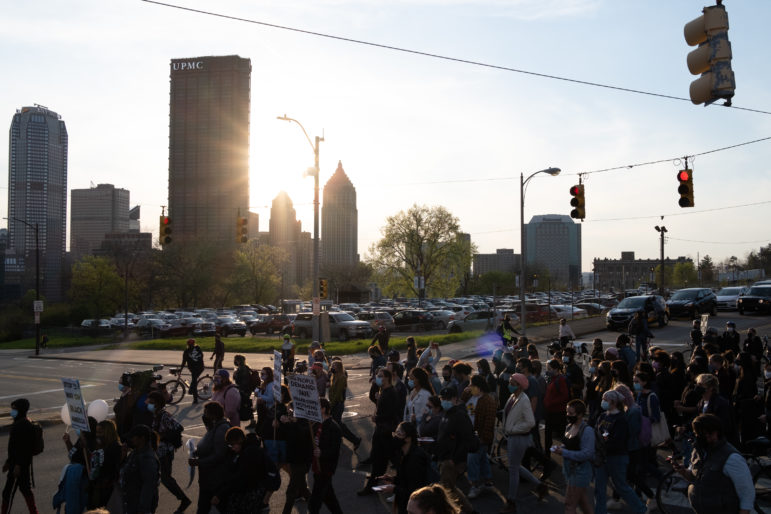 People who gathered following the guilty verdict in the Derek Chauvin trial turn onto Crawford Street as they begin to march from Freedom Corner to Flagstaff Hill. (Photo by Quinn Glabicki/PublicSource)