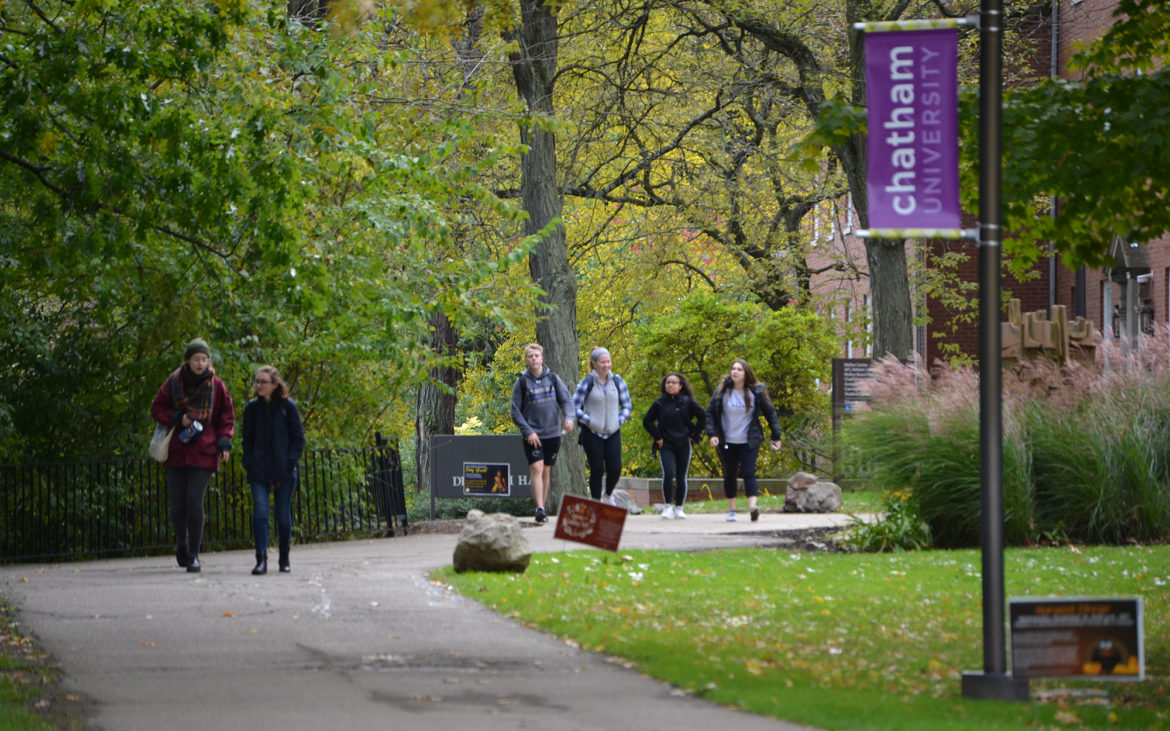 Chatham University is about 100 feet away from the Tree of Life synagogue. (Photo by Kinsley Stocum/PublicSource)

The synagogue where 11 people were killed on Saturday in what is believed to be the deadliest attack on Jews in U.S. history is 100 feet from a campus entrance of Chatham University.

Students could hear the unmistakable sound of gunshots. Coupled with multiple text messages sent to every student around 11 a.m., warning of an active shooter on campus, terror gripped many members of the student body and staff as well as about 175 others who were on campus for the Friends and Family Weekend and another event.

A text alerting students that the shooter was not, in fact, on Chatham grounds went out three minutes later.

Chatham police barricaded both entrances to the university. One entrance to the campus is on Wilkins Avenue, across the street from Tree of Life in Squirrel Hill, and the other entrance is on Fifth Avenue.

The nearby shooting has prompted the administration of Chatham University to rethink its safety policies and response trainings, according to Bill Campbell, Chatham’s vice president of marketing and communications.

Julie Swedberg, 19, heard the gunshots. She was sitting in her dorm room.

“We didn’t know what the noise was, then we realized it was gunshots,” she said. 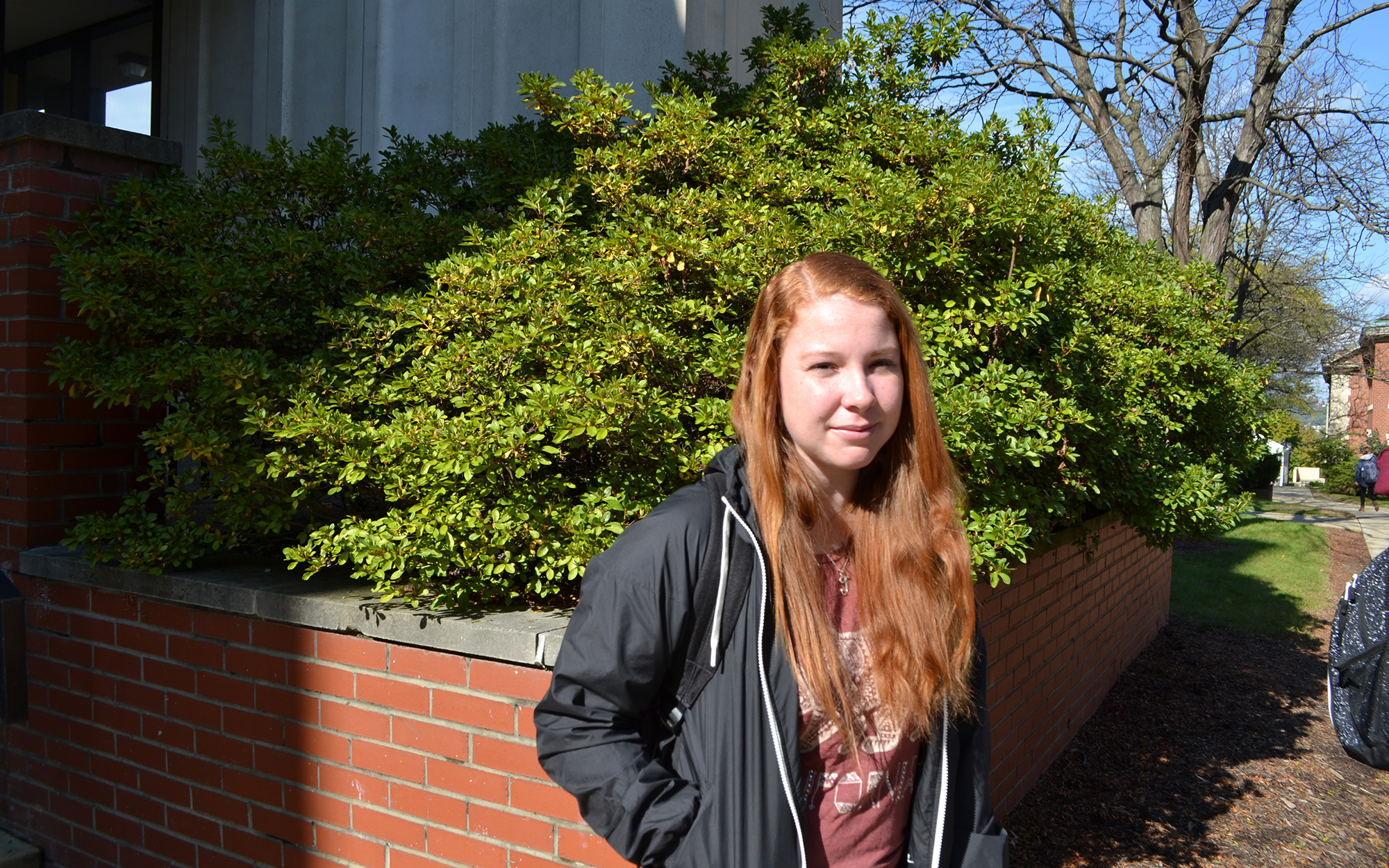 Julie Swedberg is a student at Chatham University. (Photo by Kinsley Stocum/PublicSource)

Swedberg texted her softball team to make sure they were safe. She urged everyone to stay inside. A friend of hers was outside when the alert came that the shooter was on campus. He panicked and ran across the quad to take shelter in a nearby classroom.

On Saturday, assistant professor Carrie Tippen’s first thought was of her students’ safety.

“I thought, I wonder what sounds they can hear?” Tippen said.

On Sunday, she drove to campus because she realized she needed to come up with an escape plan from her office in Lindsay House, an old mansion with several staircases and a large porch. Her office is the first thing you see through the large glass doors of the Lindsay House. Before Sunday, there was only one way in and out from her office.

Tippen couldn’t stop thinking about a blocked door in the back of her office. If a shooter walked up the front steps, she’d have nowhere to go. She’d have no way to alert anyone else in the building.

“I’m the first line in this building,” she said.

She moved a bookshelf that blocked the door and practiced her escape. If a shooter came, she’d go out the back, pull the fire alarm to alert her colleagues and run to the basement.

“We didn’t know what the noise was, then we realized it was gunshots.”

Tippen admitted that she didn’t go to the active shooter training offered in the spring for faculty and staff, but now she wants to prepare for the worst in any way she can. She also wants to make sure her students feel safe and heard. During class on Monday, Tippen said she opened up conversation for the students to share their pain, anxiety, grief and frustration.

Tippen was’t the only Chatham employee shaken by the massacre. Campbell talked about how close everything is in Pittsburgh. “Pittsburgh only has three degrees of separation,” he said.

A Chatham student is related to one of the shooting victims. Campbell said another victim contributed to a research project to enhance services for individuals with intellectual and developmental disabilities.

Campbell spoke quietly as he recounted Saturday’s events and said that things are still raw for the Chatham community — though they recognize it cannot be compared to what the Tree of Life community is experiencing. Campbell talked about explaining the events to his children and nieces after coming home on Saturday.

In the aftermath, he said, Chatham plans to make some changes to its safety policy and procedures.

Chatham’s campus is hilly with old houses serving as dormitories and offices. Each building is distinctive and unique, which is what gives Chatham its charm. But it can be difficulty in moments of crisis.

“It’s run, hide, fight and that’s a very good training philosophy, but then how do you personalize that for where you are?” Campbell said. 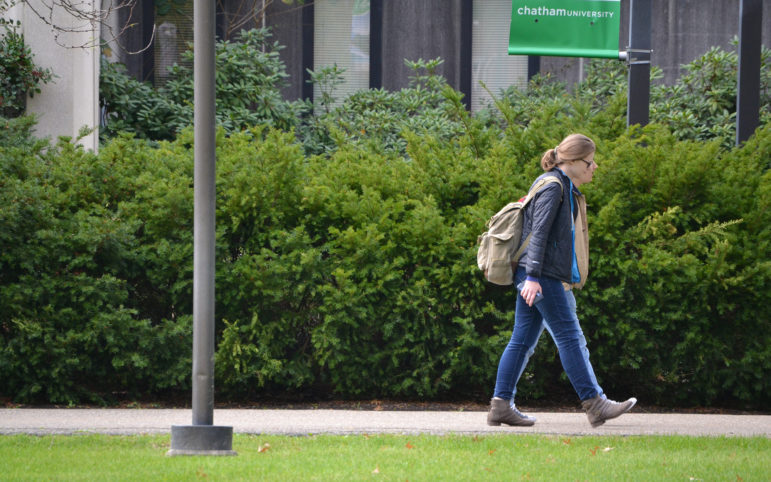 Students at Chatham University received text alerts about a shooter being on campus during the Tree of Life synagogue shooting, but it was later corrected. (Photo by Kinsley Stocum/PublicSource)

Chatham had aimed to publish online an active shooter policy for its faculty, staff and students to access this year. It’s not currently available.

“Obviously, something like this really makes you take a hard look and be like, we need to accelerate that much faster than we were,” Campbell said.

In 2018, Campbell said Chatham held three active shooter trainings: one for all students, one for all faculty and staff and one for incoming students. While Tippen didn’t go to the training in spring, she now wants to make sure she and her students are prepared. When asked if she knew Chatham’s policy, Tippen said, “I feel confident that if I did ask, someone would tell me.”

Tippen, Campbell and some students emphasized that they are not victims, but the loss of life just next door has led to further examination of how they keep campus safe.

“The proximity amplifies everything,” Campbell said.

Brittany Hailer is a freelance journalist based in Pittsburgh. She can be reached at bhailer08@gmail.com. Brittany is a former employee of Chatham.