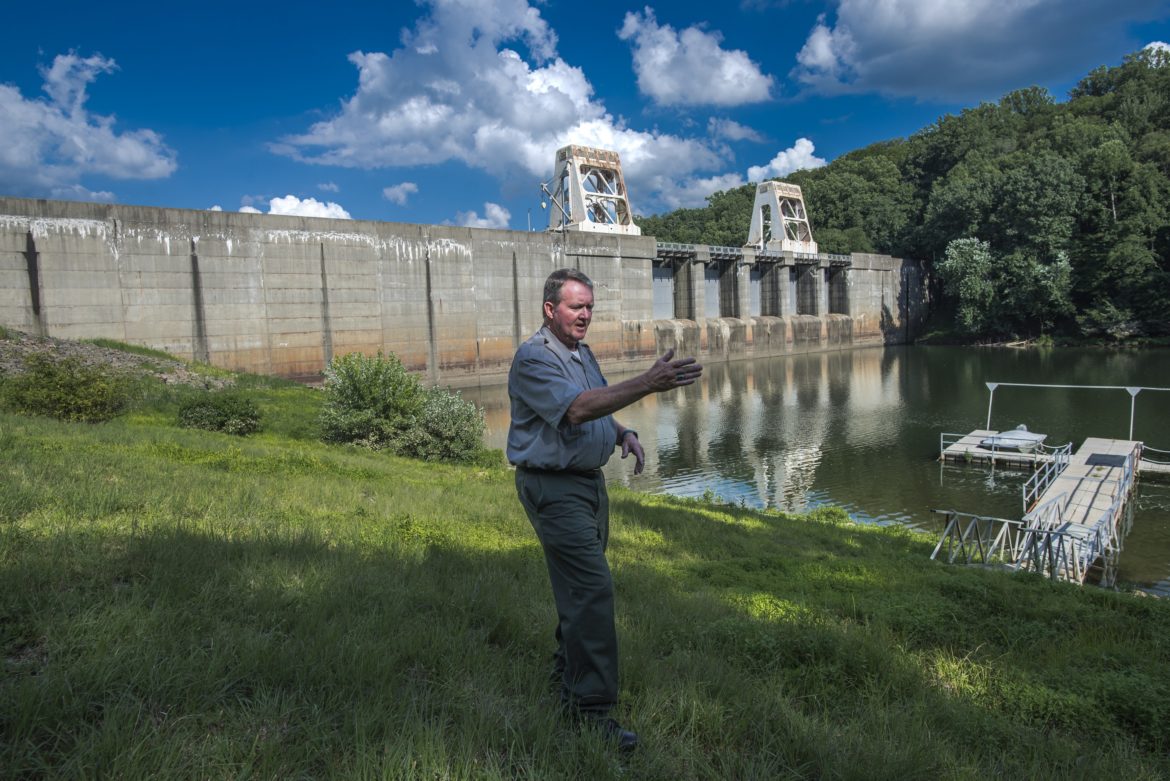 Paul Toman, standing in front of the Loyalhanna dam, explains how Pennsylvania’s system of dams and reservoirs protects Pittsburgh from flooding. (Photo by Teake Zuidema/PublicSource)

Paul Toman points at the two cranes that stand like a pair of steel watchmen on top of the concrete monster that is the Loyalhanna Dam, 25 miles east of Pittsburgh. He says that his team will need those cranes to open the crest gates if the water ever reaches the maximum level of 975 feet.

Toman has a 40-year career under his belt with the U.S. Army Corps of Engineers. Today, he’s the resource manager for the Loyalhanna Dam and reservoir. He knows that 975 feet above mean sea level, the level at which the water would overtop the dam, has never been reached in the 75 years since the dam was built.

“We had a record high pool here in 1972 with Hurricane Agnes,” Toman said. At that point, he added, the water was still 16 feet below the crest of the dam. “We really don’t know what happens when the water reaches 975 feet. The dam has never been tested to its maximum.”

Yet climate change is poised to create unprecedented transformations in precipitation, stream flows and temperature, likely to test the resilience of the system of 16 dams and reservoirs operated by the Pittsburgh district of the corps, which includes the Loyalhanna Dam.

While the dams and reservoirs have stood up to many trials since they were built in the 1940s and 1950s by the corps, their performance is a point of concern because of poor maintenance. And, a series of smaller floodwalls and levees are in even poorer condition. For years there’s been a drought of funding to address the deterioration. Any improvements would be a matter of catch-up, rather than preparation for future effects of climate change.

The dams were built to prevent a repeat of the St. Patrick’s Day Flood of 1936. That disaster put a part of downtown Pittsburgh underwater, killed 62 people in the Pittsburgh area, and caused millions of dollars in damages. Without the Loyalhanna Dam, rain that falls in the 290 square miles of the Loyalhanna Creek watershed would rush unobstructed through the Kiskiminetas River into the Allegheny River and toward Pittsburgh.

“After heavy rains, I’ve seen the level in the reservoir rise 30 feet in one night,” said Toman, swooshing one arm up. If the predictions of climate change models become reality, he may see the water behind the Loyalhanna Dam rise even faster.

Temperatures in Pennsylvania will continue to rise, and precipitation and stream flows will increase, if the assertions from the corps’ June “Ohio River Basin Climate Change Pilot Study Report” are realized.

About a month after the corps released that report, it organized a party celebrating the 75th anniversary of the Loyalhanna Dam. Toman gave a speech in which he proudly mentioned that its construction had cost $5.5 million, and that the dam has prevented an estimated $535 million in flood damages.

Will the dams be able to deal with the surplus of water the climate change models are predicting? Toman thinks they can. “These dams were built ... with a large safety margin,” he said. “They can deal with more water than they were designed for.”

Tom Maier, a biologist with the corps who contributed to the climate change report, agrees: “We’re not concerned about the reservoirs themselves being threatened by lots of rain. Even in really intense storms, we have been able to handle this over the years.” A family under the bridge crossing the Allegheny River in Kittanning. (Photo by Teake Zuidema/PublicSource)

Maier worries much more about local floodwalls and levees in communities along the rivers. “We are already seeing those walls and dikes being overtopped more often. They are oftentimes smaller projects that haven’t been built as robustly.” Many smaller dams and floodwalls are degraded and often not maintained well by local authorities, according to Maier. As an example, he mentions a decaying concrete floodwall between North Water Street and the Allegheny River in Kittanning.

Still, the climate change report mentions the performance of several dams in the Ohio River Basin as unsatisfactory or poor. Among those are three dams that are part of the flood protection for Pittsburgh: the Kinzua Dam and Eastern Branch Dam in the headwater of the Allegheny River, and the Youghiogheny Dam in the Youghiogheny River.

The report states: “Significantly higher incoming flows entering poor-performing projects could jeopardize the integrity of the dam structure itself or result in uncontrolled spillway discharges in an effort to protect the dam.” The authors of the report conclude these dams need serious repairs before the full effects of climate change are here.

Toman acknowledges that the supporting structure around the Loyalhanna Dam also is in need of repair: “The dam itself is safe, but the concrete bridge across the dam is disintegrating.” That bridge supports the two steel cranes that would need to raise the crest gates if the pool were to reach its maximum level.

The money for the repairs of the dam, some $6.5 million, was requested in 2012 but has not been made available yet. Toman hopes the funding comes in fiscal year 2018, but there’s no guarantee it will. He sighs: “The corps has a very long list of projects nationwide that are in need of repair.”

According to Gregory Scott, senior project manager at engineering firm Buchart Horn, the corps doesn’t get enough money from Congress to maintain its aging dams and reservoirs at an appropriate level. “We should be talking now about how to improve our infrastructure to prepare for the changing climate,” Scott said, “but the sad truth is that we don’t have enough money to maintain what we have.”

Scott doesn’t believe climate change will lead to a repeat of the St. Patrick’s Day flood of 1936. He is concerned, however, that, with the dams approaching their life expectancy and the corps not having enough resources, problems are inevitable. Scott’s worries also center around the smaller, local streams that don’t have any flood controls at all. “Pittsburgh is an old city; we have built over many of our streams and filled in our streams. The water still has to go somewhere.” He mentions the flooding of Washington Boulevard in August 2011 that killed four people. “We’re going to see more and more of that.”

Flash flood problems in and around Pittsburgh are aggravated by a dysfunctional stormwater system that several times a year is overwhelmed by downpours and then dumps raw sewage in the rivers. The Allegheny County Sanitary Authority’s plan to fix this problem is estimated to cost upward of $2 billion.

Toman has seen what floods can do. In 2005, he  was part of a team from the corps that cleaned up the debris in New Orleans after Katrina. In 2012, after Hurricane Sandy, he spent 44 days in New York City, setting up emergency generators for hospitals and other critical infrastructure. Paul Toman points to the board in his office on which they update water levels and outflow of the Loyalhanna and Conemaugh reservoirs. (Photo by Teake Zuidema/PublicSource)

Toman gets a deep satisfaction from the work he’s done in places that were hit by flooding. “You work a lot of hours, generally seven days a week, 12 hours per day. It’s stressful and you get tired, but it gives a sense of accomplishment to make life a little easier for people that have been impacted by a disaster.”

The daily routine at the Loyalhanna Dam is less stressful. Standing on the edge of the reservoir, Toman mentions the most important number of that day. “Today, the pool level is at 922.51 [feet above mean sea level]; this means the reservoir holds only 3 percent of its capacity.”

Every morning, Toman and his staff report to the corps’ headquarters in downtown Pittsburgh how high the reservoir level is. Later that morning, they receive instructions from headquarters on how much water, if any, they’ll have to discharge that day.

"The dam has never been tested to its maximum.”

The dams and reservoirs are mainly built to prevent flooding and keep water levels high enough for navigation on the Allegheny and Monongahela. In times of drought, 70 percent of all the water that flows past Point State Park in Pittsburgh has been in one of the 16 reservoirs.

Although the system minimizes flood risk, it can’t prevent all flooding. When a lot of rain falls or snow melts downstream from the dams, the water will flow to Pittsburgh without ever entering a reservoir. Also, once a reservoir reaches its maximum pool, the water needs to be released, no matter the consequences.

That’s why communities in and around Pittsburgh experienced heavy flooding in 1996 when rapid snow melt coincided with heavy rainfalls and again in 2004 when Hurricane Ivan drenched the area. Minor floods can happen every year, especially along the Monongahela.

The corps' climate projections show winters in Pennsylvania with less snow but more precipitation falling in the form of rain. As a consequence, the region could experience more erosion and increased potential for flash floods. It could also mean an increase of up to 50 percent in annual river flows in the headwaters of the Ohio —  that is, the Allegheny and Monongahela rivers and their tributaries. The Braddock locks and dam in the Monongahela river near Braddock. The Army Corps of Engineers has to maintain these structures to keep the river navigable. Locks and dams are not for flood protection. (Photo by Teake Zuidema/PublicSource)

The third National Climate Assessment, published in 2014, stated: “Heavy downpours are increasing nationally, especially over the last three to five decades, with the largest increases in the Midwest and the Northeast.” Precipitation that falls in heavy downpours already increased in the Northeast by 71 percent between 1958 and 2012.

"The sad truth is that we don’t have enough money to maintain what we have.”

The fourth National Climate Assessment, now waiting for approval from the White House, states that the average daily maximum precipitation in the Northeast has increased 20 to 29 percent between 1901 and 2016.

Those extreme downpours are exactly what Southwestern Pennsylvania doesn’t need. “We are one of the most flood-prone areas of the country in terms of flash flooding,” Palko said. “With a flash flood, the rain is so intense that it causes a stream or a creek to flood within the hour.”

From Loyalhanna to Texas

Just last month, Hurricane Harvey dumped 50 inches of water and put Houston and other areas in Texas under several feet of water. The consensus among climate scientists is that the intensity of the downpour was fueled by climate change. Climate change made the bad storm catastrophic.

Toman was in Texas to help, the way he did after Katrina and Sandy. Once again, he had been working with a team of the corps to restore power to areas that were hit by the hurricane. Can he foresee such a disaster in Pennsylvania? “I hope not,” he said over the phone, “but there’s no way you can ever know for sure.”