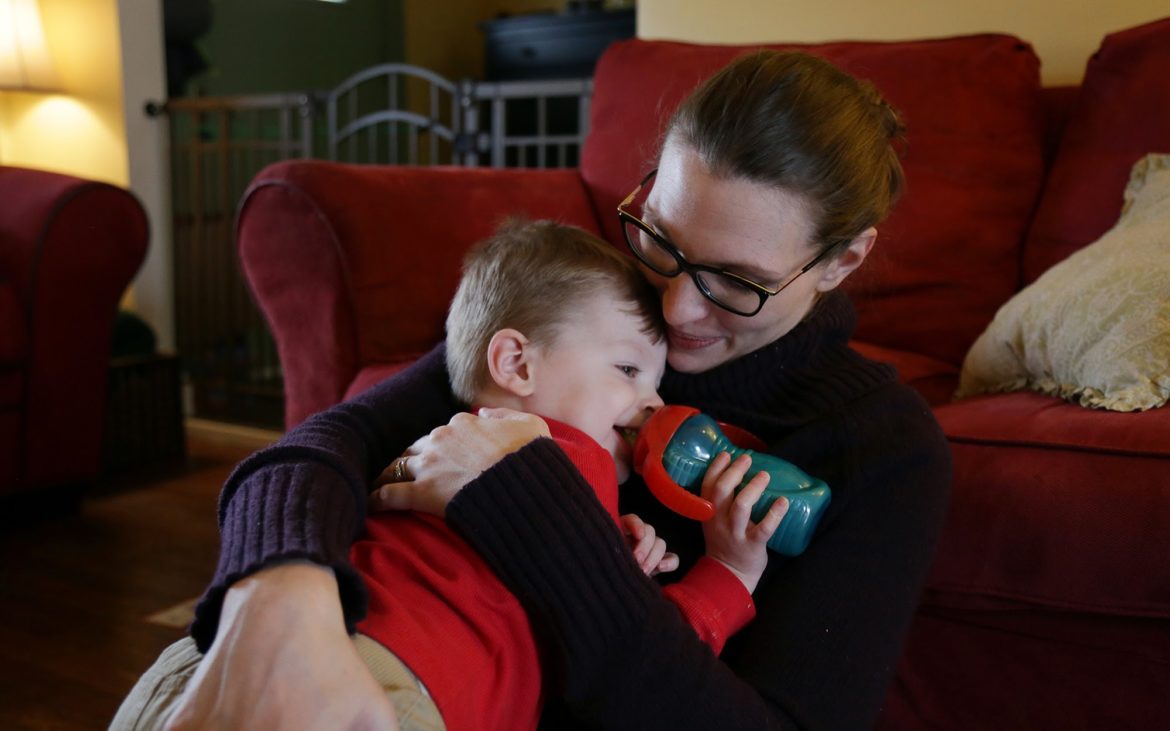 Bridget Urda, 33, hugs her son, Clayton, at their home in Morningside on March 14, 2017. Urda recently learned her family's home has elevated lead levels, and she is concerned about her son and if she and her husband will have to wait before trying to have another child. (Photo by Ryan Loew/PublicSource)

Bridget Urda sent her lead testing kit to the Pittsburgh Water and Sewer Authority on Aug. 9, 2016. She wouldn’t see her results for nearly six months.

Working as a nurse and raising her 2-year-old son, Clayton, she didn’t have time to worry when the results didn’t come. Urda just assumed it meant her levels weren’t high and that the water authority was focusing on those who had elevated lead levels in their water.

But on the morning of Jan. 11, Urda’s dog began barking, alerting her to a PWSA crew outside their Morningside home. It was then that she decided to ask for her results one more time. The results arrived in her email inbox that evening.

The test showed her water contained 16.4 parts per billion of lead — 1.4 ppb above the limit the Environmental Protection Agency says requires action.

Immediately, 33-year-old Urda thought of the future, of her son and her family as a whole.

“I was freaked out… Are we going to have another kid? And if my level’s high, how am I going to do this?” Urda said. “What if we can’t have any more for awhile?”

Urda represents one of the most vulnerable groups to lead exposure — families with kids or expecting children. As Pittsburgh struggles to address lead contamination of its drinking water, public and private efforts are being focused on children and pregnant women, low-income households and homes with confirmed elevated lead levels in the water.

Stopping lead exposure is expensive. How much it sets you back depends on if you choose the temporary solution of filtering the water or the permanent fix of replacing the lead pipes. But low-income residents, and frankly anyone who doesn’t have hundreds or thousands in savings, don’t really have a choice.

“As Pittsburgh looks at this problem, it’s great they have this 80 percent solution, but that other 20 percent of the population is going to require five times the effort."

“For some people, it's just an inconvenience,” said Paul Schwartz, a D.C.-based clean water policy advocate, “but for people who have no money, they're literally being forced to drink lead and to cook with lead. And, to me, that just seems so barbaric and unjust.”

The Pittsburgh city government along with private groups are working to fund solutions for affected households. But they also must raise awareness, says Jamie Gaskin, CEO of the United Way of Genesee County, which is based in Flint, Michigan.

While the city recently announced a $1 million plan to mitigate the lead problems, Gaskin knows from experience that it’s effort, not money that is the deciding factor between clean water and a poisoned future for a significant number of city residents.

“As Pittsburgh looks at this problem, it’s great they have this 80 percent solution, but that other 20 percent of the population is going to require five times the effort,” Gaskin said.

The permanent solution for the lead leaching into our drinking water is attacking the source. In Pittsburgh, according to the PWSA, the source is the lead service pipes connecting private residences to public water mains.

However, replacing those lines can cost thousands of dollars families may not have.

The PWSA says the service lines are owned by both the agency and the homeowner.

Replacement is most cost-effective and healthy when the PWSA and the homeowner can replace the lines concurrently. That’s not generally happening, and partial replacement can temporarily increase lead levels. Bridget Urda, 33, fills a cup of filtered water for her son, Clayton. Urda said she and her husband, Nick, use filters in their kitchen and bathroom sinks. They’re also careful to use filtered water for cooking and brushing teeth, as well as in the humidifier in Clayton’s bedroom. (Photo by Ryan Loew/PublicSource)

The Urdas have looked into replacing their pipes. The estimate for a replacement is $5,000 to $8,000. The cost may mean they have to sacrifice a vacation, though Urda readily admits she’d “rather have all of us be healthy than go somewhere.”

For someone who doesn't have the money on hand, there are still solutions, like home improvement loans — that is, if you are a homeowner.

To qualify for a loan, the upfront cost would be a $100 to $300 appraisal fee, said Steve Kaminski, a lending officer at Progressive Home Federal, a Pittsburgh savings and loans company. The loan could then be paid back over the next 15 years at a 2.75 to 4.5 percent interest rate, depending on the agreed terms.

The appraisal fee is non-negotiable. By federal law, banks must appraise any property before making a loan.

“We would be more than happy to [make loans], but the federal government would come down on us like a pile of bricks if they saw us making a loan without an appraisal,” Kaminski said.

Pittsburgh’s Urban Redevelopment Authority board passed a plan earlier this month to offer low-interest loans for pipe replacement to city residents who make less than 120 percent of the metropolitan area's median income (about $65,000).

Across the state in Philadelphia, where the city is working to remove lead lines (even on private property), the loans are interest free.

URA staff recommended its loan program start with $500,000 in funds. The PWSA estimates that the average loan will be for $6,000. The fund, if it starts at the recommended level, would be enough money to replace roughly 83 lines.

“For some people, it's just an inconvenience, but for people who have no money, they're literally being forced to drink lead and to cook with lead. And, to me, that just seems so barbaric and unjust.”

The EPA has an environmental justice grant program, which has distributed $3 million from 2014 until 2016. However, the grants max out at $30,000 each to organizations that apply — enough to replace only about five lines, by the PWSA’s estimate.

Replacing lines is expensive, but also slow. The most immediate fix is buying the right filter.

PWSA tells customers to find the right filter on the NSF website.

“If you want to see a pile of incomprehensible information, go to that website,” she said.

What you do get on the site is the NSF advising that most filters that can remove lead need to be attached to the faucet, if not added directly to your pipes by a plumber. While faucet filters can be installed without a plumber, some are so large they might not fit in the typical sink. So, there’d be no room to wash dishes or other uses.

The filters also have cartridges that must be replaced over time — and the worse the water quality, the more often they must be replaced. According to the NSF, there is no set service life for the cartridges. The life is usually measured in gallons filtered or months of average use.

Within a week of the stressful evening when Urda learned about her water, she and her husband Nick added filters to their home’s two faucets.

Each cost $50. That doesn’t include the additional $50 for deeper replacement kitchen sink, to accommodate the filter, which was “a hassle” for Nick, Urda’s husband, to put in. The Urdas have replaced the cartridges three times within the first two months. That was another $25. Bridget Urda, 33, spends time with her son, Clayton, at their home in Morningside. Urda sent her lead testing kit to the Pittsburgh Water and Sewer Authority on Aug. 9, 2016. The test would later show her water contained 16.4 parts per billion of lead — 1.4 ppb above the EPA action limit. (Photo by Ryan Loew/PublicSource)

“We’re in a lucky position. We could do that and change our water filters,” Urda said.

As for pitchers, there are fewer options. The typical Brita water pitchers do not get rid of lead. Top filling pitchers that do, like the ZeroWater pitcher, are a bit pricier. Zero Water's smallest pitcher costs $20, while replacements filters are bought in packages starting at $30 for two filters.

To completely avoid lead, the filtered water must be used for drinking, cooking and all other uses where water is ingested.

The city’s $1 million plan, announced by Pittsburgh Mayor Bill Peduto on March 8, is primarily focused on financing lead filters for PWSA customers.  Particularly low-income residents, those with lead levels at or above 10 ppb and in areas where the PWSA will be partially replacing lead lines.

City Spokesman Tim McNulty said the program will include an outreach program to inform people of the filter program. The city has yet to release details on how at-risk homes are being identified, what filters will be used and when filters will be distributed or installed.

Are you a PWSA customer concerned about lead in your water? You can request a free lead testing kit by e-mailing servicelines@pgh2o.com or calling 412-255-2423 between 8 a.m. and 6 p.m. Monday through Friday.

As Gaskin noted from his time in Flint, outreach will be especially critical. Flint, like many American cities, is home to a variety of minority communities. For Flint, that includes Arab-Americans, undocumented immigrants and people with hearing impairment. Each group tends to trust their own communities, churches or neighbors more than the government.

“We no longer have one news source we all go to. Because it was so diverse, you really had to drive neighborhood by neighborhood,” Gaskin said.

And, for example, the United Way spent $25,000 on communicating with the Deaf community because existing communications didn’t use the proper sign language.

If anything good came out of the crisis, Gaskin notes, it’s that having so many private people mobilize for a common goal “brought the community together.”

In Pittsburgh, one of those private groups rising to the challenge is Women for a Healthy Environment [WHE].

With enough money for about 300 filters, WHE is focusing on pregnant women and households with children ages 6 and younger in low-income neighborhoods. Its program gives participating families a water pitcher and enough filters for a year, at a cost of around $50 each to WHE.

She hopes the PWSA will commit to a long-term solution — ideally, replacing every lead pipe in Pittsburgh.

“We’re giving PWSA a little bit of time, but not a whole lot,” she said.

One thought on “Can families, low-income households afford to get lead out of their water?”