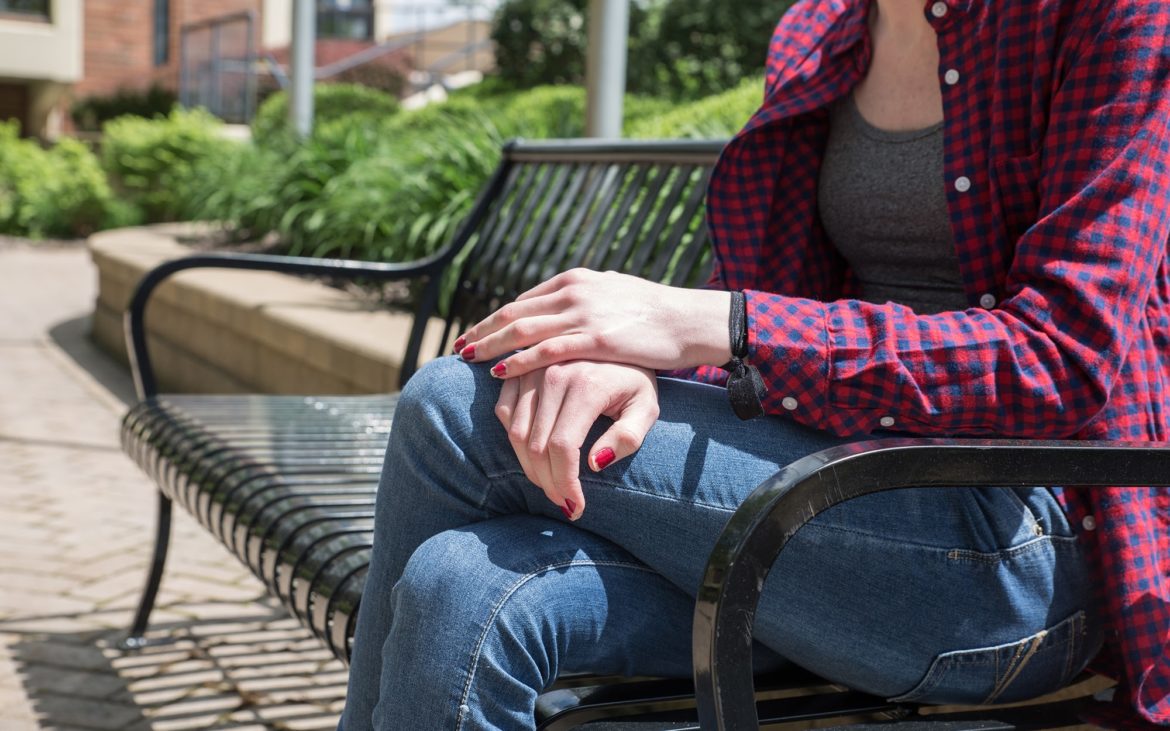 Riley, who asked for her identity to not be revealed for fear of harassment, is part of the transgender community. She believes that the administration of Robert Morris University does not behave in an inclusive way. She also says many of its professors do not use inclusive language or instructional material and that it creates a more hostile environment for her and other diverse students. (Photo by Njaimeh Njie/PublicSource)

Read the Robert Morris University response to this story.

Riley appears to be like every other student on the campus of Robert Morris University. She actually isn’t. Riley deals with obstacles that most students at RMU will never encounter. Riley is transitioning into a woman.

She has asked PublicSource to not reveal her identity because she is afraid of being harassed, threatened or outed to her fellow classmates. During this academic year, while trying to change her birth name to that of a woman, 22-year-old Riley realized that she would often have to take matters into her own hands to ensure her own safety. To those within the transgender community, a name change is one of the first steps to becoming who you really are. Unfortunately for Riley, that process was not as easy as she hoped.

Riley first tried to have administration, faculty and staff recognize her name change this past November. Although she had been informed that the name change could happen, Riley says the process took months for administration to act on the modification. “There are a lot of structure issues where they are reluctant to make accommodations even though they say they [do] on paper,” she said.

For Riley, a situation where her birth name is revealed could be dangerous, inviting harassment from classmates and, overall, making her learning experience uncomfortable and distracting. So, Riley went to the academic affairs office in hopes that they could assist in the process. She was greeted with more pushback. She decided to go to her professors individually, an exhausting process. She even had to use her own email account because using her school email, which contained her birth name, could out Riley just as easily as any professor’s roll call. According to Riley, the administration has been working on creating a preferred name system that is easier, which will be beneficial for future transgender students.

The situations Riley found herself in underlined for her why diversity and inclusion on college campuses are so vital. “Diversity is important because it is already there,” she said. “It is a matter of whether you want to acknowledge it or not. It should be celebrated, not suppressed.”

Students from marginalized groups often find themselves being recruited to universities in order to improve the diversity profile of the college and make their campus “look” diverse. But more often than not, students like Riley often find that once they are on campus, no additional efforts are made to make them feel welcome or comfortable.

PublicSource interviewed five students along with staff and faculty from various universities in and around the Pittsburgh area about the diversity and inclusion efforts on their campuses, specifically the need to promote inclusion after minorities are recruited.

“I would tell administration to not just talk about inclusivity… Go down to talk to students and make sure they are being integrated properly.”

All faculty members claimed they were implementing programs to increase diversity at their campuses. However, the majority of students reported they do not feel included in some, if not all, places on campus. The students’ feelings of being excluded often lead them to believe that the university's diversity efforts are not enough.

Although Riley often found the administration to be unaccommodating, RMU’s Deputy Chief Diversity and Inclusion Officer Anthony Robins said the university is improving its efforts toward inclusion. Robins told PublicSource he hopes to increase diversity among staff.

Still, Riley often feels that trans people are left out of discussions about diversity and inclusion. “I feel overlooked. Even though transwomen are getting more representation in the media, diversity is generally about race and sexual orientation,” she said. “The trans community is not usually on their mind as much.”

Riley is not the only college student in the Pittsburgh area who is concerned with the lack of inclusion on college campuses.

Ellen Sanin is a 20-year-old education major at Duquesne University. As a Washington, D.C., native raised in a diverse city, Ellen explains that coming to Duquesne was a culture shock. Ellen is half Hispanic and identifies as part of the LGBTQ+ community. But because most people don’t readily recognize her ethnicity or orientation, she says she witnesses a lot of the judgments her peers and professors make about minority populations.

She recalled a few incidents with one female classmate. In one interaction, the student argued with her that Spanish students don’t have the same rights as white students. Another time, Ellen says this student spit on the table dedicated to the school’s Gay Straight Alliance group. Ellen Sanin is majoring in education at Duquesne University. She says the aspiring educators are taught how to create an inclusive environment by professors who don't always succeed in doing so. (Photo by Aaron Warnick/PublicSource)

Ellen said she finds that many professors and students make the generalization that everyone in class is straight and the language they use makes it obvious. It’s unfair, she said, but something she’s become accustomed to.

Although the faculty has room for improvement, she said it is the students’ actions that concern her more. Is more diversity in the student body the answer? Ellen thinks if students spend more time with people who have come from different environments, “they won’t have these prejudices and stereotypes.”

The college students we spoke to stated over and over again that there is a need for required diversity training for staff members and students. They believe that this change could potentially teach professors, students and other faculty members how to approach people from various backgrounds. Diversity training can aid one in knowing what’s appropriate to say to certain people and what’s not, thus making minorities feel more included on campus.

Blaine King, a black student at Point Park University, says he does feel comfortable at his college. However, he feels there are always ways for the administration to improve inclusivity. Blaine suggested the administration host more programs and classes centered around diversity to ensure that minorities feel more welcomed. “It will show that the university is moving towards being a very diverse community. That they are willing to learn and teach about [the] aspects of different races…” Blaine said.

At Point Park University, Keith Paylo, the vice president of Student Affairs and dean of students, said staff members have had access to diversity training called “Safe Zone.” Although this training encourages a safe environment for those in the LGBTQ+ community, it does not focus on other marginalized groups that involve race or religion.

The University of Pittsburgh is also attempting to build upon its inclusion efforts, which includes optional diversity training for staff and faculty. Pitt designated the 2016-17 school year its “Year of Diversity,” an effort to incorporate a new foundation of programs that will aid in teaching faculty about creating a safe environment for students.

“I feel like if minorities were to see more black faculty and gay faculty, they’ll feel more comfortable in that class."

Pitt instructor Anupama Jain is the founder and principal consultant at Inclusant, a business that teaches clients and organizations about how they can be inclusive and culturally competent. She said students from the minority community often report experiencing microaggressions on campus. As an instructor of gender, sexuality and women’s studies, she said she hears from a lot of students who identify as not normative or not gender binary. “They report feeling invisible to their peers and their professors.”

At RMU, Riley said some professors even use outdated and offensive textbooks, such as a textbook entitled “Deviant Behavior,” used in a class by the same name, which describes trans people in a way she finds offensive. “It’s teaching them that we aren’t normal people,” she said.

Actions and attitudes of professors can set the tone on campus. Jain says: “If I’m teaching about gender and race equality, I’m not expecting [students] to come with that information. But to have my colleagues not have that information, to not be educated or culturally competent...” she trailed off with concern in her eyes.

Destiny Diess, a white freshman who works with Jain, says one apparent problem is the lack of diversity among the staff, similar to problems described by Riley and other students. “I feel like if minorities were to see more black faculty and gay faculty, they’ll feel more comfortable in that class,” she said.

However, she doesn’t think this concept would be widely accepted on the University of Pittsburgh campus. “I went to a leadership seminar and it was mostly about white privilege,” she said. “A lot of people were very uncomfortable talking about it even though they were seen as leaders.”

When you’re hesitant to study in the library or get lunch in the cafeteria, for fear of harassment, is that an inclusive campus? Are your programs and training working? Riley, a rising senior at Robert Morris University, talked to PublicSource about her struggle to get her name changed by the school administration from her male birth name to a female chosen name. (Photo by Njaimeh Njie/PublicSource)

Riley wonders this each day as she works toward a degree in business marketing. Despite the concerns, she and other students alike spoke optimistically about their journeys to increase inclusion on campus, remaining aware of the amount of work that must be done by their peers and their respective schools’ administrations.

“I would tell administration to not just talk about inclusivity…” Riley said. “Go down to talk to students and make sure they are being integrated properly.”

Maia Ervin is a PublicSource intern. She can be reached at maia@publicsource.org.

One thought on “Campuses in the Pittsburgh area: Diverse? Maybe. Inclusive? Not so much.”