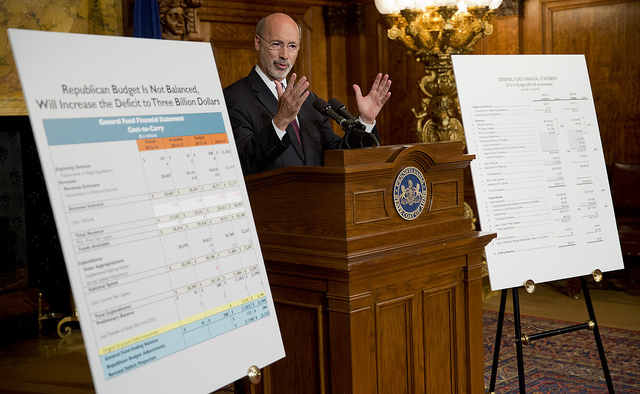 After vetoing the Republican-passed budget on Tuesday, Gov. Tom Wolf said today that negotiations will resume next week as the governor and Republican lawmakers seek to blend their two budget proposals.

Wolf was the first Pennsylvania governor in 40 years to veto an entire budget.

Speaking to Paul Guggenheimer on WESA’s Essential Pittsburgh show, Wolf said his veto marked a beginning to the budget negotiations.

The job now is to bring those two points together because — whether we like it or not — Pennsylvanians voted for divided government and we both have to agree in the end.

Wolf met with members of the Legislature Wednesday afternoon and they will meet again Monday morning.

He mentioned the “drama and theatrics” of the past few days, which has focused less on policy as each party blamed the other before the June 30 deadline, as illustrated by this PennLive editorial cartoon.

PublicSource reported on the proposed tax changes by both parties and created a tax calculator to analyze how those changes would affect residents in Allegheny County. Both parties proposed different plans for raising the state’s sales tax and income tax while cutting property taxes. However, none of those changes were included in the budget that Wolf vetoed.

Wolf talked about the need for more tax money on Essential Pittsburgh:

Wolf also proposed a 5 percent severance tax on the value of natural gas extracted at the wellhead plus 4.7 cents per thousand cubic feet of gas extracted.

Wolf said on Essential Pittsburgh that he’s willing to negotiate on the details of his proposals if someone finds a flaw in it. As an example, he said he removed the floor from his proposed severance tax plan because the tax would become very high if natural gas prices were below the floor.

In a statement from the governor, he said:

This legislation falls short of a responsible means to reform our state liquor system and to maximize revenues to benefit our citizens. It makes bad business sense for the Commonwealth and consumers to sell off an asset, especially before maximizing its value. During consideration of this legislation, it became abundantly clear that this plan would result in higher prices for consumers.