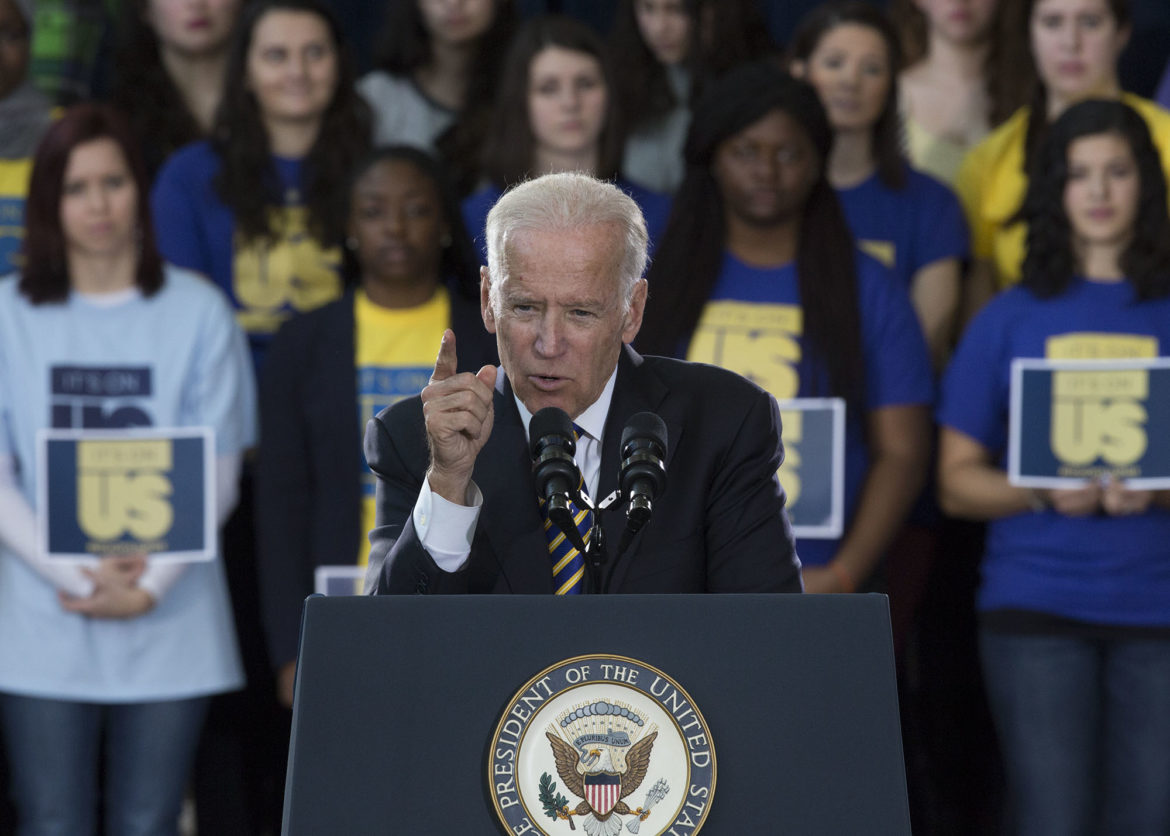 Marla was a New York City-based model who received unwanted attention from her landlord. Desiring to move out of her apartment, she met her landlord at a public place — a bar — and, forced to spurn his advances again, she walked out.

When she got outside, she was attacked by two of the landlord’s thugs, who cut up her face with knives.

Marla’s story was just one shared by Vice President Joe Biden at the University of Pittsburgh on Tuesday.

Biden, along with Gov. Tom Wolf and Pittsburgh Mayor Bill Peduto, took the opportunity to speak to thousands of students, faculty, staff and the public about a “culture problem” in the United States.

As part of an Obama administration awareness and advocacy campaign called It’s On Us, launched nationally in 2014, Biden shared stories of domestic violence, sexual assault and rape, and urged the people in attendance to take the pledge of consent.

“The abuse of women and boys and men have” serious repercussions, Biden said. “If consent is not given, it is a crime.”

More than 500,000 individuals and 500 campuses nationwide have taken the pledge, according to the U.S. Department of Education Under Secretary Ted Mitchell, who also spoke at the event.

One statistic was frequently cited: One out of every five women on college campuses will experience sexual assault.

Bonner said college students face many hardships, but that “dealing with the horrors of sexual assault… should not be one of these challenges.”

Wolf added another statistic: 20 percent of girls between 14 and 17 are assaulted by trusted people — their friends or relatives.

Wolf reminded the audience that in January, Pennsylvania was the first to adopt a statewide ‘It’s on Us’ initiative, which seeks to accomplish three things: to improve awareness and prevention of campus assault, to remove and reduce barriers for reporting, and to demonstrate a willingness to “scourge” rape culture and “treat it like the problem it is.”

“Sexual assault has an effect on all of us,” Wolf said.

Survivors are more likely to experience short- and long-term health problems, including post-traumatic stress disorder, depression and suicidal thoughts. Survivors of assault are also considerably more likely to drop out of college.

“It’s a violation of the civil right of safety,” Wolf concluded.

Peduto noted that many survivors struggle with their trauma because they feel ashamed of telling others. He reiterated Biden’s main message that sexual assault is not just a “women’s issue, it’s a society issue.”

Last year, Pitt circulated the 2015 Campus Climate Survey on Sexual Assault and Sexual Misconduct. Since then, the university has implemented several initiatives, including training modules on sexual assault, establishing a student task force and developing the Sexual Harassment and Assault Response and Education [SHARE] program.

“One sexual assault is too many,” said Gallagher, the university chancellor. “One every 107 seconds is a national tragedy.”

When Biden took the stage, he opened with the scenario of parents dropping their child off to college.

“Every one of your parents, when they dropped you off… had a nagging feeling. Will you be all right?” Biden said. “That fear is real. For too many parents, that fear has been realized or will be.”

Although Pennsylvania now has more than 50 rape crisis centers, Biden said that, in the past, conservatives called them “indoctrination centers.”

The toxic culture Biden spoke of insinuated that women were at fault if they were assaulted because of what they were wearing, drinking or saying.

According to Biden, domestic violence, which used to be regarded as a “family matter,” has declined 64 percent in 20 years.

“More women are reporting now because they’re less afraid of being raped by the system,” he said. But the numbers of assaults are not decreasing, he continued. The numbers are stagnating.

He emphasized that the importance of the campaign is to make it clear that everyone has an obligation. Biden implored the audience not to be complicit. He read the ‘It’s On Us’ pledge, and the audience repeated it back to him.

“Are you doing enough to change the culture that asks the wrong questions?” Biden said.