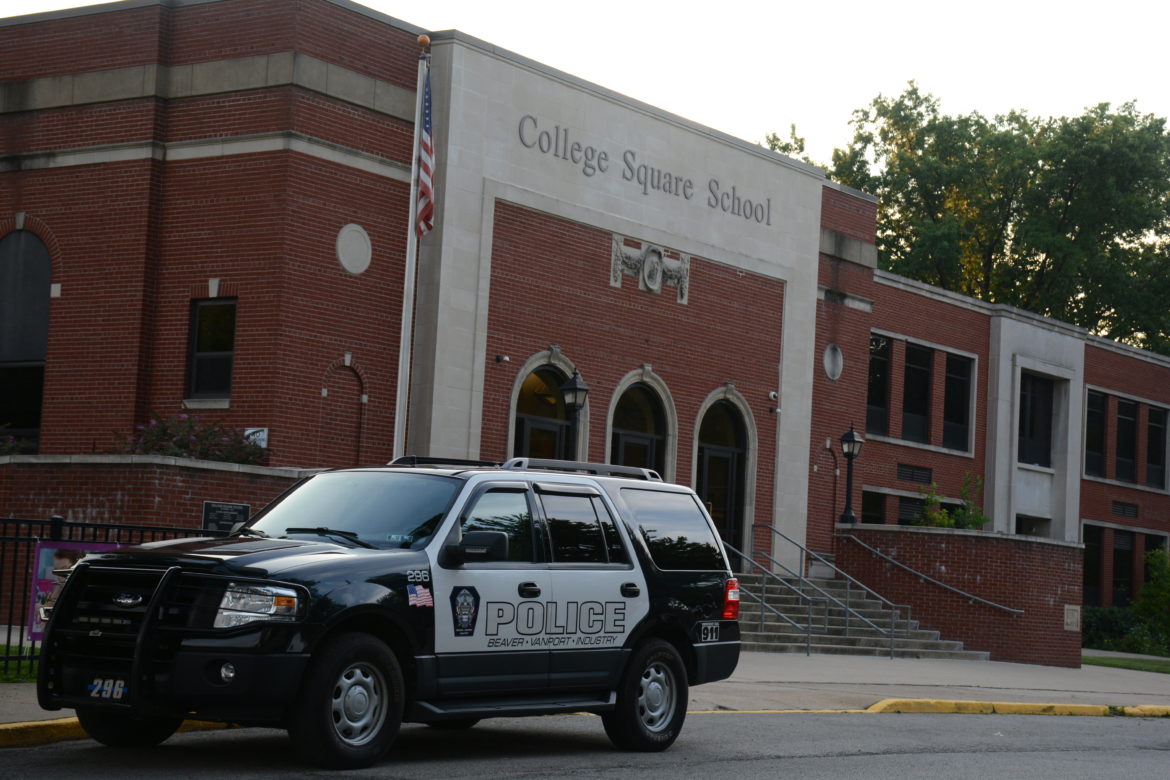 Four uniformed police officers sat in on the Aug. 1 community meeting, along with more than 100 locals, at the College Square Elementary School to discuss the Shell petrochemical plant. (Photo by Stephen Caruso/PublicSource)

More than 100 concerned residents of Beaver County attended a community meeting hosted by Royal Dutch Shell in the town of Beaver Tuesday night, hoping to get their questions answered about the potential environmental impact of the $6 billion cracker plant being built in their community. But some left with the feeling that their queries were unanswered.

The meeting, the third planned by Shell, was held in the College Square Elementary School and opened with an hourlong presentation by company employees. Beaver residents Debbie and Rick Pentz attended the meeting with their granddaughter Alayna, hoping for answers, but found the meeting to be less informative than anticipated.

Debbie Pentz had come prepared with a list of questions, including some inspired by PublicSource’s recent reporting on fenceline monitoring of pollutants entering the community. But Rick complained that the replies seemed scripted and superficial, and Debbie said she couldn’t hear what other attendees were asking or the answers. This was due, in part, to how Shell set up the meeting; instead of an open question-and-answer session, they funnelled the crowd to tables organized by topic to talk with Shell representatives.

“The reason we structured it like this was to give people a one-on-one opportunity to have their question answered,” said Joe Minnitte, an external relations advisor for Shell.

In the broader presentation, company representatives dropped references to the Steelers and local hospitality while discussing Shell’s community outreach and safety and environmental preparations for the petrochemical plant. Once operational, the plant will convert natural gas into plastics.

The plant is expected to produce hundreds of tons of potential hazardous pollutants into the atmosphere. There was no recording or photography allowed during an Aug. 1 community meeting in Beaver about the upcoming Shell petrochemical plant. Shell representatives said the rule was put in place to create a more open environment for citizens to share their concerns. (Photo by Stephen Caruso/PublicSource)

Despite the congenial presentation, most people in attendance remained worried about possible air pollution from the plant and much more.

What happens if there’s a major accident or explosion? Will citizens be compensated for property damage or medical problems? How many outsiders are moving in?

Juliann Petersen, a local healthcare worker who attended the meeting, was frustrated after Shell’s presentation.

While the presentation was forthcoming on Shell’s efforts to plant trees and lay down mulch in a local playground, Petersen felt she didn't get satisfactory responses when she asked about Shell’s air permit. The permit covers a swath of Western Pennsylvania, but she’s concerned about the hyperlocal effect on the borough of Beaver, particularly the health risks for the locals.

“It was a public relations meeting,” Petersen said. “My questions did not get answers.”

While the meeting was open to the public, no recording or photograpy were allowed.

A few attendees came to the event as members of the Beaver County Marcellus Awareness Committee, including Terrie Baumgardner, an instructor at Penn State’s Beaver County campus. She joined the group in 2011, when it mostly opposed fracking. Now, the group has been focusing on the cracker plant.

“The cracker is going to justify fracking to Wall Street,” Baumgardner said. She fears the plant’s 1.6 million tons of plastic production, produced from unconventional gas wells in and around Western Pennsylvania, will encourage further investment in the petrochemical industry in the region — and further environmental degradation.

“It was a public relations meeting. My questions did not get answers.”

Jim Sewell, the cracker plant’s environmental director, spoke to the crowd during the presentation. Sewell said the plant is required by its DEP permit to utilize the best technology to achieve the strictest emissions standards.

While there are safeguards in place, like Shell’s leak detection and repair program, some environmentalists are arguing it’s not enough. Some environmentalists are pushing for real-time fenceline monitoring that is used at other industrial facilities across the country and provides information about the air quality passing from the plant’s property into the community.

Shell told PublicSource for a July story that it is open to considering the installation of fenceline monitoring at the plant, but the company hasn’t committed to it.

While some attendees were categorically opposed to the cracker, Robert Boles made clear he had no philosophical issues with the plant. Boles, an engineer, volunteer firefighter, and father of four, just had one request — that Shell take a baseline measurement of everything from air quality to light pollution to ambient noise. That way, if citizens complain to the company about anything from a funny smell to loud noises keeping them up at night, there would be some data for a fair comparison.

He brought up that concern to a Shell representative, but held back from asking if the company had a plan in case of a disastrous accident at the plant. With the size of the crowd vying for personal attention, he didn’t feel that asking would be worthwhile.

“It felt like [the meeting] was structured to avoid tough questions,” Boles said.

Stephen Caruso is a journalist based in Pittsburgh. He can be reached at stephen@publicsource.org. Follow him on twitter @StephenJ_Caruso.