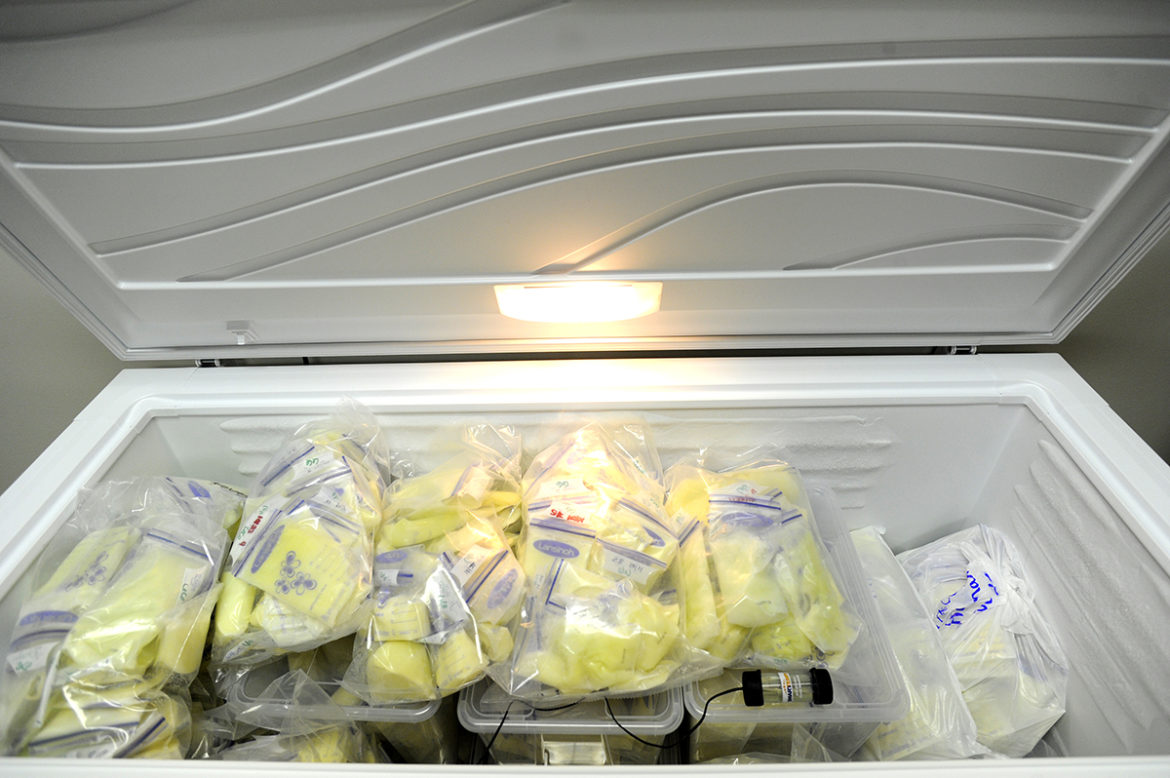 When Elizabeth Janci’s son, Rudy, was born in a Pittsburgh hospital in 2011, he spent seven days in the NICU, where she says nurses discouraged her from breastfeeding.

“As a first-time mom, I was just flailing,” Janci said.

The nurses implored Janci to pump and feed her son breast milk from a bottle, claiming this was necessary to measure his meals. Later, she learned they could have done this by weighing the baby before and after he nursed.

“That made it so he was used to the bottle nipple and bottle flow before we had any kind of breastfeeding relationship established,” she said.

Although Janci went on to successfully breastfeed, a federal health survey found that only 15 percent of Pennsylvania mothers breastfed without supplementing with formula until their babies were six months old, as the American Academy of Pediatrics recommends.

And with Pennsylvania's breastfeeding rates below the national average — when the United States already lags behind other developed countries — the state stepped in one year ago by establishing the Keystone 10.

Of 102 eligible facilities in Pennsylvania, 69 hospitals and birthing centers signed on to the initiative, signaling that over an estimated three to five years they'll implement procedures that encourage successful breastfeeding.

Because many new moms may be the first in their families to attempt to breastfeed for generations and often lack knowledge and support, all while experiencing societal and workplace pressures, medical professionals say too few infants are reaping the lifelong health benefits of breastfeeding.

In addition to the Keystone 10, advocates are championing a bill that would ensure all women — both wage workers and salaried professionals — have accommodations to pump at work.

“Breastfeeding is not just a lifestyle choice for a mom; it’s actually a very critical decision for the infant,” said Dr. Jennifer Zarit, interim medical director at the Breastfeeding Center of Pittsburgh, which offers lactation consulting and classes.

When her daughter, Lucy, was born in 2004, Angel Vogel didn’t know she had to pump her milk regularly to continue to produce it.

By the time she realized her mistake, her supply had nearly disappeared. Vogel, a nurse from Baldwin, spent five months trying to cultivate a breastfeeding relationship with her daughter before giving up. Angel Vogel watches her daughter, Lucy, play in their Baldwin home. Vogel had difficulty breastfeeding Lucy, who is now 11 years old, but she was able to breastfeed her younger son, Sam, with guidance from La Leche League. (Photo by Connor Mulvaney/PublicSource)

Now, Vogel is a leader at the South Hills chapter of La Leche League International, an organization that educates moms who want to breastfeed.

According to the most recent data available from the Centers for Disease Control and Prevention, 73 percent of infants born in 2011 in Pennsylvania breastfed at least once, compared to 79 percent in the United States.

We live in a “bottle-feeding culture,” and breastfeeding can be a strange concept to some, said Mary Unfar, a lactation consultant with the Allegheny County Health Department’s WIC (Women, Infants and Children) program.

When WIC displayed a photo of Beyoncé nursing in its office, “that did more for breastfeeding than what we could have done for probably six years,” said Diane Eberle, the WIC program’s public health nutrition administrator.

Without targeted intervention and education efforts, families that have been choosing formula over breastfeeding for generations will continue to do so.

“It’s intense to learn how to breastfeed,”  said Dr. Loren Robinson, deputy secretary for health promotion and disease prevention at the Pennsylvania Department of Health. “You’ll see commercials on TV about [formula]... and it’s a lot easier to buy the formula…than to put this angst and energy and time into breastfeeding.”

Tanya Sloan’s, daughter, Ella, struggled to latch onto her breast after coming home from the hospital in December. Until five weeks later, the baby preferred the bottle because of her trouble latching.

“I felt heartbroken, I felt rejected,” Sloan, of Highland Park, said. “I cried a lot.”

With help from support systems like La Leche League, Sloan was able to nurse her daughter at the breast before returning to work. Now, she’s pumping during work and breastfeeding Ella whenever the two are together.

The Centers for Disease Control and Prevention encourages new moms to breastfeed except in rare situations, like if they have HIV or are using drugs.

However, breastfeeding can be more challenging or impossible for some women.

A condition that affects about 1 to 5 percent of women prevents some mothers from being able to produce enough milk for a baby. Other health issues, like hormonal imbalances or a history of breast reduction or radiation, can also make breastfeeding problematic, Dr. Jill Demirci, a lactation consultant at the Children's Hospital of Pittsburgh, wrote in an email.

Infants breastfed at least once in their life A 2013 voluntary CDC survey on infant feeding care processes found only 29 percent of participating Pennsylvania birthing facilities were adhering to guidelines “against routine supplementation with formula, glucose water, or water.”

That includes helping mothers initiate breastfeeding within an hour of birth and encouraging the mother and baby to stay together 24 hours a day.

If a mom initially has a low milk supply, Bogen said, the doctor can suggest obtaining donor breast milk, which Pittsburgh’s Three Rivers Mothers’ Milk Bank began providing to NICU babies in January. This communicates the importance of breast milk.

Lea Walls, the clinical director of Uniontown Hospital’s Family Beginnings Birthing Center, which is implementing the Keystone 10, said some of the initiative’s tenets—such as the stipulation that babies not receive formula unless medically indicated—can be divisive.

“People say... ‘Don’t make me feel like I was a bad mother because I went to formula,’” she said. “Some people feel that [breastfeeding] is just being forced on them.”

Some believe the benefits of breast milk have been overstated. A 2014 study that included siblings with one who was breastfed and the other who received formula found indicators of health and well-being may be attributable to upbringing rather than nursing. The two populations showed little or no difference in categories like math skills, hyperactivity and obesity.

Uniontown Hospital is preparing to submit data for nine of the 10 steps for approval, Walls said. The final step is especially challenging: fostering the establishment of breastfeeding support groups and referring mothers to them. The hospital will likely have to start its own because there are no existing groups in the area, she said.

Everyone at the hospital has had to change their habits.

"Not just nurses — doctors, anesthesiologists, the patients, the patient’s family,” Walls said. “Because we've gone out of the breastfeeding mode, where grandma, mom and everybody did. And now these patients are pioneers sometimes."

In Allegheny County in 2012, the health department reported about 55 percent of new black mothers initiated breastfeeding, while 74 percent of their white counterparts did.

That could have an influence on the higher rate of infant mortality among blacks in Allegheny County. Demirci said breastfeeding directly reduces the risk of two large contributors to infant mortality: SIDS and complications associated with premature delivery.

Paige Beauchemin, who took 12 weeks of partially paid leave when her first baby, Gus, was born in 2012, said she can’t imagine how tough it is for new moms to return to work earlier than that.

She pumps for her baby daughter, Ruth, during her job at the Midwife Center for Birth & Women’s Health in Pittsburgh, a workplace that’s especially friendly to employees’ pregnancy and child-rearing needs.

Pennsylvania does not do enough to protect moms who are working and breastfeeding, said Amal Bass, a staff attorney with the nonprofit Women’s Law Project based in Philadelphia and Pittsburgh. Paige Beauchemin, a nurse at the Midwife Center for Birth & Women’s Health in Pittsburgh, looks at pictures of her children while pumping breast milk at work for her 1-year-old daughter, Ruth. Seeing their kids can help mothers pump breast milk, she said. (Photo by Connor Mulvaney/PublicSource)

While federal law requires employers with more than 50 employees to provide hourly workers with break time to pump their milk, many salaried women are not protected.

Even though Pennsylvania factory worker Bobbi Bockoras should have been covered under the federal law, she filed a lawsuit in 2013 because she was expected to breastfeed in unsanitary areas, including an old locker room with dead bugs covering the floor. The lawsuit was settled out of court in 2014.

Bass has advocated for a Pennsylvania bill that, if passed, would ensure that all women have a sanitary, private place to pump that is not a bathroom. All employers would be required to accommodate breastfeeding moms, including salaried workers not currently protected under federal law — unless it would mean “undue hardship” for small employers.

Opponents in the business community argued at an October House committee hearing that the proposed legislation opens businesses up to frivolous lawsuits.

Federal law guarantees 12 weeks of unpaid maternity leave to women who have worked at least 12 months and 1,250 hours for larger companies. Others are forced to cobble together other types of time off to stay with their babies.

Many other advanced countries offer paid maternity leave; mothers are offered 39 weeks in the United Kingdom.

The only breastfeeding law in Pennsylvania protects a woman’s right to breastfeed in any public or private location where they have the right to be.

In contrast, California has a spate of laws associated with breastfeeding that include requiring the Department of Public Health to promote breastfeeding and mandating employers provide time and space for employees to pump breast milk.

There, 93 percent of babies were breastfed at least once in 2011, a figure that towers over Pennsylvania’s 73 percent.

“People aren’t different in California than they are in Pennsylvania; it’s the systems in place and the culture that’s different,” Bogen said. “If the whole community doesn’t think it’s important, it doesn’t happen.”