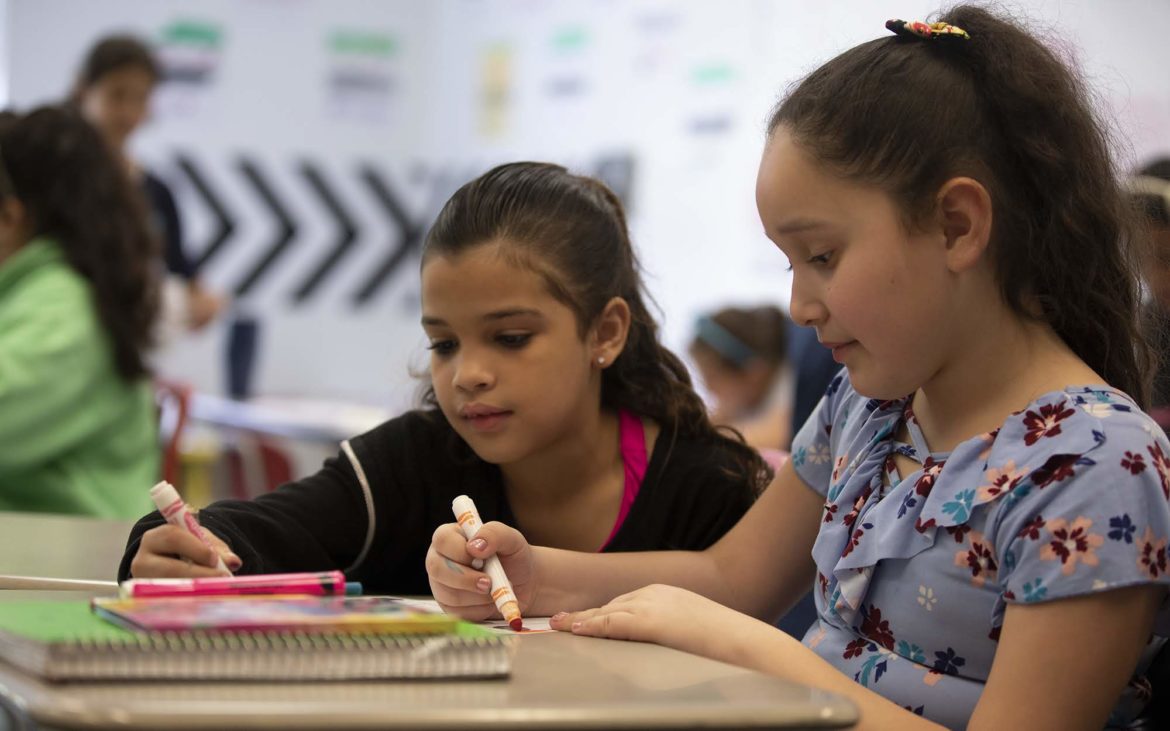 Gabriela Delgado- Rodriguez (right) and Neroliz Velez-Mercado (left), both from Puerto Rico, work on a behavior chart together in their ESL class at Duquesne City School District. (Photo by Kat Procyk/PublicSource)

Two years ago, the Duquesne City School District had no students designated as English language learners. Now, about 10 percent of the nearly 400 students in the district require English as Second Language [ESL] services. The district serves students in Pre-K through sixth grade.

Related: A crossroads of languages: How Pittsburgh schools respond to a growing ESL population.

Similarly, the Carlynton School District saw a fivefold increase in its ESL population in the past five years. For the 2018-19 school year, district officials said the school had 98 ESL students.

These increases are among the most dramatic in Allegheny County. But they are indicative of a trend — ESL enrollment has steadily increased in the county’s public school districts.

Pittsburgh Public Schools saw an 85 percent ESL enrollment increase since 2007. In the past five years, the county’s 42 districts outside the city saw, on average, a 70 percent rise in ESL enrollment. ESL enrollment in those districts reached about 1,700 students in the fall, according to October numbers from the Pennsylvania Department of Education.

Pittsburgh has created a system of a dozen schools that serve as ESL centers and, with prodding from the Education Law Center, provided a myriad of translation services for ESL students and families. District teachers have also worked to transition ESL students to regular classrooms. But smaller districts struggle to afford the costs of hiring staff to meet the needs of growing ESL populations.

Duquesne and Carlynton officials both cite the cost of providing ESL instruction as contributing factors to budget deficits this year.

School officials say the availability of housing in a district’s borders influences the size of the student refugee population.

In Duquesne, families have been settled by placement agencies at the Hilltop/Parkview Manor Apartments. In Carlynton, many of the refugee families reside in the Beechwood Apartments in Carnegie.

Most of the Duquesne’s ESL students arrived after the state data was collected for the year, according to Superintendent Sue Moyer.

The district started the school year with five Spanish-speaking students in need of ESL services. By spring there were 41 ESL students, mostly from Syria, with one student from Somalia and one student from Turkey, according to Moyer.

She said international students have been welcomed by their peers in Duquesne. “The beauty of kids this age, the kids are genuinely interested in each other,” Moyer said.

The influx, however, has created a financial strain on the district. Duquesne budgeted $45,000 for ESL services for 2018-19. But the district spent $130,000 contracting with the Allegheny Intermediate Unit (AIU) for one full-time and one part-time ESL teacher. The AIU provides ESL, special education and other services to public schools in Allegheny County.

Moyer said the district can’t afford to continue to pay the AIU so a Duquesne teacher is being trained to provide ESL services.

Chartiers Valley and Brentwood both saw significant increases in their ESL population, according to school officials. In Chartiers Valley, ESL enrollment rose from 62 to 147 students in the past five years. Over that period, Brentwood saw an increase from 17 to 95 ESL students. 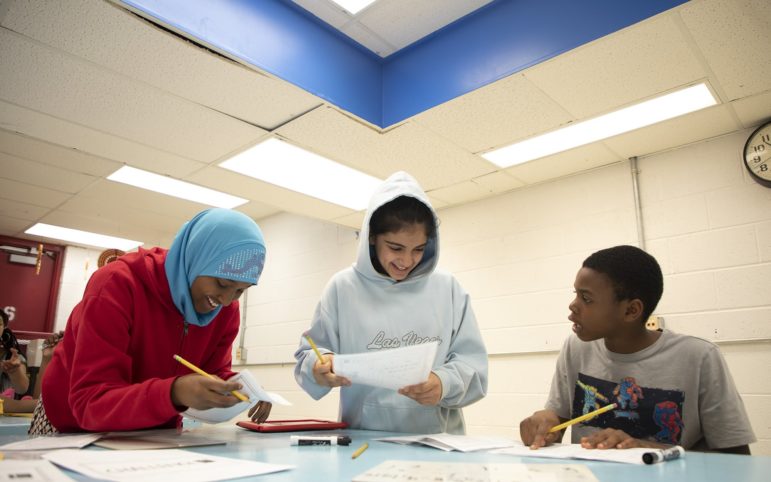 Ayan Nur of Somalia (left), Jannat Al Imari of Iraq (center), and Vincent Huff of Duquesne work together on a problem in their sixth-grade math class. Nur and Imari met in an ESL class and have been close friends since. (Photo by Kat Procyk/PublicSource)

The Baldwin-Whitehall School District had 315 ESL students last fall, the largest population in the county, outside Pittsburgh. Baldwin-Whitehall’s influx of refugee students started in the late 1990s when placement agencies such as Catholic Charities moved families into the Whitehall Place apartment complex.

Charter schools in Allegheny County have not seen significant enrollment of ESL students, according to state data. In 2018-19, Young Scholars of Western Pennsylvania Charter School had 18 ESL students, the most of any charter school in the county. But that figure decreased from an ESL enrollment of 28 students  in the 2014-15 school year. The next highest enrollment was at City Charter High School, which had six ESL students in 2019-19, an increase from one student compared to five years ago.

Twelve of the county’s 22 charter schools reported having no ESL students.

As in the Pittsburgh Public Schools, the influx of students in some suburban districts has prompted changes. Districts offer vegetarian options in school cafeterias, provide spaces for prayer time and fasting and hire translators and translation services.

It’s also prompted explorations of the various cultures represented by the ESL students and cultural awareness training for school staff.

Duquesne used grant money to hire trainers from the University of Pittsburgh’s Center for Urban Education to train staff on cultural sensitivity and relevance.

In Carlynton, school officials have brought in extra mental health counselors to help students deal with any trauma or post traumatic stress they may be experiencing from their refugee experience.

“Whatever our needs are, we’ll figure it out, and we’ll do it,” Andler said.

This story was fact-checked by Varshini Chellapilla.

This project has been made possible with the generous support of The Grable Foundation.