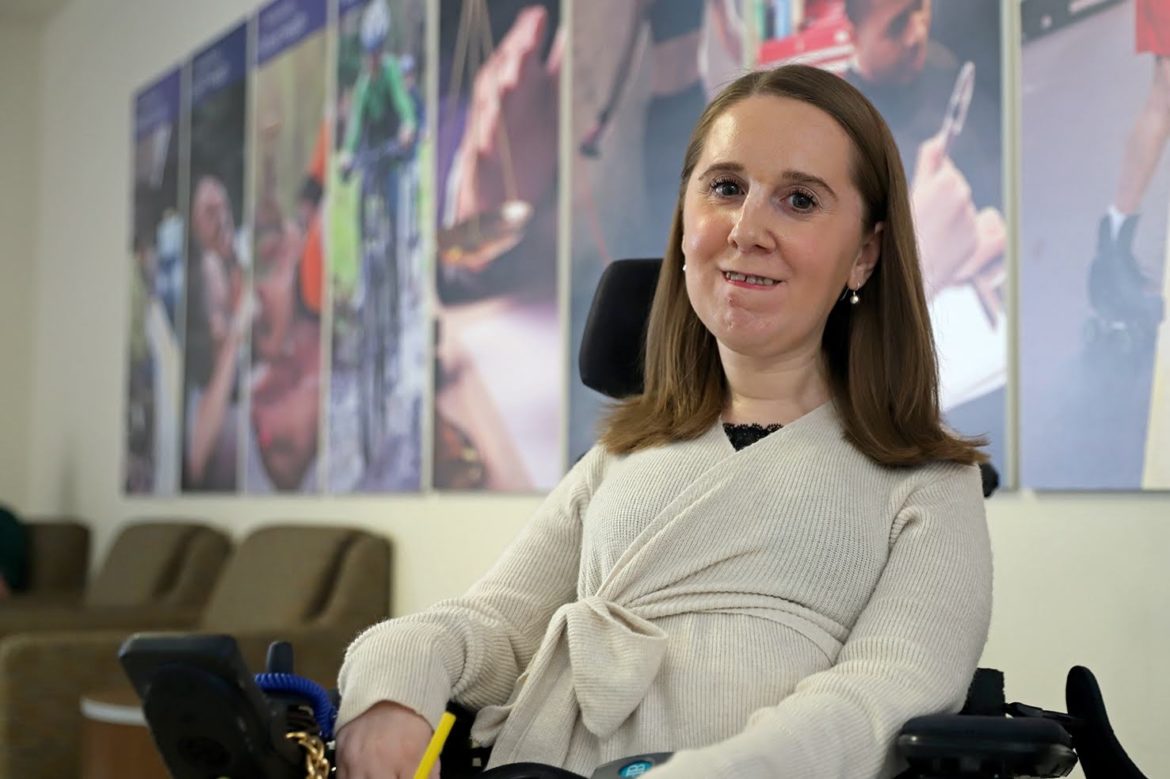 Heather Tomko in the lobby of the University of Pittsburgh's Graduate School of Public Health. Tomko is a researcher at the school and an advocate for disability rights. (Photo by Jay Manning/PublicSource)

For most people, waking up and getting ready for work is a fairly straightforward routine. You get up, probably drink some coffee, take a shower, get dressed and head out the door. I’d guess it takes you about an hour, maybe two hours at the most?

For me, my morning routine is anything but straightforward. I have spinal muscular atrophy, a neuromuscular disease, and it means that I need help with each and every one of these steps. I rely on personal care attendants [PCAs] to assist me with all of these routine tasks.

Getting out of bed and adjusted in my wheelchair can take 10 or 15 minutes alone. Even a “quick” shower is 30 minutes, minimum. I constantly plan on things taking longer than I think they will and have to schedule out every step of my morning. I typically wake up a little before 5:30 a.m. to leave the house by 9 a.m.

While my routine may be more involved than most, the outcome is still the same — after I’m done getting ready, I go to work. I’m a research coordinator at the University of Pittsburgh, in the Graduate School of Public Health. I have insurance through work, but I’m aware of no insurance that covers “long-term support services” offered by nurses or PCAs. So I am enrolled in a state-based Home and Community-Based Services [HCBS] waiver to cover these costs.

Normally, these HCBS waivers have incredibly low income and asset levels, meaning if you earn — or even having a savings account — above these levels, you can become ineligible for the program and the state will no longer pay for your care.

My salary actually makes me ineligible for an HCBS waiver, but under something called Medical Assistance for Workers with Disabilities [MAWD], I can keep my job and maintain my eligibility for services by paying slightly under $100 into Medical Assistance each month. That's just like you’d pay a monthly premium for any other insurance. But if my pay increased past the eligibility cap of $62,000, I’d lose my access to the waiver.

In other words, if I were to earn a modest raise, I’d have to pay for crucial services out of pocket, which I absolutely can’t afford.

I realize that $62,000 is not a small number. But let’s take a moment to do some back-of-the-envelope math. The number of PCA hours I get a month depends on my living situation. I currently live at home and do get some assistance from family because it can be very difficult to find PCAs to consistently work the hours that I need each week. PCAs generally make between $10 and $12 an hour, and finding people willing to work for these wages long term, can be challenging.

The services are not a luxury — they’re necessary for me to get out of bed and out the door. When you look at these numbers, it’s easy to see that a salary limit of $62,000 is not that high at all. If I had to pay out of pocket for PCA services, I may have to spend my entire salary on these costs, leaving nothing for food, rent, clothing and the rest of my life.

This salary cap forces me to decide between my job and my health — a decision that really isn’t a choice at all. If I want to apply to a job, I have to look not only at the lower limit of a salary range, but the upper one, too. If I lost my services, I’d end up losing my job, too, as I can’t get to work without those services. I’d be right back where I started.

The United Way’s #IWantToWork campaign — a social media project centered on ensuring people with disabilities have access to employment opportunities and fair wages — is tackling the issue of this salary cap by pushing for lawmakers to eliminate it. They’ve worked with state representatives to have bills introduced in the House and Senate and continue to raise awareness of the importance of this issue with an online petition.

I’m not the only one facing this challenge. Leah Gray, the deputy director for Disabilities Options Network, also relies on MAWD, which provides insurance coverage for her and her child. She can’t risk losing it.

“The earnings cliff has meant the difference between being able to take a higher-paying job and having to pay for the expensive benefits package through my employer, or stay at a lower paying position and continue to receive MAWD,” Gray said.

Without these services, I have no job, no independence, no social life at all — I’m stuck, in every sense of the word.

Josie Badger has a doctorate in healthcare ethics and works as a consultant. She is another MAWD enrollee who relies on waiver services. On a daily basis, she uses a power wheelchair and a ventilator, and has 24-hour care that’s a mix of nurses and personal care attendants.

“They provide support with hygiene, with cooking, with eating, with transferring from my wheelchair, using the restroom, with transportation wherever I need to go,” she said. “So they are my hands and legs for everything that I do.”

Annually, her care covered by MAWD and waiver services costs about $250,000. She would not be able to live the life she leads without it.

“For my life, that would mean I would need to probably move back into my parent’s house or into an institution,” Badger said. “It would prevent me from working, prevent me from living in the home that I own, and would control my entire life.”

Badger is one of the voices behind the #IWantToWork campaign and advocating for the removal of the earnings cliff. Already, several states have removed or increased these asset and earnings limits for people with disabilities. She wants to add Pennsylvania to the list.

According to Badger, a bill addressing the concerns would eventually eliminate the income and asset limits and ensure that any limits only apply to the person with the disability receiving the services, rather than to the entire household. 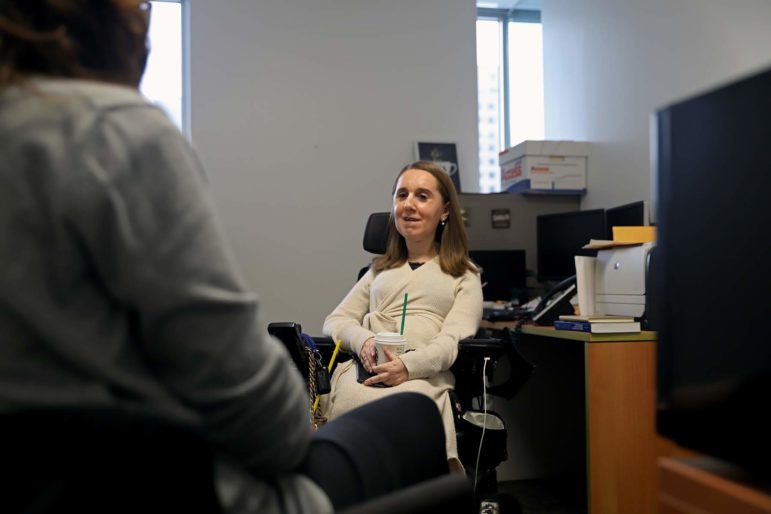 Heather Tomko speaks with a graduate student in her office at the University of Pittsburgh's Graduate School of Public Health. (Photo by Jay Manning/PublicSource)

Heather Sedlacko, the director of programs for seniors and people with disabilities for the United Way of Southwestern Pennsylvania, said the orgainization’s role in this effort is “providing the backbone support to advise, lobby, and provide resources to amplify the voices of self-advocates behind the #IWantToWork campaign.”

Their efforts have helped lead to proposed legislation, with bipartisan support, to raise the MAWD income and salary limits and help people with disabilities reach their full potential. The prime sponsor of the state Senate version of the bill is Sen. Bob Mensch, R-Montgomery. In the House, the prime sponsors are Rep. Kate Klunk, R-York, and Rep. Dan Frankel, D-Allegheny. While the lawmakers have opposing views on many political issues, they agree about this.

The United Way is hoping to collect 2,000 signatures on a petition, which will then be shared with lawmakers in Harrisburg to help them see the support behind the proposed bill.

As Gray stated, “Raising the cap would make a big difference to people holding themselves back.”

Until these limits are removed, I’m constantly being asked to choose between my career and my health. My morning routine looks a lot different if I’m forced to lose my services because of my job. There is no morning routine if you can’t get out of bed by yourself.

Without these services, I have no job, no independence, no social life at all — I’m stuck, in every sense of the word. But even with these services, with the salary cap as it stands, I’m also stuck from really moving forward. So unless we make these changes, I can’t win no matter what I choose.

Heather Tomko is a public health researcher and the founder of Accessible YOUniverse (www.accessibleyouniverse.org). She can be reached at heather.tomko@gmail.com.