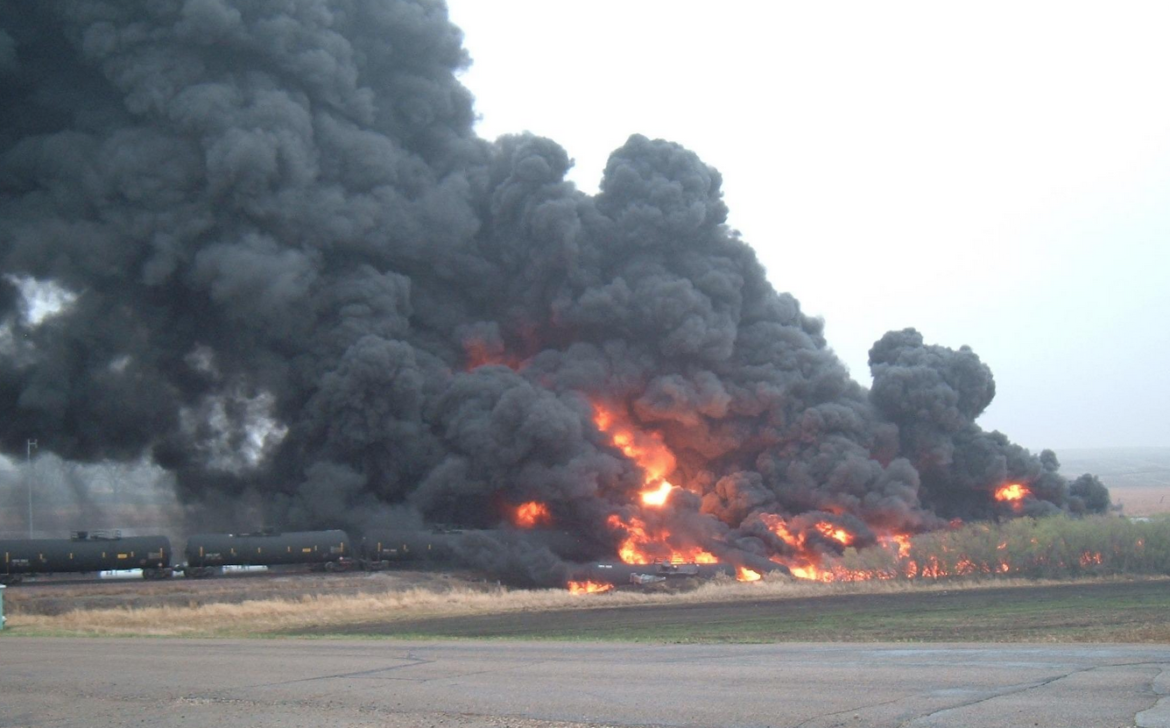 The derailment, near Heimdal, N.D., about 100 miles northeast of Bismarck, was at least the sixth major derailment to occur in North America this year. There were no injuries.

this morning about a half mile from my home...

Posted by Jennifer Willis on Wednesday, May 6, 2015

The accidents have spurred politicians, advocacy groups and citizens to plead for the federal government, railroads and oil companies to improve the safety of the trains.

Pennsylvania is a main destination for Bakken crude oil because of oil refineries housed in Philadelphia and other East Coast cities. About 60 to 70 trains pass through the state each week hauling millions of gallons of oil.

“Today’s incident is yet another reminder of why we issued a significant, comprehensive rule aimed at improving the safe transport of high hazard flammable liquids,” Sarah Feinberg, Federal Railroad Administrator, said in a statement. “The FRA will continue to look at all options available to us to improve safety and mitigate risks.”

The new rules announced last week by the U.S. Department of Transportation includes a tougher standard for tank cars that haul flammable liquids. Crude-by-rail transport has increased by 4,000 percent since 2008 because of a boom in North American oil production.

McClatchy reporter Curtis Tate laid out the situation bluntly when he said the latest derailment in North Dakota “demonstrates again how oil by rail, which has expanded dramatically in just a few years, has outpaced the ability of industry and regulators to ensure the product moves safely.”

The derailment of the BNSF-operated train set fire to several tank cars built to tougher industry standards, according to federal officials. The cars, CPC-1232s, were built after 2011 and are supposed to be less prone to puncture than older tank cars often used to haul crude oil. The cars have lost their loads and exploded in other accidents this year, including on a CSX-operated train in Mount Carbon, W.Va., in February.

Under the new DOT rules, the cars involved in this latest crash, CPC-1232s, will be allowed to stay in service another five to eight years. They’ll then be required to be replaced or retrofitted to meet newer federal safety standards.

The older tank cars, DOT-111s, which have been the main worker bees in the crude-by-rail uptick, have to be retired earlier, by 2018, according to the rules. These cars have had problems for decades and have been involved in several fiery crude oil train derailments, including the accident in Lac-Megantic, Quebec in July 2013, where 47 people were killed.

Some safety advocates and lawmakers have said keeping these cars in service is dangerous and they should replaced sooner.

From The New York Times:

“The new rules basically focus on changing these cars in five years, but this will only mitigate the effects of a derailment,” according to Najmedin Meshkati, a professor of engineering at the University of Southern California who focuses on transportation safety. “But we should be more focused at this point on the root causes of the accidents, on why the trains are derailing, and develop some leading indicators on those.”

Oil companies and railroads, however, say that phasing out cars too quickly will result in shortages of tank car capacity and hinder the flow of oil from North Dakota. Tank cars are typically owned by oil shippers, not railroads.

U.S. Senator Bob Casey (D-Pa.) announced last week that he’s co-sponsored a bill with six other Democrats that would create a fee for the use of the older DOT-111s. It would start at $175 per car, per shipment and increase annually.

The new rules require railroads to share information on the shipment of crude oil with emergency responders, but state and federal open records laws could exempt that information from getting to the public, the senators wrote in the letter.

The cause of Wednesday’s derailment is not yet known.