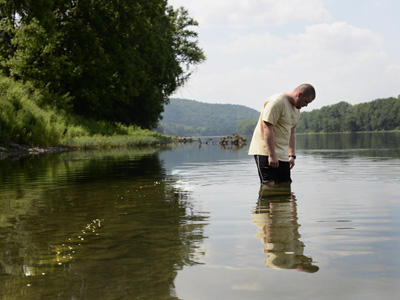 Photographer Nina Berman is no newcomer to the field. Her book Purple Hearts – Back from Iraq explored the physical and psychological impact of war through portraits of wounded veterans.

Another book, Homeland, looked at the militarization of American society following September 11.

She has exhibited and lectured all over the world and is currently an associate professor teaching photography at Columbia University’s Graduate School of Journalism.

She first heard about fracking, a method of drilling into shale to retrieve natural gas, in late 2009 and soon after began making regular trips to Pennsylvania from her home in New York City.  She was challenged by the complexity of the subject and the changing landscape from week to week.

“You can drive around Marcellus Shale country and see nothing,” she said. “How do you shoot the impact?”

Berman collaborated with five other photographers as part of the Marcellus Shale Documentary Project. A show including the work of all six photographers will open on October 11 at Pittsburgh Filmmakers. Each of the six shot a different area of the state, with Berman focusing on the northeastern section of Pennsylvania, shooting environmental portraits and landscapes.

“Just shooting a rig during daylight wasn’t photographically interesting to me,” she said.  But at night, the landscape changed.  Methane flaring turned back roads orange, and the night sky at long exposures seemed on fire. Industrial lights from well pads cast an artificial glow on nearby homes, creating effects that, to Berman, were both ominous and entrancing.

In her environmental portraits, she looked for physical evidence of impact and the psychological stress that comes from losing control of land and resources.

“The people were not amputees, but they have a familiar anxiety in their eyes,” she said. “They felt like those soldiers. Their bodies were compromised.”

Some of them don’t know if they’ll ever have clean water to drink again or whether their ailments are temporary or permanent.

Berman said she was surprised that there was so little hostility toward the lease holders.  Even those who are leaving the area, don’t seem to blame the people who’ve leased their land, they mainly blame the industry,  she said.

“For many people, Marcellus Shale drilling has been a great thing for their families, for their income,” she said. “In this economy, people are willing to do anything to have work.”

If there was one disappointment in the project, Berman said, it was the inability to get the gas industry to cooperate, to allow any in-depth photography of their operations.

She did photograph an annual picnic put on by Cabot Oil & Gas Corp. in Susquehanna County, Pa., where several thousands residents showed up for the third annual event.

As for the collaboration of six photographers, Berman was pleased with the sharing of information and the feeling that she wasn’t the only one out there tackling the topic.

Other issues about fracking that interest her are the mining of frack sand in Wisconsin and the water issue in Colorado, where farmers are bidding against frackers for water.

Outside of those topics, “I’m not sure what more I can do photographically on the subject,” she said.