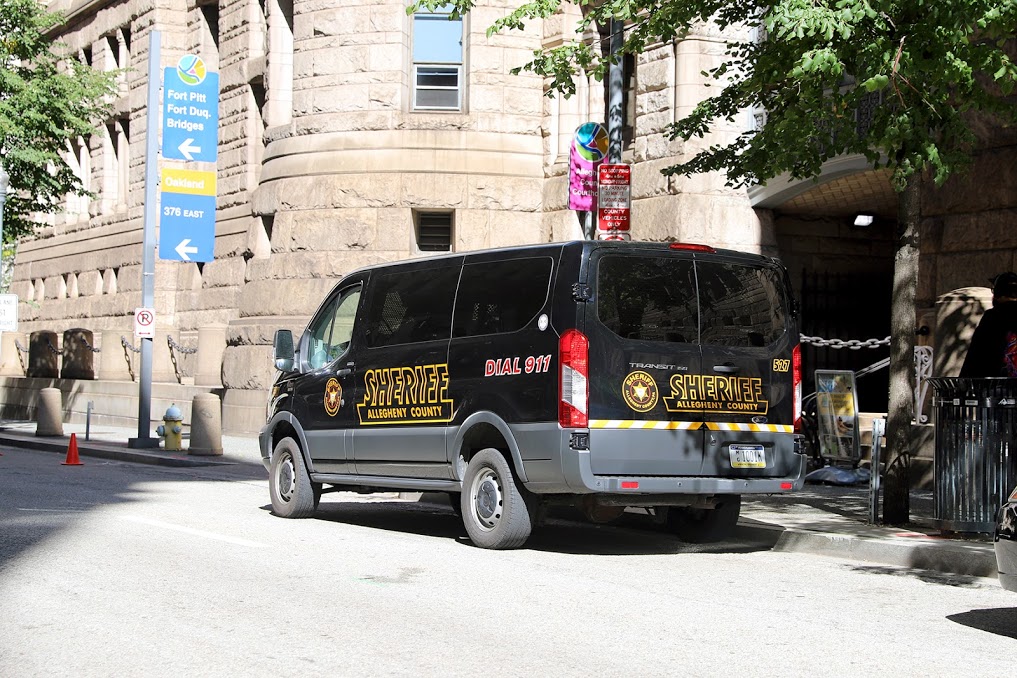 “The bottom line here is, we’ve experimented and looked at this stuff, because that’s what I’m supposed to do. But we never bought any of it,” Sheriff William Mullen said in a July interview with PublicSource.

Policies around facial recognition have been the center of local and national conversations in recent months. On Tuesday, Pittsburgh City Council will vote on a bill that would regulate the use of facial recognition technology. The bill would apply to city government, not county entities like the sheriff’s office. Cities like Portland, Boston and San Francisco have banned the technology outright.

PublicSource requested any records relating to the trial, exploration or acquisition of facial recognition technologies by the sheriff’s office since the beginning of 2017. Records provided indicate that earlier this year, the Allegheny County Sheriff’s Office considered equipping surveillance cameras at the Allegheny County Courthouse in downtown Pittsburgh with facial recognition capabilities but decided against it.

Email records show correspondence in March between Commander Charles Rodriguez and a sales manager of the identification and security solutions vendor IdentiSys Inc. about a facial recognition system made by company Eyemetric.

Rodriguez and Stephen Hodzic, listed at the time as the sheriff’s office accreditation and grants manager, also discussed the technology. Hodzic suggested applying for a grant to purchase the system in an email to Mullen, email records indicate. 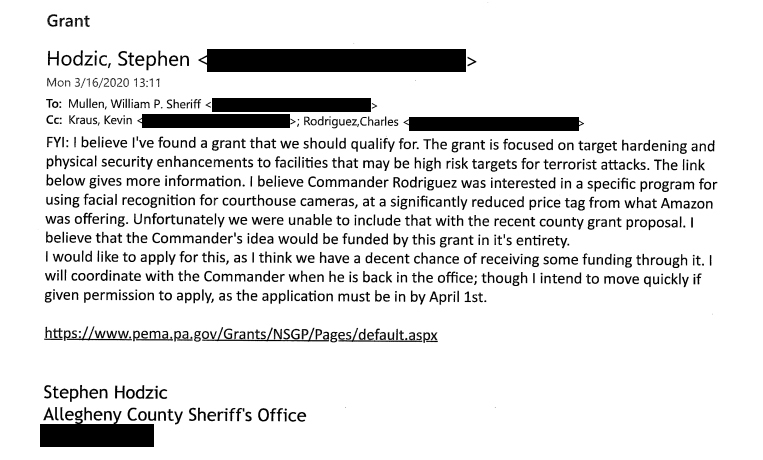 A March 2020 email from Accreditation and Grants Manager Stephen Hodzic to Sheriff William Mullen and Commander Charles Rodriguez. (Excerpts of emails provided by the Allegheny County Sheriff's Office. Email addresses have been redacted by PublicSource.)

According to Mullen, neither the grant nor the technology was pursued. “We don’t want to act like Big Brother,” Mullen said in a PublicSource interview. He said his office was considering equipping the courthouse cameras with facial recognition to identify wanted individuals or potential terrorists who may attempt to enter the courthouse. He ultimately decided against it, he said, because the technology is expensive, can be inaccurate and might discourage some witnesses from entering the courthouse, such as individuals with low-level warrants. 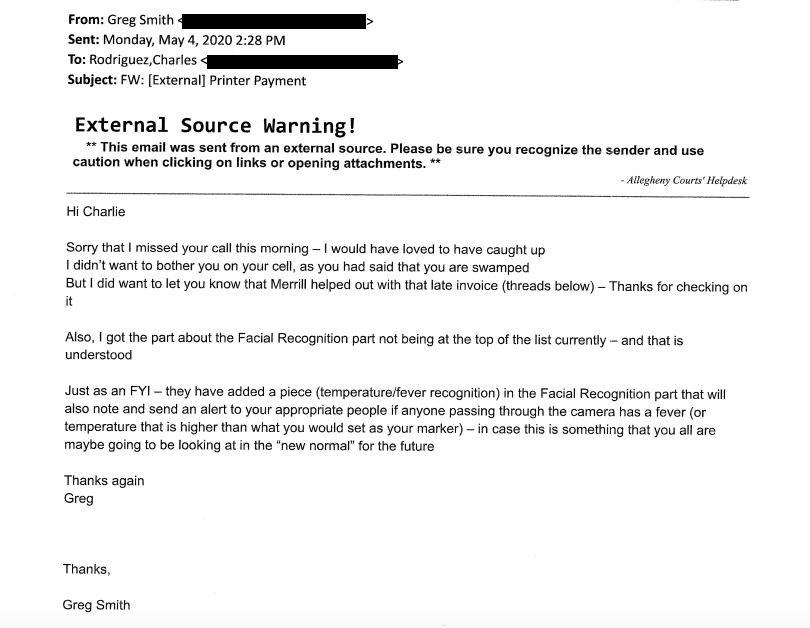 A May 2020 email from an IdentiSys Inc. employee to Commander Charles Rodriguez. (Excerpts of emails provided by the Allegheny County Sheriff's Office. Email addresses have been redacted by PublicSource.)

The potential system for the courthouse cameras is only the latest in the office’s hunt for new technologies. Between February 2018 and January 2020, employee Hodzic researched facial recognition technologies by multiple companies. Records do not indicate that any of the products were acquired.

The technologies considered between February 2018 and January 2020 include:

“What I’m trying to do is take facial recognition technology and put it to use in real time scenarios,” Hodzic wrote in a 2018 email to an employee of the intelligence company Marinus Analytics. “Our deputies have the ability to take pictures with their mobile devices, upload the picture to a database, and then run the photo through a database to see if there is a match for an active warrant,” he continued, referring to the state JNET database, which is available to all law enforcement agencies in Pennsylvania and has facial recognition capabilities. “What I would like to do is automate this process as much as possible and to minimize or eliminate the use of taking the picture with a mobile device that makes it obvious a picture is being taken. Ideally we would use smart glasses, or something to that effect.”

A May 2018 email from Stephen Hodzic to an employee of intelligence company Marinus Analytics. (Excerpts of emails provided by the Allegheny County Sheriff's Office. Email addresses have been redacted by PublicSource.)

While the sheriff’s office did not purchase any of the programs it considered, Mullen said exploring new technologies is his responsibility, and his office will continue to do so.

Jonathan Thompson, the executive director and CEO of the National Sheriff’s Association, estimated that several dozen sheriff’s offices throughout the country have begun using facial recognition. “What we see is that it’s being used more reliably, and that there are a number of agencies — small, medium and large — that are using it,” he said.

Thompson said facial recognition is a useful investigative tool. “Nobody can dispute that it makes communities more safe,” Thompson said. “It simplifies law enforcement duties, it simplifies the research process, it saves money, it saves time.”

Yet the technology is controversial. While facial recognition has been criticized for less accurately identifying people of color and women, Zack Lipton, an assistant professor at CMU whose research includes machine learning and its impact on social systems, called the focus on facial recognition’s accuracy a “distraction” from a bigger problem.

“Imagine the technology is 100% accurate for everyone all the time. I think there’s still the question of, well, what’s going to happen if you go and stick surveillance technology on every single street corner in every public place and arrest everybody that has a warrant? Even if the technology never makes a false positive, what are the effects of that?” Lipton said.

Mullen expressed mixed feelings on facial recognition. “It’s a great idea, but there’s a slippery slope there,” Mullen said, emphasizing the need for total accuracy. “Once that technology becomes very clear and affordable, maybe we would use it. But I’m not out here to take away people’s constitutional rights,” he said.

Josh Williams, a Ph.D. student at CMU who researches the impact of algorithmic decision-making, also sees the technology as potentially being a ‘slippery slope.’

“I feel like it’s a nice idea to be able to quickly identify people who may be harmful to whoever’s at the courthouse that day. I think one of the biggest issues is… how do you decide who to put on these lists?” he said, referring to the watch lists that some companies allow users to create. “...Because this technology would already be there, it wouldn’t be hard if a different sheriff with a different mindset said, ‘I want to start including people with outstanding warrants.’”

Mullen said the sheriff’s office occasionally uses facial recognition through the statewide database JNET, which includes photos from PennDOT driver’s licenses, prisons and more, though it’s typically not necessary. “We use it if we’re looking for somebody. We’ve used it sparingly, but we do use it,” he said.

Because of revenue reductions linked to the pandemic, the sheriff said acquiring facial recognition is off the table — for now, at least.

“[I]f they come up with something that was extremely good, comparable to DNA, then we would probably try to get it,” he said. “But even then, I just don’t know.”

“We talk about the accuracy because it’s something concrete and demonstrated... That argument will eventually, if not concretely disappear, it will lose some of its potency,” he said. “...I think in general there’s this broader question of, ‘How comfortable are we with surveillance?’”